4Department of Anesthesiology and Critical Care, Perelman School of Medicine at The University of Pennsylvania, Philadelphia, PA, USA

Methods: C57 mice (N = 165) were randomly divided into 19 groups. The tail flick test was adopted to measure the antinociceptive effects of the tested agents. The mice were divided into saline and drug groups to investigate the dose-dependent analgesic effects. Each drug was administered at fixed doses alone and in combination with one of three doses of a second drug.

Dexmedetomidine is a potent and highly selective agonist of α2-adrenergic receptors with analgesic properties against acute inflammatory pain [1], postoperative pain [2, 3], and even neuropathic pain that is unresponsive to opioid analgesics [4]. It has also been widely used in clinical settings as an adjuvant for conscious sedation [5–7]. Previous reports have revealed that dexmedetomidine could reduce opioid requirements and that there is a synergistic effect when dexmedetomidine and morphine (a full mu opioid receptor agonist) are administered together [8, 9]. However, it is unclear whether a synergistic or additive effect can be observed when dexmedetomidine is co-administered with a partial mu receptor agonist. Dezocine, a partial mu opioid receptor agonist and kappa opioid receptor antagonist, produces potent analgesic effects on acute and chronic pain [10–14]. Our recent reports and other studies have suggested that dezocine is at least as effective as morphine and can be used to control moderate to severe pain, such as postoperative pain [15, 16]. Since it is a partial mu opioid receptor agonist with potential ceiling effects on its responsive receptor, it could be used as a tool to investigate the potential additive or synergistic effects on pain with other medication(s).

In the present study, we investigated the effect of the intrathecal administration of dezocine and dexmedetomidine, two drugs widely used in the perioperative environment, on acute pain conditions via tail flick assays in mice to demonstrate that dezocine and dexmedetomidine have additive or synergistic analgesic effect on nociceptive stimulation. 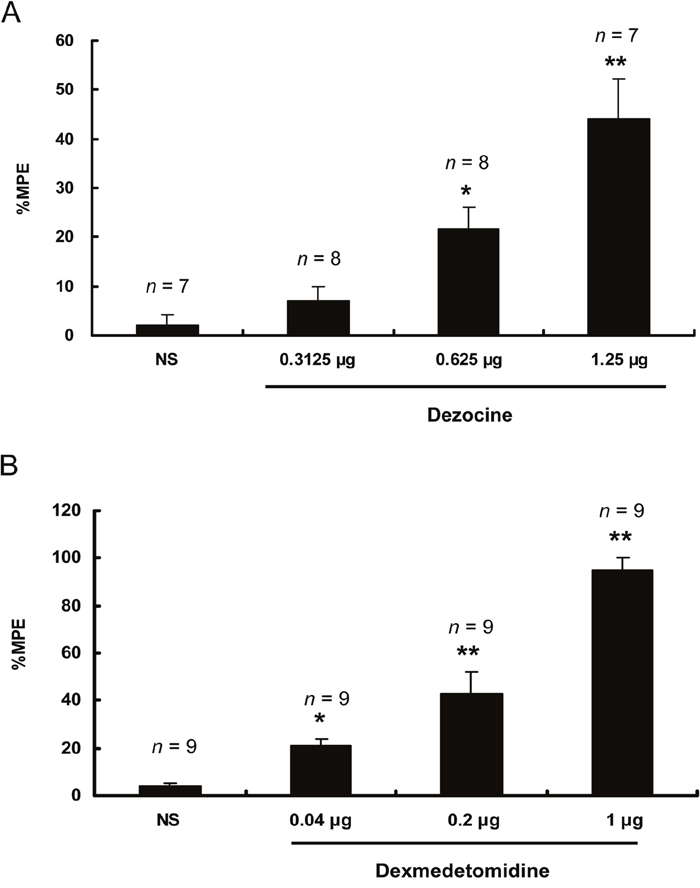 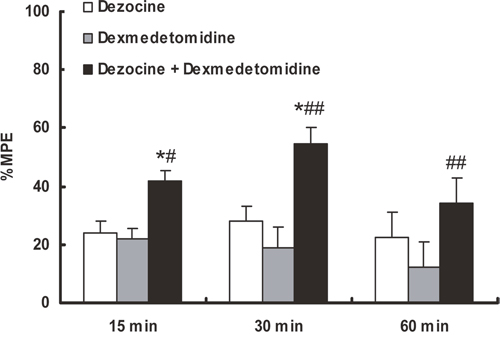 Postoperative pain is the most frequently encountered complaint in postoperative units, and overdoses of opioid analgesics increase the incidence of respiratory depression, hypoxia, and even cardiac arrest. Multi-model analgesic strategies not only reduce the opioid requirement but also reduce the side effects of each medication component.

Pharmacological intervention remains the mainstay for the control of acute pain. In this study, we not only demonstrated that intrathecally administered dezocine or dexmedetomidine alone dose-dependently increased the pain threshold of nociceptive heat stimulation but also found that when added to a fixed dose of dezocine, dexmedetomidine dose-dependently potentiated the analgesic effect of dezocine. When added to a fixed dose of dexmedetomidine, dezocine potentiated the analgesic effect of dexmedetomidine in a dose-dependent fashion. Moreover, we found that the combined use of dezocine with dexmedetomidine produced an effect that was greater than either of their individual effects alone and that was similar to, but not greater than, the sum of their individual effects. Therefore, we deduce that the effect produced by these two drugs, at least at the present doses, is additive rather than synergistic or antagonistic, although we cannot rule out the possibility of other interaction patterns at very low or very high doses.

Once known as a mu opioid receptor antagonist and kappa opioid receptor agonist, dezocine has recently been recognized as a weak mu opioid receptor agonist and kappa opioid receptor antagonist, with an inhibitory effect on the re-uptake of noradrenalin and serotonin [10, 11, 17, 18]. Several reports have suggested that dezocine possesses a potent analgesic effect, and thus, it has been used in perioperative pain management [19, 20]. It has been demonstrated that dezocine’s analgesic effect at a dose of 10 mg is the same as that of either 50 mg of meperidine or 10 mg of morphine [14]. However, there have been no reports regarding the effect of the interaction between dezocine and the α2-adrenergic receptor agonist dexmedetomidine on acute nociception when co-administered intrathecally. Since the use of opioids combined with other medication(s) remains a common practice to control surgical pain, an understanding of the interactive effects of the drugs could be beneficial to patients by enhancing analgesia and reducing side effects. In this study, we discovered that intrathecal co-administration of dexmedetomidine and dezocine produced additive analgesic effects, indicating that each drug acts through different receptors in the spinal cord, which is consistent with the known pharmacological effects of both medications.

Dexmedetomidine and dezocine belong two different categories of medications with completely different mechanisms involving different receptors related to pain. Using an additive/synergistic assay, we demonstrated that dezocine combined with dexmedetomidine produced an additive, but not an antagonistic or synergistic, effect on the tail flick test in mice. Thus, it is predicted that dexmedetomidine could reduce the requirements of opioids for analgesic purposes. While both medications produce analgesic effects through receptors in the brain, they also have targets in the spinal cord. This study clearly indicates that they can generate additive effects at the spinal cord level. Although both opioid receptors and alpha-adrenergic receptors belong to the G protein-coupled receptor family, they play different roles in pain perception. Thus, an additive analgesic effect is somewhat more likely than other interaction patterns. While the analgesic effects of the two drugs are additive, the drugs are not interchangeable. Studies have indicated that there is a synergistic potentiation of antinociceptive effects mediated by morphine and clonidine (an agent similar to dexmedetomidine) [21, 22, 23], although there have been reports showing that adding dexmedetomidine to spinal anesthesia could result in longer motor and sensory blocks than the addition of narcotics [24]. The major difference between morphine and dezocine as pain medication is that morphine is a pan-agonist that activates all the opioid receptors, including kappa opioid receptors, while dezocine is a partial mu receptor agonist and kappa opioid receptor antagonist. It is unclear whether dexmedetomidine interacts with opioid receptors in the spinal cord. If dexmedetomidine interacts with opioid receptors, especially kappa opioid receptors, as a full agonist, it would be potential mechanism to explain why morphine and dexmedetomidine have synergistic effects. Molecular target studies need to be performed to investigate that possibility. In clinical practice, additive effects may be more desirable than synergistic effects, since they are more predictable, making it easier to avoid undesirable side effects. However, the present results were obtained in animal models, and clinical studies are necessary to further elucidate the interactions and the potential side effects, such as over-sedation or respiratory depression, of this combination of drugs.

Animal use and care, as well as the experimental protocols, were reviewed and approved by the Ethics Committee of the First Affiliated Hospital, Zhejiang University School of Medicine. These studies were also consistent with the ethical guidelines for the investigation of experimental pain in animals [25]. All possible efforts were made to minimize the number of animals used and their suffering.

Male adult C57 mice (N = 165; body weight ~25 g) were obtained from the Animal Center of the Chinese Academy of Sciences (Shanghai, P. R. China). The animals were housed with 10 mice per cage with water and food available ad libitum and were maintained under a 12-h light/12-h dark cycle with the lights turned on at 08:00 AM.

The tail withdrawal latency was assessed as previously reported [26]. Briefly, the mice were gently restrained along the edge of a table, and their tails were immersed in water, which was maintained at 52°C using hot water baths. The latency to tail withdrawal was measured using a hand-held stopwatch. One hour after the baseline was determined, medications (5 μl in total volume) were intrathecally administered via direct lumbar puncture, according to the procedure described by Hylden and Wilcox in 1980 [27]. Briefly, a modified 25 μl micro-syringe was inserted between the L5 and L6 vertebrae of conscious mice. A sudden flick of the tail indicated the success of the puncture into the subarachnoid space. The drug solution or vehicle was injected over a period of 30 s. The tail withdrawal latency was re-determined at 15, 30 or 60 min after drug administration. To avoid tissue damage, a maximum score (100 %) was assigned to the animals that did not respond within 10 s. Antinociception was calculated by the following formula: % maximum possible effect (MPE) = 100 × (test latency - baseline latency) / (10 - baseline latency) [28].

The data are expressed as the mean ± standard error of the mean (SEM) and were analyzed with one-way analysis of variance (ANOVA), followed by the least significant difference test for multiple comparisons (LSD). To test additivity in the one-dose experiments, the mean values and standard variations of the combined single-drug groups were compared with the values of the respective combination group using independent t-tests. A P-value < 0.05 was considered statistically significant.

Yao YX and Sun JL contributed to the study design. Yao YX and Huang YQ conducted the study. Guo SH and Zhu SM collected and analyzed the data. Yao YX drafted the manuscript. Liu R made critical revisions of the manuscript. All authors read and approved the final manuscript.

8. Kabalak A, Ekmekçioğlu E, Ceylan A, Kahveci K. The synergistic antinociceptive interactions of morphine and dexmedetomidine in rats with nerve-ligation injury. Hippokratia. 2013; 17: 326-31.

31. Morgan D, Cook CD, Smith MA, Picker M. An examination of the interactions between the antinociceptive effects of morphine and various mu-opioids: the role of intrinsic efficacy and stimulus intensity. Anesth Analg. 1999; 88: 407-13.