Lung cancer remains the primary cause of cancer-related mortality worldwide. Several treatment modalities are available for lung cancer, including surgery, radiation, and chemotherapy. Among the chemotherapeutics available, afatinib has been shown to be effective for those with epidermal growth factor receptor (EGFR) mutation-positive lung adenocarcinoma. Herein, we analyzed the factors affecting the prognosis of patients who received afatinib as a first-line therapy for advanced EGFR mutation-positive lung adenocarcinoma in the real-world setting. Patients who received afatinib as a first-line therapy and were reimbursed by the National Health Insurance were recruited in this study. Data on patient characteristics and treatment courses were collected. In total, 259 patients were enrolled (median follow-up, 22.0 months). Of them, 82 (31.7%) were identified to have brain metastases at baseline, which were associated with poor Eastern Cooperative Oncology Group performance status, high incidence of central nervous system progression, and short overall survival. However, the results of our analysis showed that overall survival was not affected by reductions in the afatinib dosage or any upfront local treatments for brain tumors. Multivariate analyses showed that brain metastases at diagnosis and treatment response to afatinib are two important prognostic factors for the overall survival of patients with EGFR mutation-positive lung adenocarcinoma.

Lung cancer remains the leading cause of mortality among all malignant diseases worldwide. Despite advances in precision medicine in the past decade, the 5-year overall survival of patients with advanced lung cancer is less than 10% [1, 2]. Several favorable prognostic factors had been discussed in patients with advanced non-small cell lung cancer (NSCLC), including early TNM stage for tumors [1], good performance status (PS) on the Karnofsky Performance Index or the Eastern Cooperative Oncology Group (ECOG) scale [3, 4], female sex [5], young age [3, 4], and non-neuroendocrine characteristics in histology [6].

Mutations in the epidermal growth factor receptor (EGFR) kinase domain of lung adenocarcinoma have been viewed as the most reproducible predictive factor for susceptibility to first-generation EGFR tyrosine kinase inhibitors (TKIs) [7]. Afatinib is an irreversible ErbB family blocker and a second-generation EGFR-TKI, and its efficacy as first-line treatment for patients with advanced EGFR mutation-positive lung adenocarcinoma has subsequently been proven [8-10].

Up to 20% of patients with NSCLC present with central nervous system (CNS) metastases at the time of first diagnosis [11, 12]. The use of any first- or second-generation EGFR-TKIs alone for the treatment of brain metastases in patients with EGFR mutant-positive lung adenocarcinoma showed a favorable cerebral response rate of > 50% [13-16]. The efficacy of EGFR-TKIs for controlling brain metastases has been shown to be similar to that of surgical resection, stereotactic radiosurgery (SRS), or whole-brain radiotherapy (WBRT) [17, 18].

In our previous study [19], brain metastases were found to be a significant prognostic factor for progression-free survival (PFS) in patients with EGFR mutation-positive lung adenocarcinoma receiving afatinib as first-line treatment. Well-designed, randomized controlled trials can prove the efficacy of the study drugs in terms of response rate and PFS, but a single-center study can demonstrate the overall survival (OS) benefit of the drug in the study population. Prognostic factors can be studied in real-world patient settings. As such, we extended our previous research [19] and analyzed a real-world cohort of patients treated with first-line afatinib. Further, we investigated the prognostic factors in this specific population.

Demographics and clinical variables of the study

This is an extended study from our previous cohort research, and part of the results had been published [19]. We retrospectively recruited this study cohort from the Taiwan National Health Insurance approved list of afatinib applicants from May 2014 to June 2017 at the National Taiwan University Hospital, a tertiary medical center in Taiwan. A total of 282 patients were screened, and 259 met the inclusion criteria of advanced EGFR mutation-positive lung adenocarcinoma with afatinib as a first-line treatment (Figure 1). The patients’ median age was 62 (range, 28–87) years. A total of 157 patients (60.6%) were women, and 187 (72.2%) were never smokers (Table 1). Most patients had relatively good PS, and only 19 patients (7.4%) had an ECOG performance score of ≥ 2. The enrolled patients were divided into three groups according to their EGFR mutation status as defined in the previous study: Group 1, “classical” mutation; Group 2, complex mutation with classical mutation; and Group 3, rare mutation with or without complex mutation. Majority of the patients belonged to Group 1 (n = 207, 79.9%). A total of 151 (58.3%) patients had exon 19 deletion, while 53 (20.5%) had p.L858R mutation. 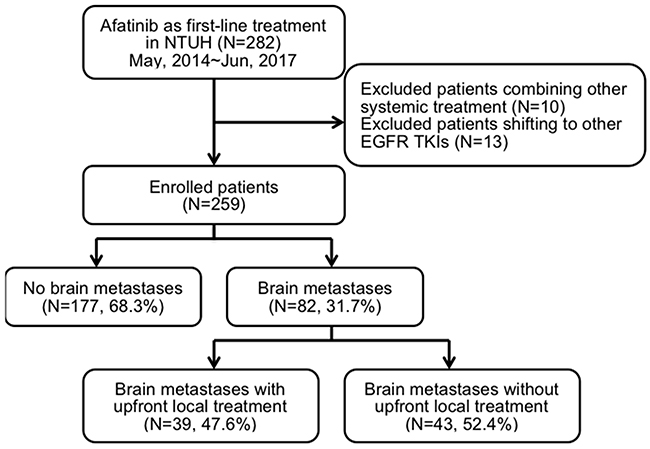 Table 1: Clinical characteristics and comparison of patients receiving afatinib according to brain metastases

Table 2: Comparison of afatinib dose and effects according to brain metastases 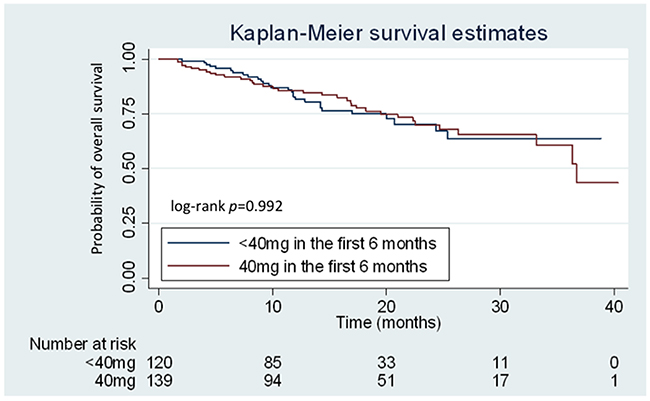 Figure 2: Kaplan–Meier curves for overall survival (OS) according to the treatment dose of afatinib. Patients receiving 40 mg and < 40 mg of afatinib during the first 6 months are represented by the red and blue lines, respectively.

Of the 259 eligible patients, 82 (31.7%) were identified to have brain metastases at baseline. Patients were further subdivided into two subgroups according to the presence or absence of brain metastases at the initial clinical staging workup. No significant differences in various clinical characteristics, including age, smoking status, and EGFR mutation patterns, were observed between the two subgroups. Patients with brain metastases had poorer ECOG PS compared with those without brain metastases (P < 0.001) (Table 1). However, the initial dose preference (40 mg or < 40 mg of afatinib) and using 40 mg dosage in the entire first 6 months were not different between the two groups (P > 0.05) (Table 2). Meanwhile, patients with initial brain metastases had significantly higher incidence of central nervous system (CNS) progression (P < 0.001) (Table 2) and a shorter OS than those without brain metastases (median: 33.8 months vs. not reached, respectively; P = 0.005; hazard ratio [HR]: 2.03; 95.0% CI: 1.23–3.35) (Figure 3). 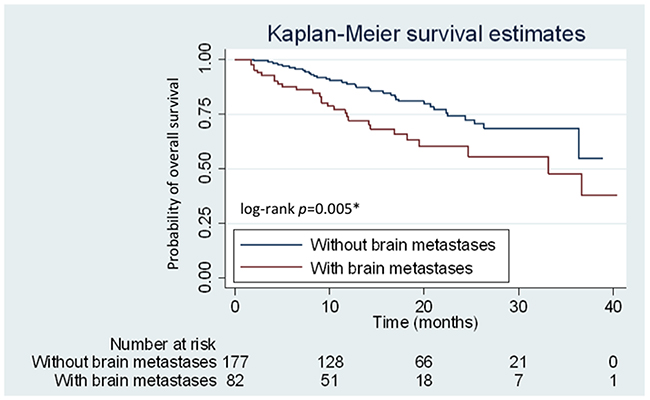 Eighty-two patients (31.7%) presented with brain metastases at the time of initial diagnosis (Figure 1), and 6 (7.3%) of them presented with leptomeningeal carcinomatosis. To determine the clinical factors affecting survival, we subdivided these 82 patients according to whether or not they received upfront local treatment to brain lesions (Table 3). In terms of clinical characteristics, no significant differences in age, smoking status, and EGFR mutation patterns were found between these two groups. Patients with brain metastases who initially presented with poor PS, neurological symptoms, > 3 cm brain tumor, or intracranial hemorrhage tended to receive upfront local treatment.

Table 3: Characteristics of patients with brain metastases (BMs) who did and did not receive upfront local treatment for brain lesions

bSignificant weight loss of >10.0% within 6 months of diagnosis.

eRare mutation with or without complex mutation. 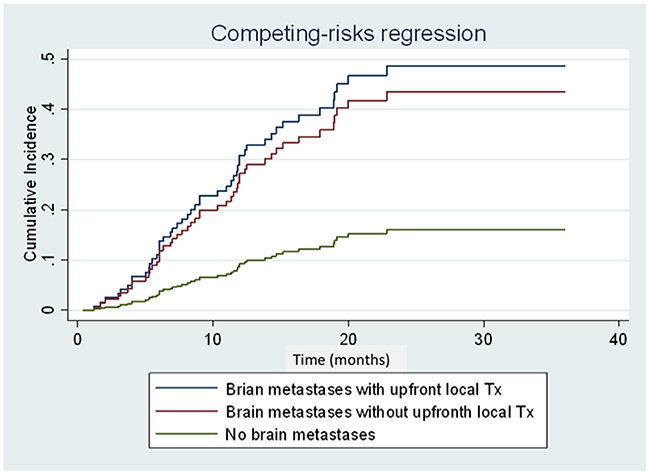 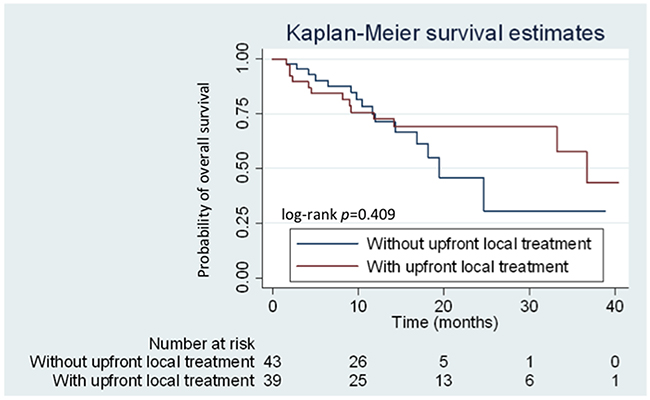 No standard treatment modalities for neurologically asymptomatic brain metastases in patients with EGFR mutation have been established. We analyzed those neurologically asymptomatic patients in our study (n = 54) who received any upfront local treatment (n = 16) and found that such treatment had no significant OS benefit compared with those without upfront local treatment (median OS: 33.1 vs. 19.5 months, respectively; P = 0.728) (HR: 0.84; 95.0% CI: 0.31–2.28).

We used univariate and multivariate analyses to determine the influence of clinical factors on OS of afatinib-treated patients in our real-world cohort study. The results of multivariate analyses showed that clinical variables, including sex, smoking status, EGFR mutation status, and 40 mg or < 40 mg of afatinib dose in the first 6 months, were not associated with OS, and the most significant prognostic factors influencing OS were existence of brain metastases and treatment responses at initial evaluation (Table 4).

Table 4: Univariate and multivariate analyses of clinical factors for overall survival in a real-world cohort

cRare mutation with or without complex mutation.

In conclusion, brain metastasis is associated with poor ECOG PS, high rate of CNS progression, and short OS. Brain metastases at the time of the diagnostic stage and the initial treatment response to afatinib are two important prognostic factors for the overall survival of first-line afatinib treated EGFR mutation-positive lung adenocarcinoma.

From May 2014 to June 2017, we subsequently retrieved data of patients with advanced EGFR mutation-positive lung adenocarcinoma receiving afatinib as a first-line therapy at the National Taiwan University Hospital (Taipei, Taiwan). We excluded patients (1) with unknown EGFR mutation status, (2) those in whom afatinib was discontinued and treatment was subsequent switched to other EGFR-TKIs prior to disease progression, and (3) those who received a combination of immunotherapy or palliative chemotherapy prior to afatinib treatment. This study had been approved by the Research Ethics Committee of the National Taiwan University Hospital (Taipei, Taiwan), and written informed consent was waived owing to the retrospective nature of the study.

Of the 282 screened patients, 23 patients were excluded because they received systemic therapy or immune checkpoint therapy concomitantly (n = 10) and afatinib was discontinued and then switched to other EGFR-TKI treatment due to various severe adverse events (n = 13); including 5 severe skin rashes, 5 oral mucositis, 1 refractory diarrhea, 1 paronychia, and 1 interstitial pneumonitis. The clinical characteristics, imaging studies, and medical records of the 259 enrolled patients were consecutively collected until August 2017. Ex-smokers were defined as patients who quit smoking for > 1 year at the time of lung cancer diagnosis. ECOG scale was used to determine the patients’ PS [26]. All patients with stage IV lung adenocarcinoma [27] received afatinib as first-line treatment.

Tumor responses to afatinib were evaluated and recorded by primary care physicians according to the Response Evaluation Criteria in Solid Tumors (version 1.1) [28]. Imaging studies, including computed tomography of the chest and computed tomography/magnetic resonance imaging of brain, were routinely followed up at a 3-month interval. PFS was defined as the period from starting afatinib treatment to the point of radiologically documented disease progression. OS was defined as the duration from commencing afatinib treatment to death from any cause.

Data on the EGFR mutation status of patients were collected from formal pathology reports and referral data from other hospitals. Cancer specimens could be obtained from primary lung adenocarcinomas, tissues from metastatic sites, or malignant pleural effusion cell blocks.

In our study, categorical variables were compared using Pearson’s chi-squared tests for. OS was calculated using the Kaplan–Meier method and compared using the log-rank test. We also used cumulative incidence risk to analyze the first events of CNS progression. Other first events of non-CNS progression, death or loss to follow-up beyond progression were analyzed as competing risks. HRs were used in Cox proportional hazard models, and the corresponding 95% CIs were used to compare the OS between the treatment subgroups. The Statistical Package for the Social Sciences for Windows software version 18.0 (SPSS Inc., Chicago, IL, USA) were used for all statistical analyses. OS and cumulative incidence curves were plotted using STATA for Windows software version 14.0 (StataCorp, College station, TX, USA). A two-sided P < 0.05 was considered statistically significant.

27. Edge SB, Compton CC. The american joint committee on cancer: the 7th edition of the AJCC cancer staging manual and the future of TNM. Annals of surgical oncology. 2010; 17:1471–4.