An analysis of whether sleep disorder will result in postpartum depression

Depression has displayed an increasing trend in recent years. Pregnancy increases the chance of developing depression, namely, postpartum depression (PPD). From pregnancy and childbirth to postpartum, women encounter not only enormous physiological changes but also great psychological impacts. The prevalence rates of PPD are approximately 13.8%–19.8% in the USA [1]. and approximately 11.6%–25% in other countries [2–4]. Studies in Taiwan have demonstrated that 36.3%–42.6% of pregnant women in the Taiwan area have PPD symptoms [5–7]. Therefore, the chance of developing PPD is high for women in Taiwan, and this problem requires urgent attention. In the serial editions of Diagnostic and Statistical Manual of Mental Disorders (including DSM-III, DSM-III-R, DSM-IV, DSM-IV-TR, and DSM-5) noted that PPD is defined as the onset of mood disorders starting at postpartum 4 weeks. At least 5 symptoms appear every day: depressed mood, obvious lack of interest in usual activities, a decrease or increase in body weight, insomnia or excessive sleep, slow action or increased activities due to uneasiness, fatigue or decreased energy, feelings of worthlessness or guilt, diminished abilities of thinking or concentration, and occurrence of thoughts of suicide. These symptoms persist for more than two weeks [8, 9]. Some scholars consider that in addition to the mental illness diagnosis and the presentation of symptoms described in the statistical manual, PPD should also cover self-consciousness of being incapable of the roles, functions, and responsibilities of motherhood, feeling guilty, using more invasive or negative methods in child-rearing (even having thoughts and behaviors of hurting the child when having problems with one’s parenting style after birth), changes in the spousal relationship, and the inability to concentrate on routine matters [10–13]. Therefore, identifying methods to reduce the development of PPD is very important.

Studies on PPD have increased in number in the past twenty to thirty years, with most studies focusing on risk factors. A few studies have noted that poor postpartum sleep quality can easily increase the risk of PPD [14, 15]. Sleep troubles in pregnant women not only affect their ability to fulfill their multiple postpartum roles but also negatively influence the development of the parent-child relationship [16, 17]. Current PPD studies in Taiwan mainly focus on nursing care; most studies have investigated the effects of PPD on the quality of life of women from psychological, family, and social perspectives [18–20]. Although numerous studies on sleep quality in Taiwan have been reported, few studies have investigated sleep disorders (SD) using pregnant women as the study subjects.

Currently, few reports on sleep assessment targeting pregnant women during pregnancy exist, and no systemic studies have assessed the association between SD and PPD. Therefore, we used the National Health Insurance Research Database (NHIRD) of Taiwan to perform a follow-up study on whether prenatal SD can increase the development of PPD.

Our study presents that there is no Statistical significance in age, number of births, comorbidities and insured premium both in subjects and control groups. (data not shown). 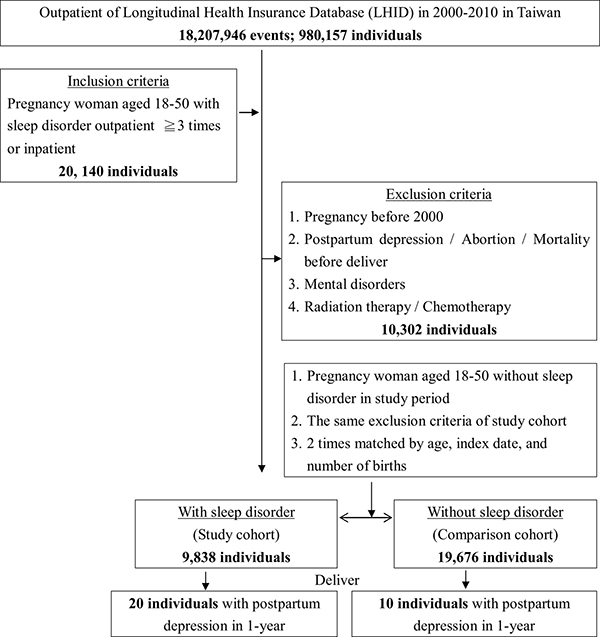 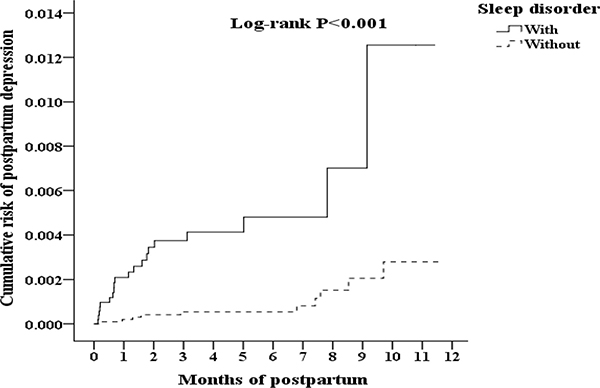 Table 1: Characteristics of study at the endpoint

Table 2 lists the univariate and multivariate analysis results on the influencing factors of PPD. After comorbidity, season, urbanization level, and insured premium (income) were controlled, the chance (risk) of developing PPD in pregnant women with SD was 5.359-fold (P < 0.001) increased compared with the control group (pregnant women without SD).

Table 3: Factors of postpartum depression stratified by variables listed in the table by using cox regression 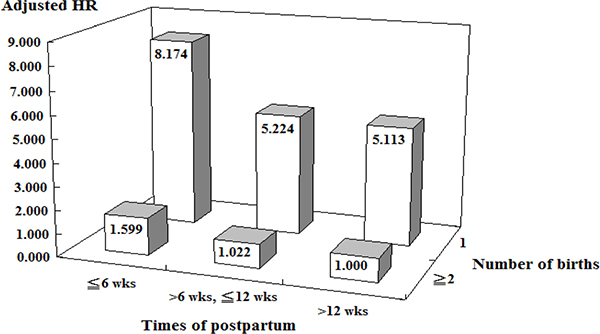 SD are a risk factor for developing PPD in women in Taiwan. SD increased the risk of developing PPD in women (the risk in cases with SD was 5.359-fold increased compared with cases without SD). In addition, regardless of postpartum time (≤ 6 weeks, 6–12 weeks, and > 12 weeks), the chance (risk) of developing PPD was greater than 3.416-fold increased in pregnant women with SD compared with pregnant women without SD. Previous studies revealed that patients with SD are likely aware of bad health conditions or negative emotions, such as working under great stress [15, 21]. Moreover, the majority of studies also indicate that pregnant women are under great stress with their first birth due to physical and mental changes, expectations of newborns, and uncertainty of family and social welfare support [22]. As a result, this study demonstrates that pregnant women experiencing their first birth exhibit increased risks of developing PPD. Reduced sleep quality during pregnancy might be an important risk factor for developing PPD. Therefore, persistent relief of SD is very important.

SD are a defined as difficulty falling asleep, light sleep, and frequent periods of being awake at night with symptoms persisting for at least one month. SD are a common disease and can affect the quality of life of a normal individual [23]. Most current articles focus on the association between SD and pressure, shift work, and reproductive dysfunction as study topics [24–27] but did not perform a similar analysis on the risk of developing PPD caused by SD. This study was the first study in Taiwan relevant to this topic.

This study has the following limitations. First, the health insurance data do not include the variable of the severity of SD. Therefore, relevant data are not available to discuss the severity of SD. Second, the associations between social demographic factors, such as age, number of births, and disease history, and PPD were analyzed. However, other psychological and social variables, such as potential influencing factors including the family support level and the education level of the pregnant women, might also affect PPD; however, these variables could not be further investigated in this study.

This study performed analyses using data from the NHIRD of Taiwan from between January 1, 2000 and December 31, 2010. National health insurance was implemented in Taiwan in 1995. The NHIRD records the medical information of all insured, with a coverage rate of greater than 99% of the Taiwanese population. Therefore, we obtained data from the NHIRD to investigate the association between SD and PPD during this 10-year period. The diagnosis used in the NHIRD is the International Classification of Diseases, Ninth Revision, Clinical Modification (ICD-9-CM).

This study adopted the follow-up study design. New cases of pregnant women who were diagnosed with SD during pregnancy in the database were screened and selected as the study subjects in the study subject group. The study period was between January 1, 2000 and December 31, 2010. For comparison with the subject group, a control group with twice the number of subjects as the subject group with matched age, income, and number of births was selected (pregnant women without a diagnosis of SD).

All study participants were observed from the beginning of pregnancy until the development of PPD (ICD-9-CM 648.4) or until the end of this study on December 31, 2010.

All the authors had no competing interests in this study.

This work was supported in part by grants from National Defense Medical Center, Taiwan (TSGH-C107-004), and Taoyuan Armed Forces General Hospital (AFTYGH-10610,10726), Taiwan. The funders had no role in study design, data collection and analysis, decision to publish, or preparation of the manuscript.