Renal cell carcinoma (RCC) is the urological malignancy with the highest rate of mortality and an increasing incidence worldwide [1]. Clear cell RCC (ccRCC) is the most common form of RCC [2]. Generally, ccRCCs carry genetic insufficiencies of the von Hippel-Lindau tumor suppressor (VHL) and have shown constitutive activation of the hypoxia inducible factors (HIFs). It was previously reported that RCCs expressing HIF2-alpha rather than HIF1-alpha were malignant [3], and that the knockdown of HIF2-alpha induced cell death and/or inhibition of cell growth in RCCs both in vitro and in vivo [3–6].

This study analyzed the mechanism of cell death caused by inhibition of HIF2-alpha in dormant-like/starvation-resistant RCC. The results demonstrated that cell death was induced by tumor necrosis factor (TNF)-related apoptosis-induced ligand (TRAIL) (TNFSF10) [12], and TRAIL-mediated apoptosis was attenuated by HIF2-alpha and c-FLIP. The present study also indicated that higher abundance of TRAIL may be correlated with poor prognosis and has a prognostic value in patients with RCC. 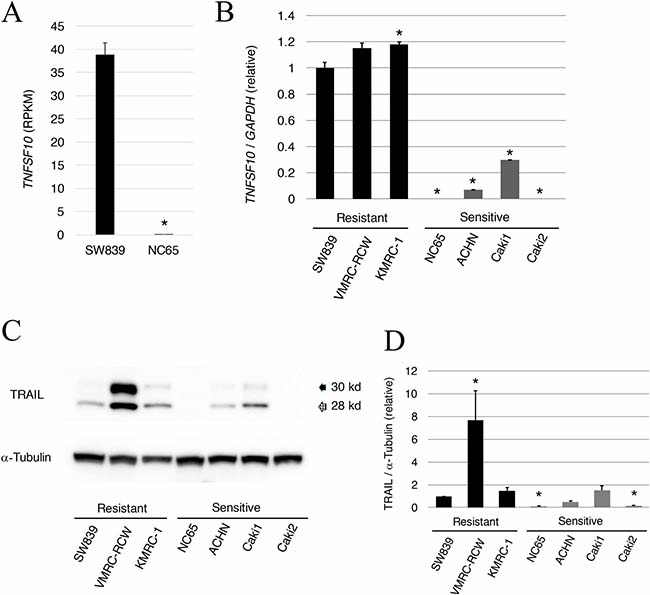 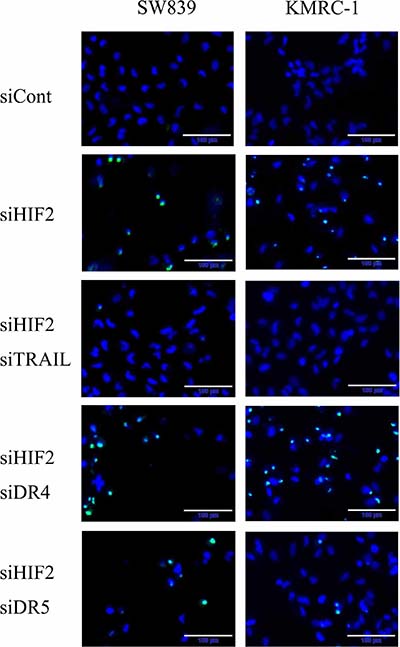 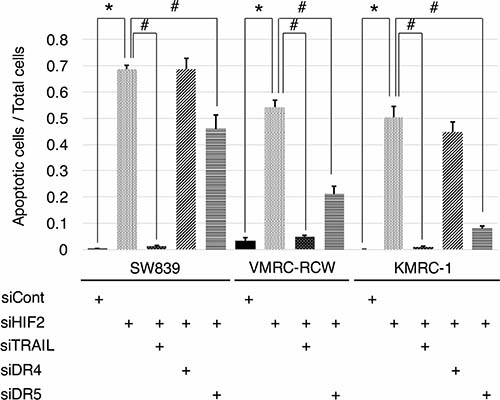 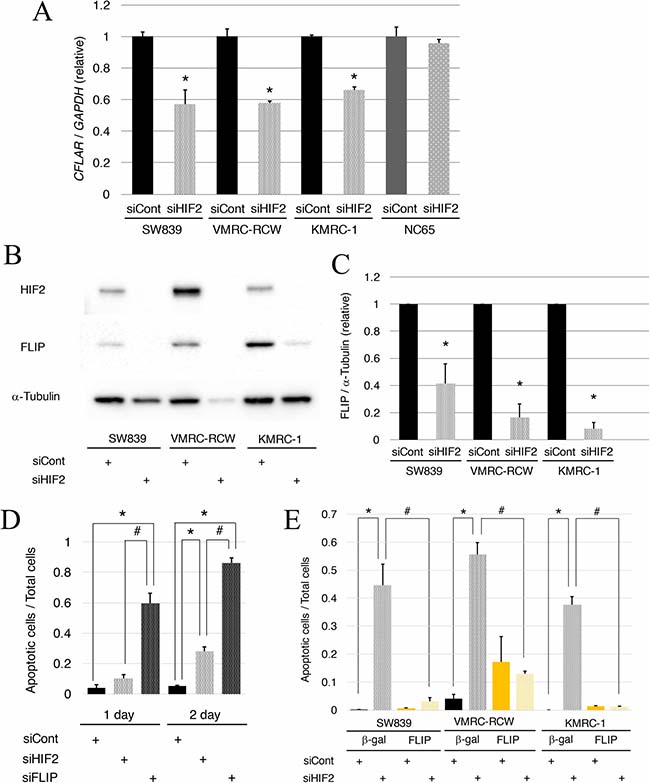 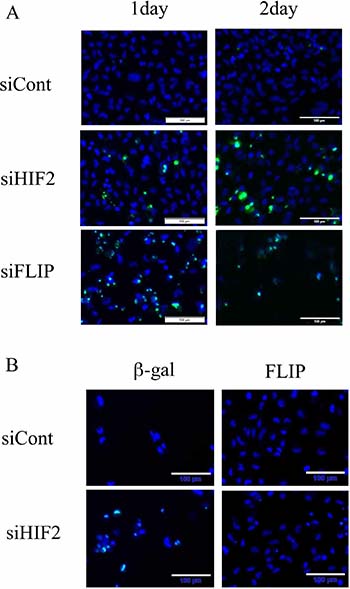 Figure 5: Knockdown of c-FLIP induces apoptosis and its introduction averts apoptotic cell death in the starvation-resistant RCC cell line SW839. (A) Apoptotic signals of CellEvent™ Caspase-3/7 Green Detection Reagent (apoptotic cells, green) and Hoechet33342 (nuclei of total cells, blue) in the starvation-resistant RCC cell line SW839 under 1-day and 2-day treatments with the indicated siRNA reagents (siCont, siHIF2 and siFLIP). (B) Photographic representation of SW839 cells, in which β-gal or c-FLIP was introduced lentivirally, after 2-day treatment with siHIF2. Note that knockdown of c-FLIP induced similar or greater apoptosis, and exogeneous introduction of c-FLIP completely averted apoptosis with siHIF2 in SW839 cells. These are photographic representations of data shown in Figure 4D and 4E.

The role of TRAIL (TNFSF10) expression as a predictor of clinical outcome in patients with metastatic RCC treated with inhibitory agents for tyrosine kinase and/or mTOR in the Cancer Institute Hospital was investigated. The characteristics and demographic data of the 16 patients examined in the cohort are shown in Supplementary Table 2. These patients were classifed into two groups based on the average value of TNFSF10 expression levels (Figure 6); patients with higher TNFSF10 expression levels had significantly shorter survival periods than those with lower TNFSF10 levels (7.3 vs. 30.1 months, respectively) (Figure 6). This comparative analysis suggested that patients with higher TNFSF10 expression were resistant to commonly used agents targeting tyrosine kinase and mTOR. 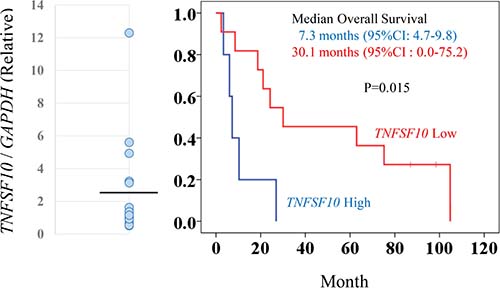 RCCs expressing high levels of TRAIL were associated with poor prognosis. Therefore, expression levels of TRAIL may become a predictive biomarker for the prognosis of clinical outcome in patients with metastatic RCCs. The present investigation was a pilot study involving a limited number of patients treated by various agents. Further clinical studies are warranted to confirm the prognostic value of TRAIL abundance. The findings presented herein were surprising, considering that TRAIL is essentially a ligand associated with apoptosis in cancer cells. The mode of action of abundant TRAIL in dormant-like/starvation-resistant RCCs remains unclear. TRAIL was detected in exosomes prepared from dormant-like/starvation-resistant RCCs (Supplementary Figure 3A). Exosomes were recently reported to contribute to progression of certain types of cancers [17]. Thus, TRAIL-bearing exosomes may contribute to the progression of disease. In the present immunohistochemical analysis (Supplementary Figure 3B), TRAIL was detected with infiltrating lymphocytes in all the tumors, although tumorous TRAIL was found in only 1 out of 30 cases of RCCs. Exosomal TRAIL was hardly detected using immunohistochemistry. Abundance of c-FLIP/CFALR in the tumor was found predominantly in the cases with short survival (Supplementary Figure 3B, lower row) rather than in the cases with longer survival (Supplementary Figure 3B, upper row), and this difference was statistically significant (Supplementary Figure 3C). Therefore, these data suggested that RCCs with poor prognosis may evate TRAIL-induced apoptosis through high expression of c-FLIP, and this may be due to sustainable HIF2-alpha expression.

In conclusion, TRAIL-induce apoptosis was attenuated by c-FLIP following sustainable HIF2-alpha expression in dormant-like/starvation-resistant RCC. Abundance of TRAIL may foster the development of RCCs, and affect their malignancy and prognosis in RCCs (Figure 7). 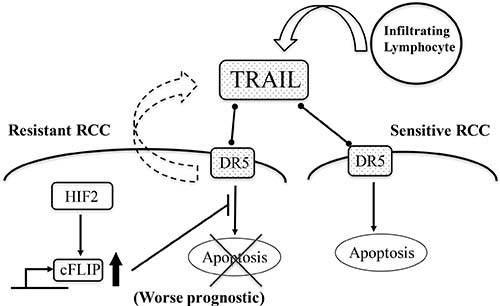 Figure 7: A schematic summary of all experimental results. TRAIL abundance caused by infiltraring lymphocytes and exosomes from starvation-resistant RCC cells induce apoptosis into starvation-sensitive RCC cells; however, the dormant-like/resistant RCCs may evade TRAIL-induced apoptosis, with c-FLIP following sustainable expression of HIF2-alpha. Subsequently, abundance of TRAIL may foster the development of RCCs and affect malignancy and prognosis of RCCs. Thin arrows indicate activation of a target and events. The thick arrow pointing upwards signifies an increase in the levels of the corresponding molecules. The cross signifies inhibition of an event. The bar arrow indicates suppression of a target. Dot arrows indicate molecular interactions. Curved arrows indicate secretion of vesicles.

The medical records of patients with RCC, treated in the Cancer Institute Hospital (Japanese Foundation for Cancer Research, Tokyo, Japan) between 2008 and 2014, were retrospectively reviewed. In all patients, ccRCC was confirmed by pathological diagnosis. Histopathology was reviewed according to the 2004 World Health Organization classification [18]. This study was carried out in compliance with the Helsinki declaration, and was approved by the institutional review board of the Cancer Institute Hospital (2009–1029). Written informed consent was obtained from all patients in this study.

Total RNA was obtained from RCC cells and tissues of patients who had undergone radical nephrectomy using acid guanidinium thiocyanate-phenol-chloroform [19]. Quantitative RT-PCR was performed using the LightCycler® 480 SYBG Master I Mix and LightCycler® 480 System II (Roche Diagnostics, Mannheim, Germany). Gene expression was normalized against the GAPDH gene. Primer sequences are listed in Supplementary Table 3A. All quantification analyses were performed in triplicate.

The data are reported as means ± standard error (SE). The values were derived from at least three replicate experiments. Statistical analyses were performed using the free software R. One-way factorial analysis of variance (ANOVA), accompanied by pairwise comparisons using t tests with pooled standard deviation (SD) was used to compare multiple group means. Student’s t-test (two-tail) was used to compare the means of two groups. A p-value of < 0.05 was considered to denote statistical significance. In the clinical study, overall survival periods were measured from the day of initial administration of the therapeutic agents until the day of disease-specific death. Time-to-event distributions were estimated using Kaplan-Meier curves and statistically analyzed (log-rank test) using the SPSS software (SPSS for Windows, version 17.0, SPSS Inc.).