3Laboratory Medicine and Pathobiology, University of Toronto, Toronto, ON, Canada

Although 80–90% of lung cancer cases are associated with inhaled tobacco smoke carcinogens, 15–25% of patients develop lung cancer without a significant personal history of tobacco use [1–3]. Lung cancer in never smokers (LCNS) (less than 100 cigarettes in their lifetime) is becoming a growing health problem and is now recognized as the seventh cause of cancer-related mortality worldwide [4]. Significant gender, geographical, histo-pathological, molecular and clinical differences are recognized in patients who never smoked when compared to smokers with lung cancer [3]. LCNS occurs more frequently in women and adenocarcinoma histology predominates. Its incidence is higher in certain geographical regions including Asia where the lung cancer incidence in never smoking Asian women is 3–4 fold higher when compared to the age-adjusted non-smoking female population of Western countries [5, 6]. Certain genomic changes such as mutations of the epidermal growth factor receptor (EGFR), human epidermal growth factor 2 (ERBB2), or v-Raf murine sarcoma viral oncogene homolog B gene (BRAF), rearrangements of the anaplastic lymphoma kinase (ALK) gene, ROS1 proto-oncogene receptor tyrosine kinase (ROS1), or ret proto-oncogene (RET) are found in tumors of LCNS [7–10].

A deeper understanding of the biology of LCNS may improve treatment and screening options for those patients. Comprehensive analysis from the ethnically divert, single cohort on demographics, clinical, molecular, pathological characteristics, treatment and survival of never smokers with lung cancer is missing from the literature.

The aim of our study was to perform a comprehensive analysis of demographic, clinical, pathological, molecular, treatment and survival data in LCNS diagnosed and/or treated at a comprehensive North American cancer centre, the University Health Network-Princess Margaret (UHN-PM) Cancer Centre.

We identified 712 consecutive LCNS patients, diagnosed and/or treated at the UHN-PM Cancer Centre from June, 1988 to January, 2015. Patient and tumor characteristics are presented in Table 1. Most patients were female (72%) with a median age at diagnosis of 62.2 years (18–94). Most were Caucasian (46%) followed by East Asian (42%), black (5%), South Asian (4%) and other ethnicities (3%). Environmental tobacco exposure (ETS) was documented in 16% of patient records and exposure to other recognized lung cancer risks factors in 8%. However, most patients (76%) did not have documented identifiable risk factor. (Table 1). The family history of lung cancer was documented in only 6% of patients’ records.

NSCLC-NOS: NSCLC not other specified

**5 tumors tested only for EGFR

10 tumors tested only for EGFR and ALK

***7 tumors tested only for EGFR

17 tumors tested only for EGFR and ALK

1 tumor tested only for EGFR, ALK and ROS-1 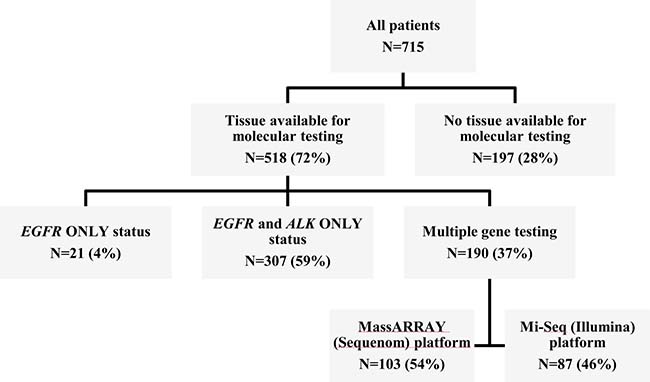 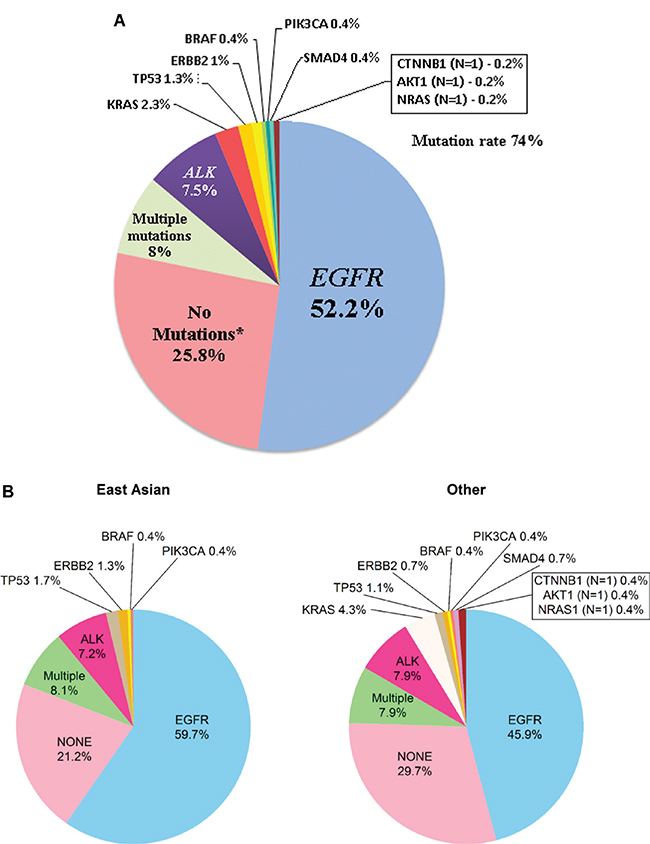 Most patients with early stage disease (stage I-IIIA) underwent surgical resection (88%). Adjuvant cisplatin-based chemotherapy was delivered in all patients who had metastatic nodal involvement (31%). Stage IV patients (both at diagnosis and during the follow-up) with EGFR mutation, ALK translocation and ERBB2 mutation positive tumors received targeted treatment in 88%, 83% and 67% cases, respectively. 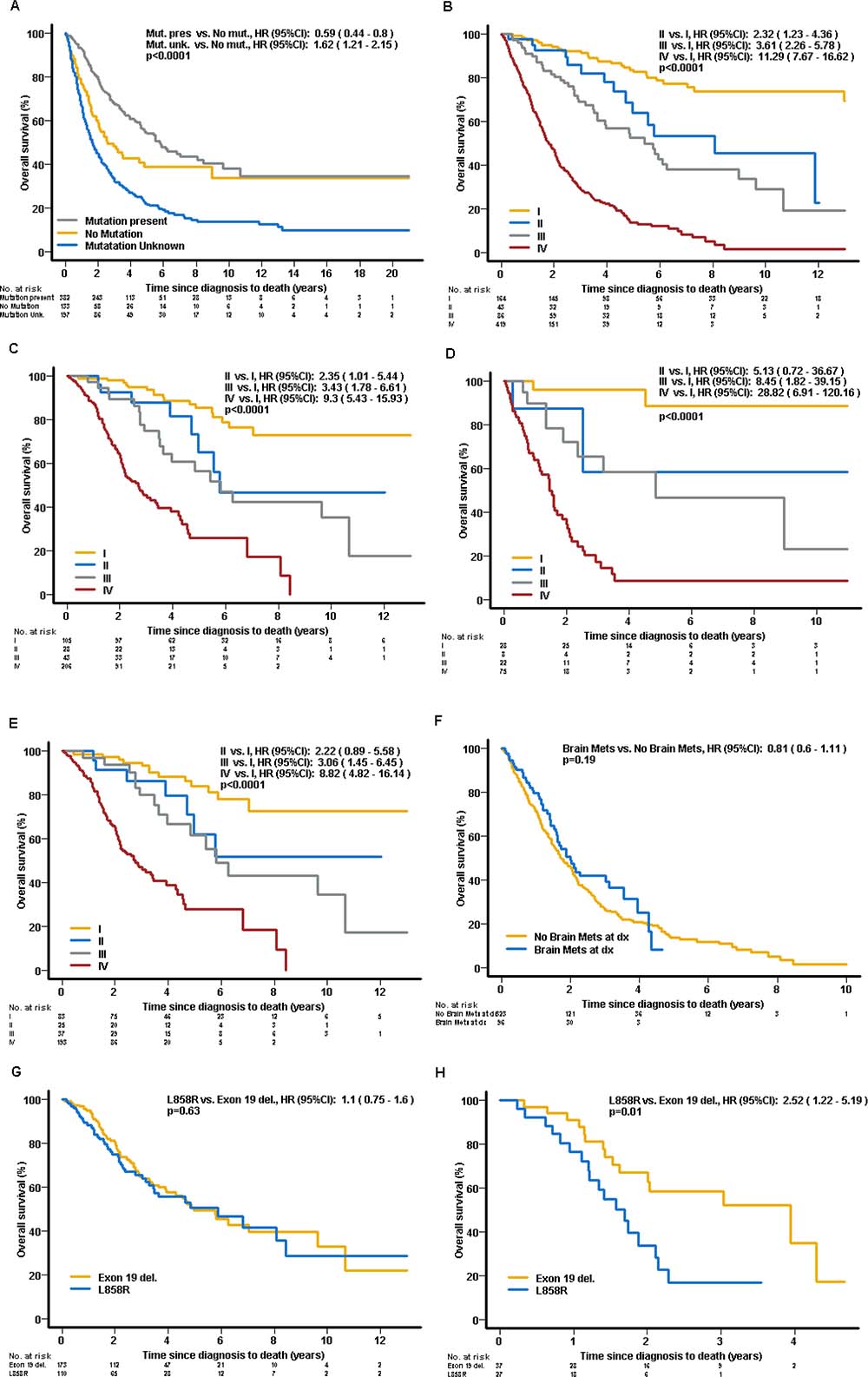 With 712 patients, our study is the largest series of LCNS diagnosed and/or treated at a single institution that includes comprehensive demographic, clinical and molecular features of LCNS. We demonstrate that despite the high proportion of patients presenting with stage IV cancers, and even brain metastases, LCNS is associated with prolonged OS, most likely due to the high prevalence of actionable driver mutations.

LCNS has been recognized only recently as a distinct clinical entity and has become the subject of intensive basic and clinical research [3, 6, 16]. The high prevalence of “druggable”/actionable driver gene mutations in LCNS tumors, geographical and ethnic differences in its incidence and clinico-pathological and genomic features, make LCNS a unique disease among thoracic malignancies [6, 17].

In our cohort, which is similar to previously published reports, women represented the majority (72%); most tumors (88%) were adenocarcinomas and the 59% of patients had metastatic disease at diagnosis [3, 18]. Historically, the majority of studies and reports have come from East Asia due to the high incidence of LCNS in this geographic region, with only few recently published reports from Western countries [19–21]. Caucasians and East Asians constituted the most common ethnicities (46% and 42%, respectively) in our cohort. The PM Cancer Centre’s unique location in one of the most multi-cultural and multi-ethnic cities in the world, allowed us to study LCNS among ethnically diverse populations including Caucasian, East Asian, South Asian, and black patients. Median age of diagnosis in our study was 62.2 years for entire cohort with no gender differences: 62.4 (women) and 61.6 (men) years, respectively. While reports from East Asia indicate the higher incidence of LCNS at younger ages, this finding was found in some but not all cohort analyses of Western populations [6, 12, 22, 23]. In our study, there was no significant difference in age and gender distribution at diagnosis between the Caucasian and Asian populations (Table 1). There was, however, a significantly (p = 0.0028) smaller proportion of stage I disease at diagnosis among the Asian population (18%) as compared to the Caucasian population (28%) (Table 1).

There are several recognized risk factors besides tobacco smoking in the pathogenesis of lung cancer; in LCNS environmental tobacco exposure is the most established of these risk factors [24, 25]. Other putative risk factors include exposure to radon, domestic (cooking) fumes (especially in East Asia), asbestos, air pollution, hormonal factors, presence of pre-existing lung disease, previous treatment with ionizing radiation to the chest, oncogenic viruses (e.g. human papillomavirus – HPV) or inherited genetic susceptibility [26–28]. In our retrospective study, only 16% of patients had documented environmental tobacco exposure in their medical records. According to the most recent, prospective epidemiological study on LCNS from France, definite exposure to the most common occupational carcinogens can be as high as 35% in men but only 8% in women [21]. The retrospective nature of our study, however, limits the accuracy of the reported potential carcinogen exposure in our studied population.

Approximately 45% of men and 38% of women will be diagnosed with some form of invasive cancer during their lifetime; 8–10% of all newly diagnosed cancers will occur in patients with a prior diagnosis of a different malignancy [29]. The relatively high (16%) incidence of prior non-lung primary malignancies in our cohort has not been reported previously. The occurrence of multiple cancers in an individual could be partially explained by inherited genetic mutations conferring susceptibility to the relevant cancers, and partially due to environmental exposures increasing the risk of multiple cancers or long term toxicities of therapy used for the first cancer [30]. Our finding however requires further validation.

Patients harboring EGFR exon 19 deletions compared to those harboring exon 21 insertions may have longer survival [33, 34]. In our study we found no significant survival difference between these two patients’ cohorts (Figure 3G). However, in patients with brain metastases and EGFR-mutant tumors, the presence of exon 21 insertion was associated with significantly shorter survival (HR 2.52; 95% CI: 1.22–5.19; p = 0.01) when compared to patients with tumours harbouring exon 19 deletion. The reason for this difference remains largely unknown and may be only partially explained by higher affinity of EGFR tyrosine kinase inhibitors (EGFR-TKIs) to EGFR with exon 19 deletion compared to exon 21 insertion, combined with drug exposure variability across the blood-brain barrier [35, 36].

Before the era of molecularly targeted therapy, many but not all retrospective analyses, showed better survival of LCNS when compared to smokers [18, 43–45] that was independent of other known prognostic factors [46, 47]. The better outcome of LCNS may be explained in part by the predominance of women and adenocarcinoma histology since these two factors have long been recognized as favorable prognostic factors in NSCLC [48]. However, the identification of sensitizing driver mutations in the non-smoking population provided the unique opportunity for molecularly selected lung cancer patients to receive targeted, personalized treatment that translate into clinically meaningful benefit compared to patients with tumors lacking actionable genomic drivers [49, 50]. In our study, we report a mOS of 42.2 mo for the entire cohort, with significantly better outcome for patients with tumors harboring mutations (69.5 mo) when compared to patients without mutations (31.0 mo) or with unknown mutation status (19.9 mo). Our results are similar to those recently published by Kris et al. [50]

Our study has limitations since it is a retrospective analysis of highly selected patients diagnosed and treated from 1988–2015 in a tertiary referral academic hospital. During that time, we have witnessed rapid translation of basic discoveries into practice changing treatment guidelines and worldwide implementation of molecular testing in NSCLC patients. We are aware about heterogeneity of genetic testing (moving from single gene mutation/translocation analysis to multiplex NGS), treatment modalities (incorporation of targeted agents in the routine practice for selected patients) and sequence of these therapies in our cohort, which reflects rapidly evolving diagnostic and treatment guidelines for patients with NSCLC in the recent years.

In summary, we report on epidemiological, clinical, pathological, molecular and survival data of the largest cohort of never smokers with lung cancer from a single institution. We demonstrated that LCNS is characterized by prolonged survival, particularly in the presence of actionable driver mutations that allow personalized treatment options that translate into clinically meaningful benefit.

We performed a retrospective analysis of demographic, clinical and laboratory data stored in the electronic patient record system at the UHN-PM Cancer Centre of never smokers with a pathologic diagnosis of primary lung malignancy diagnosed and/or treated from June 1988 to January 2015. The study was approved by the institutional Research Ethics Board (REB).

The main outcome was overall survival (OS) calculated from the diagnosis date to the date of death or last follow-up visit. Median OS (mOS) was determined using Kaplan-Meier estimates and p-values expressing the difference between the survivor distributions were based on the Wald test within the Cox proportional hazards model. When covariates had more than two levels the overall p-value was based on the log-rank test. The effect of EGFR and ALK molecular alterations also was tested while adjusting the model for significant clinical factors. The covariates of age, gender, stage, histology (adenocarcinoma vs. all other histologies), ECOG and ethnicity were included in the model. Utilizing a backward stepwise selection method, covariates that were not significant were excluded one by one from the model. The covariates thus selected were also tested in the subset for which the mutation status was known. The EGFR mutations and ALK translocations were tested adjusting the model for the significant covariates found in the previous step.

Celeste Yu from the Cancer Genomic Program at the Princess Margaret Cancer Centre for her help in obtaining the molecular data from IMPACT/COMPACT trials cohort.

This work is partially supported by a Canadian Cancer Society Research Institute grant #701595 (support for biostatistician).