Results: LINE-1 methylation levels were significantly lower in HCC and cHCC-CC tissues, but not in ICC tissues, than those in noncancerous liver parenchyma (HCC: p < 0.0001; cHCC-CC: p < 0.001; and ICC: p = 0.053). HCC cases with hypomethylated LINE-1 had significantly shorter relapse-free survival (RFS) (log-rank, p = 0.008); however, this was not observed for the cHCC-CC or ICC cases. Multivariate Cox regression analysis revealed a significantly higher HCC recurrence rate in the group with hypomethylated LINE-1 (hazard ratio, 1.62; 95% confidence interval, 1.06–2.58; p = 0.025).

Conclusions: The genome-wide DNA hypomethylation status estimated via LINE-1 methylation levels might be indicative of poor RFS in patients with HCC but not ICC or cHCC-CC.

Primary liver cancer (PLC) is the sixth most common cancer and the second leading cause of cancer death worldwide [1]. Pathologically, approximately 85–90% of PLC can be classified as hepatocellular carcinoma (HCC) and 5–10% as intrahepatic cholangiocarcinoma (ICC), with combined hepatocellular and cholangiocarcinoma (cHCC-CC) representing a small portion of PLC [2–4]. Many cases of HCC arise from cirrhosis resulting from chronic infection by hepatitis B and C virus (HBV and HCV, respectively), alcoholic injury, and non-alcoholic fatty liver disease (NAFLD), which are increasing in incidence with changes in lifestyles [5, 6]. ICC is an aggressive cancer arising from epithelial cells of the bile duct or hepatocytes [7], and its development has been associated with primary sclerosing cholangitis, hepatitis virus infection, alcohol consumption, smoking, fatty liver disease, diabetes, cholelithiasis, and choledocholithiasis. In addition, risk factors of ICC vary depending on the region [8]. cHCC-CC is currently defined as an unequivocal mixture of both HCC and ICC. According to the recent definition from the WHO, the cHCC-CC category comprises two histological forms: a classic type and a subtype with stem cell-like features [9]. All three cancers belong to the same category as PLC; however, clinically, ICC and cHCC-CC often show much more aggressive behavior with poorer prognosis than does HCC, with no standard treatment other than curative surgical resection [2–4]. Thus, the clinical features of these three types of cancer are likely distinct.

Cancer initiation and progression are caused by concurrent changes in multiple genes via genetic and epigenetic alterations leading to the activation of oncogenes or the suppression of tumor suppressor genes [10]. Along with genetic mutations, epigenetic changes such as DNA methylation and histone acetylation are important for carcinogenesis and tumor development [11, 12]. Cancer cells exhibit two types of alterations in DNA methylation: one is global DNA hypomethylation, and the other is site-specific CpG island promoter hypermethylation [13, 14]. Global DNA hypomethylation plays an important role in genomic instability, and site-specific promoter hypermethylation can silence tumor suppressor genes, leading to cancer development [15–18]. Since the long interspersed nucleotide element-1 (LINE-1) retrotransposon constitutes a substantial portion of the human genome (approximately 17%), the methylation status of LINE-1 reflects the global DNA methylation status [19]. LINE-1 hypomethylation is associated with poor prognosis in esophageal, gastric, colorectal, pancreas and breast cancer [20–24], and it can be measured in a cost-effective manner via high-throughput pyrosequencing techniques [25–27]. Therefore, the methylation level of LINE-1 may be an effective biomarker for prognostic prediction. 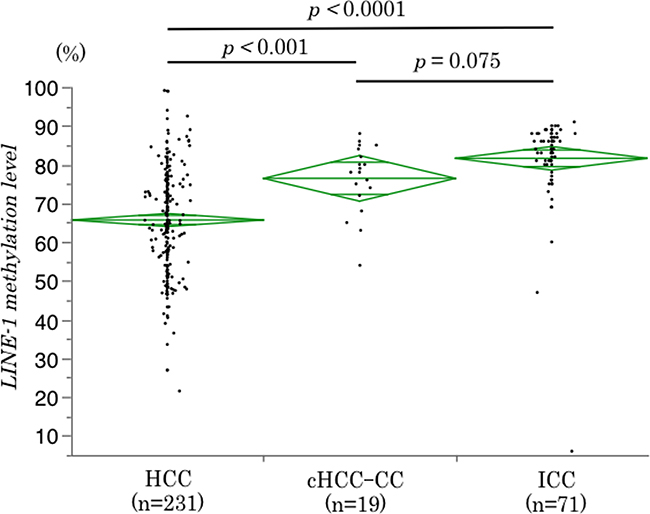 Table 1: Association between the LINE-1 methylation level in cancerous tissues and clinicopathological characteristics of 321 patients with primary liver cancer 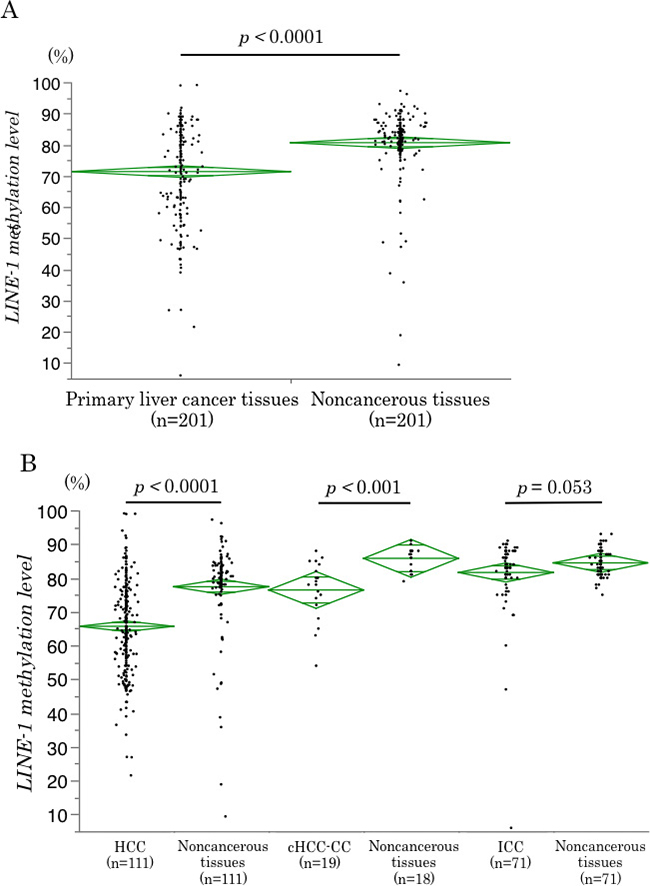 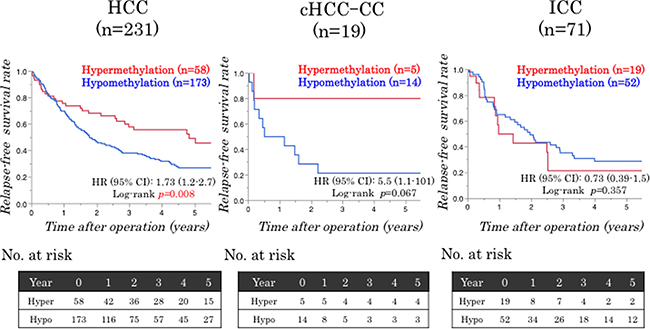 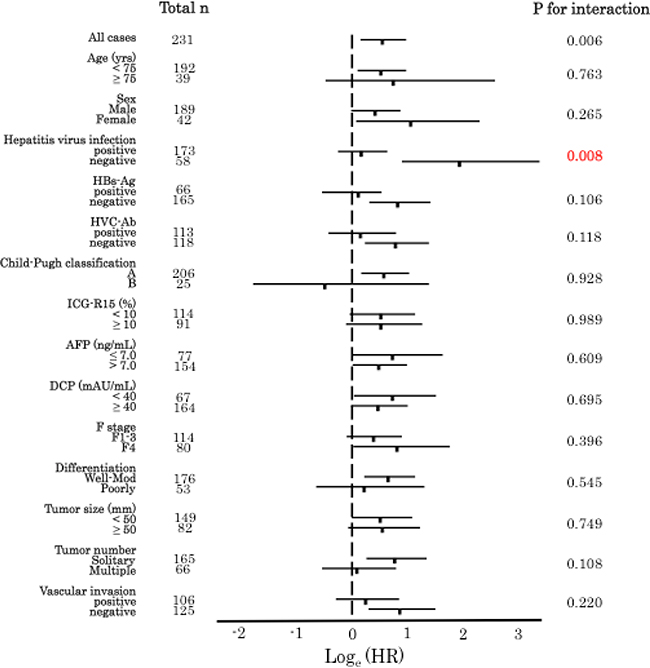 Finally, we analyzed the relationship between OS and LINE-1 methylation level. There were no significant differences between the hyper- and hypomethylation groups in any subtype of PLC (Supplementary Figure 2). Thus, LINE-1 hypomethylation was associated with poor RFS in HCC patients only.

To the best of our knowledge, this is the first study examining the prognostic value of LINE-1 methylation levels in PLC including HCC, ICC and cHCC-CC. Our results using 321 PLC FFPE samples showed that LINE-1 methylation levels were lower in HCC and cHCC-CC tissues but not in ICC tissues than those in the matched noncancerous liver parenchyma. This suggests that there may be differences in the epigenetic status among the subtypes of PLC. In addition, LINE-1 hypomethylation was associated with unfavorable clinical outcomes in patients with HCC only. Thus, the current study demonstrated differences in epigenetic status among PLC subtypes and the association between LINE-1 methylation and prognosis in PLC patients.

Our results suggested that global DNA hypomethylation, which leads to chromosome instability and fragility, is correlated with cancer initiation and progression in HCC and cHCC-CC but not in ICC. Udali et al. reported significantly lower levels of DNA methylation in HCC than those in cholangiocarcinoma (CC) tissues and comparable levels between CC and matched noncancerous liver parenchyma and gall bladder tissues [29]. Our data are consistent with their results. Thus, although HCC and ICC are similar subtypes of PLC, their epigenetic status may be distinct. One of the reasons behind the differences may be the presence of isocitrate dehydrogenase 1 (IDH1) and IDH2 mutations in ICC. IDH1 and 2 are enzymes that catalyze the oxidative decarboxylation of isocitrate to α-ketoglutarate and known as one of the driver genes of ICC [30]. IDH1/2 mutations are observed in 15 to 20% of ICC cases [31, 32] and result in the production of the 2-hydroxyglutarate (2-HG), which inhibits the , 2-HG contributes to maintaining (TET) proteins [33]. TET family enzymes (TET1, TET2, and TET3) are implicated in DNA demethylation through their dioxygenase activity that converts 5-methylcytosine to 5-hydroxymethylcytosine [34]. Thus, 2-HG contributes to maintaining DNA hypermethylation by inhibiting TET2 activity. Therefore, IDH1/2 mutations lead to DNA hypermethylation in ICC, leading LINE-1 hypermethylation. However, IDH 1/2 mutations only partly account for the differences in the methylation patterns in ICC [31, 32], and there may be other mechanisms underlying the hypermethylation of DNA in ICC compared to that in the other PLC subtypes. In addition, there was only one patient with neoadjuvant chemotherapy in ICC using FOLFOX (leucovorin and fluorouracil and oxaliplatin): the presence of preoperative chemotherapy would affect the LINE-1 methylation level in cancerous or noncancerous tissues of ICC; however, we cannot refer this issue because of the lack of samples to evaluate. Interestingly, LINE-1 methylation levels were significantly lower in cHCC-CC cancerous tissues than those in noncancerous liver parenchyma, suggesting that cHCC-CC was more similar to HCC than to ICC in terms of epigenetic status.

Hepatitis virus infection is a strong prognostic factor of PLC. In the present study, the presence or absence of HCV infection had significant effect on the LINE-1 methylation level of patients with HCC (Table 1). Nishida et al. reported the effect of hepatitis virus infection on epigenetic status in liver diseases [40]. On the other hand, subgroup analysis showed that the risk of recurrence assessed based on LINE-1 hypomethylation was higher in the non-hepatitis virus-infected group than that in the infected group (Figure 4). Therefore, especially in patients without hepatitis virus infection, LINE-1 hypomethylation may be an effective biomarker of HCC recurrence. In the current study, comparison of primary tumor and metastatic lesion of LINE-1 methylation level had not been conducted. As Murata et al. reported in colon cancer [41], it can be expected that primary tumor and metastatic lesion are equivalent LINE-1 methylation in HCC. Furthermore, as you know, there are “metastasis” and “multicentric recurrence” in the recurrence pattern of HCC. The methylation level of LINE-1 in cancerous tissue may be useful for this diagnosis, therefore, it may be worthwhile to collect many clinical samples of recurrent resections of HCC.

Several 10-μm-thick sections of formalin-fixed paraffin-embedded (FFPE) tumor tissues were stained with hematoxylin and eosin (H&E), and the tumor slides were reviewed by a pathologist who marked the areas corresponding to the tumor and noncancerous liver parenchyma. Cancer tissues without stromal areas were also marked. In each case, as much of the cancer tissues without stroma as possible were macroscopically scraped off from the slides as previously described [17, 21–24, 28, 42]. The section area depended on the size of the tissue (Supplementary Figure 3). Then, DNA was extracted using a QIAamp DNA FFPE Tissue Kit (Qiagen, Valencia, CA, USA).

Genomic DNA was treated with sodium bisulfite using an EpiTect Bisulfite Kit (Qiagen) as previously described [17, 21–24, 28, 42]. Polymerase chain reaction (PCR) and subsequent pyrosequencing of LINE-1 were performed as previously described using the PyroMark kit (Qiagen) [17, 21–24, 28, 42]. This assay amplifies a region of LINE-1 containing four CpG sites (base positions 305–331 in Accession No. X58075). In each tumor sample, the overall LINE-1 methylation level was determined based on the average relative amount of cytosine (C) residues among the four CpG sites (Supplementary Figure 4). Since several reports have shown that hepatocytes can differentiate into cholangiocytes, which can give rise to cHCC-CC and ICC [7, 43, 44], we considered LINE-1 methylation levels in the liver parenchyma in the calculation of overall LINE-1 methylation levels in noncancerous tissues, as well as in cHCC-CC and ICC tissues.

The clinicopathological characteristics were summarized using descriptive statistics. We compared the means using Student’s t test and paired t test and analysis of variance between the two groups. We staged LN status using the seventh edition of the American Joint Committee on Cancer (AJCC)/International Union Against Cancer (UICC) staging manual [45] and F stage using New Inuyama classification [46]. The survival curves were estimated using the Kaplan–Meier method and compared using the log-rank test. Hazard ratios (HRs) and 95% confidence intervals (CIs) were calculated using Cox proportional hazard models. The prognostic factors for RFS and OS in HCC and ICC patients were assessed using the Cox proportional hazard models with the backward elimination method. In addition, to assess interactions among variables, the LINE-1 methylation level was cross-correlated with another variable of interest via univariate Cox modeling in HCC, and the interaction was evaluated using the Wald test. All p-values were two-sided, and values lower than 0.05 were considered statistically significant. JMP (version 12, SAS Institute, Cary, NC, USA) was used for statistical analyses.

We thank Keisuke Miyake and Yoko Ogata for assisting with experimental techniques. We greatly appreciate their help.

This work was not funded.