CRM1/XPO1 (CRM1) is a nuclear export chaperone that mediates the export of proteins essential to growth regulation and tumor suppression. Its overexpression in tumors was found to be associated with poor prognosis. Selective inhibitors of nuclear export are in phase I and II clinical trials for several tumor types. Our aim was to investigate CRM1 expression in pancreatic adenocarcinoma (PAC) and its relationship to survivin expression and the proliferative activity. Sections of tissue microarray containing 76 formalin fixed and paraffin embedded PAC were stained by immunohistochemistry (IHC) for CRM1, survivin, and Cyclin A. Expression levels of CRM1 and survivin and the proliferative activity, the S-phase fraction (SPF) in tumor cells, were determined using a quantitative digital image analysis solution (OTMIAS). Sixty-six of the 76 (86%) PAC showed positive staining for CRM1, and 10 (14%) were completely negative. The mean CRM1 expression levels ranged from 0.3 to 53 units and the median from 0.3 to 45 units. There was significant positive correlation between the mean and median expression levels of CRM1 in tumor cells and the mean and median levels of survivin (p<0.001). Moreover, there was positive correlation between the mean and median CRM1 levels in tumor cells and the SPF (p=0.013). Our results show that CRM1 is expressed in a significant proportion of PAC, and increased CRM1 levels correlates with increased survivin levels and increased proliferative activity.

Pancreatic adenocarcinoma (PAC) is an aggressive malignancy with a dire prognosis. According to the American Cancer Society, over 53,000 individuals will be diagnosed with pancreatic cancer in 2017 and over 43,000 will die from it [1]. About 40% of patients diagnosed with PAC will present at an advanced stage, resulting in very limited treatment choices and difficult clinical decisions [2]. Even tumors caught relatively early at Stage 1A have an abysmal five-year survival rate of roughly 14%. New treatment methods are thus vital to combating this deadly disease.

Chromosome region maintenance-1 (CRM1), also known as exportin 1 (XPO1), is a nuclear export chaperone that mediates the export of proteins essential to growth regulation and tumor suppression [3]. CRM1 was found to be overexpressed in several types of transformed cells and malignant tissues, and its overexpression correlates with aggressive behavior and poor survival [3]. CRM1 regulates survivin, which is involved in the regulation of mitosis and other important functions related to cell survival. Selective inhibitors of nuclear export are in phase I and II clinical trials for several tumor types [3]. The aim of this study was to 1) determine whether CRM1 is expressed in human PAC and 2) whether this expression correlates with the expression of survivin and tumor proliferative activity as surrogates of CRM1 activity.

Seventy-six cases with adenocarcinoma were available for evaluation with all three antibodies. Of these cases 29 patients were females and 47 were males with ages ranging from 23-78 years (mean 53, median 52). Twenty-two of the tumors were Grade 1, 30 were Grade 2, and 14 were Grade 3. The grades were not provided on 10 adenocarcinomas. With regard to the pathological stage (pT), 3 of these tumors were pT1, 27 were pT2, 45 were pT3, and 1 was pT4. Sixty-two tumors were node-negative and 14 were node-positive. One case was had distant metastasis (M1). 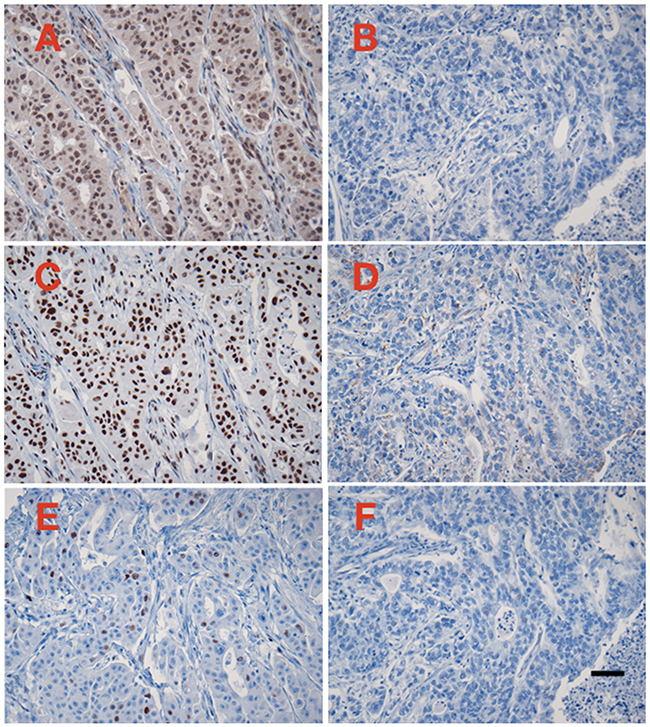 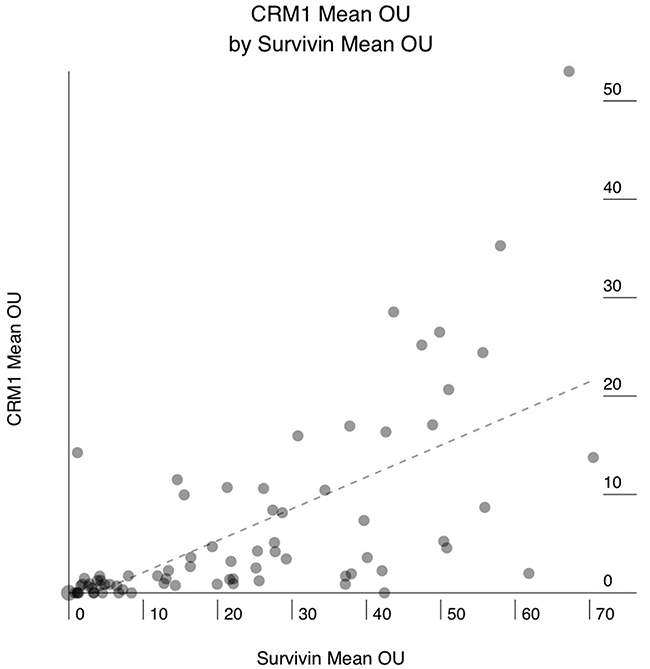 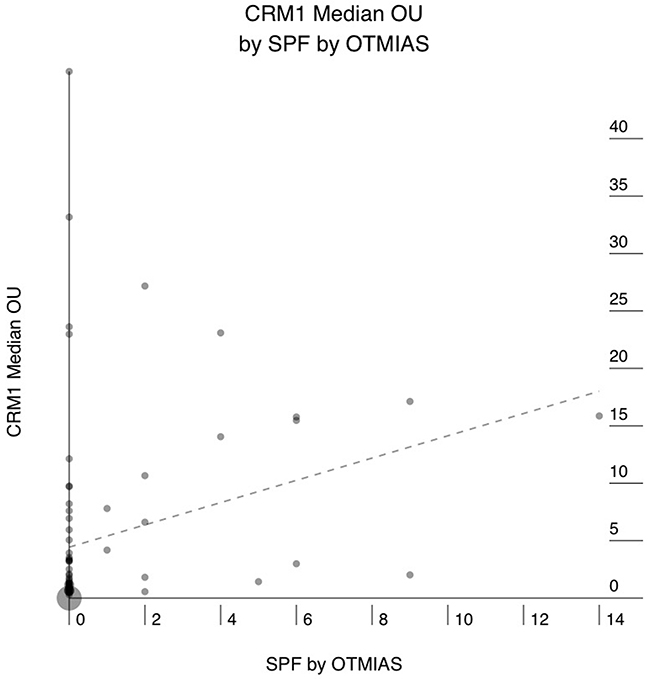 CRM1 is a nuclear export chaperone responsible for export of cargoes from the cell nucleus to the cytoplasm in eukaryotic cells. While smaller molecules can freely move through the nuclear membrane, larger molecules need an active transport mechanism; a group of proteins called karyopherins, of which CRM1 is a member, aid in this process. Proteins and RNA molecules that need transport display special amino acid sequences called nuclear localization signals. These amino acid sequences are responsible for “tagging” its cargo for the correct destination [4]. Tumors require brisk transport of proteins for growth; CRM1 upregulation can aid in this process. Multiple malignancies were found to be associated with increased CRM1 nuclear export including mesenchymal, hematopoietic, and several epithelial tumors including lung, pancreatic, ovarian, cervical, renal, esophageal, and liver cancers [4]. CRM1 overexpression has been shown to be associated with worse outcomes in many cancer types [5–7]. In some cases, CRM1 upregulation may move key regulatory proteins out of the nucleus such as p53. Normally, p53 proteins are present in the nuclear space to maintain DNA integrity, and movement to the cytoplasm can be devastating [5]. In addition to disrupting protective proteins, CRM1 can also move proteins that aid in cancer growth into the cytoplasm.

The protein survivin is regulated by CRM1, and is believed to exert a cytoprotective effect in the cytoplasm by preventing apoptosis, while in the nucleus it is involved in the regulation of mitosis [5, 8–13]. Survivin has also been linked to poor outcome in various malignancies including PAC [14–18]. Increased survivin expression in PAC was found to be associated with decreased response to chemotherapy [19], and increased serum levels was linked to perineural invasion, venous invasion, lymph node status, differentiation, and relapse [19, 20].

Because in this study we used a tissue microarray with one core per tumor, we elected not to correlate the expression levels of CRM1 or survivin with tumor stage, nodal status, or grade as the samples in the tissue array may not be representative of the entire tumor. Our correlations between CRM1, survivin, and SPF (determined by image analysis of cyclin A stained sections) is, however, valid because it reflects pared correlations of biomarker expressions in the same cores. For example, the correlation graph between CRM1 and survivin expression levels is based on correlating CRM1 expression in core 1A with survivin expression in the same core 1A, correlating CRM1 in 2A with survivin in 2A, and so forth. This means, in general, that if CRM1 is overexpressed in a core, then survivin is likely to be expressed in same PAC cells in that same core.

Although CRM1 inhibitors were shown to reduce the growth PAC xenografts in mice [30] and to enhance the antitumor activity of Gemcitabine on PAC cell lines [31], there are no human trials yet. In summary, our findings demonstrate that CRM1 is expressed in a significant number of PAC, and suggest that its overexpression is likely to be associated with biologic activity, and should be considered in future clinical trials with selective inhibitors.

Presented in part at the 2017 Gastrointestinal Cancers Symposium in San Francisco, CA, January 20, 2017 and at the American Association for Cancer Research (AACR) Annual Meeting in Washington, D.C. April 3, 2017.

All other co-authors: No conflicts of interest.

10. Angell H. A study into the potential role of Survivin localization in resistance to drug-induced apoptosis. Bioscience Horizons. 2008; 1:85-91.