Head and neck cancer represents an important global burden, with more than 500,000 new cases diagnosed annually worldwide [1]. The oral cavity is the most predominant site affected by these cancers [2]. Surgery and radiotherapy alone are considered the curative treatment modalities for oral squamous cell carcinoma (OSCC). However, loco-regional recurrent rates are approximately 20 to 50% for patients who undergo radical treatment during the first two years [3]. Radiotherapy is important for management of the unfavorable pathological features after surgery and salvage treatment against persistent or recurrent OSCC. To improve the survival rate of patients with OSCC, cisplatin may be used as a radiosensitizer. The current use of cisplatin only provides moderate control of OSCC. Therefore, it is important to develop a novel radiosensitizer to enhance the efficacy of radiotherapy in treating oral cancer.

Polo-like kinase 1 (PLK1) is an important member of the serine/threonine protein kinase family. It has been shown to play various roles in the regulation of mitosis and throughout the cell cycle [6]. It controls mitotic entry, centrosome separation and maturation, chromosome arm resolution, microtubule kinetochore attachment, spindle assembly checkpoint (SAC) silencing, and cytokinesis [7]. Anti-PLK1 antibodies and small interfering RNA (siRNA) treatment-based studies have shown the essential role of PLK1 in the mitotic progression of cancer [8, 9]. However, its precise mechanism and specific functional role in carcinogenesis and tumor progression is not well understood [10]. Approximately 80% of human tumors express high levels of PLK1 transcripts, whereas PLK1 mRNA is mostly absent in the surrounding healthy tissues [11]. Overexpression of PLK1 was shown to be associated with a poor prognosis in several tumors and a low overall survival rate [12]. Forced overexpression of PLK1 resulted in malignant transformation of normal human fibroblasts in vitro, suggesting that PLK1 might directly contribute to carcinogenesis [13]. Thus, many PLK1 inhibitors have been developed as potential cancer therapeutic agents. One of these compounds, BI2536, a PLK1 specific inhibitor, has shown antitumor and cytotoxic effects in several cancers [14, 15]. BI2536 potently binds to the kinase domain of PLK1 and inhibits its activity, including regulation of multiple mitotic processes and cell cycle [16]. Many studies have suggested that BI2536 might be a potential anticancer agent; however, its use as a radiosensitizer in head and neck cancer has not been investigated.

In the present study, we examined the effects of BI2536 on cell cycle regulation and investigated its putative radiosensitizing activity in oral cancer cells.

To investigate the effects of BI2536 in human fibroblasts and OSCC cells, we monitored the viability of HFW, SAS, and OECM-1 cells treated with BI2536. BI2536 inhibited the growth of OSCC cells in time- and concentration-dependent manners. Treatment with BI2536 at concentrations >10 nM for 24 h significantly reduced the growth of SAS and OECM-1 cells, but not that of human fibroblasts (Figure 1). The half maximal inhibitory concentration (IC50) values of BI2536 in SAS, OECM-1, and HWF on day 2 were 160, 32, and >1000 nM, respectively. HacaT cells from oral epithelium were used as control cells in this study. There was no significant difference between HacaT and oral cancer cells in the MTT assay. However, the morphological examination showed more mitotic arrest and less mitotic catastrophe in HacaT cells treated with BI2536 (Supplementary Figure 1A and 1B).

Figure 1: Cell viability of human fibroblasts (HFW) and OSCC (SAS and OECM-1) cells treated with various concentrations of BI2536. Cells were treated with BI2536 at 1–1000 nM for 1–3 days. MTT assay was used to evaluate cell viability. Data are expressed as the means ± SE from three separate experiments.

In human fibroblasts, BI2536 treatment at concentrations <10 nM did not affect the cell structure during the first two days. However, the morphology of BI2536-treated oral cancer cells showed typical features of mitotic catastrophe and apoptosis on day 1 even at 1 nM; this became more evident as the concentration and time increased (Figure 2). These findings suggested that BI2536 exhibited antitumor activity and induced tumor cell apoptosis. 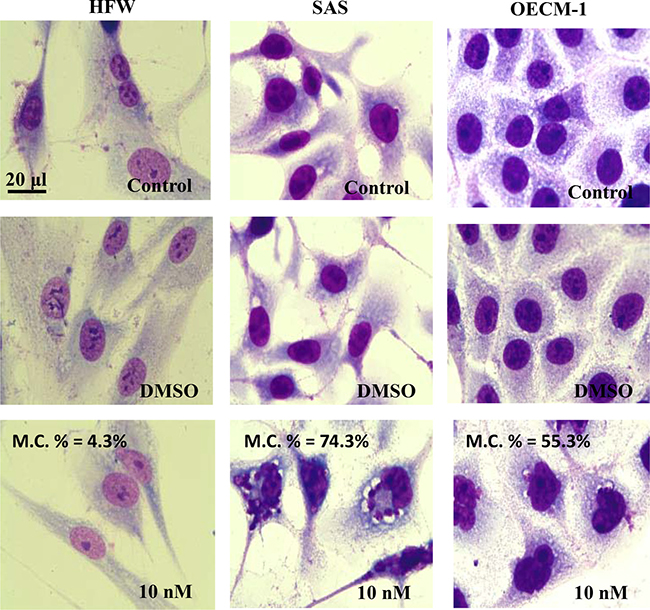 Figure 2: Morphology of HFW, SAS, and OECM-1 cells treated with BI2536. Cells were treated with BI2536 at a concentration of 10 nM, harvested, stained by Liu’s stain, and observed under a light microscope. Micrographs were taken at a magnification of 1000×. The ratio of mitotic catastrophe was 4.3, 74.3, and 55.3% in HFW, SAS, and OECM-1 cells. M.C., mitotic catastrophe. 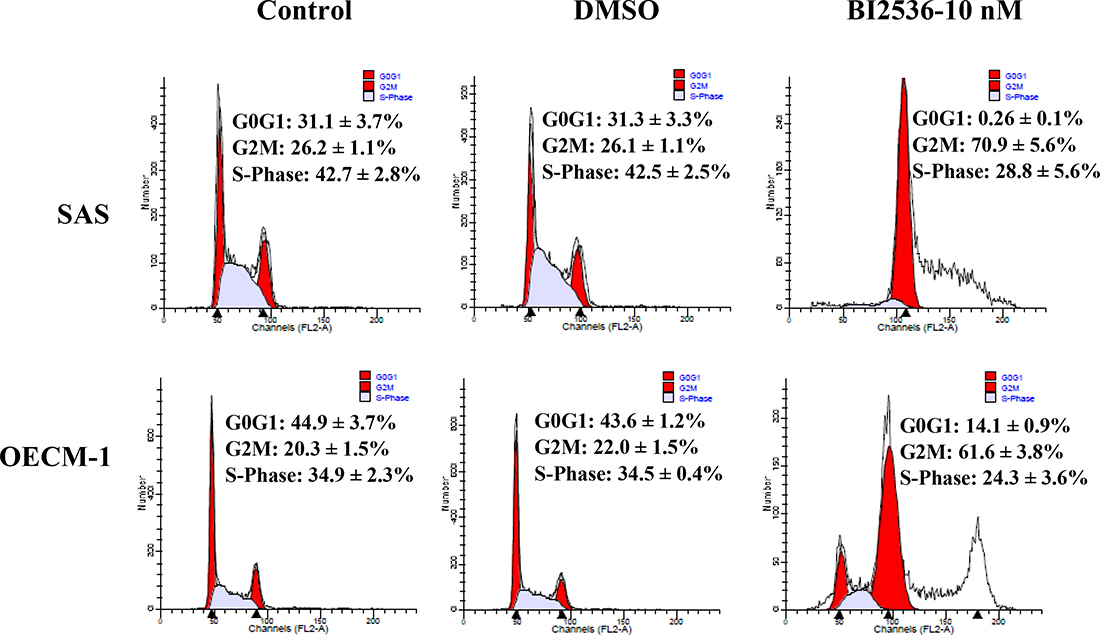 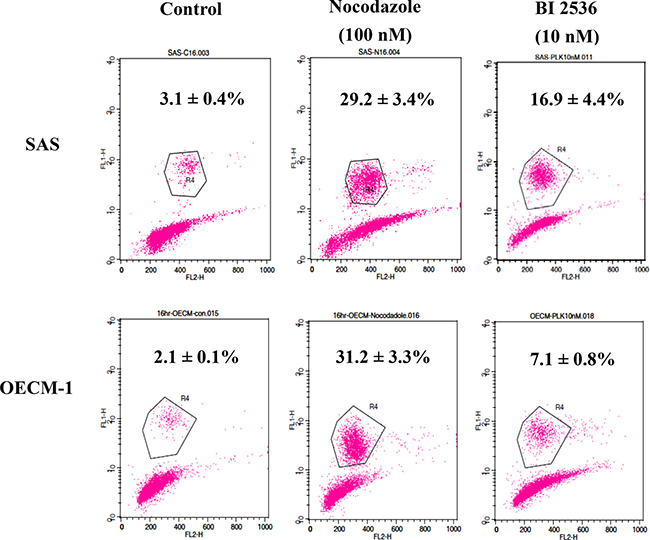 Figure 4: Expression of phosphorylated histone H3 in SAS and OECM-1 cells. Cells were treated with nocodazole (100 nM, a positive control) and BI2536 (10 nM) and then collected for flow cytometry. Data are expressed as the means ± SE. Treatment of SAS and OECM-1 cells with BI2536 at 10 nM increased the ratio of cells in the M phase. 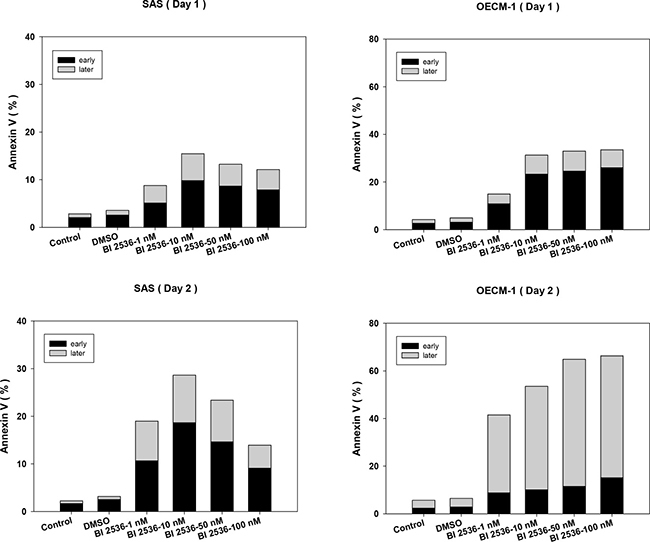 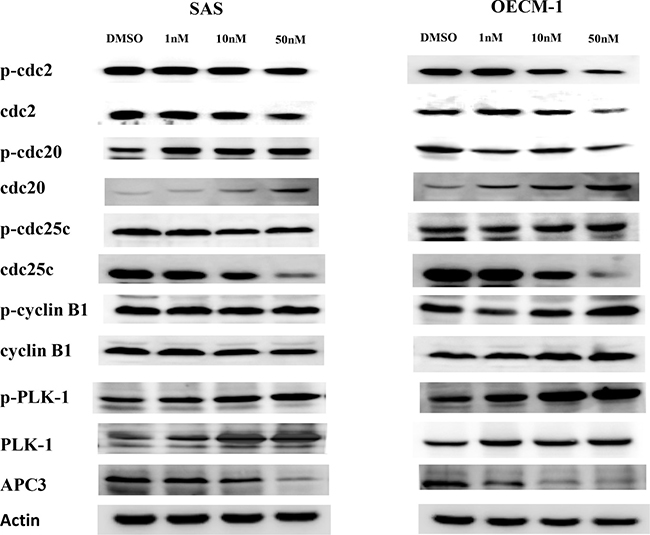 Figure 6: The expression of proteins related to cell cycle regulation in SAS and OECM-1 cells. Cells treated with BI2536 at 0 nM, 1, 10, and 50nM were harvested for extraction of proteins. Western blot analysis was performed to measure the protein expression. 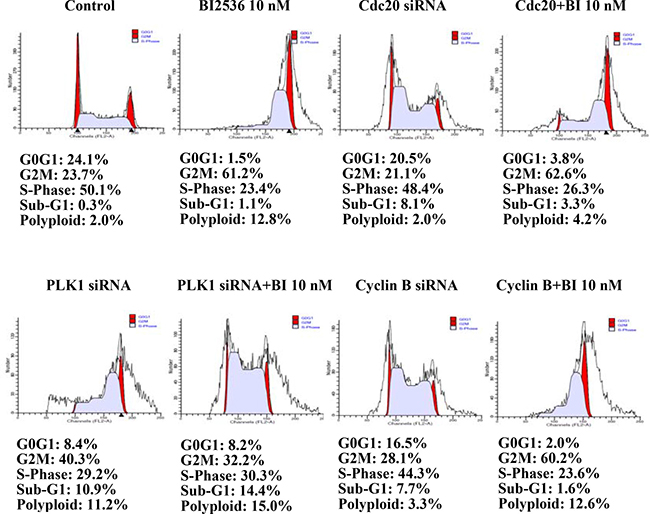 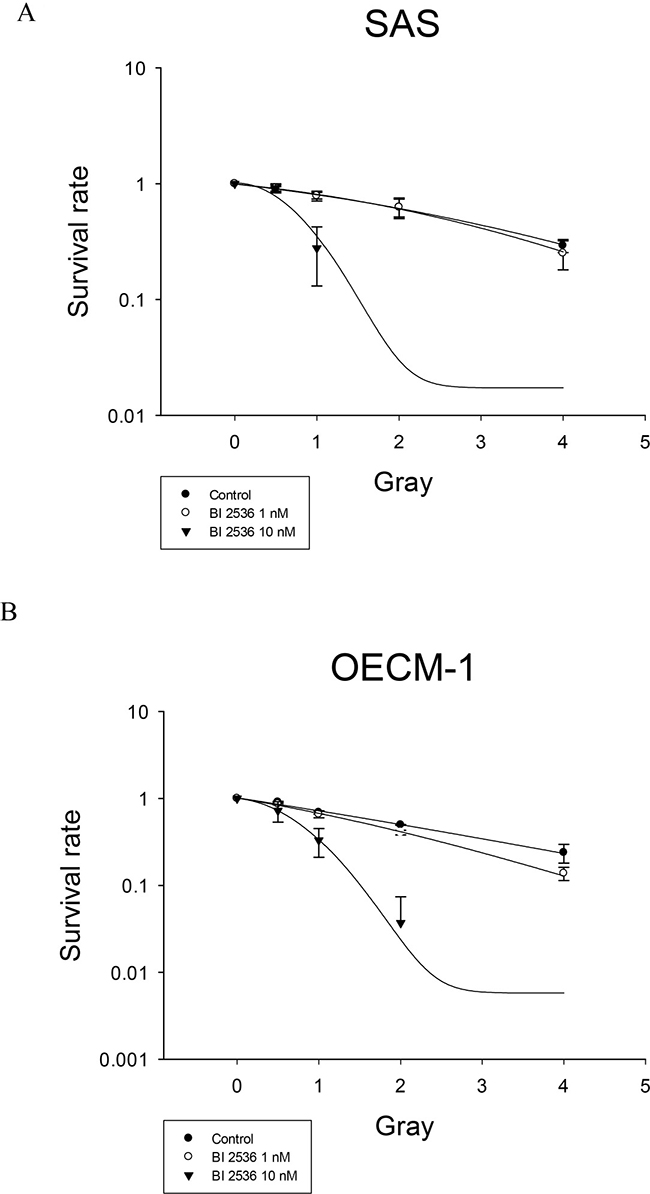 Cells at the G2 and M phases are more sensitive to radiation than those at other cell cycle phases. BI2536 could inhibit mitosis; therefore, its administration prior to radiation could result in radiosensitization. In this study, BI2536 was found as a potent radiosensitizer at concentrations >10 nM. BI2536 treatment for 24 h before radiation resulted in accumulation of cells in the G2 and M phases, which impaired the repair of radiation-induced damage. However, another study showed that administration of PLK1 inhibitors after radiation might cause radioresistance by prolonging the G2 checkpoint and inducing cell repair [20]. To elucidate the actual effects of BI2536 on radiosensitivity, we examined the radiosensitizing activity of BI2536 in SAS xenograft animal model. BI2536 might act as a potent radiosensitizer of oral cancer cells, accompanied by induction of mitotic catastrophe and mitotic arrest.

Our study showed that the G2/M population significantly increased in BI2536-treated cells, suggesting an increase in the number of mitotic cells. In addition, BI2536 affected cell cycle regulators, which coordinate critical protein kinases and phosphatases in the G2/M phases. PLK1 plays a pivotal role during the M phase and cytokinesis in cancer cells. Cyclin-dependent kinase 1 (CDK1), cyclin B, and APC3 regulate the transition between cell cycle phases, although they are not always the drivers of the process. Instead, they respond to signals within the cell and from the external environment. Our study showed that BI2536 induced mitotic arrest with alteration in the expression of Cdc2, Cdc20, Cdc25, cyclin B1, PLK1, and APC3. In particular, BI2536 treatment induced upregulation of Cdc20, cyclin B1, and PLK1 expression and downregulation of Cdc2, Cdc25, and APC3 expression. However, BI2536 inhibited PLK1 activity, as evidenced by the decrease in the binding and phosphorylation of cdc25. This might explain the coordination between the regulatory activities of CDK1 and cyclin B [21].

Choi et al. also showed that BI2536 treatment induced PLK1 overexpression, which activated SAC in NSCLC cells [14]. Despite BI2536-induced PLK1 overexpression, its activity was inhibited. The results of this previous study showed that BI2536 inhibited PLK1 activity and blocked the hyperphosphorylation of the checkpoint protein, BubR1, which is sensitive to kinetochore tension loss. To clarify the mechanism underlying the overexpression of cell cycle proteins in our study, Cdc20, cyclin B1, and PLK1 knockdown was performed in SAS cells using siRNA. Our results revealed that PLK1 knockdown could partially reverse BI2536-induced G2/M accumulation. Thus, PLK1 might mediate BI2536-induced cell cycle alterations. It was suggested that BI2536 inhibited the kinase activity of PLK1 without inhibiting its expression.

To date, the key role of PLK1 in carcinogenesis remains unclear. The dose-limiting toxicities of BI2536 account for its unsatisfactory therapeutic effects in clinical trials [22]; however, it might be used as a potential radiosensitizer of oral cancer cells.

In conclusion, our data showed that BI2536 induced mitotic arrest at the M phase in oral cancer cell lines. In addition, it resulted in significantly enhanced efficacy when combined with radiotherapy. The animal xenograft experiment suggested that BI2536 could be a potent radiosensitizer in vivo. Further clinical trials are required to validate the antitumor effects of BI2536 and determine its potential use as a PLK1 inhibitor for oral cancer treatment in the future.

PLK (HSS108120, Invitrogen), Cdc20 (HSS101650, Invitrogen), and cyclin B1 siRNAs (sc-29284, Santa Cruz) were used for transfection using lipofectamine RNAiMAX reagent (Invitrogen, CA, USA), according to the manufacturers’ instructions). SAS and OECM1 cells were seeded in 6-well plates at a density of 2 × 105 cells/well. Then, they were transfected with siRNAs for 24 h. The transfected cells were treated with the indicated doses of BI2536 for 24 or 48 h.

The size of implanted tumors and body weight of each mouse were determined every other day by one observer. The largest (a) and smallest (b) diameters were measured using calipers, and tumor volume was estimated as follows: tumor volume = 0.5 × ab2.

In the in vivo experiment, body weight was calculated every other day by one observer. Animals were sacrificed five weeks after radiation. The plasma levels of ALT, creatinine, and WBC were measured using a SYNCHRON LX20 spectrophotometer (Beckman Coulter, San Diego, CA, USA).