The detection of multiple lesions of gastric cancer (GC) has been increasing along with advances in endoscopic and pathologic examinations. Synchronous multiple GCs (SMGC) have been reported to account for 5–15% of all GC cases [1]. However, accessory lesions are generally not considered as a prognostic factor in SMGC patients [2, 3].

GC patients sometimes present other primary malignancies (OPMs), particularly in the colon [4]. Recent studies have demonstrated an association between SMGC and OPMs, and found that this association was frequently observed in colorectal cancer patients [5, 6]. However, the exact relationship between SMGC and OPMs remains unclear, and it would be of clinical benefit to clarify what types of OPMs occur in SMGC patients.

With this in mind, we performed the present multi-center retrospective cohort study to clarify the relationship between SMGC and OPMs.

The characteristics of the study population are summarized in Figure 1. A total of 1121 consecutive patients with GC were treated surgically between 2002 and 2013 in Shinshu University Hospital, Shinshu Ueda Medical Center, and Nagano Prefectural Kiso Hospital. Excluding 17 patients with special types of histology, such as neuroendocrine carcinoma and squamous cell carcinoma, 1094 patients with gastric adenocarcinoma were enrolled in the present study. Of the 1094 patients with GC, 102 patients (9.3%) had SMGC, including 80 patients with 2 GCs, 18 patients with 3 GCs, and 1 patient each with 4, 5, 6, and 7 GCs. Fifty-five patients underwent gastrectomy after non-curative resection by endoscopic submucosal dissection (ESD), and 34 patients had GC in the remnant stomach. There was no patient with a new GC detected within 1 year after gastrectomy. Seventeen patients had metachronous GC, including 3 patients treated with endoscopic submucosal dissection and 14 patients treated with gastrectomy. Including these metachronous GCs, 115 patients had multiple GC (MGC); 4 patients had both SMGC and metachronous MGC. The mean follow up period was 41.8 months. 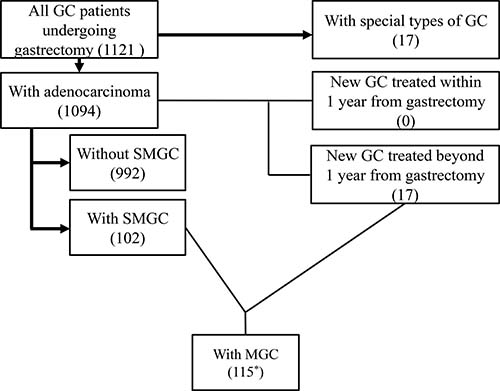 Table 1: Characteristics of patients with or without synchronous multiple gastric cancer

Table 2: Characteristics of patients with solitary and multiple gastric cancer

*OPM include pre- and postoperative cancers.

Occurrence of OPMs during the pre- and postoperative period

The most frequently observed malignancy in the total cohort was colorectal cancer, which was observed in 77 patients, followed by prostate and lung cancers. Malignancies of the thyroid (p = 0.031), esophagus (p = 0.044), and colorectum (p = 0.025) were more frequently observed in patients with SMGC than in those without (Table 3).

Table 4: Other primary malignancies in patients with or without synchronous multiple gastric cancer

Relationships between MGC and OPMs

Table 7: Characteristics of patients with and without postoperative other primary malignancies

There were 995 patients undergoing gastrectomy with curative intent for GC. In these patients, there were no differences in the overall survival (OS) or disease-specific survival (DSS) between the patients with (n = 100) and without SMGC (n = 895: Figure 2A and 2B), or between patients with or without OPMs (Figure 3A and 3B). However, a significantly worse OS was observed in patients with preoperative OPMs than in those without (Figure 4A), whereas there was no difference in DSS (Figure 4B). In the multivariate analysis, although the presence of SMGC was not a significant predictive factor, preoperative OPM was identified as an independent prognostic factor in patients who underwent gastrectomy with curative intent (p = 0.021; HR: 1.481, 95% CI: 1.060–2.070; Table 9). 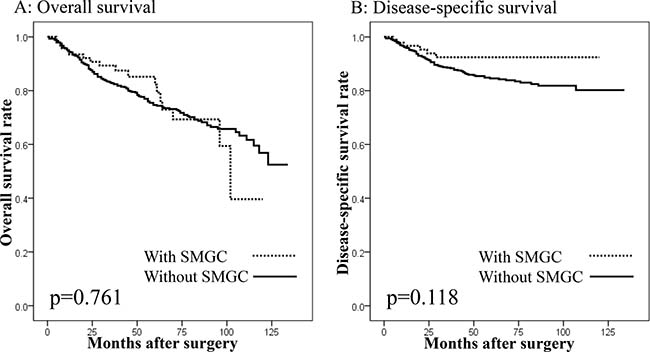 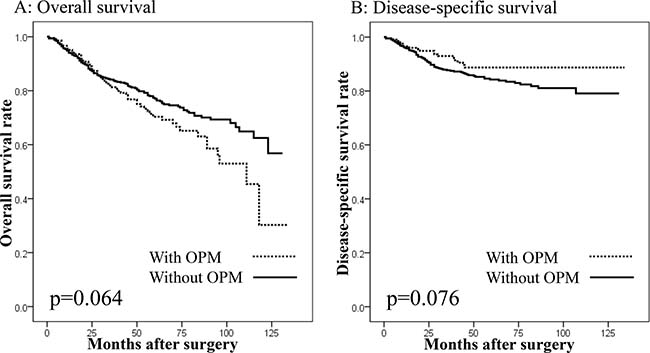 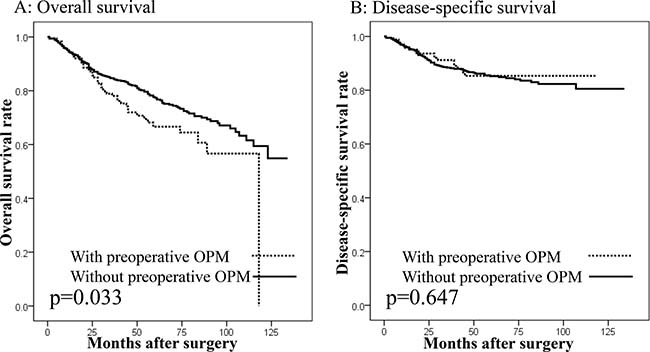 Despite great efforts of gastrointestinal endoscopists to detect second or third lesions of GC, it is difficult to avoid missing lesions in cases of SMGC [7]. Various function-preserving procedures, such as endoscopic resection and limited gastrectomy, are performed for the treatment of GC [8]. However, these procedures lead to a larger remaining area of gastric mucosa with malignant potential in GC patients. Previous reports have demonstrated that SMGC are observed in 4–10% of GC patients [1, 7, 9], and the present study also showed a similar proportion. There are several risk factors for SMGC, such as advanced age, differentiated histology, and early GC [1]. Accordingly, in the present study, these factors were identified as independent risk factors of SMGC, consistent with previous studies.

In these situations, a relationship between OPMs and SMGC is currently being examined. Ojima et al. [5] reported that the presence of SMGC is a risk factor of synchronous colorectal cancer, while Kim et al. [6] reported SMGC as a predictive factor for future metachronous OPMs. Taken together, these studies suggest the presence of a common oncological or epidemiological factor that causes both MGC and OPMs. Miyoshi et al. [15] reported that microsatellite instability due to mutations of mismatch repair genes plays an important role in the development of MGC. Such genetic disorders have been demonstrated to be associated with the development of colorectal cancer, as well as other cancers, such as esophagus, thyroid, and prostate cancers, among others [16–20]. A genetic disorder, like a mismatch repair gene mutation, may be a common factor underlying the development of MGC and OPMs. The present study demonstrated that the presence of SMGC is a risk factor for the occurrence of OPMs postoperatively, as well as preoperatively. Several OPMs, including thyroid, esophagus, and colorectal cancers, were noted significantly more frequently in SMGC patients, both preoperatively and postoperatively, compared to in non-SMGC patients. Therefore, SMGC patients should be carefully assessed for the presence of these cancers, and gastrointestinal endoscopists, gastroenterologist, and surgeons should keep the relationship between SMGC and OPMs in mind.

The major determinant of prognosis in GC patients is the cancer stage, rather than the lesion number [1]. Our results showed that there were no differences in OS or DSS between the patients with or without SMGC. On the other hand, the presence of a preoperative OPM was an independent prognostic factor for OS. Our previous study also showed that GC patients with synchronous OPMs had a worse outcome after surgery than those without it [14]. Furthermore, Kim et al. [6] regarded that the presence of synchronous and metachronous OPMs negatively affected the clinical outcome of GC survivors. Our results suggest that OPMs may be associated with an increased risk of death. To improve the outcomes of GC patients, clinicians should make particular efforts to detect OPMs in patients with SMGC. It is important to consider the possibility of OPMs, especially in the organs where OPMs frequently occur. Routine esophagogastroduodenoscopy and colonoscopy are useful for detecting esophageal and colorectal cancers, respectively. However, the detection of cancers such as prostate and thyroid cancers is associated with a number of problems, including risks of overdiagnosis and overtreatment [21, 22]. Establishment of a standardized screening method for the detection of OPMs could contribute to improved survival in SMGC patients.

Our study has some limitations. First, our data included no information regarding the patients’ familial history, staging of OPMs, and Helicobacter pylori infection status. Helicobacter pylori cause chronic gastritis, leading to cancer in the stomach [23], and might contribute to the incidence of MGC. Second, the follow-up period was not enough to detect all future GCs or OPMs.

In conclusion, because patients with preoperative OPMs have a high risk of SMGC, careful preoperative examination is recommended to improve the patients’ prognosis.

SMGC was assessed by pathologic examination using the resected stomach samples, and the results were compared with the preoperative esophagogastroduodenoscopy findings. Multiplicity of GC was determined by the criteria of Moertel et al. [24], as follows: (1) two or more GCs must be pathologically proven to be malignant, (2) all lesions must be separated macroscopically by an area of normal gastric wall, and (3) the possibility that one of the lesions represents local extension of a metastatic tumor must be ruled out beyond reasonable doubt. Synchronicity of MGC was defined according to the criteria of Warren and Gates [25]. When two primary cancers were detected within 1 year, they were considered synchronous. When two primary cancers were detected more than 1 year apart, they were considered metachronous. The pathological features of the MGC were defined by main lesion, which is more advanced lesion and to be larger lesion if the depth of invasion was same.

Multiple primary cancers arising from other organs were also defined according to the criteria of Warren and Gates [25]. Metachronous multiple primary malignancies included antecedent malignancies before surgery for GC and subsequent malignancies after surgery for GC. In order to identify preoperative risk factors for MGC, we classified the OPMs into two groups: a preoperative group including antecedent and synchronous OPMs, and a postoperative group including subsequent OPMs.

The histopathologic findings of GC were obtained using the resected specimens. The clinicopathologic features of GC were described according to the TNM classification (7th edition).

Before surgery for GC, we performed total colonoscopy when patients were able to consume food. When colonoscopy could not be performed preoperatively, we performed it within 1 year after surgery. Furthermore, we performed whole-body computed tomography in order to detect OPMs. When malignancies were suspected in other organs, we added several examinations specific to the suspicious organs. After gastrectomy, the GC patients were followed in the outpatient clinic of each hospital not only to check for recurrence and metastasis of GC, but also to detect OPMs, by esophagogastroduodenoscopy, colonoscopy, and whole-body computed tomography. Furthermore, when the patients complained of symptoms other than those in the abdomen, we consulted clinical specialists.

Data are shown as the prevalence (%) or mean values. Continuous variables were compared using the Mann-Whitney test, and categorical variables were compared using the Chi-square test or Fisher’s exact test, depending on their distribution. Multivariate analysis of independent risk factors was carried out by multiple logistic regression tests, and prognostic factors were analyzed by Cox’s proportional hazard models. The survival rates after gastrectomy were calculated by the Kaplan-Meier method. The data were analyzed using IBM SPSS 22.0 (IBM Japan, Tokyo, Japan). For all analyses, P < 0.05 was considered significant. Missing data were accounted for using a list-wise deletion approach.

We wish to thank the help in the study given by Prof. Shinichi Miyagawa.