Objective: Leukocytes are hypothesized to reflect the inflammatory tumor microenvironment. We aimed to validate their prognostic significance in a large cohort of patients treated with pre-operative radiation for locally advanced rectal cancer (RC).

Conclusions: Pre-radiation NLR is a simple and robust biomarker for risk stratification in locally advanced RC patients undergoing pre-operative radiotherapy, and might select the subpopulation eligible to treatment intensification or to neoadjuvant chemotherapy.

Material and Methods: Clinical records from consecutive patients treated in a single institution between 2004 and 2015 with curative-intent radiotherapy were retrospectively analyzed. Classical prognosis factors of RC and peripheral immune markers based on lymphocytes and neutrophil counts were studied.

In a recent meta-analysis, the 7-year overall survival (OS) rate of stage II/III locally advanced rectal cancer (RC) patients was 62% despite optimization of the treatment planning process and integration of systemic agents to improve treatment efficacy [1]. Currently identified prognosis factors for survival (T stage, age, grade, number of examined lymph nodes and number of positive nodes [2]) are therefore not discriminant enough to detect patients with the highest risks of tumor relapse. Identification of new biomarkers is crucial in order to isolate the subpopulation that might require treatment intensification. Unlike promising but expensive biomarkers based on genetic profiling [3, 4], leukocyte and neutrophil counts are already performed in daily routine, making them accessible regardless of the local technological development. Interestingly, there is a strong rationale suggesting that systemic inflammatory response to tumors is manifested in the peripheral white blood cells [5–7]. In various primary tumor locations, peripheral immune markers (leukocytosis, neutrophilia, neutrophil to lymphocyte ratio (NLR)) were recently suggested to be possible biomarkers of radiosensitivity, predicting local relapse and survival in patients treated with definitive chemoradiation [5, 7, 8]. The NLR was suggested to be an independent prognostic factor for recurrence and mortality in large cohorts of colorectal cancer patients [9, 10] and in small cohorts of RC patients [11–15]. However, to our best knowledge, the impact of peripheral immune markers on prognostication has never been assessed specifically in a large cohort of locally advanced RC patients.

The aim of the present study was to analyze whether peripheral immune markers of locally advanced RC patients was associated with local tumor control and global outcome.

Percentages were calculated based on the population of each column.

Table 6: Prognostic factors for Overall Survival based on univariate and multivariate analysis (n = 257 patients with 45 deaths) 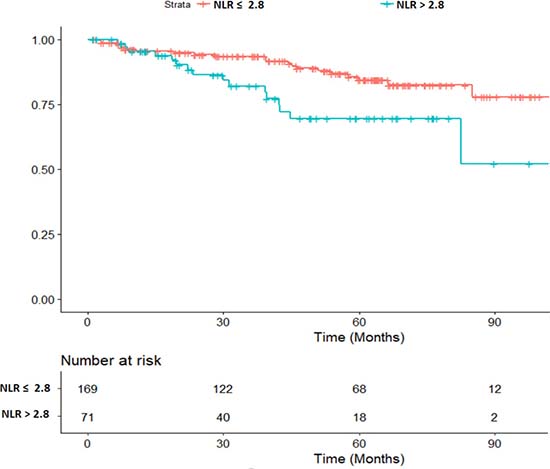 Independent predictive factors of efficacy were retrospectively analyzed in a large cohort of RC patients in the present study, with a special focus on peripheral immune biomarkers. Pre-radiation NLR was an independent predictive factor of local relapse, of PFS, of OS and was marginally associated with complete pathological response, suggesting a value as a possible biomarker of radio-sensitivity. Combined index of peripheral neutrophil and lymphocyte counts (and especially NLR) have been shown to correlate with survival outcomes in numerous malignancies treated with definitive chemoradiation including cervical [16], lung [17] and gastrointestinal cancers [5–7, 9, 13, 14], suggesting that NLR is not specifically related to rectal (or certainly any other type of) cancer. However, the present study is one of the largest series of rectal cancer patients in literature, since numerous previous publications mixed colon and rectal cancer patients.

The NLR is thought to reflect the host’ systemic inflammatory response and immunologic status, through the balance between pro- and anti-tumor activities of immune cells. On the one hand, neutrophils are suggested to induce a pro-tumor effect on the local microenvironment, secreting cytokines recruiting inflammatory cells, favoring angiogenesis [18], invasion [19], tumor growth, and suppressing the adaptive immune response [20] especially through the inhibition of natural killer cells and activated T cells [21]. To our best knowledge, no pre-clinical or clinical study specifically examined the underlying biological mechanisms associated with neutrophils in rectal cancer patients. However, a study was recently conducted in a large series of cervical cancer patients, resulting in appealing theories linking tumor-related neutrophilia and poor outcomes [22]. Neutrophilia (Neutrophil count > 7.5 G/L) at the initial diagnosis was clearly shown to be an independent predictor of compromised survival, indeed. Furthermore, a strong correlation was observed between G-CSF immunoreactivity in patients’ tumors and peripheral neutrophil count, and between G-CSF immunoreactivity and decreased survival, suggesting that the granulopoiesis induced by tumor-derived G-CSF might be the root of tumor-related neutrophilia that finally correlates with poor outcomes. Interestingly, patient outcomes were supported by strong pre-clinical data. In murine models, subjects inoculated with cancer cells expressing tumor-derived GCSF were reported to significantly develop more myeloid-derived suppressor cells (a subpopulation enhancing tumor progression by stimulating tumor angiogenesis, metastasis and immune suppression) in blood, bone marrow and tumor, resulting in more aggressive tumors. Interestingly, cancer cells expressing G-GSF were significantly less sensitive to radiation tha t control cancer cells, through yet unclear processes [22]. On the other hand, lymphocytes are thought to have an anti-tumor effect, since it is now known for a long time that tumor infiltration of CD4+ and CD8+ cells is associated with improved survival in RC patients [23, 24]. Furthermore, lymphocytes are suggested to play a crucial role in cancer immune surveillance and immunoediting [25], probably explaining why patients with high lymphocyte densities achieve long term local and distant control after resection [23]. Elevated NLR could therefore reflect the predominance of neutrophils’ pro-tumor activity and/or the weakness of the lymphocytes’ anti-tumor immune response. The exact biological phenomena underlying the fact that patients with elevated NLR show unfavorable local and overall outcome are still investigated, but taken together, all results seem to indicate that the NLR is a simple and robust biomarker for risk stratification in locally advanced RC patients, with a threshold ranging from 2 to 5 in literature [26, 27]. Although the relation between peripheral immune biomarkers and radiation sensitivity is not yet established, the influence of tumor micro-environment and radiosensitivity has been clearly demonstrated [28–30]. The present findings support the hypothesis that immune cell counts, which presumably reflect host conditions, may critically affect responsiveness to radiation.

These results are of primary interest since conventional prognostic factors currently fail to identify patients with the highest risk of local and metastatic recurrence, with more than 40% of patients experiencing lethal relapse. The present findings could therefore contribute to isolate a subpopulation eligible for treatment intensification (radiation dose escalation and/or chemotherapy optimization) at the outset. The current standard of care for locally advanced RC is a neoadjuvant chemoradiotherapy [31, 32] followed by definitive resection. A post-operative chemotherapy is indicated only when bad prognosis factors are identified after rectal surgery, inducing favorable results on local recurrence and PFS [1] but disappointing results on OS [1, 33–35]. Post-operative chemotherapy failed to improve OS in all randomized trials using pre-operative chemoradiation followed by total mesorectal excision, indeed. However, less than 50% of eligible patients received the full dose and course without interruption or delays owing to postoperative complications, delayed recovery, or interference caused by ostomy closure. For the same reasons, nearly a third of patients with locally advanced RC never started the indicated adjuvant chemotherapy. In the present study, similar orders of magnitude were reported, with more than a patient out of ten not undergoing the indicated adjuvant chemotherapy, and with about on patient out of two who could not receive the full dose. Therefore, moving the setting of chemotherapy from adjuvant to neoadjuvant is carefully considered, since it is expected to bring a better safety (better bone marrow function, no stoma resulting in less treatment delays and dose reduction because of stoma complications, shorter duration of stoma use) and maybe a better efficacy (early treatment of the micrometastatic disease, better local response making the surgery unnecessary in selected patients). Finally, there is growing evidence suggesting that patients with bad prognosis factors could benefit from a neoadjuvant chemotherapy performed before chemoradiation [36, 37]. Currently known factors of high risk of distant relapse (node involvement, mesorectal invasion, positive circumferential resection margin, advanced T stage) were recently hypothesized to possibly indicate a preoperative chemotherapy. Clinical trials are currently conducted to explore the efficacy of this management, through the RAPIDO (NCT01558921), PROSPECT (NCT01515787), NRG-GI002 (NCT02921256), BACCHUS (NCT01650428) and Rectal Cancer Consortium (NCT02008656) clinical trials. However, since current RC prognosis factors are thought to be not discriminant enough, and since many of them are only available after surgery completion or state-of-the-art MRI, new simple pre-treatment biomarkers are awaited in order to better predict which patients will be non-responders to chemoradiation, and should therefore experience neo-adjuvant chemotherapy. In this context, the pre-treatment NLR seem to be able to bring crucial information on prognostication before treatment initiation, being an independent predictive factor of local recurrence, PFS and OS. Although the retrospective nature of the present study is a limitation, these results should encourage the prospective exploration of peripheral immune biomarkers in RC patients, in order to validate its metrological characteristics.

A retrospective study was conducted at the Lucien Neuwirth comprehensive cancer care center (Saint Priest en Jarez, France). The institutional review board approved the study, which was conducted in compliance with the Helsinki Declaration.

Patients were treated in supine position, and immobilized using leg-positioning foamed wedges. CT-scan images were acquired without contrast agent infusion with a slice thickness of 2.5 mm. Plans were contoured and calculated using the Eclipse treatment planning system (Varian Medical Systems, Palto Alto, CA, USA). Gross tumor volume (GTV), clinical tumor volume (CTV), planning tumor volume (PTV) and organs at risk (OAR) were delineated based on planning-CT. Their definition evolved with the availability and development of CT-scan and MRI, and with the delineation guidelines’ editions. In each case, treatment plans were optimized according to dose limits for OAR and constraints for volume coverage i.e. PTV should receive 95% to 107% of the prescribed dose. Rectal equivalent 2 Gy (EQD2) dose was calculated using the EQD2 formula provided by Fowler [39] and α/β = 6.2 [40].

Follow-up was calculated from the initiation of radiotherapy. After radiotherapy completion, patients were assessed for efficacy every 3 months by surgeons and oncologists during the first two years and every 6 months later, with clinical examination and alternation of chest/abdomen/pelvis- CT-scan and chest radiography and abdominal ultrasound.

Pre-radiation NLR is a simple and robust biomarker for risk stratification in locally advanced RC patients undergoing pre-operative radiotherapy. Indeed, it was correlated with local recurrence, PFS and OS in multivariate analysis. NLR was marginally associated with complete pathological response, suggesting a value as a possible biomarker of radio-sensitivity. These results could lead the way to the accurate selection of the subpopulation of RC patients eligible to neoadjuvant chemotherapy. Although NLR is not a quite new marker, with more than 100 studies on colorectal adenocarcinoma available in MEDLINE, the present data corroborates previous results, in one of the largest cohort of RC Caucasian patients treated with pre-TME radiation. A study examining the underlying biological mechanisms connecting LNR with poor prognosis and local radioresistance in RC patients is still to be carried out. Finally, the retrospective nature of the study induced unavoidable statistical biases that could only be controlled by prospective explorations. Therefore, statistical correlations that were presently suggested should be corroborated by future prospective studies.

Authots declare no conflicts of interest.

31. Sineshaw HM, Jemal A, Thomas CR Jr, Mitin T. Changes in treatment patterns for patients with locally advanced rectal cancer in the United States over the past decade: An analysis from the National Cancer Data Base. Cancer. 2016; 122:1996–2003.