Global burden of neuroendocrine tumors and changing incidence in Kentucky

Background: Neuroendocrine tumors (NETs) have a low incidence but relatively high prevalence. Over the last three decades, the incidence of NETs has risen 6-fold in the United States. We conducted an observational study to compare the incidence of NETs reported to the Kentucky Cancer Registry (KCR) versus that reported to Surveillance, Epidemiology, and End Results Program (SEER). We also provide a systematic review of the state of neuroendocrine tumors worldwide, and compare the available global and local published data.

Conclusions: NETs incidence between 1995 and 2015 show a linear increase in both KCR and SEER databases. Because of this increased incidence it is imperative for community oncologists to familiarize themselves with this entity, which until recently was under-studied and with few viable treatment options.

Neuroendocrine tumors are frequently grouped with other rare malignancies, which limits drug development and clinical trial expansion for this important oncologic entity. Fortunately, the last 15 years have seen rapid changes in awareness and perception of general oncologists toward neuroendocrine tumors. As a result, there is not only an expansion of evidence-based standard of care data for the treatment of these patients, but future therapeutic drug developmental avenues also look promising. Robust epidemiological surveillance of this population helps us recognize the quantum of disease burden and unique patterns of disease presentation, which are key in the use of effective screening, targeted diagnostics, and treatments.

We performed a retrospective analysis of the Kentucky Cancer registry (KCR) and the Surveillance, Epidemiology, and End Results Program (SEER) databases between 1995 and 2015. Studies outside of the U.S. were also analyzed in terms of incidence, anatomical sites, grade, and survival. The aim of the study is to analyze epidemiologic and demographic data of newly diagnosed neuroendocrine tumors in Kentucky and compare this information with currently available global data.

Table 2A: Site-specific prevalence of neuroendocrine tumors in Kentucky

The majority of cases (52%) were low grade, with 22% high grade, 3% intermediate grade, and the rest unknown (Table 2B). Grading of tumors is based on the globally-accepted WHO criteria, which considers Ki 67 <2% low grade, 2-20% intermediate grade, >20% high grade [1]. This grading system might be modified in the future based on recent data from Tang et al. [2] It should be noted that roughly 25% of newly diagnosed NET patients are histologically placed at either G2 or G3. These patients have a distinct clinicopathological course as compared to low grade (G1) NETs.

Table 2B: Grade specific distribution of NETs in Kentucky

Unlike most other malignancies, NETs are usually diagnosed at an early stage. In our study population, 42% had local disease at the time of diagnosis, 22% had loco-regional disease, 22% presented with distant metastatic disease, and the other 14% had an unknown status. Except for those with local disease, where 25% were females as compared to 16% males, the loco-regional and metastatic subgroups did not show any gender discrepancy. Staging has a profound impact on the choice of treatment, with early stage being curative with surgical resection alone, especially for low grade histology. As expected, 52% of our study population underwent surgery alone as the treatment of choice.

Derived from the neural crest cells during development, NETs can arise from various primary sites in the body. Neuroendocrine tumors are commonly found in the gastrointestinal tract but it is not unusual to find neuroendocrine tumors in lungs, pancreas, thyroid, gonads, and other locations [3–5]. Besides site of origin, NETs can also be subdivided between secretory or non-secretory subgroups based on production of hormones or into high grade, intermediate grade or low-grade tumors based on the pathology. There is substantial heterogeneity among all these subgroups in terms of natural history of disease progression, response to therapeutic agents, and overall survival. Despite their low incidence rate, all NETs harbor the potential for malignancy, rendering the term “carcinoid tumor,” adopted by previous researchers, inaccurate. In addition to their misnomer, the diagnosis criteria and classifications of NETs have been under debate since their discovery at the beginning of the last century. JACC, WHO, and ENETS criteria standards differ among each other, and the criteria for NETs from various sites may also vary within the same guideline. Along with the lack of population-based NET registries across the world in general, these variances have prevented us from elucidating the worldwide epidemiology of NETs over time. Rather, a multitude of studies emerged to assess the prognostic value of each classification scheme. In this systematic review, we examined NET cohort studies by country, focusing on the profile of NET composition and incidences, to gain a worldwide perspective of NET epidemiology.

Consistent with the SEER database, the most common NET sites in KCR database were lung, small intestine, and rectum-anus (Table 2A) [6]. A nation-wide study from Netherland also reported pulmonary NET being the most prevalent. In contrast, two studies from Denmark and Sweden reported small intestine NETs to be most prevalent [7, 8]. If only gastroenteropancreatic neuroendocrine tumors (GEP-NETs) were considered, studies in Argentina, France, and Norway reported the small intestine as being the most common anatomical location [9–11]. Table 3 summaries the three most prevalent NET sites globally. Appendix NET was prevalent among Western countries in general, which could be explained by accidental findings during appendectomy. The survival rates of appendix NET were also the most optimal, which might also result from early detections (Table 4). In contrast, rectal NET was particularly common in Asian populations [12–15]. Whether these distinctions resulted from genetic variations needs further research.

1Values in parentheses are % of study cohort.

From a global perspective, few countries reported grading data according to Ki-67 and/or mitotic counts due to the continuously evolving grading systems. The percentages of each grade varied among studies. Although a nation-wide, multicenter study in Korea reported a high G1 percentage of 92.3%, a regional study in China indicated that 73.9% of all graded cases were G3. Nevertheless, a consistent impression among all studies was that lower grade NETs demonstrated a better outcome in terms of survival. Tables 4 and 5 summarize global NET 5-year overall survival by site and by grade. Grade 1, Grade 2, and Grade 3 in our Kentucky population were 67.5%, 28.6%, and 3.9%, respectively (Table 2B). Table 6 summarizes global prevalence of NETs by grade. Our data underscores the fact that roughly 25% of newly diagnosed NET patients in Kentucky present with either G2 or G3 histology. This is a significant number considering these intermediate grade and high grade NETs are often aggressive and have very limited treatment options.

Table 6: Percentages of NET subtypes categorized according to WHO2010 criteria, reported by country

Unlike most malignancies, NET incidence has shown a constant incline. The cause of this increase is not entirely clear but experts have attributed the pattern to an increased awareness and improved diagnostics. The hike in incidence of this otherwise rare tumor has alerted public health stakeholders, which has resulted in establishment of specialized NET registries worldwide [16, 17]. A seminal paper from Yao et al. showed a 5-fold increase in incidence of NET from 1973 to 2004 [3]. Incidence of NET per Yao’s report is estimated to be 5.25 cases per 100,000 population. Similar observations were made by Tsikitis et al. in the GI NET subgroup [18]. Per their report, overall incidence of GI NETs increased in all sites except for appendix tumors. In Germany, the age-standardized incidence increased from 2.7 to 3.4 fold from 1976 to 2006 [19]. In Italy, the incidence increased from 0.7 to 5.3 between 1976 and 2010 [20]. Based on recently published papers, increasing trends were also observed in China Japan, Korea, Norway, Netherlands, and Taiwan [11-15, 21]. Outside of the United States, incidence rates ranged from 1.41 to 5.86 based on studies published after 2000 [13, 15, 19, 20, 22-25]. Based on our analysis, the incidence of NETs reported in Kentucky according to the KCR database increased from 3.1 (1995) to 10.3 (2015) per 100,000 cases. In contrast, according to SEER data, the incidence increased from 3.9 to 6.61 between 1995 and 2012 (Figure 1). 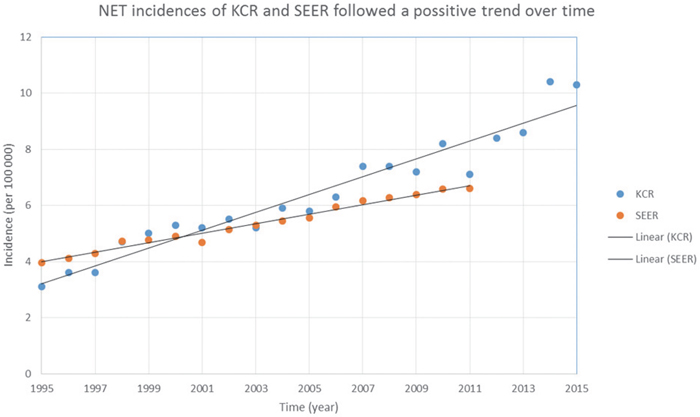 Since the beginning of the last century, the nomenclature, diagnostic criteria and classification of NETs have been evolving. “Carcinoid tumor”, a previous term adopted by several early studies, was inaccurate because all NETs harbor the potential for malignancy [7, 26–30]. Older versions of the International Classification of Disease for Oncology excluded benign NETs. The WHO has changed grading criteria over time. All of these inconsistencies prevent achieving a clear comparison of different epidemiology studies overtime. Most countries do not have a nation-wide, population based NET registries. Single-center or regional studies cannot assess national incidence and prevalence convincingly.

KCR is a part of NCI’s SEER program and has been collecting population-based cancer data since 1986. We sought Institutional Review Board approval prior to commencement of our study, then proceeded to review the KCR and SEER databases for all newly diagnosed neuroendocrine tumors in Kentucky between 1995 and 2015. Incidence data were adjusted for population. Multivariate analysis was performed using SPSS to analyze various demographic and disease-specific study variables. Tumors were characterized by primary sites. Grading was based on the globally-accepted WHO criteria, which considers Ki 67 <2% low grade (G1), 2-20% intermediate grade (G2), >20% high grade (G3) [1].

NETs incidence between 1995 and 2015 showed a linear increase in both KCR and SEER databases. NET incidence has undoubtedly increased over the past two decades. It is imperative for community oncologists to familiarize themselves with this entity, which until recently was under-studied and without many viable treatment options.

This research was supported by the Cancer Research Informatics Shared Resource of the University of Kentucky Markey Cancer Center (P30CA177558). Authors would like to acknowledge Donna Gilbreath and Cathy Anthony for assistance in preparation of this manuscript.

1. Bosman FT. WHO classification of tumours of the digestive system. World Health Organization, International Agency for Research on Cancer. 2010.

22. Niederle MB, Hackl M, Kaserer K, Niederle B. Gastroenteropancreatic neuroendocrine tumours: the current incidence and staging based on the WHO and European Neuroendocrine Tumour Society classification: An analysis based on prospectively collected parameters. Endocr Relat Cancer. 2010; 17: 909-918.

35. Ploeckinger U, Kloeppel G, Wiedenmann B, Lohmann R. The German NET-Registry: An audit on the diagnosis and therapy of neuroendocrine tumors. Neuroendocrinology. 2009; 90: 349-363.