Leptin is a peptide hormone that has been characterized as the ligand of leptin receptor (LEPR). The observation of leptin secretion and leptin receptor expression beyond the normal tissues suggests the potentially critical roles other than its physiological function. In addition to the original function in controlling appetite and energy expenditure, leptin-mediated signaling axis through leptin receptor is multifunctional which plays role in the regulation toward broad types of cancer. Emerging evidences has indicated leptin’s function in promoting several processes which are relevant to cancer progression including cell proliferation, metastasis, angiogenesis and drug resistance. We relatively display leptin and leptin receptor expression levels in pan-cancer panel based on the transcriptome analysis via dataset The Cancer Genome Atlas (TCGA), and show the clinical association of the axis in predicting cancer prognosis. The results indicate the pathological impacts of this axis on many types of cancer. This review mainly focuses on leptin-mediated effects and its downstream signaling related to the progression of cancers, and displays the clinical significance of this axis including the impact on cancer patient survival.

Leptin is the product of Ob (LEP) gene cloned in1994 by Friedman and colleagues, and was called leptin after the Greek “leptos” meaning thin [1]. Leptin was identified as a peptide hormone released by adipocytes which primarily functions as the ligand of leptin receptor (LEPR) to regulate appetite and energy expenditure [2, 3]. The recent discovery of leptin and leptin receptor expression level beyond the traditional tissues indicates that the signaling axis has a critical role outside of its physiological function. The tissues with leptin expression include placenta, stomach, fibroblast, mammary epithelium, and skeletal muscle [4–7]. Furthermore, emerging studies pointed out its expression in broad range of cancer types and also the leptin-dependent signaling in regulating several important factors in cancer progression including tumor proliferation, metastasis, angiogenesis and drug resistance. In this review, we focus on the pathological function of leptin-leptin receptor in cancer, and further illustrate the clinical significance based on the correlation with cancer patient outcomes. 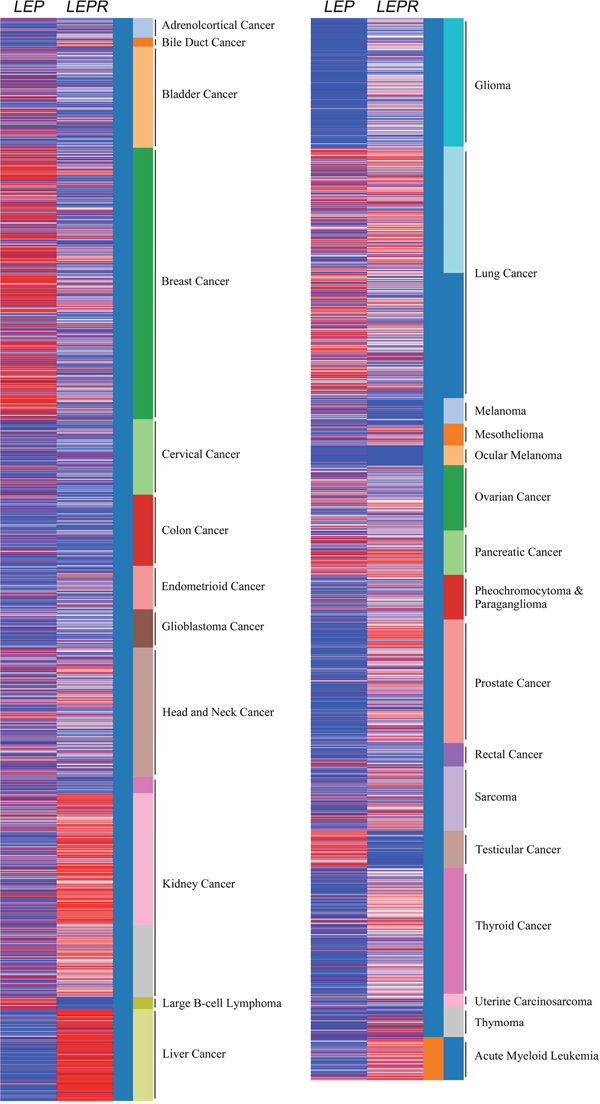 The correlation with clinical outcome

Table 1: The correlation of leptin with cancer patient survival

Table 2: The correlation of leptin receptor with cancer patient survival

Leptin had been pointed out to regulate cell proliferation particularly in various type of cancer cells. The function in inducing ovarian cancer cell growth was mediated by the increased cyclin D1 and Mcl-1 expression via the activation of the MEK/ERK1/2 and PI3K/Akt signaling pathways [21]. Leptin was reported to promote the increase of esophageal adenocarcinoma OE19 cell proliferation, and the effect was observed to be inhibited by adiponectin receptor axis-mediated suppression of ubiquitin-like with PHD and ring finger domains 1 (UHRF1) [22]. Moreover, leptin alone and co-treatment with secreted phospholipase A2-IIA (sPLA2-IIA) elicited phosphorylation activation of Src/ERK/Akt/mTOR/p70S6K/rS6 pathway leading to increase of 1321N1 human astrocytoma cell proliferation [23]. In breast cancer, low dosage addition of leptin (0.625 nM) significantly induced breast cancer cell growth via increased cell cycle transition. The expression of cell cycle and apoptosis associated factor including p53 and p21WAF1/CIP1 were further proved to be altered [24]. Another study further pointed out the positive correlation between leptin expression and proliferation pathway including leptin receptor, aromatase, mitogen activated protein kinase (MAPK) and signal transducer and activator of transcription-3 (STAT3) in breast cancer patients with estrogen receptor expression and obesity, suggesting the effect of leptin-leptin receptor axis in tumor microenvironment [25]. Similar findings from co-culture system had been reported that the leptin produced by obese adipose stromal/stem cells could enhance proliferation in estrogen receptor positive breast cancers [26]. In addition, the mediator of leptin-leptin receptor in triggering tumor proliferation was identified. APPL1 could directly bind to both STAT3 and leptin receptor to elevate leptin-induced phosphorylation of Akt, ERK1/2 and STAT3 in breast cancer MCF-7 and human hepatocellular carcinoma HepG2 [27], while a reverse function in rat hepatocellular carcinoma proliferation was also reported, this is, via a p38-MAPK-dependent signalling pathway in vitro to reduce serum-stimulated H4IIE HCC cell proliferation [28]. In human gallbladder cancer, the experiment result also demonstrated the function of leptin in promoting cell proliferation through leptin receptor (OB-Rb), revealing the requirement of leptin receptor in leptin-dependent cancer progression [29]. Clinically, the involvement of leptin receptors expression in proliferation of colorectal carcinoma patients had been observed. Absence in expression level of leptin receptor correlated with low tumor proliferation rate in 94.1% of the cases, while high proliferation rate associated with 92% of the cases with pronounced expression [8].

Leptin receptor appears to be expressed in various types of cancer, suggesting the leptin axis function other than appetite regulation. In human hepatocellular carcinoma, leptin/leptin receptor expressions were detected in both tumor and endothelial cells in parallel with the degree of angiogenesis [39]. In 92% of the colorectal carcinoma cases with pronounced leptin receptor expression, high rate of angiogenesis case was observed alone with the correlation of low grade neoangiogenesis and leptin receptor absence (88.2% of the cases) [8]. In addition, the correlation of leptin receptor with vasculogenic mimicry (VM) formation had been reported in glioblastoma [15]. Moreover, HIF-1α RNA and protein expression of leptin and leptin receptor were high in tissue samples of oral squamous cell carcinoma which indicated the potential crosslink in regulating angiogenesis [40]. Direct evidence had been revealed in the study of human chondrosarcoma cells. Leptin could induce VEGF-C expression and secretion leading to the lymphangiogenesis of human lymphatic endothelial cells via repressing miR-27b [41]. Induction of VEGF-A expression by leptin were found in melanoma tumor [42]. The leptin-mediated regulation toward tube formation of endothelial progenitor cells was also shown in chondrosarcoma cell study. MAPK signaling was activated to enhance AP-1 binding to VEGF-A promoter for transactivation by leptin-leptin receptor axis in cancer cells [43]. Furthermore, HIF-1α and NFκB were proposed as the major route in leptin-dependent VEGF-A induction in breast cancer [44]. The biological significance of leptin-leptin receptor axis in promoting angiogenesis was further shown by the inhibitory effect of Aca 1 treatment, a peptide leptin receptor antagonist, on endothelial cell tube formation [45], as well as by the Allo-aca (leptin receptor antagonist)-mediated reduction of pathological vascularization in rat ophthalmic neoangiogenesis model [46].

According to the previous findings in publications and in silico analysis from the clinical cancer databases, the expressions of leptin and leptin receptor are found in many types of cancer. The signaling axis also plays critical role in regulating several key processes of cancer progression, including cell proliferation, metastasis, angiogenesis and drug resistance. We demonstrated the relative expression level of leptin and leptin receptor in a pan-cancer panel, and revealed the dramatic upregulation of the leptin-leptin receptor axis in breast cancer, head and neck cancer, lung cancer, ovarian cancer and pancreatic cancer, suggesting the potential critical role of this signaling node in tumor progression. The differential RNA expression in specific cancer types suggest the potential alternation in upstream transcriptional activity and RNA stability that might be of value for further investigations in tumorigenesis and cancer progression. In clinical, leptin and leptin receptor serves as poor prognostic markers in variant types of cancer including ovarian cancer, colon cancer, AML, gastric cancer, while the prediction of good outcome by the same axis has also been observed in soft tissue cancer. This might result from potential involvement of other signaling in complicated interaction network contributing to the different outcomes in specific caner type. Obviously, the prognostic function of the axis in breast cancer is currently under debate which might be due to the variances in analytic platform and endpoint that remains to be explored. It is noted the difference in amount of cases enrolled in cohorts also limit the prognostic power, and sufficient patient number for predicting the outcome and reflecting the reality is hard to be determined. Because there have been a few of reports showing discrepancies regarding leptin-leptin receptor axis’s function in cancer progression, expression level and clinical outcome, the role of leptin-mediated signaling in promoting or inhibiting cancer progression is still unclear in cancer of specific type. In addition to the variation in the experimental procedures, another possibility is that the leptin-mediated stimulatory or inhibitory effects are partly altered by other receptors in various types of cancer. It is noted that the relative expression levels of leptin and leptin receptor were not uniformly distributed in the pan-cancer cohort, which provides a basis for the pathological involvement of other leptin receptors in tumors, which requires further exploration.