We concluded that histogram-based parameters skewness, kurtosis and entropy of Ktrans, Ve, and Kep can be used as markers for proliferation activity, cellularity and nucleic content in HNSCC. Tumor grading influences significantly associations between perfusion and histopathological parameters.

Dynamic contrast-enhanced magnetic resonance imaging (DCE MRI) is a modality to characterize perfusion and vascularization of tissues [1–3]. According to the literature, parameters of DCE MRI can differentiate between malignant and benign lesions in several organs [1, 3]. DCE MRI can also distinguish low and high grade tumors [4–6]. Furthermore, some reports identified significant associations between DCE MRI findings and histopathology in several malignancies [7–9]. So Li et al. showed that the perfusion parameters significantly correlated with microvessel density in breast cancer [7]. Additionally, Jain et al. found that DCE MRI was associated with proliferation index KI 67 in glioma [8]. In HNSCC, it has been shown that DCE MRI parameters reflected well microvessel density [9].

The purpose of this study was to analyze possible associations between histogram analysis parameters of DCE MRI and histopathological findings like proliferation index, cell count and nucleic areas in HNSCC.

On the next step, separate correlation analyses in the low and high grade HNSCC were performed. In G1/2 tumors, only Ktrans entropy correlated well with total (P = 0.78, P = 0.013) and average nucleic areas (P = 0.655, P = 0.006) (Table 2). There were no other statistically significant correlations or correlation trends between the parameters.

Only statistically significant correlations and statistical trends are shown

As mentioned above, previously, numerous studies analyzed DCE MRI findings in HNSCC [16–21]. It has been shown that perfusion parameters predicted tumor behavior and, therefore, can be used as biomarker [16–21]. So far volume of Ve is one of the independent prognostic factors for neck control in HNSCC treated with chemoradiation [16]. Furthermore, Kim et al. investigated lymph node metastases in HNSCC and found that low pretreatment Ktrans was associated with a poor response to concurrent chemoradiation therapy [18]. Finally, Chawla et al. showed that lower pretreatment Ktrans correlated with shorter disease-free survival [19].

The reported results suggested that DCE MRI parameters should be associated with relevant histopathological features in HNSCC. Previously, only two studies analyzed possible relationships between DCE MRI and histopathology in patients HNSCC [9, 22]. So Jansen et al. identified statistically significant correlations between KI 67 and Ktrans, Ve, as well between Kep and vascular endothelial growth factor (VEGF) in neck nodal metastases of HNSCC [22]. However, other authors did not find statistically significant correlations between DCE MRI parameters and KI 67 or tumor cellularity in HNSCC [9]. Presumably, these controversial results may be related to the fact that the studies investigated different parameters: in one study [22] standard deviation and in another [9] mean values of DCE parameters were analyzed. There is also another problem, namely the previous analyses investigated small number of patients, namely 12 [22] and 16 [9]. This fact also relativizes the reported results.

We hypothesize that DCE MRI should have more significant correlations with histopathology than reported previously. Especially Ve and Kep should be associated with cellularity. This suggestion seems to be logical. In fact, Ve represents volume of the extravascular extracellular space [23, 24] and, therefore, may be associated with cell count. Furthermore, the assumed correlation between Ve and cellularity should be inversely, namely more cells-less extracellular space and vice versa. In fact, in an experimental study with glioma model, a strong inverse correlation (r = –0.75) between Ve and cellularity could be identified [25].

Similarly, Kep reflects diffusion of contrast medium from the extravascular extracellular space back to the plasma [23, 24], and may also have relationships with tumor cellularity. Previous studies indicated correlations between Ktrans and microvessel density in several malignancies [7, 9]. Also some authors suggested that Ktrans correlated with proliferation activity (KI 67 expression) in hepatocellular carcinoma [26]. However, this did not apply for all lesions [8, 9]. On the other hand, Ktrans reflects diffusion of contrast medium from the plasma through the vessel wall into the interstitial space [23, 24], and, therefore, may also have significant correlations with tumor cell count.

The present study confirmed these assumptions. Here, interestingly phenomena were identified. Proliferation activity slightly correlated with the minimum of Ktrans and Ve and tended to correlate with several percentiles of both parameters. Furthermore, stronger correlations were observed between histogram-based parameters skewness, kurtosis and entropy and different histopathological findings. So kurtosis of Ktrans correlated statistically significant with cell count and tended to correlate with KI 67, and skewness of Ktrans correlated with KI 67. Entropy of Ve correlated with KI 67 expression, cell count, and total nucleic area. Finally, entropy of Kep correlated with KI 67. In contrast to the previous reports, neither standard deviation nor mean values of the investigated perfusion parameters showed significant correlations with histopathological findings. These findings indicated the following: firstly, routinely used perfusion parameters (mean, median or standard deviation) are non sensitive to reflect relationships with cellularity and proliferation activity in HNSCC. Secondly, histogram-based parameters are better associated with proliferation activity, cellularity and nucleic areas in HNSCC. This finding is very important for clinical practice and implicates use of histogram-based DCE MRI parameters to predict histopathological features in HNSCC.

Furthermore, our study identified also another phenomenon, namely associations between perfusion parameters and histopathology is different in different tumor grades. Significantly more correlations and trends are seen in G3 tumors than in low grade lesions. The exact cause of this finding is unclear. Presumably, high grade carcinomas have other architecture, including relationships between tumor cells, especially cell size or volume and extracellular space, as well nucleic-cytoplasmic ratio. Also other features like stroma and microvessel density etc. may also play a role. These factors results in different associations between histopathology and perfusion parameters derived from DCE MRI. Clearly, further works with more cases are needed to confirm this hypothesis. Also search for relevant associations between histogram analysis DCE MRI parameters and other histopathological features like invasiveness should be performed in HNSCC.

This study was IRB-approved and all patients gave their written informed consent.

Table 4: Localization and stage of the identified tumors 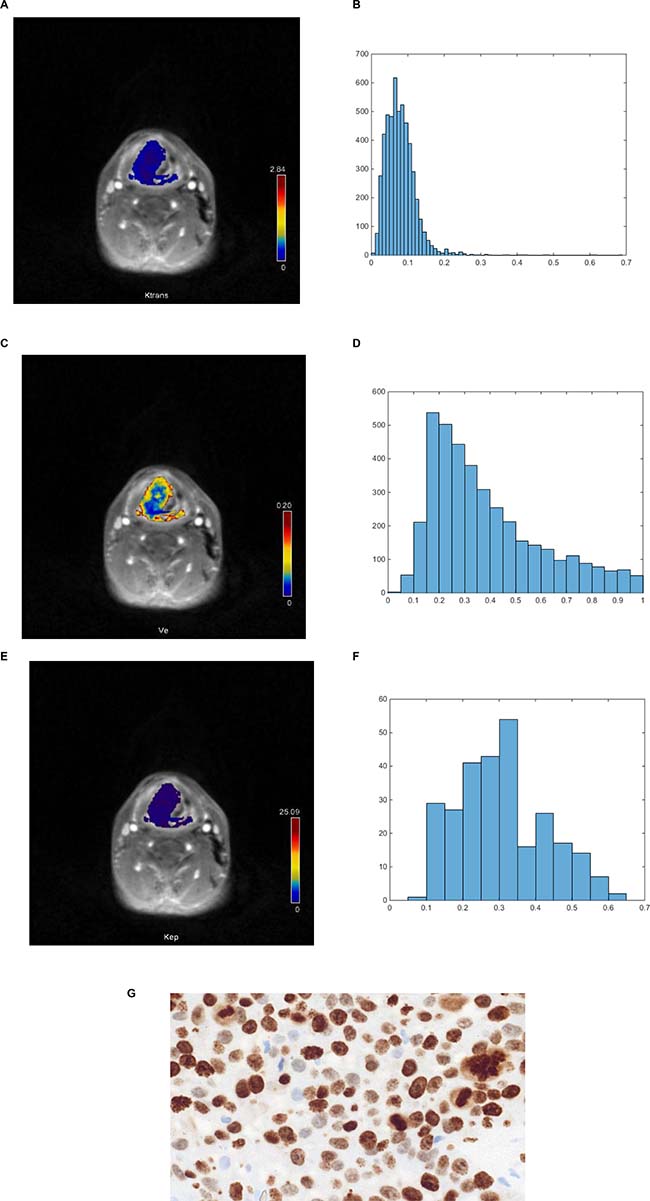 • Ktrans or volume transfer constant representing the diffusion of contrast medium from the plasma through the vessel wall into the interstitial space;

• Ve or volume of the extravascular extracellular space (EES);

• Kep or parameter for diffusion of contrast medium from the EES back to the plasma.

On the next step, the saved DI COM images were processed offline with custom-made Matlab-based application (The Mathworks, Natick, MA, USA). Thereafter, polygonal ROIs were automatically drawn on all of the transferred maps along the contours of the primary tumor on each slice (whole lesion measure) according to the previous description [12]. For every perfusion parameter (Ktrans, Ve, and Kep), mean, maximal, minimal, and median values, as well percentiles 10th, 25th, 75th, and 90th were estimated (Figure 1) according to our previous description (). Furthermore, histogram-based characteristics: kurtosis, skewness, and entropy were also calculated.

In every case, sections from formalin-fixed and paraffin-embedded tissue were cut at 5 μm and stained with Ki 67 antigen (MIB-1 monoclonal antibody, DakoCytomation, Denmark). Thereafter, the histopathological images were digitalized by using the Pannoramic microscope scanner (Pannoramic SCAN, 3DHISTECH Ltd., Budapest, Hungary) with Carl Zeiss objectives. In every case, the whole sample was acquired at high resolution. Via the integrated Pannoramic Viewer 1.15.4 (open source software, 3D HISTECH Ltd., Budapest, Hungary) the acquired slides were evaluated and three captures with a magnification of ×200 were extracted and saved as uncompressed Tagged Image File Format (TIFF). Furthermore, the digitalized images were analyzed by using ImageJ software 1.48v (National Institutes of Health Image program) with a Windows operating system [27–30]. For this study, the following histopathological parameters were calculated:

• Tumor proliferation index as relation of KI 67 stained nuclei divided by all nuclei [25, 26]. Though for the analysis the area with the highest number of positive tumor nuclei was selected (Figure 1);

• Cell count as a number of all nuclei;

• Total nucleic area (μm²) as area of all nuclei;