MiRNAs are 20–22 nucleotide-long non coding RNAs that, following binding to complementary sequences in the 3′ UTR of an mRNA, repress translation or induce mRNA degradation. Therefore, miRNAs are considered major regulators of gene expression in both normal and neoplastic cells [1]. Since they can be found in plasma, either free or inside tumor-derived vesicles that can fuse to cells of different lineages, miRNAs can regulate gene expression also at distance [2–4].

Table 1: Main features of children with NB and healthy children

Then, the expression of 671 unique miRNAs was evaluated by high-throughput RT-qPCR [18] in four samples randomly selected from each group. Despite the clinical, demographic and genetic disparities between children with localized and metastatic NB, the miRNA expression levels in BM resident cells did not show significant differences (MiQe for qPCR in Supplementary Table 1 and raw data in Supplementary Table 2). This finding was in accordance with the absence of significant differences in gene expression profiles of BM resident cells from children with localized and metastatic NB [19]. 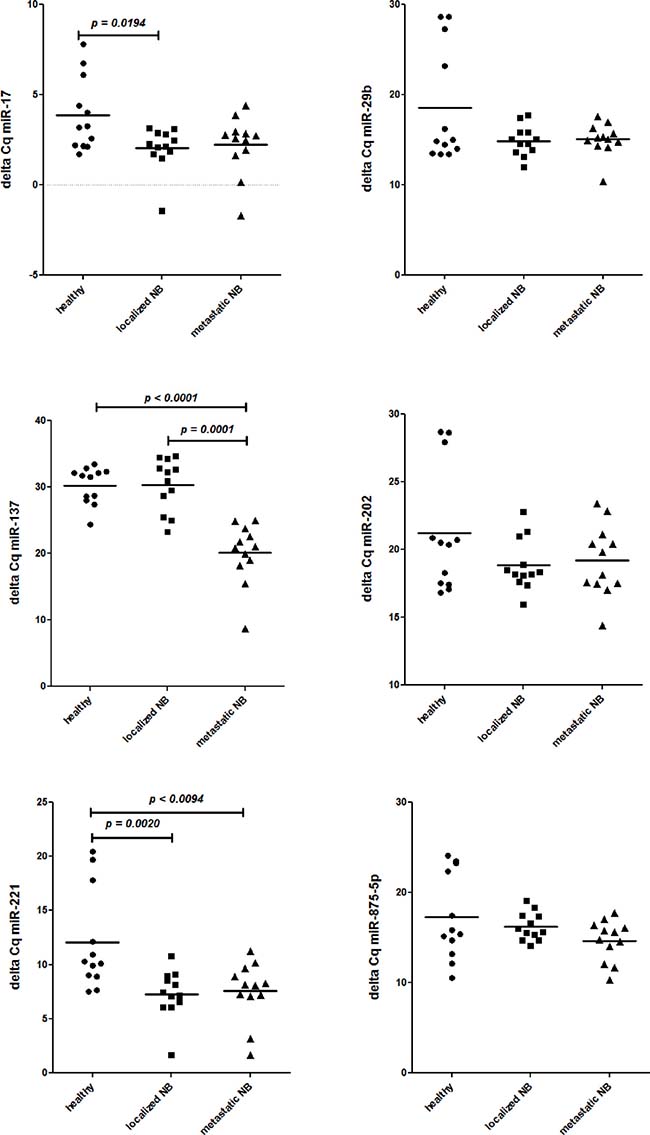 To check whether the increased expression of miR-17, miR-137 and miR-221 in BM resident cells from children with NB, as compared with healthy children, could be ascribed to their release from NB primary tumor cells and/or BM-infiltrating metastatic NB cells [20], the mean expression levels in all these tissues were compared (MiQe for qPCR in Supplementary Table 1, raw data in Supplementary Table 3 and 4, respectively). 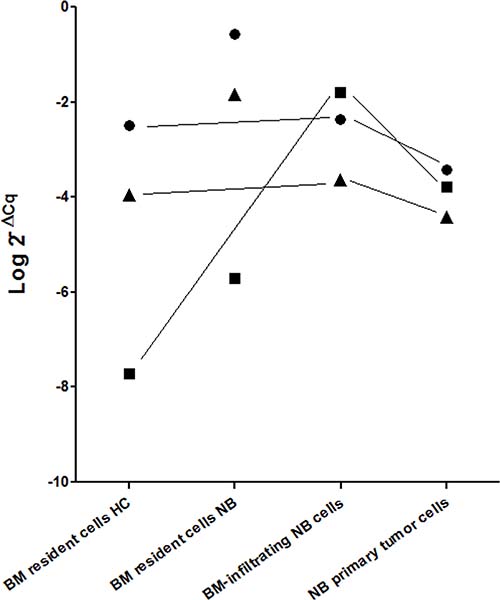 Since only miR-221 over-expression occurred in all patients with NB regardless of presence of metastatic cells in the BM as it is the case of altered erythrocyte maturation [17], we extracted the lists of genes potentially targeted by miR-221 from three different miRNA databases, Targetscan, miRanda and PicTar. In fact, TargetScan predicts biological targets of miRNAs by searching for the presence of conserved 8mer, 7mer, and 6mer sites that match the seed region of each miRNA [21] (http://www.targetscan.org); PicTar uses an algorithm to provide details, such as 3′ UTR alignments with predicted sites and links to various public databases [22] (http://pictar.mdc-berlin.de), and miRanda prediction algorithm optimizes sequence complementarity using position-specific rules and relies on strict requirements of interspecies conservation [23] (http://www.microrna.org/microrna/home.do).

By merging the three target gene lists from the three databases, the unique potential miR-221 target genes were extracted (Supplementary Table 5, left column), and then matched to the list of genes under-expressed by BM-resident cells from children with NB, as compared with healthy children (Supplementary Table 5, right column). The latter list was derived from the GEO dataset GSE90689) [17] that were the most recent dataset available for this type of tissue.

The list of genes under-expressed by BM resident cells potentially targeted by miR-221, shown in Table 3, was then investigated for functional annotation (https://david.ncifcrf.gov/) [24] and pathway analysis (Ingenuity Systems Pathway Analysis, www.qiagenbioinformatics.com). None of the genes shown in Table 3 were involved in heme and porphyrin biosynthesis, whereas two genes, namely BCL2L11 and BNIP3L, were related to mitochondria, where heme and porphyrin biosynthesis occurs.

Table 3: Genes potentially targeted by miR-221 and under-expressed in BM resident cells from children with NB, as compared with healthy children 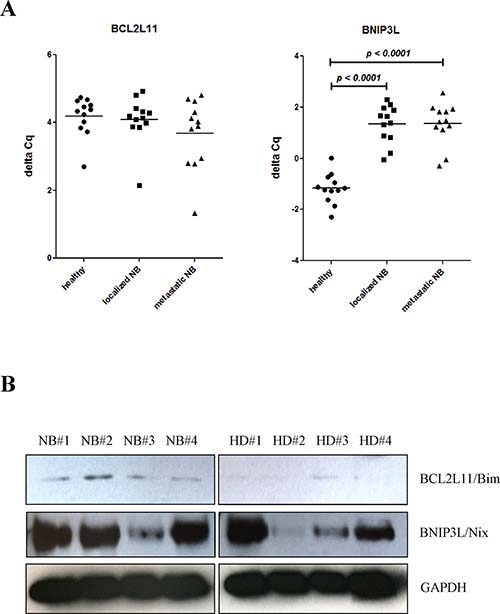 Figure 3: (A) Expression levels (Delta Cq) of BCL2L11 and BNIP3L mRNA in BM resident cells from healthy children (closed circles) and from children with localized (closed squares) and metastatic (close triangles) NB. N = 12 for each group. (B) Western blot analysis of BCL2L11 and BNIP3L protein products, Bim and Nix, respectively, in BM resident cells from four children with NB (NB#1 to #4) and from four healthy children (HD#1 to #4).

The transfer of miRNAs, key regulators of gene expression, is considered as one of the major causes leading to modification of physiological functions occurring in tissues distant from the primary tumor [2–4]. Therefore, we have investigated whether the selective erythrocyte impairment observed in children with NB, regardless of the presence of metastatic cells in the BM microenvironment [17], was mediated by a specific miRNA secreted by NB cells.

Our results did not support this hypothesis. First of all, the miRNA expression profile of BM resident cells from children with NB was not significantly different from that of healthy children. By considering the fold change we identified six miRNAs potentially over-expressed in NB by more than 150 fold, as compared with healthy children. Validation experiments performed in a larger number of samples from each group confirmed the differential expression for 50% of these miRNAs. The low percentage of validated miRNAs may be depended on the high heterogeneity of NB [6] or on the different platform used for the test and validation experiments. This finding was in line with other studies on miRNA expression in NB tumors [9, 10, 12–14, 20].

The genes under-expressed by BM resident cells from children with NB, as compared with healthy children, potentially targeted by miR-221 did not annotate in the pathway of heme and porphyrin synthesis. Two genes, BCL2L11 and BNIP3L, expressed in mitochondria where heme and porphyrin synthesis occurs, were tested for gene and protein expression, but the results did not support a role for them in the impairment of late erythropoiesis. MiR-221 has been implicated in the regulation of early erythropoiesis [26], since its over-expression following lentiviral transfection in CD34+ precursors reduced the levels of its target gene CKIT and impaired stem cell activity. In our dataset, no difference in CKIT expression levels was found, confirming that early erythropoiesis was not impaired in children with NB.

In conclusion, our data did not support the hypothesis that selective erythrocyte maturation may be mediated by miRNAs released by primary NB tumor cells nor by miR-221. However, we cannot rule out the possibility that other miRNAs, not evaluated in the present study, may be involved in the process. Thus, we have made public (see Supplemental Tables) miRNA expression data of BM resident cells from children with NB and from healthy children described here, as well as miRNA expression data of NB primary tumors and BM-infiltrating NB cells that were published previously [20].

Patients included in the study were consecutively diagnosed with NB between January 2007 and December 2008. The main features of the patients are summarized in Table 1. Demographic, genetic, clinical and follow-up data were retrieved from the Italian NB Registry [27]. After diagnosis, patients were treated according to the European protocol suited for her/his risk category, dependent on age, stage and MYCN status [5].

As controls we used BM samples obtained from healthy siblings of leukemia patients admitted at the Gaslini Institute to undergo BM transplants.

Written consent for research use of samples and clinical data was obtained by the legal guardians. The study was approved by the Gaslini Institute Ethical Committee and all analyses were performed according to the Helsinki declaration.

BM resident cells were immune-selected from BM samples taken at diagnosis from 24 children with NB and from 12 healthy children, as previously described [19]. The procedure was applied to all BM samples to rule out the possibility that the procedure per se could influence the results. From each group of samples, i.e., from localized or metastatic NB and healthy children, 4 samples were randomly selected to perform complete miRNA profiling. All twelve samples of each group were used in the validation experiments.

Forty ng of the miRNA fraction were reverse transcribed using the Megaplex RT Primers Human Pool A and B (Thermo Fisher, Milan, Italy). At the end of the reaction, each RT product was amplified with the Megaplex PreAmp Primers A and B for 25 cycles. Then, the amplification products of 4 samples from each group were loaded onto MicroRNA TaqMan Card A and B, respectively. Card amplifications were performed on ViiA7 equipment for 40 cycles (Thermo Fisher). Normalization of expression was made by using the mean expression value of U6 small RNA measured in each card [20].

The lists of genes potentially targeted by miR-221 were downloaded from three public miRNA databases:Targetscan(http://www.targetscan.org/vert_71/), miRANDA(http://www.microrna.org/microrna/home.do) and PicTar (http://pictar.mdc-berlin.de/). The three lists were then merged to obtain a comprehensive list of all the genes potentially targeted by miR-221. The unique gene list was then compared with the list of genes significantly under-expressed by BM resident cells from children with NB, as compared with healthy subjects [19], deposited in National Center for Biotechnology Information Gene Expression Omnibus (GEO, http://www.ncbi.nlm.nih.gov/geo/, accession GSE90689).

One-hundred ng of total RNA from the 36 samples under study were reverse transcribed as described [19, 29], and then amplified in triplicate with the specific TaqMan© human gene expression assays for BCL2L11, BNIP3L and GAPDH (Thermo Fisher, catalog# Hs00708019_s1, Hs00188949_m1 and 4333764F, respectively). Results were expressed as delta Cq by subtracting the Cq value obtained for GAPDH from the Cq value of each target gene [28].

Analysis of miRNA Cq values from high-throughput qPCR assays was conducted using the HTqPCR package [30] of Bioconductor [31], which runs on R statistical computing environment (http://www.R-project.org/). Difference in miRNA expression levels in BM resident cells from the three groups of samples were tested by performing Mann-Whitney rank test. Adjusting p values to face multiple comparison problems were performed according to the Benjamini-Hochberg procedure [32].

All authors read and approved the final manuscript.

This work was supported by Fondazione Italiana per la Lotta al Neuroblastoma (Progetto clinico to M.V.C)