Objective: Loss of caudal-type homeobox transcription factor 2 (CDX2) expression in colorectal cancers (CRCs) has recently been proposed as a promising predictive biomarker for not only prognosis but also response to chemotherapy. However, the relationship between alterations in CDX2 expression during cancer progression and response to chemotherapy remains unclear. We herein aimed to determine the concordance of CDX2 expression between primary CRCs and corresponding liver metastases, in association with chemotherapy.

Methods: A total of 144 consecutive patients with CRC who were treated at a single center in Japan between 2006 and 2014 were included. Formalin-fixed paraffin-embedded whole sections of surgically resected primary CRCs and corresponding liver metastases were assessed for CDX2 expression by immunohistochemistry.

Caudal-type homeobox transcription factor 2 (CDX2) regulates gut epithelial development and maturation [1–4] and is expressed within nuclei of intestinal epithelial cells from proximal duodenum to distal rectum [5]. Increased CDX2 expression, which is observed in approximately 90%–95% of colorectal adenocarcinomas [6, 7], is considered to be a highly sensitive and specific diagnostic marker for adenocarcinomas of intestinal origin [8–10]. In addition to its diagnostic utility, CDX2 is reported to exert tumor-suppressor functions by controlling a number of genes involved in proliferation, migration, and carcinogenesis [11]. However, alterations in the CDX2 expression during cancer progression have not been examined extensively. The possibility remains that genetic diversification and clonal selection might result in changes in CDX2 expression status [12–15].

Chemotherapy plays an important role in the treatment of CRCs. Patients with technically unresectable metastatic CRCs benefit from chemotherapy, which was shown to shift the clinical stage toward a technically resectable condition [20]. Patients with stage III and high-risk stage II CRCs also benefit from adjuvant chemotherapy, as shown by decreased risk of recurrence [21]. In this context, the impact of chemotherapy on CDX2 expression status, which is considered as a promising prognostic marker in CRCs, remains poorly understood, although the expressions of several genes were previously shown to be affected by chemotherapy [12, 22].

In the present study, using whole sections of lesions, we aimed to evaluate alterations in CDX2 expression during cancer progression and to assess the impact of chemotherapy on CDX2 expression in primary CRCs and corresponding liver metastases.

Demographic and clinicopathological characteristics of all CRC patients are summarized in Table 1. Briefly, at diagnosis, mean patient age was 60.1 years, and most of the patients were male (68.5%). A majority of the patients (80.5%) had liver metastases at diagnosis, and there was a median of four metastatic liver tumors (These data were not included in Table 1, and partly included in Table 2). Additionally, a majority of the primary CRCs (96.5%) were well or moderately differentiated by histological assessment. A total of 115 patients (79.9%) had left-sided CRCs. In the present study, 120 out of 144 patients (83.3%) received chemotherapy; among these, 82 patients (68.3%) received chemotherapy only before metastasectomy, whereas the remaining patients (31.7%) received chemotherapy before both primary resection and liver metastasectomy.

To evaluate the expression of CDX2 in CRCs, we performed IHC for CDX2 using whole sections of surgical samples (Figure 1). More than 20% of primary CRCs showed heterogeneous CDX2 expression (Figure 2). To ensure that the clinical judgment used to determine the CDX2 status of specimens was reproducible, the presence of 50% CDX2-positive cells within a whole tumor specimen was used as the cut-off point. Specifically, samples were considered as CDX2-positive if 50% or more of the cancer cells displayed widespread nuclear CDX2 expression, whereas samples were considered as CDX2-negative if less than 50% of the cancer cells showed nuclear CDX2 expression. To assess the robustness of the criterion, concordance between the CDX2 scoring results obtained by two independent investigators were assessed, which revealed a concordance rate of 97.9% (95% confidence interval [CI], 95.5%–99.2%; kappa index, 0.82), indicating that the judgment using the criterion was robust. 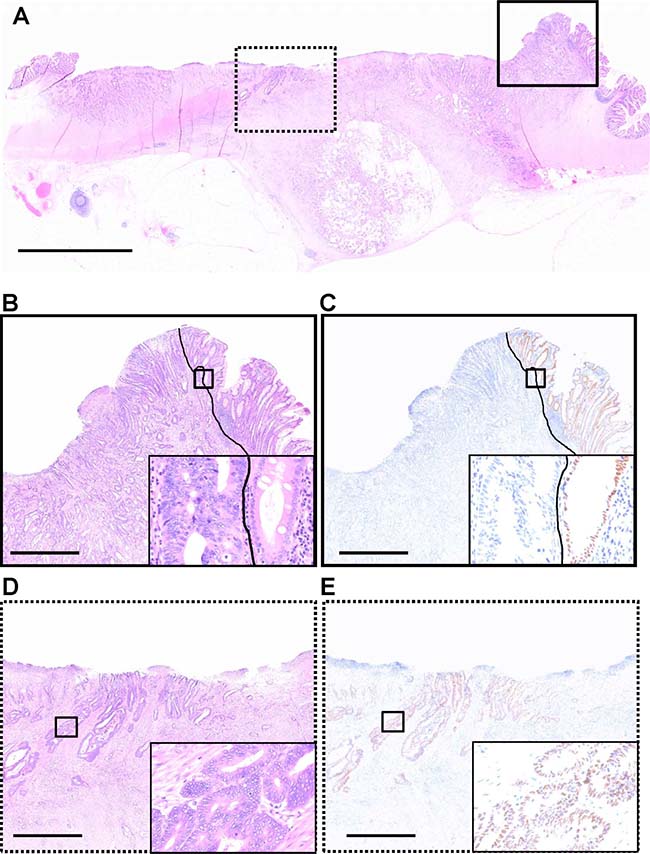 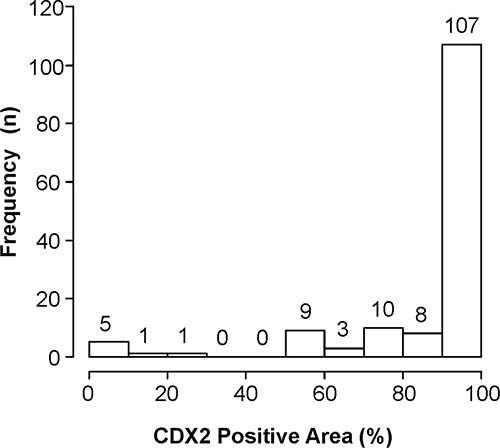 Figure 2: Histogram depicting the ratios of CDX2-positive cells to all cancer cells in whole sections of primary colorectal cancers. In the study cohort, more than 32 cases (22.2%) showed heterogeneous CDX2 expression.

Table 3: Concordance of CDX2 expression between primary colorectal cancers and corresponding liver metastases in patients with and without chemotherapy

As a secondary analysis, we investigated CDX1 expression status in non-cancerous and cancerous tissues using 134 primary CRCs because CDX1 has high structural homology to CDX2 and plays complementary roles in the adult intestine [24], and its expression has been reported to inhibit colon cancer cell proliferation in vitro [25, 26]. In the primary sites, the nuclear expression of CDX1 was observed in the non-cancerous epithelium. In contrast to the non-cancerous epithelium, the CDX1 expression of cancerous tissue was usually very low or absent (Supplementary Figure 2). In the same manner as the CDX2 investigation, we set a cutoff point of 50% tumor cells to assess whether a tumor is positive or negative for CDX1 protein expression. Among the 134 primary CRCs, 7 (5.2%) were CDX1-positive CRCs and 127 (94.8%) were CDX1-negative CRCs.

The present study demonstrated the heterogeneity of CDX2 expression in whole CRC sections. Additionally, the results revealed the high concordance rate of CDX2 expression between primary CRCs and corresponding liver metastases, which was not affected by chemotherapy. To the best of our knowledge, this is the first report to investigate potential changes in CDX2 expression during CRC development and chemotherapy.

Our study has several limitations due mainly to its retrospective nature. First, we selected the patients who underwent primary CRC resection and liver metastasectomy in the current study. However, we believe that selection bias was negligible because the comparisons included primary CRC and metastatic samples that were obtained from the same patients, and the prevalence CDX2 expression loss of 4.9% was similar to those reported previously [16, 19]. Second, long-term storage of samples (3–10 years) might have affected CDX2 immunoreactivity. However, the year of diagnosis did not have a significant impact on the CDX2 expression (data not shown), suggesting that the storage period did not substantially affect CDX2 immunoreactivity. Third, the number of CDX2-negative CRC patients was relatively small, and information about CDX2 expression alterations in the CDX2-negative CRCs was limited. This is because CDX2-negative CRCs are rare, and only Japanese patients at a single cancer hospital were included in the present study. However, in this study, on an examination of cross-sections, primary CRC revealed heterogenous CDX2 expression, and 21.9% (30/137) of CDX2-positive primary CRCs also had CDX2-negative cancer cells in the tumor (Figure 2). Thus, the high concordance rate of the CDX2 expression status was achieved through expression consistency in both CDX2-positive and CDX2-negative components of the primary tumor. Although our primary hypothesis regarding the association between CRCs and CDX2 expression status was whether the alterations from CDX2-positive to CDX2-negative during tumor progression or chemotherapy were negligible, the investigation of the opposite situation also yields valuable information. In survival analysis, the number of patients with CDX2-negative CRCs is small, and the results might not be sufficiently powered to detect a difference. Further studies with a large sample size are necessary to elucidate the impact of chemotherapy or tumor progression in CDX2-negative CRCs and confirm our findings.

In this retrospective study, CRC surgical samples were obtained from 144 consecutive patients who underwent colorectal resection with extended lymph node dissection (D2 or D3) and liver resection for CRC at the Cancer Institute Hospital in Tokyo, Japan, between 2006 and 2014. Only patients with resected tumor samples available from both primary CRCs and corresponding liver metastases that were suitable for immunohistochemical analysis were included. In total, 288 samples consisting of primary CRCs and corresponding liver metastases from 144 patients were included. Clinical data and histological features included age, sex, tumor location, number of liver metastases, clinical-stage, history of chemotherapy, and tumor grade. Histological findings were determined according to the fourth edition of the World Health Organization criteria [34]. Tumor stage was determined according to the seventh edition of the tumor-node-metastasis staging manual of the American Joint Committee on Cancer [35]. Patients who received chemotherapy within six months before surgical resection were defined as those with a history of chemotherapy. Patients who did not give written informed consent were excluded from this study. Whole CRC sections were reviewed and confirmed by two of the investigators (Y.S. and K.I.). The study was approved by the committee for ethics at the Cancer Institute Hospital (No. 2016–1087).

All statistical analyses were conducted using R version 3.2.2 (R Foundation for Statistical Computing, Vienna, Austria). Fisher’s exact test was used to analyze the association between primary CRCs and corresponding liver metastases based on the CDX2 expression status and to evaluate differences in relative frequencies of clinicopathological parameters between the CDX2-positive and -negative groups. Cohen’s kappa index was used to assess the concordance of CDX2 expression status determined by the two investigators [36]. Differences between mean values of two groups were evaluated by the Mann–Whitney U test. Two-tailed P values of 0.05 or less were considered to be statistically significant. For the survival analysis between the patient subgroups, we used Kaplan–Meier curve and log-rank test. RFS and OS were calculated from the date of liver metastasectomy to the date of the first recurrence at any site or death.

We thank Mr. Motoyoshi Iwakoshi and Ms. Tomoyo Kakita for their kind assistance in sample preparation and Drs. Yutaka Takazawa, Hiroshi Kawachi, Manabu Takamatsu, and Maki Kobayashi for their constructive comments on the study.

This work was supported by Japan Society for the Promotion of Science KAKENHI Grant Number JP16K21590 and Grants-in-Aid from the Foundation for the Promotion of Cancer Research in Japan. None of the funding sources had a role in the study design, data collection/analysis, interpretation of data, or writing of the manuscript.