In patients receiving care in palliative care units (PCUs), information about prognosis is important to help patients set priorities and expectations for care and to assist clinicians in decision-making. Prognostic scores for patients in palliative care programs have been built and validated [1]. Specifically, the Palliative Performance Scale (PPS) score [2, 3] is a modification of the Karnofsky Performance Scale, in which ambulation, activity, self-care, intake, and level of consciousness are considered. The Palliative Prognostic Index (PPI) is the sum of the PPS and other clinical variables (oral intake, edema, resting dyspnea, and delirium) that are independently predictive of survival (4). The PPI can acceptably predict whether or not a patient will survive >3 or >6 weeks [4]. PPI has been tested by other authors [5–8].

Herein we assessed whether the survival of patients is not only dependent on the PPI score calculated at the time of hospital admission, but also on the presence or absence of acute concomitant diseases. Modifications to the prognostic ability of the PPI after hospital discharge of patients when symptoms have been controlled and acute concomitant diseases have been resolved were also assessed.

Table 1: Characteristics of the patients analyzed according to the presence or absence of acute concomitant diseases

Mortality of patients with or without concomitant diseases

Table 2: Factors associated to mortality during hospitalization of patients

Survival of patients with or without concomitant diseases from hospital admission

Table 3: Survival at 3 and 6 weeks of studied patients 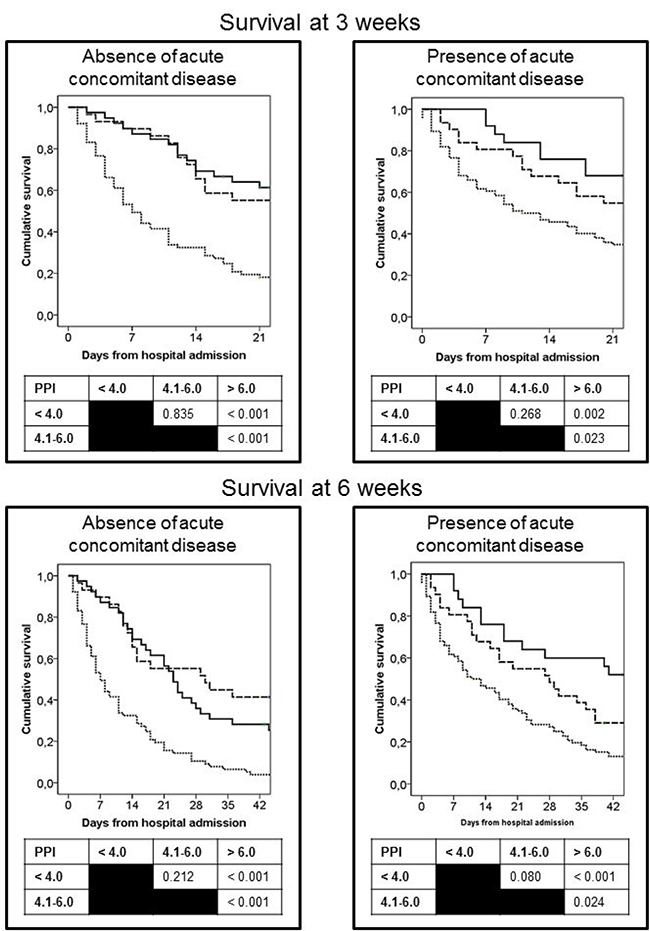 Figure 1: Curves of survival at 3 and 6 weeks of patients from hospital admission as a function of the PPI score. Patients were grouped according the presence or absence of acute concomitant diseases. PPI score: <4 points (continuous line), 4.1–6.0 points (dashed line), >6.1 points (dotted line).

Depending on the presence or absence of acute concomitant diseases and on the PPI calculated at the time of hospital admission, PPV, NPV, S, and E for survival < 3 weeks and < 6 weeks are shown in Figure 2A–2D. 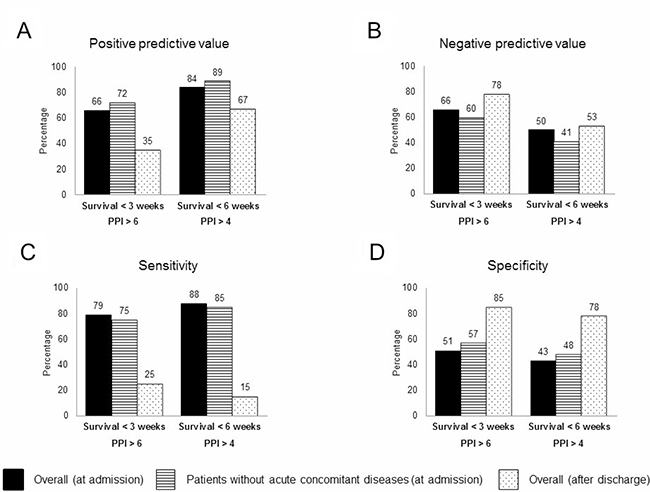 The European Association for Palliative Care recommends the use of clinical tools, such as predictive scores to prognosticate life expectancy in advanced cancer patients [1]. Although there are several prognostic scores in Palliative Care [10], the Palliative Prognostic (PaP) Score, the Delirium-PaP score, and the PPI are the most frequently used [11, 12]. The accuracy at 21 days of follow-up of PaP score is 70–90%, 68–91% for Delirium-PaP score and 65–88% for PPI [11, 12]. The PaP and Delirium-PaP scores include total white blood count and lymphocyte percentage because these values can be modified by the presence of some concomitant diseases, such as infections, thus the PaP and Delirium-PaP scores were not considered suitable for the present study.

The PPI was built and internally validated in 1999 [4, 13]. The predictive value of the PPI varies among different studies [5, 6]. A possible reason is that the PPI is usually assessed only once, generally during the consultation with the palliative care specialist. When used only at the initial assessment, the PPI might be inappropriate as a prognostic tool because the PPI does not reflect the clinical course [14]. Prognosis may change based on the treatment response, development of acute oncologic complications (e.g., hypercalcemia and spinal cord compression), or competing co-morbidities (e.g., heart failure) [15]. Consequently, to be able to understand the results of the different studies, the time at which PPI was calculated is needed; however, only some studies [16] include this information.

We consider that the present study has contributed to assessment of the prognostic value of the PPI at two specific times (hospital admission [when symptoms are not controlled or a concomitant disease is present] and hospital discharge [symptoms are controlled and the patient is stable]).

The causes of hospital admission can be classified into two groups (not directly related to the cancer [concurrent diseases] and related to the cancer [either refractory symptoms, disease progression, or familiar or personal exhaustion]). This classification has been useful in the present work because it has been demonstrated that concurrent diseases modify the predictive ability of the PPI. Thus, analyzing survival < 3 weeks, the positive predictive value of the PPI ≥ 6.1 points is 66% if we analyze the overall cohort, but increases to 72% when only those patients with symptoms related with progression of the cancer are considered. Multivariate analyses demonstrated that in addition to the ability of the PPI to predict the prognosis, the presence of concurrent diseases impacts the probability of death in cancer patients. Several reasons could be accepted to explain these findings. First, concurrent diseases can modify the value of variables included in the PPI; thus, dyspnea or edema can be the consequence of cardiac failure or pneumonia; dyspnea can appear as a consequence of pulmonary thromboembolism [17], or delirium can occur because of the vasodilation and cerebral hypoxia in sepsis [9]. Second, the evolution of these patients with a treatable disease, even in palliative care, is better than the evolution of those who are attended by refractory symptoms or progression of the disease. Effectively, analyzing the mortality during hospitalization, it was observed that 92 of 165 patients (45%) with concurrent diseases died, whereas in those admitted for cancer-related causes the mortality was 72 % (113 of 157 admitted patients).

The issue of in-hospital mortality associated with palliative care has been previously addressed. Hui et al. [18], in a study involving 352 patients admitted to acute palliative care units, observed that the presence of acute symptomatic complications was associated with a higher risk of mortality; however, this study did not differentiate among those acute complications (bowel obstruction or perforation, cachexia, hemoptysis, hypercalcemia, or tamponade) probably related to cancer progression and those not related to cancer progression (such as heart failure, ischemic stroke, or pneumonia). This is the first study to analyze the influence of real concomitant diseases, not directly related with the neoplasia, on the prognostication provided by predictive scores. Findings of our work could explain the variability of PPI among different studies. Thus, for a survival < 3 weeks, the predictive positive value of a PPI > 6.1 ranges from 57 to 92% [4, 5, 7, 11, 12, 20–22].

After discharge, there was no significant difference in survival based on the PPI score. Moreover, the positive predictive value of the PPI calculated at hospital discharge decreased notably compared with the positive predictive value of the PPI at the time of hospital admission. This finding could be attributed to the poor prognosis related with a high symptom burden at the time of hospital admission [19]. In fact, the effective management of these symptoms by a palliative care team has been associated with improved survival in a controlled trial [20]. Other studies analyzing the survival of oncologic patients specifically in the home care setting have also detected a low accuracy for the PPI [21, 22].

In conclusion, the PPI, as a prognostic score in cancer palliative care, is dependent upon the moment at which the PPI has been calculated. Although the PPI retains a good predictive positive value at the time of hospital admission, it is mandatory to consider the possibility of acute concomitant diseases not related with the neoplasia, the treatment of which could modify symptoms and survival.

This observational, prospective, cohort study was conducted on patients consecutively admitted to the PCU of University Hospital Puerta del Mar (Cádiz, Spain) from December 2013 to December 2015. During the study period, all patients > 18 years of age referred to the PCU were considered eligible, and all were cancer cases. No patient was receiving palliative radiotherapy and/or chemotherapy.

The PCU includes a 14-bed inpatient unit in which this work was performed. Causes of admission of individuals under palliative care in this inpatient unit are as follows: 1) refractory symptoms/disease progression; 2) caregiver or patient exhaustion (physical or emotional); and 3) acute concomitant diseases.

The following data were collected at the time of admission by the physician: age; sex; diagnoses of malignancy type; presence or absence of metastasis; and causes of admission and diagnosis of acute concomitant diseases, if any, and variables needed to calculate the PPI score (oral intake, presence or absence of edema, dyspnea at rest, delirium, and PPS). If patients were receiving total parenteral nutrition or had an enteral feeding tube, they were included in a “normal” oral intake category. Delirium was diagnosed at the time of admission using the criteria of the Diagnostic and Statistical Manual of Mental Disorders (Fifth Edition). For patients who had difficulty with verbal communication, a nurse specialist assessed their status using a proxy or caregiver response.

After treatment of hospitalized patients, all surviving individuals discharged were followed until death or study closure time (15 February 2016) by the mobile palliative care team.

Qualitative variable results are shown as a number (percentage) and quantitative variables as a mean (± standard deviation) or as a median (interquartile range) depending on whether or not the data was normally distributed, as assessed by the Kolmogorov´ test.

Approval for the study was granted by the Ethics and Medical Research Committee at the University Hospital Puerta del Mar (Cadiz, Spain). All participants provided written informed consent.

The datasets during and/or analysed during the current study are available from the corresponding author on reasonable request.

The authors declare they have no competing interest.