We recently reported that the Smac mimetic BV6 and glucocorticoids, e.g. Dexamethasone (Dexa), synergize to induce cell death in acute lymphoblastic leukemia (ALL) in vitro and in vivo. Here, we discover that this synergism involves Dexa-stimulated downregulation of cellular FLICE-like inhibitory protein (cFLIP) in ALL cells. Dexa rapidly decreases cFLIPL protein levels, which is further enhanced by addition of BV6. While attenuating the activation of non-canonical nuclear factor-kappaB (NF-κB) signaling by BV6, Dexa suppresses cFLIPL protein but not mRNA levels pointing to a transcription-independent downregulation of cFLIPL by Dexa. Analysis of protein degradation pathways indicates that Dexa causes cFLIPL depletion independently of proteasomal, lysosomal or caspase pathways, as inhibitors of the proteasome, lysosomal enzymes or caspases all failed to protect from Dexa-mediated loss of cFLIPL protein. Also, Dexa alone or in combination with BV6 does not affect overall activity of the proteasome. Importantly, overexpression of cFLIPL to an extent that is no longer subject to Dexa-imposed downregulation rescues Dexa/BV6-mediated cell death. Vice versa, knockdown of cFLIP increases BV6-mediated cell death, thus mimicking the effect of Dexa. Altogether, these data demonstrate that Dexa-mediated downregulation of cFLIPL protein promotes Dexa/BV6-mediated cell death, thereby providing novel insights into the synergistic antitumor activity of this combination treatment.

Apoptosis is one of the best characterized forms of programmed cell death and a crucial process in physiological and pathophysiological conditions [1]. Its execution is tightly regulated by several proteins, like Inhibitor of Apoptosis (IAP) proteins [2] or cFLIP [3]. Evasion of programmed cell death is a hallmark of cancer and accomplished, for example, by aberrant expression of antiapoptotic proteins.

One major cell death regulator is cFLIP. High cFLIP expression is correlated with a poor prognosis in several tumor entities [4–6] and its downregulation is part of effective drug-mediated cell death [7]. There are two main isoforms of cFLIP expressed in human cells which control cell death in a distinct manner: The long isoform cFLIPL, a 55 kDa protein, and the short isoform cFLIPS, a 25 kDa protein [3]. cFLIPL is a caspase-8/-10 homolog with two death effector domains (DEDs), but with an inactive caspase domain. Its influence on cell death regulation is being controversially discussed, as it is reported to exert pro- or antiapoptotic effects, depending on the context. Lower levels of cFLIPL are associated with a proapoptotic function, as highly active heterodimers are formed [8]. In higher concentrations, cFLIPL prevents caspase-8 activation in the death-inducing signaling complex (DISC) [9], which is formed upon death receptor-mediated cell death and caspase-8 activation in the ripoptosome, a signaling platform formed upon IAP depletion [10, 11]. cFLIPS consists only of two DEDs and directly inhibits caspase-8 activation at the DISC [9] and the ripoptosome [10, 11] and thereby apoptosis.

Other cell death-regulating proteins are IAP proteins which are known to be prognostic factors in different tumor entities [12]. Their inhibition as therapeutic approach has been intensively studied and IAP antagonists including Smac mimetics have been developed. Smac mimetics, e.g. BV6, induce autoubiquitination and proteasomal degradation of IAP proteins and have been shown to promote cell death induced by different stimuli [13].

New treatment strategies are required for ALL, as the prognosis for relapsed patients is still poor [14]. We previously discovered that the Smac mimetic BV6 sensitizes ALL cells to glucocorticoids, such as Dexa, which are part of the standard therapy of ALL patients, by promoting the formation of the ripoptosome complex and by exerting antileukemic activity in a patient-derived xenograft model of ALL in vivo [15]. The assembly of the ripoptosome is regulated, amongst others, by the two major isoforms of cFLIP, i.e. cFLIPL and cFLIPS [10, 11]. Therefore, we studied the role of cFLIP in regulating Dexa/BV6-mediated cell death to gain new insights into the molecular mechanisms underlying the synergism of Dexa and BV6.

Initially, we determined protein expression of the two major isoforms of cFLIP (i.e. cFLIPL and cFLIPS) in ALL cell lines. Since all analyzed ALL cell lines predominately expressed cFLIPL rather than cFLIPS protein (Supplementary Figure 1), we focused our analysis in ALL on cFLIPL. We then asked whether Dexa as single agent or in combination with BV6 affects cFLIPL levels. Interestingly, treatment with Dexa alone or together with BV6 downregulated cFLIPL protein levels already after a few hours (Figure 1A). To examine whether the loss of cFLIPL protein is due to changes in mRNA expression, we performed qRT-PCR analysis. Dexa treatment increased rather than suppressed cFLIPL mRNA levels (Figure 1B), indicating that the observed loss of cFLIPL protein by Dexa or Dexa/BV6 treatment is independent of mRNA expression. These data indicate a Dexa-mediated downregulation of cFLIPL protein independent of mRNA expression. 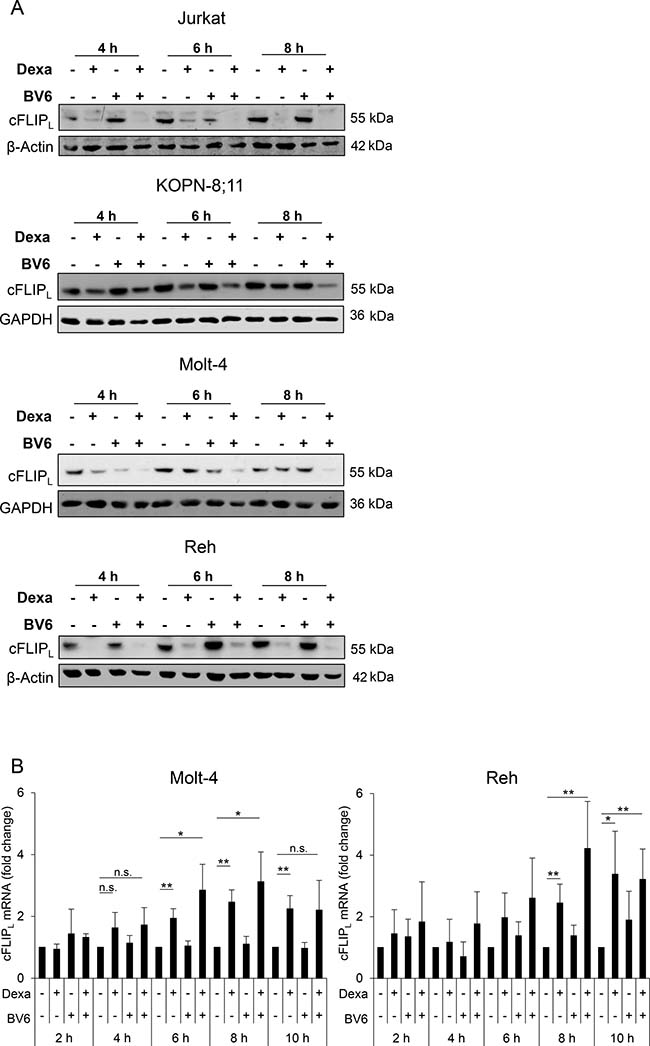 Since Smac mimetics have been described to deplete IAP proteins [16, 17], we determined expression levels of cellular IAP (cIAP)1, cIAP2 and x-linked IAP (XIAP) upon treatment with Dexa and BV6. As expected, treatment with either BV6 alone or in combination with Dexa caused a loss of cIAP1 and cIAP2 in all four cell lines and XIAP expression slightly decreased by Dexa/BV6 cotreatment (Figure 2A). In KOPN-8;11 cells, we did not detect cIAP2 protein (Figure 2A).

As loss of cIAP proteins can lead to activation of the non-canonical NF-κB pathway [16, 17], we next assessed expression of NF-κB-inducing kinase (NIK) and p100/p52 as key components of non-canonical NF-κB signaling. Treatment with BV6 caused accumulation of NIK protein (Figure 2B), in line with the observed BV6-imposed depletion of cIAP proteins (Figure 2A), which serve as E3 ligases of NIK [16]. In addition, BV6 increased NIK mRNA expression (Figure 2C). Interestingly, addition of Dexa abolished the BV6-mediated accumulation of NIK protein (Jurkat, KOPN-8;11, Reh) or reduced it (Molt-4) (Figure 2B). Consistently, addition of Dexa slightly diminished the BV6-mediated processing of the NF-κB precursor p100 to p52 in all four cell lines (Figure 2B). Altogether these data indicate that Dexa impedes the BV6-triggered activation of NF-κB.

Since our data point to a transcription-independent regulation of cFLIPL, we investigated whether Dexa-stimulated downregulation of cFLIPL is due to changes in cellular protein degradation pathways. cFLIPL is described as short-lived protein, which is primarily regulated by the ubiquitin-proteasomal pathway [18]. To determine the half-life of cFLIPL in ALL cell lines, we performed cycloheximide (CHX) chase assays to assess cFLIPL levels upon inhibition of protein synthesis by CHX. CHX treatment caused a rapid decrease in cFLIPL protein (Figure 3A). To analyze the role of the proteasomal pathway, we blocked the proteasome by the specific inhibitor Bortezomib. The addition of Bortezomib delayed loss of cFLIPL protein upon protein synthesis inhibition, in particular in Reh cells, but did not completely rescue it, whereas loss of Noxa protein, a known target of the proteasome, was partially restored in both cell lines (Figure 3A), indicating that cFLIPL is not strictly regulated by the proteasome in the analyzed cell lines. To explore whether loss of cFLIPL protein upon Dexa treatment is mediated via the proteasome, we added Bortezomib to Dexa-treated cells. Interestingly, Bortezomib failed to rescue Dexa-mediated loss of cFLIPL protein (Figure 3B). To assess whether Dexa directly impairs proteasome activity, we performed a proteasome activity assay. Dexa alone or in combination with BV6 did not alter 20S proteasome activity (Figure 3C). By comparison, Dexa treatment had little effects on other short-lived proteins at early time points, such as Noxa or Mcl-1 (Supplementary Figure 2).

To investigate whether cFLIPL protein is degraded upon Dexa treatment via the lysosomal pathway, we blocked lysosomal enzymes by different pharmacological inhibitors. All of them (alone or in combination) failed to prevent loss of cFLIPL protein after Dexa treatment (Figure 3D). Since cFLIPL is a known target of caspase-8, we analyzed whether caspase-mediated cleavage of cFLIPL is responsible for its loss upon Dexa treatment. But the addition of N-benzyloxycarbonyl-Val-Ala-Asp-(OMe)-fluoromethylketone (zVAD.fmk), a pan-caspase inhibitor, did not prevent Dexa-mediated downregulation of cFLIPL (Figure 3E). This set of experiments indicates that Dexa-mediated loss of cFLIPL protein in ALL cell lines is not primarily mediated via the proteasome, lysosomal enzymes or caspases. 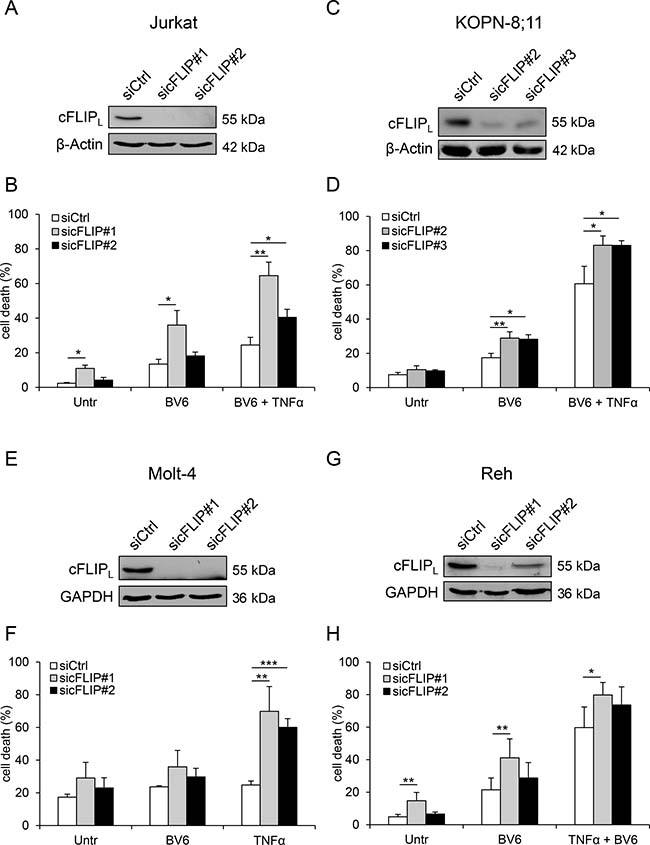 cFLIP is a well-described negative regulator of cell death in many tumor entities and treatment strategies. cFLIP has been shown to protect from Smac mimetic-induced cell death [20, 21] and silencing of cFLIP was found to sensitize different tumor cell lines to Smac mimetics [21, 22]. Also, there are several reports showing that cFLIP can protect cancer cells from TRAIL-, CD95- or chemotherapy-induced cell death [23–26].

Furthermore, our study provides new insights into the molecular mechanisms that are responsible for Dexa-imposed downregulation of cFLIP protein. cFLIP expression is tightly regulated by various transcriptional and post-transcriptional mechanisms. While cFLIP is known to be regulated by different transcription factors including NF-κB [27, 28], our data point to a transcription-independent regulation of cFLIP by Dexa, as Dexa suppressed cFLIPL protein but not mRNA levels. Nevertheless, Dexa attenuated BV6-stimulated non-canonical NF-κB activation in ALL cell lines, which is consistent with other reports showing that glucocorticoids such as Dexa can block NF-κB [29–31].

cFLIP is known as a short-lived protein and its turnover has been shown to determine sensitivity to cell death, e.g. to death receptor signals [32]. Several E3 ubiquitin ligases, for example Itch [33, 34], have been identified that polyubiquitinate cFLIP to induce its proteasome-mediated proteolysis, and proteasome inhibitors have been described to rescue the degradation of cFLIP protein [35, 36]. In addition, increased proteasome activity is associated with downregulation of cFLIP protein [37]. However, our findings suggest that Dexa-induced loss of cFLIPL protein is not primarily due to increased proteasomal degradation, since i) addition of the proteasome inhibitor Bortezomib failed to fully protect from Dexa-induced loss of cFLIP protein and since ii) treatment with Dexa alone or in combination with BV6 did not alter 20S proteasomal activity.

Besides proteasome-mediated proteolysis, tumor necrosis factor (TNF) receptor-associated factor (TRAF)7, another E3 ubiquitin ligase, has been described to polyubiquitinate cFLIP and to induce its lysosomal degradation [38]. However, our findings suggest a lysosome-independent downregulation of cFLIPL, as inhibition of several lysosomal enzymes, either alone or in combination, failed to rescue Dexa-stimulated cFLIPL degradation. It is also unlikely that caspase-8-triggered cleavage of cFLIPL is responsible for its downregulation by Dexa, since the pan-caspase inhibitor zVAD.fmk did not prevent Dexa-mediated loss of cFLIPL.

As transcriptional or post-translational regulation, e.g. by caspases or the proteasome, are not primarily responsible for downregulation of cFLIPL, it might be that translational processes are affected by Dexa. While in ALL cells glucocorticoids have been shown to repress genes involved in RNA, protein and nucleotide synthesis [39], which is in line with studies on other tumor entities [40] or tissues [41, 42], Dexa has recently been reported to not alter mRNA translation in ALL cell lines [43]. While the rapid kinetic of Dexa-mediated loss of cFLIPL protein similar to inhibition of protein synthesis by CHX is consistent with a block of translation or ribosomal proteins upon Dexa treatment, further studies are required to fully understand the mechanisms underlying Dexa-stimulated decrease of cFLIPL.

By showing that Dexa-mediated downregulation of cFLIPL contributes to its sensitization to BV6-induced cell death, our study provides new insights into the molecular mechanisms of the cooperative induction of cell death by Dexa/BV6. As glucocorticoids are part of treatment regimens for ALL patients, our findings showing that Dexa and BV6 cooperate to induce cell death provide new concepts to enhance glucocorticoid sensitivity.

This work has been partially supported by grants from the BMBF (to S.F.).