Wnt signaling occurs in β-catenin-dependent pathways, through β-catenin regulates the expression of many genes, and in the β-catenin-independent planar cell polarity and Wnt/Ca2+ pathways [1, 2]. β-catenin-dependent pathways are involved in some cancers, for example, familial polyposis, in which the adenomatous polyposis coli mutation causes the accumulation of β-catenin in the nucleus, resulting in colorectal cancer [2, 3]. In β-catenin-independent pathways, Wnt5a is a representative activating ligand involved in cell motility and cell polarity through downstream signaling (e.g., JNK phosphorylation) [4]. Wnt5a expression correlates significantly with malignancy and stage of progression in malignant melanoma [5, 6], gastric cancer [7–9], prostate cancer [10], lung cancer [11], and pancreatic cancer [12]. In contrast, Wnt5a is a tumor suppressor in colorectal cancer [13], thyroid cancer [14], liver cancer [15], and malignant lymphoma [16]. Thus, the effect of Wnt5a expression differs between organs.

Whether Wnt5a expression in breast cancer correlates with pathological factors such as lymph node metastasis and grade is unknown. While a significant correlation between the immunohistochemical disappearance of Wnt5a expression and poor prognosis [17, 18] has been reported, these studies do not distinguish between breast cancers subtypes. Breast cancer is classified into four subtypes based on the expression of the estrogen receptor (ER) and human epidermal growth factor receptor 2 (HER2) [19, 20]. Because ER-positive and -negative breast cancers derive from different tissues (ductal epithelium and basal cells, respectively), the two subtypes are biologically distinct. ER-positive breast cancers progress slowly, whereas those that are ER-negative are highly malignant and have a poor prognosis. In previous studies, the inclusion of all subtypes, with their remarkably distinct prognoses, likely interfered with the accurate determination of the role of Wnt5a in breast cancer. 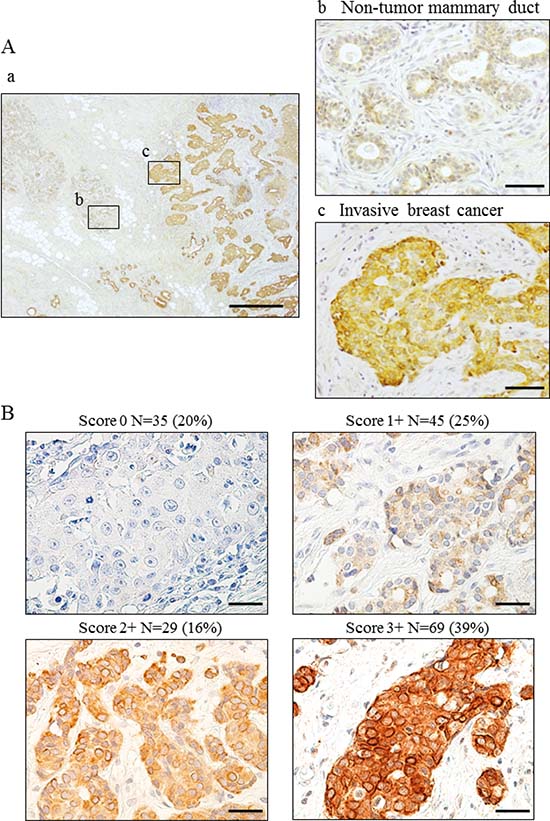 Table 1: Relation of Wnt5a expression with ER, PgR and HER-2 in breast cancer 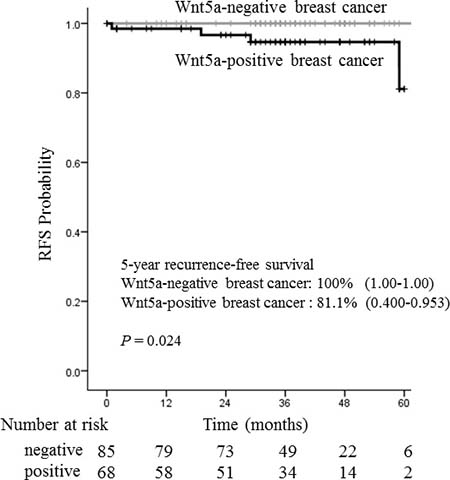 We prepared MCF-7, an ER-positive breast cancer cell line expressing no Wnt5a, and forced it to express Wnt5a constitutively (MCF-7/Wnt5a cells). These cells showed no change in the levels of proteins involved in breast cancer–related signaling pathways or β-catenin-dependent pathways, such as ER, β-catenin, and cyclin D1 (Figure 3A). There was no significant difference in the proliferative capacity between MCF-7/Wnt5a and control MCF-7 cells (Figure 3B). As Wnt5a is reported to associate with cell migration, we conducted cell migration assays to determine the migratory capacity of Wnt5a-positive breast cancer cells. We also tested Wnt5a-silenced MCF-7/Wnt5a cells (MCF-7/Wnt5a + Wnt5a-siRNA cells), bringing the total number of cell types investigated to three. The migratory capacity of MCF-7/Wnt5a cells increased significantly 12 h later, whereas knockdown of Wnt5a resulted in a lower increase in migratory capacity (Figure 3C, 3D). 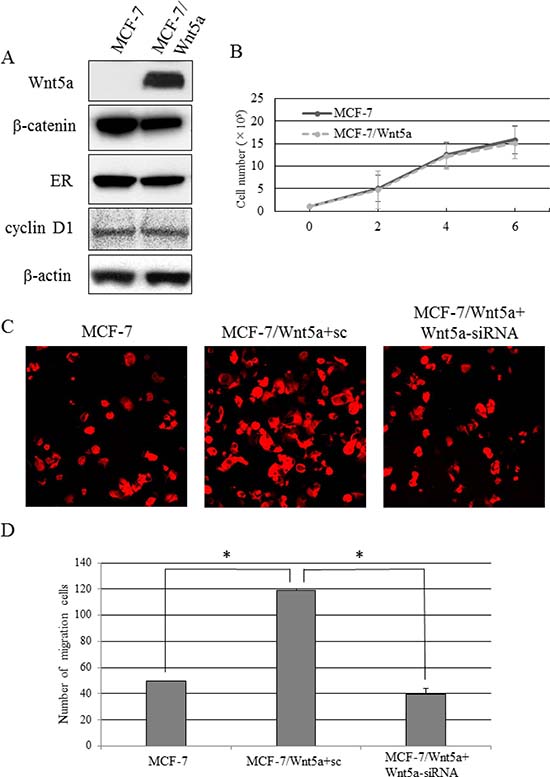 We investigated the endogenous Wnt5a expression in several ER-positive breast cancer cell lines. A strong endogenous Wnt5a expression was observed in MDA-MB-175-VII cells (Figure 4A, Supplementary Figure 1). The knockdown of Wnt5a in MDA-MB-175-VII cells significantly decreased migratory capacity, whereas knockdown of Wnt5a in MDA-MB-361 cells did not decrease migratory capacity (Figure 4B). 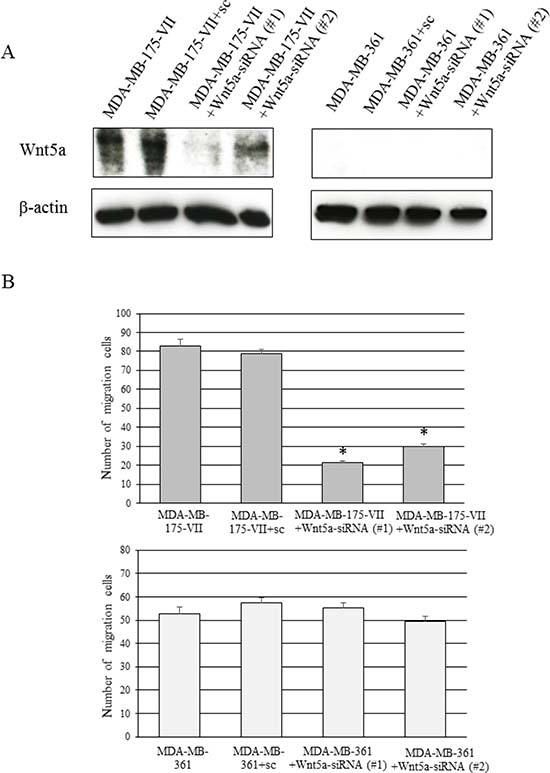 To investigate the mechanism by which Wnt5a expression leads to increased migratory activity, we conducted DNA microarray analysis of MCF-7/Wnt5a cells and control cells. We identified several genes upregulated (Table 3) and several downregulated (Supplementary Table 3) by Wnt5a. One of the upregulated genes, ALCAM, is a member of the immunoglobulin superfamily that is localized in the plasma membrane. ALCAM is involved in apoptosis, angiogenesis, migration, and invasion [26–28]. We focused on ALCAM and investigated its protein expression by Western blotting, observing a marked increase of ALCAM in MCF-7/Wnt5a cells and decrease of ALCAM in MCF-7/Wnt5a and MDA-MB-175-VII cells by the knockdown of Wnt5a (Supplementary Figure 2, Figure 5A). 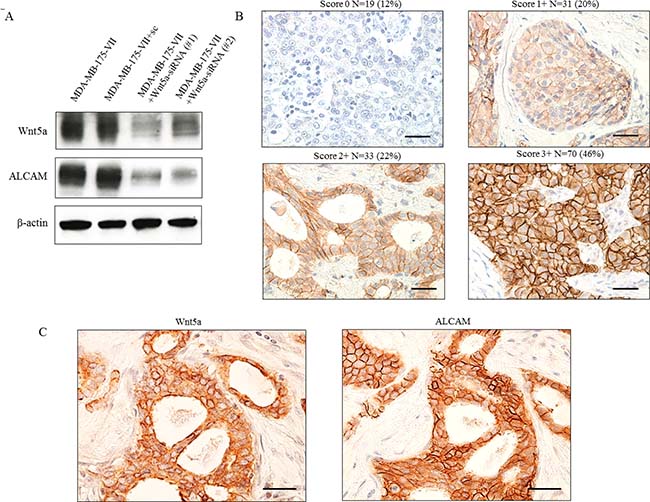 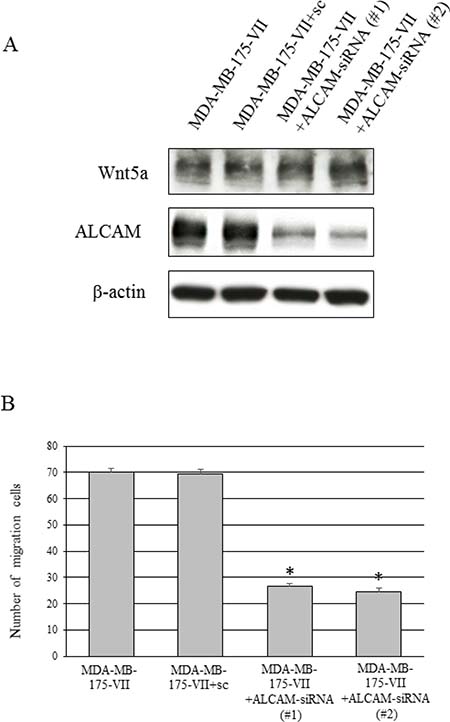 Figure 6: Knockdown of ALCAM decreases the Wnt5a-induced increase in migratory capacity. (A) Wnt5a and ALCAM expression of MDA-MB-175-VII cells transfected with ALCAM-siRNAs (ALCAM-siRNA #1 and #2) and sc. (B) The migratory capacity of MDA-MB-175-VII cells transfected with ALCAM-siRNAs and sc. Data are presented as the mean ± SE of three migration assays. Data were evaluated using the Mann–Whitney U-test.

We examined nearly 200 specimens using an antibody already confirmed accurate in immunohistochemical analysis of Wnt5a-positive gastric cancers [7]. We observed a high correlation between Wnt5a and ER expression in breast cancers. In addition, our results indicate that Wnt5a-positivity strongly correlated with the presence of lymph node metastasis, lymphatic invasion, vessel invasion, and nuclear grade in ER-positive breast cancer. We also observed that among ER-positive breast cancers, those expressing Wnt5a were more malignant and had a poorer prognosis than those that did not express Wnt5a.

Wnt5a expression has been shown to correlate with tumor progression in a variety of cancers. However, the function of Wnt5a has been reported as both a tumor suppressor and a tumor promotor in breast cancer. The loss of Wnt5a was found to be an indicator of poor prognosis in a study of whole breast cancers, including different subtypes [17]. However, accurate assessment of Wnt5a function in different subtypes is difficult because mutations in the signaling molecules differ between different subtypes. Therefore, it is important to determine which subtypes express Wnt5a. The majority of the previous reports on Wnt5a-positive breast cancer classified these cancers based solely on the presence or absence of Wnt5a expression, without regard to subtype. In addition, the number of cases studied in these reports was small, and there was not a suitable antibody available for immunohistochemical analysis of tissues.

Patients with invasive breast cancer treated surgically between January 2011 and February 2014 at Hiroshima University Hospital in Japan were sequentially enrolled in this study. Patients treated with neoadjuvant chemotherapy were excluded. This study was approved by the institutional review board of Hiroshima University Hospital (No. 926), and all participants provided written informed consent for the use of their tissue specimens. Each participant’s medical information was obtained from medical records.

Immunohistochemistry was performed as previously described [22]. Antigen retrieval was made using proteinase treatment (Proteinase K S3004; Dako, Carpinteria, California, USA) for 2 min and 30 s in room air. The sections were reacted with the polyclonal anti-Wnt5a antibody, a kind gift from Prof. Akira Kikuchi (Department of Molecular Biology and Medicine, Osaka University, Suita, Japan) at 4° C overnight. Activated leukocyte cell adhesion molecule (ALCAM) was stained with anti-ALCAM antibody (clone MOG/07; Leica Biosystems, Wetzlar, Hesse, Germany). Antigen retrieval was made using heat-treatment for 20 min at 98° C in citrate buffer (pH 6.0). Wnt5a and ALCAM expression were scored as 0, 1+, 2+, or 3+, taking into consideration staining proportion and intensity. The Wnt5a and ALCAM scores were assessed as follows: 0, no staining or staining in ≤10% of invasive tumor cells; 1+, weak staining in >10% of invasive tumor cells; 2+, moderate staining in >10% of invasive tumor cells or strong staining in >10% and ≤30% of invasive tumor cells; 3+, strong staining in >30% of invasive tumor cells. A score of 3+ was defined as positive for both Wnt5a and ALCAM. The scoring was independently conducted by two investigators who had no knowledge of the patients’ clinical data. An automatic staining machine was used for immunohistochemical staining of the following biomarkers: ER, PgR (SP-1, monoclonal antibody; Ventana Medical Systems, Tucson, Arizona, USA), HER2 (polyclonal antibody; Dako), and Ki-67 (30-9, monoclonal antibody; Ventana Medical Systems). A proportion of nuclear staining of ER and PgR ≥1% was considered positive expression. HER2 expression was evaluated accordingly as previously described [29].

The control MCF-7 and MCF-7/Wnt5a cells were seeded at densities of 1 × 105/mL as previously described [8]. Cells were enumerated on the incubated days.

For the Oligo DNA microarray analysis, cells were washed with phosphate-buffered saline once and collected with Buffer RLT (Qiagen, Hilden, North Rhine-Westphalia, Germany). Total RNA was extracted from cells using the RNeasy mini kit (Qiagen). The 3D-Gene Human Oligo chip 25 k (Toray Industries, Tokyo, Japan) was used. For efficient hybridization, this microarray has 3-dimensions constructed with a well as the space between the probes and cylinder-stems, with 70-mer oligonucleotide probes on the top. Total RNA was labeled with Cy5 using the Amino Allyl MessageAMP II aRNA Amplification Kit (Applied Biosystems, Foster City, California, USA). The Cy5-labeled aRNA pools were placed in hybridization buffer and allowed to hybridize for 16 h using the supplier’s protocols (www.3d-gene.com). The hybridization signals were obtained using the 3D-Gene Scanner (Toray Industries) and processed by 3D-Gene Extraction (Toray Industries). Detected signals for each gene were normalized using the global normalization method, with the median of the detected signal intensity adjusted to 25.

The correlation between immunohistochemical determination of Wnt5a expression and clinicopathologic factors in tumor tissues was analyzed using the Chi-square test. The correlation between Wnt5a and ALCAM expression was analyzed by kappa coefficient. The Mann–Whitney U-test was used to compare cell migration. P values < 0.05 were considered statistically significant. All calculations were performed using SPSS version 20.