Ovarian metastasis is estimated to account for 5%–30% of all ovarian malignancies [1–5] and most frequently originates from colorectal cancers (CRC), followed by cancers of the endometrium, stomach, appendix and breast [6]. Although 12.5%–49% of metastatic ovarian cancers originate from CRCs, the ovary is an uncommon site for metastasis from advanced CRCs. In fact, synchronous and metachronous ovarian metastases were reported in approximately 9% and 7% of women with CRCs, respectively [7–11].

In the past decade, remarkable progress has been achieved in the treatment of advanced CRC, particularly after the introduction of effective systemic chemotherapeutic regimens, including oxaliplatin and irinotecan, and molecular-targeted antibodies [12]. These novel agents have enabled better tumour response rates and overall survivals (OS) in patients. However, despite these significant improvements, patients with ovarian metastases from CRCs have a worse prognosis than patients with CRCs that metastasised to other sites [13].

Recently, treatment strategies for advanced CRC have leaned towards mutation profile-based precision medicine; in other words, the mutational profiles of primary tumours and metastatic lesions are important when determining treatment strategies [16–25]. However, to the best of our knowledge, no study has evaluated the clinical outcomes of patients with ovarian metastases from CRCs according to their BRAF (v-Raf murine sarcoma viral oncogene homolog B) or KRAS (V-Ki-ras2 Kirsten rat sarcoma viral oncogene homolog) mutation profiles and status of microsatellite instability (MSI).

Clinicopathologic features of ovarian metastases in women with CRC

Figure 1: The STROBE diagram of the patient cohort.

Table 1: Characteristics of patients with and without ovarian metastasis

Genetic profiles of patients with CRCs who had ovarian metastases

Clinical outcomes of women with CRC 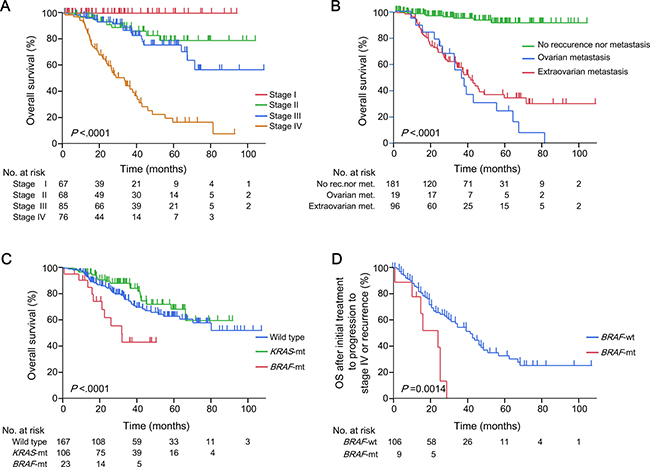 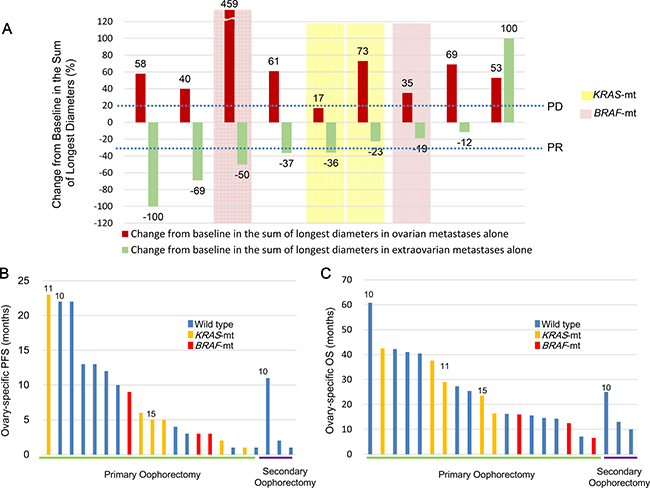 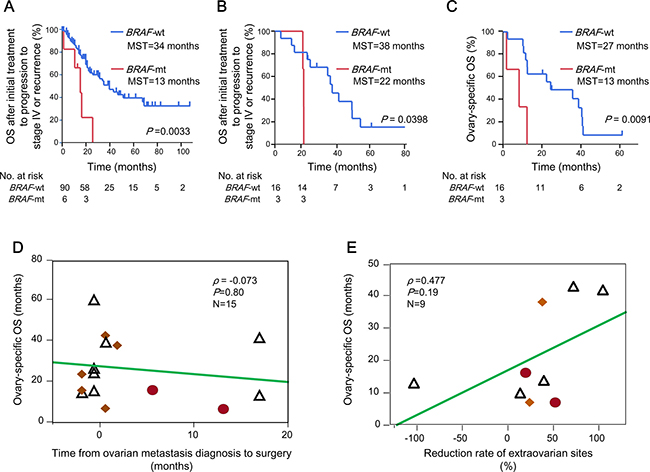 As expected, the success rates of the first oophorectomies significantly affected survivals. Those with a curability rate of R0 or R1 had an MST of the ovarian-specific OS of 43 months (95% CI, 16 months–not calculated), whereas those with R2 disease had an MST of 16 months (95% CI, 13–38 months) (P = 0.0058, Supplementary Figure 2C). In contrast, no relationship was observed between the ovarian-specific OS from the first oophorectomy and the interval from the diagnosis of ovarian metastasis to oophorectomy (ρ = −0.073, Figure 4D). Similarly, the ovarian-specific OS after the initial oophorectomies exhibited a weakly positive, but non-significant, association with the reduction rates of extra-ovarian sites (ρ = 0.477, Figure 4E).

Notably, the additional knowledge gained from the post-oophorectomy pathologic examinations suggests that the possibility of another occult cancer of the ovary should be approached with caution. Of the 11 cases that underwent bilateral oophorectomies, 9 appeared to have either unilateral or no metastases at the time of clinical and surgical diagnoses; however, 5 of these 9 cases (56%) were eventually diagnosed with bilateral metastases.

The growth of ovarian tumours can cause serious clinical symptoms, such as abdominal pain, a heavy feeling in the abdomen, constipation, frequent urination and anorexia. Systemic therapy does not usually improve these symptoms, even with the availability of new molecular-targeted agents or cytotoxic chemotherapy regimens [13–15]. In this retrospective study, we determined the clinical prevalence, outcomes and appropriate treatment strategies in a large cohort of patients with ovarian metastases from CRCs, according to their somatic mutation profiles.

While the concordant BRAF mutation and the MSI status were observed in 100% (18 of 18) paired samples of primary colorectal tumours and corresponding ovarian metastases, the KRAS mutation concordance was observed in 83.3% (15 of 18) of them. Baas et al. demonstrated the overall concordance rate of 93% (range, 76%–100%) for the KRAS mutation status between primary colorectal tumours and corresponding metastatic sites by summarising 21 studies that reported concordance of the KRAS mutation status [26]. The two cases who showed the primary tumours with KRAS wild type and the corresponding ovarian metastasis with KRAS G12S or G12V did not received any anti-EGFR antibody before oophorectomies. This strongly suggests that such disconcordance does not result from newly acquired mutations obtained from chemotherapies with anti-EGFR antibody.

Of 19 patients, the BRAF mutation was observed in 3 patients with variable duration time (0, 5.5 and 12.0 months) to initial oophorectomy from the diagnosis of ovarian metastasis and survival times after initial oophorectomy was relatively shorter than those observed in patients with BRAF wild-type (Figure 4D). In contrast to the survival time, responses to systemic chemotherapy in extra-ovarian metastatic sites observed in 2 BRAF-mutant patients (response rates, 19% and 50%) were average; however, oophorectomy-specific OSs were relatively shorter in them than in patients with BRAF wild-type (Figure 4E). From these results, it can be inferred that colorectal tumours with the BRAF mutation can shrink visibly but the PFS was shorter during systemic chemotherapy.

All patients underwent bilateral or unilateral oophorectomies via transabdominal laparotomy, with or without the resection of primary CRC or other extra-ovarian metastases and received chemotherapeutic regimens, including modified FOLFOX6 (folinic acid, fluorouracil and oxaliplatin), FOLFIRI (folinic acid, fluorouracil and irinotecan), capecitabine, CPT-11 (irinotecan, camptosar and camptothecin-11), with or without bevacizumab, cetuximab or panitumumab, either before or after surgery, at the discretion of the surgeon or the preference of the patient.

The detection of BRAF exon 15 and KRAS exon 2 mutations

All primary CRC and ovarian metastatic tissues were subjected to an MSI status analysis using four-mononucleotide repeat loci (BAT26, NR21, NR27 and CAT25), as described previously, in part [32]. Tumours that exhibited MSI in at least one mononucleotide repeat marker were classified as having MSI phenotypes, whereas those without MSI in any marker were classified as non-MSI phenotypes. An example of the MSI analysis is shown in Supplementary Figure 1.

Statistical analyses were performed using JMP software version 10.0.2 (SAS Institute, Inc., Cary, NC, USA). Categorical variables were compared using the Chi-square test. Ovarian-specific OS and PFS were estimated by univariate analyses using the Kaplan–Meier method. Cox proportional hazard regression method was used to perform univariate and multivariate analyses of OS. The regression model included clinicopathologic factors, such as age; primary tumour location; stage per the UICC guidelines; histological and ovarian metastasis status and somatic mutation profiles, such as BRAF or KRAS mutations and MSI status. Spearman’s rank correlation coefficient (ρ) was used to analyse the relationship between ovarian-specific OS and the variables of the first oophorectomy, i.e. between the time from diagnosis of ovarian metastasis to oophorectomy, and between oophorectomy-specific OS and the rate of decrease in the number of extra-ovarian sites during chemotherapy. All reported P values were calculated using two-sided tests and values of < 0.05 were considered statistically significant.

The authors thank Mr. Toru Nakai and Mrs. Tae Yamanishi for their technical assistance. We are willing to make our data, analytic methods and study materials available to other researchers. In case, this material is required, please contact the corresponding author of this manuscript.

The authors declare that there are no conflicts of interest associated with this manuscript.