*These are joint first authors

Obesity, characterised as a state of chronic low grade systemic inflammation, is recognised as an independent risk factor for cardiovascular morbidity and mortality and a significant contributor to the pathogenesis of atherosclerosis [1]. Interactions between endothelial cells and circulating monocytes, in co-existing arterial wall dysfunction and systemic inflammation, are hallmarks of this complex pathophysiological process [2]. Various adipose tissue derived bio-active molecules (adipokines) have been implicated in the maintenance of vascular homeostasis including expression and engagement of adhesion molecule receptors on both endothelial cells and monocytes such as E-selectin (endothelial selectin), vascular cell adhesion molecule 1 (VCAM-1) and intercellular adhesion molecule-1 (ICAM-1) [3]. Altered circulating adipokine concentrations have been reported in obese, insulin resistant subjects with T2DM [4–7]. Activation of these endothelial adhesion molecules via the NF-кB pathway is an important step in vascular inflammation and the development of atherosclerosis [8].

A recently discovered adipokine, chemerin, functions as a chemo-attractant protein, mediating its effects through a G-protein Coupled Receptor, Chemokine like Receptor 1, also known as ChemR23 [9]. Increased circulating levels of chemerin are found in obesity, exhibiting positive correlations with various aspects of the metabolic syndrome [10]. Studies have implicated the role of chemerin and Chemokine like Receptor 1 in the recruitment of immune cells in inflammatory and auto-immune disorders [11]. More importantly Spiroglou et al. have demonstrated increased periaortic and pericoronary adipose tissue expression levels of chemerin in patients with atherosclerosis, suggesting a possible paracrine mediated effect [12]. Additionally, we have previously demonstrated the pro-angiogenic effects of chemerin [13]. Dysregulated angiogenesis, in particular plaque neovascularisation, is a recognised contributor to symptomatic atherosclerosis [14]. NF-B is a major transcription factor in inflammatory responses, regulating a plethora of genes, pivotal in the initiation and progression of vascular inflammation [15]. Therefore, we investigated the effects of chemerin on monocyte-endothelial interaction, the involvement of endothelial specific adhesion molecules and the participation of NF-кB, MAPK and PI3Akt pathways. 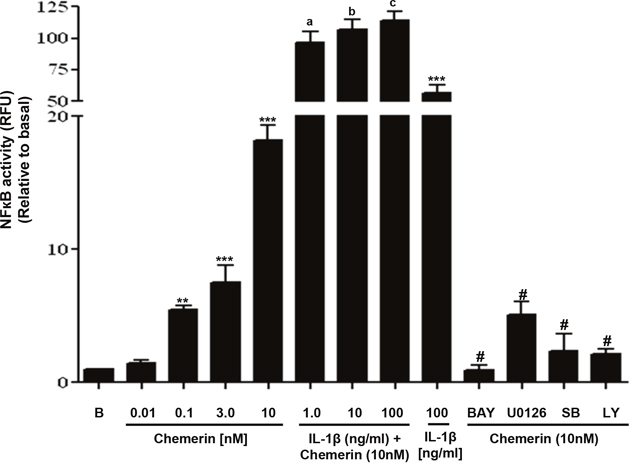 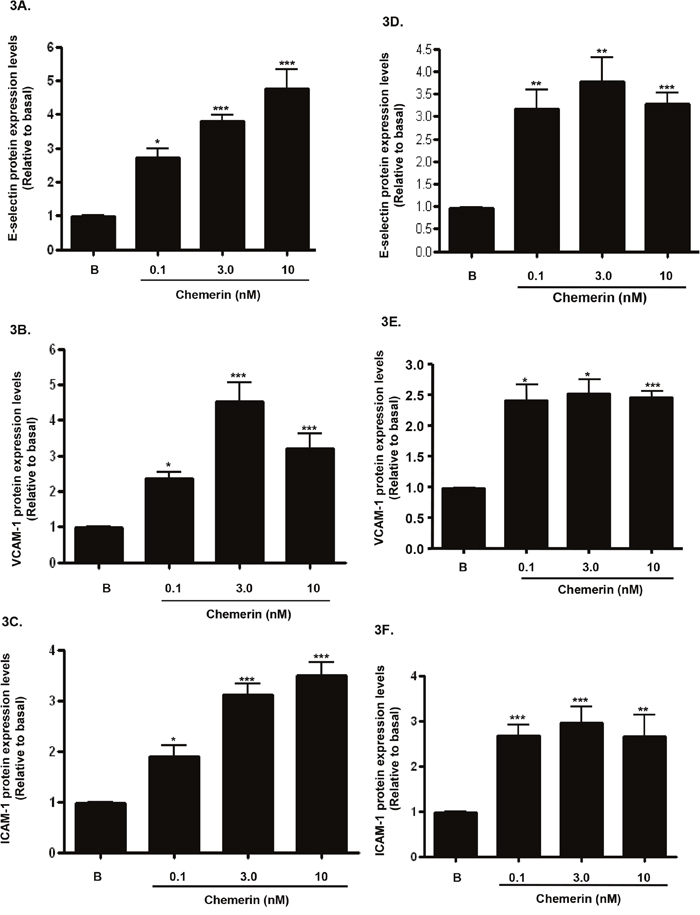 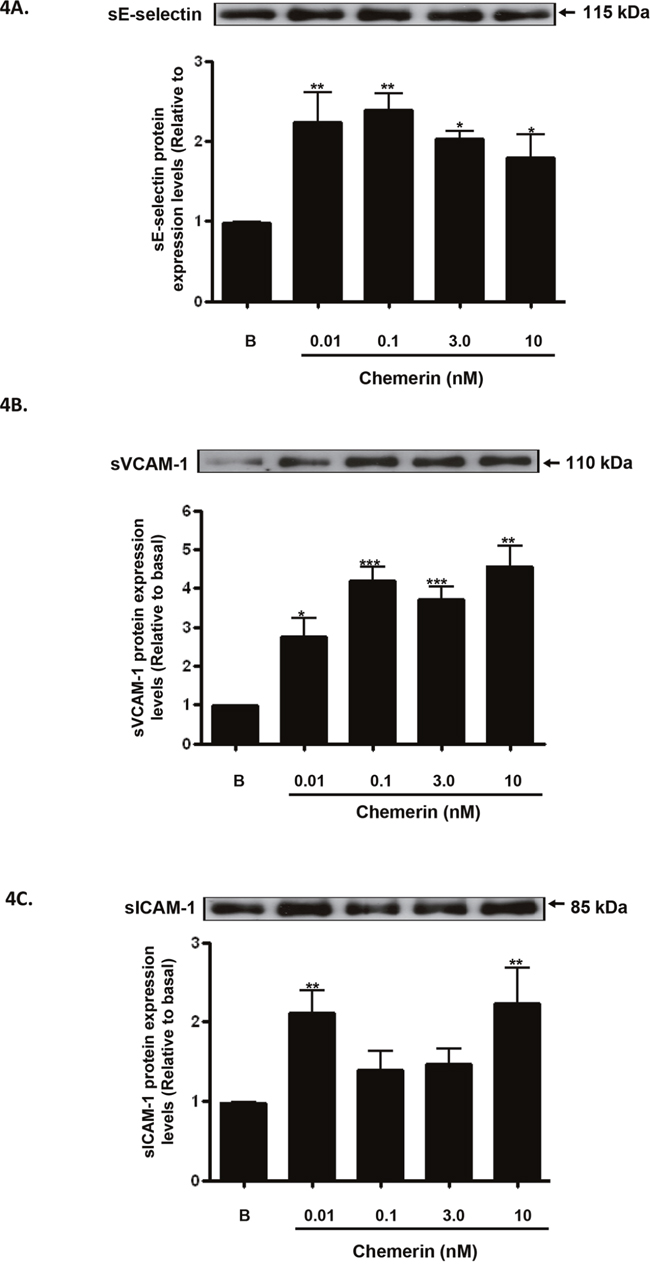 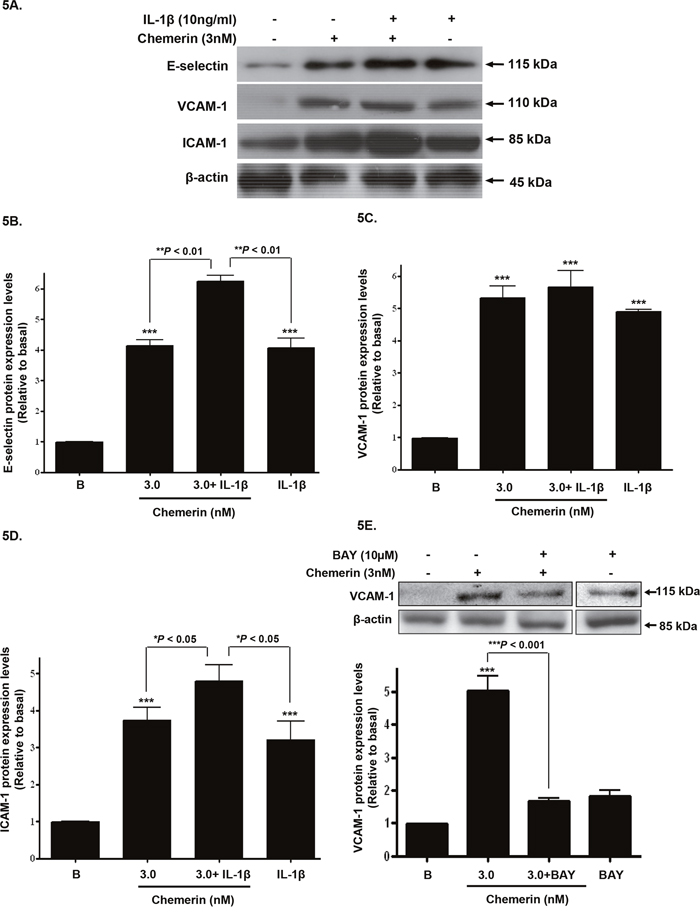 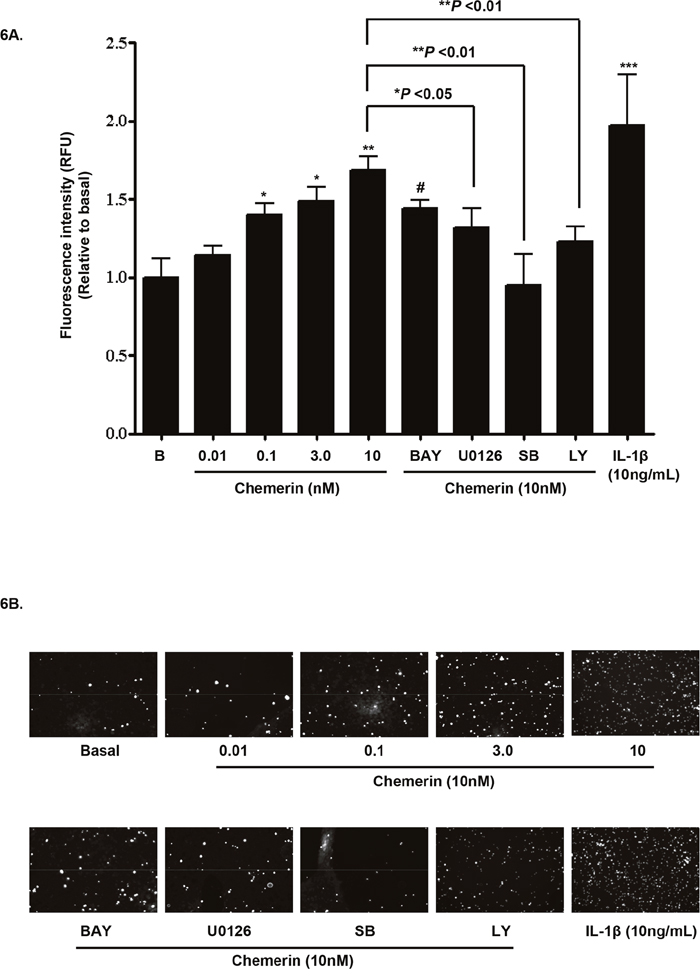 Studies have supported an important role for chemerin in the pathophysiological processes involved in obesity and diabetes [10–13]. Clinical reports show elevated circulating levels of chemerin in these states with positive correlations to various aspects of the metabolic syndrome. We have previously demonstrated significantly increased serum chemerin levels in women with polycystic ovary syndrome (PCOS) [20]; a dysmetabolic state of pro-inflammation in women [21], associated with an increased risk of developing T2DM and cardiovascular disorders [22]. Furthermore, chemerin tissue expression levels are increased in periaortic and epicardial adipose tissue depots in subjects with atherosclerosis, implicating a paracrine mediated action of chemerin [12]. Similarly, Neves et al. demonstrated that chemerin plays an important role in molecular and cellular processes associated with vascular injury and dysfunction through vascular smooth muscle cells (VSMC) oxidative stress and inflammation in a ChemR23-inhibitable manner [23, 24]. Since endothelial cells are the first line of contact with circulating mediators of inflammation, it remains an important therapeutic target in both prevention and inhibiting the progression of cardiovascular disorders. In the present study, we report that chemerin activates a pivotal pro-inflammatory transcriptional regulator NF-кB in human endothelial cells. We also demonstrate that chemerin enhances expression and secretion of endothelial cell adhesion molecules (E-selectin, VCAM-1 and ICAM-1), and promotes monocyte-endothelial adhesion.

In vascular inflammatory responses, NF-κB signaling is an important regulator of endothelial cell adhesion molecules and initiator of atherosclerotic changes including vessel wall remodeling, as part of an inflammatory response [8]. In our experiments, in addition to chemerin induced NF-κB activation, a synergistic response was observed when chemerin was co-incubated with IL-1β. In vivo studies have demonstrated that IL-1β induced atherogenic action by enhancing expression of cell adhesion molecules, leading to recruitment of monocytes [24, 25]. This is very likely the reason for the enhanced effect observed when chemerin was co-incubated with IL-1β and similar findings have been reported by others using other cytokines; though the exact aetiology for this remains elusive. Cheshire et al. demonstrated the importance of cytokine induced synergistic activation of NF-кB in pro-inflammatory states resulting in potent activation of NF-кB-dependent gene expression including cell adhesion molecules [21]. Taken together with our findings, it is plausible to suggest that chemerin may be involved in the enhancement of endothelial activation in combination with other cytokines in a pro-inflammatory milieu.

In contrast, Provoost et al. demonstrated an opposing role for chemR23 signaling of inflammatory responses in the lungs, comparing chemR23 knockout (KO) mice with corresponding wild-type (WT) mice, depending on the context of traffic-related particulate matter. The chemR23 axis showed proinflammatory properties in a model of acute lung inflammation, in contrast to anti-inflammatory effects in a model of allergic airway inflammation [26]. Similarly, Laranjeira et al. also report anti-inflammatory properties for chemerin [27]. The underlying basis of these opposing activities of chemerin/ chemR23 signaling remains unclear. Various proteases can process prochemerin to bioactive chemerin. Thus, depending on the proteases that are present in the microenvironment/organ, diverse chemerin fragments may be produced with distinct pharmacological properties [26].

Of late, it is thought that deciphering NF-κB linked multiple signaling cross talk is critical in the identification of novel therapeutic targets in combating atherosclerosis and related pathologies. Activation of NF-κB signaling involves and influences multiple signaling cascades including MAPK and PI3K/Akt pathways [28–31]. Our experiments demonstrated the involvement of MAPK and PI3K/Akt pathways in chemerin induced NF-κB activation. However, further research is needed to elucidate the interactions between these complex regulatory pathways.

Initiation, maintenance and progression of atherosclerotic changes are predominantly influenced by surface expression of cell adhesion molecules that have critical effects on inflammation and on the integrity of the vascular wall [33]. Interactions between circulating monocytes and endothelial cells lead to the initiation of early atherosclerotic changes [34]. Extending our findings to a functional monocyte-endothelial adhesion assay, we observed that endothelial cells treated with chemerin resulted in a significant increase of adhered monocytes. Our findings agree with previous reports that have reported chemerin induced adhesion with macrophages [34].

Endothelial recruitment and monocytes adhesion are the earliest detectable events in the pathogenesis of atherosclerosis. The initial steps of endothelium/leucocyte interactions are considered to involve selectins (E-, P-, L- selectin) and I-CAM, V-CAM are crucial for adhesion and migration of leucocytes into the sub-endothelium. So, the elevation of cell adhesive molecules is related to higher morbidity and these cytokines are considered as reliable biomarkers of endothelial activation and inflammation in diabetes and obesity [35]. These dynamic relationships between chemerin and atherosclerosis may give meaningful contribution to the understanding of atherosclerosis pathogenesis in these states leading to early detection and potentially the development of novel therapies [36]. In summary, our novel in vitro findings demonstrate a direct mechanism linking chemerin-induced NF-κB activation to functional changes in the endothelium. A limitation of this study is the lack of clinical evidence and in vivo animal data. Robust in vivo testing must be performed to fully understand the inflammatory properties of chemerin in ECs. Our data provide novel insights into chemerin vascular biology pertinent to atherosclerosis.

Total RNA was extracted from HMEC-1 cells Qiagen RNeasy Mini Kit according to the manufacturer’s guidelines (Qiagen, Crawley, UK). The purity of the extracted RNA was measured by a NanoDrop spectrophotometer. A set concentration of RNA was reverse transcribed into cDNA, by using Moloney murine leukemia virus reverse transcriptase (Fermentas, York, U.K.) and random hexamers (Promega, Southampton, U.K.) as primers, as previously described [17].

Real-time quantitative PCR was performed as previously described [16]. Protocol conditions consisted of denaturation at 94°C for 1 minute, then 38 cycles of 94°C for 30 seconds, 60°C for 45 seconds, and 72°C for 30 seconds, followed by extension at 72°C for 7 minutes.

For analysis, quantitative amounts of genes of interest were standardised against the housekeeping gene GAPDH. The RNA levels were expressed as a ratio, using “Delta-delta method” for comparing relative expression results between treatments in real-time PCR [18]. The sequences of the sense and anti-sense primers used were:

10μl of the reaction mixture(s) were subsequently electrophoresed on a 1% agarose gel and visualised by ethidium bromide, using a 1kb DNA ladder (Life Technologies Ltd., Paisley, UK) in order to estimate the band sizes. As a negative control for all the reactions, preparations lacking RNA or reverse transcriptase were used in place of the cDNA. RNAs was assayed from three independent biological replicates.

The PCR products from the cells were purified from the 1% agarose gel using the QIAquick Gel Extraction Kit (Qiagen, Crawley, UK). PCR products were then sequenced in an automated DNA sequencer, and the sequence data were analysed using Blast Nucleic Acid Database Searches from the National Centre for Biotechnology Information, confirming the identity of our products.

The PVDF membranes were then incubated with monoclonal primary mouse-anti-human antibodies for E-selectin, ICAM-1 and VCAM-1 (1:1000 dilutions in 0.1% Tween-20 and 5% BSA) overnight at 4°C. The membranes were washed thoroughly for 60 minutes with TBS-0.1% Tween before incubation with the secondary anti-mouse horseradish peroxidase-conjugated immunoglobulin (Dako, Ely, UK) [1:2000] or secondary anti-rabbit horseradish peroxidase-conjugated immunoglobulin (Dako, Ely, UK) [1:2000], respectively, for one hour at room temperature. Antibody complexes were visualized using chemiluminescence (ECL+GE Healthcare, Little Chalfont, UK). For standardization, the same membranes were stripped and reprobed with monoclonal primary rabbit-anti-human antibody for β-actin (1:10000 dilution).

The densities were measured using a scanning densitometer coupled to scanning software Scion Image™ (Scion Corporation, Frederick, USA). Standard curves were generated to ensure linearity of signal intensity over the range of protein amounts loaded into gel lanes. Comparisons of densitometric signal intensities for ASAA and β-actin were made only within this linearity range.

No potential conflicts of interest.