Gallotannin (or tannic acid) is a naturally occurring compound that inhibits cell growth and activity of different DNA-polymerases, including telomerase. The purpose of the present study was to gain insight into the mechanism of telomerase inhibition by gallotannin. We determined that gallotannin inhibits telomerase in vitro with an half maximal inhibitory concentrations value of 130 nM, but it does not affect telomerase complex assembly and component levels in vivo. The inhibitory activity of gallotannin against telomerase provides an additional explanation for the anti-cancer activities of this compound.

Telomeres protect the ends of linear eukaryotic chromosomes from loss of genetic information during genome replication [1]. Telomerase is the enzyme that maintains the length of telomeres in germ, stem, cancer and somatic cells with increased proliferative potential [1, 2]. Telomerase contains two core components: telomerase reverse transcriptase (TERT) and telomerase RNA (TER). TERT uses TER as a template for the processive synthesis of telomere repeats at protruding 3’-ends of linear eukaryotic chromosomes [3, 4, 5]. Telomerase is active in the majority of cancer cells and is considered a universal target for anticancer therapy [1].

Different classes of chemical compounds have been described as telomerase inhibitors [6]. For example, oligonucleotides that mimic telomere sequences are recognized by telomerase as substrates [7]. This prevents the association of telomerase with telomeres and results in stable telomere shortening. The extended telomere length in cancer cells and a number of unspecific effects limits the application of this type of inhibitor [8, 9]. Another class of telomerase inhibitors is naturally occurring compounds [10, 11]. The most common sources of different biologically active components are medicinal herbs and food products. Many products, including tea, wine, coffee, chocolate, olives, fruits, vegetables, and nuts [12], contain condensed tannins, which possess antioxidant activity [13, 14], induce apoptosis in cancer cells [15, 16] and inhibit telomerase activity [17].

Gallotannin, also known as tannic acid, is found in several plants used for medical purposes such as Caesalpinia spinosa [18], Rhus chinensis [19] and Quercus infectoria [20]. Gallotannin is a direct inhibitor of poly(ADP-ribose)glycohydrolase (PARG) [21, 22], but it also suppresses DNA polymerases [23] and the proteasome [24]. In addition, gallotannin can also induce senescence [25] and the expression of inflammatory genes and cytokines [26, 27, 28]. Gallotannin treatment causes an anti-metastatic effect, as was revealed in a murine model [29]. Finally, it was shown recently that gallotannin inhibits telomerase activity in vitro [17], in vivo and in a murine model [30], but the molecular mechanisms of this inhibition are unknown. Here, we show that treatment of human cell lines with gallotannin inhibits telomerase activity both in vitro and in vivo but does not have an impact on the expression level of telomerase components and the assembly of the enzyme.

Gallotannin inhibits telomerase in vivo and in vitro

Treatment of HEK293T cells with gallotannin for 24 hours did not have an effect on cell viability for all concentrations tested (Figure 1A), in agreement with previously published data [31, 32], while treatment for 36 and 48 hours resulted in increased detachment and cell death. Therefore, we analyzed the influence of gallotannin on telomerase activity after 24 h of treatment. We observed significant inhibition of telomerase in cells treated with 40 μM and more of gallotannin (Figure 1B). We further cultivated HEK293T cells for 50 population doublings (PD) with various concentrations of gallotannin and analyzed telomere length by the telomere restriction fragments (TRF) technique. The cells treated with 2,5 μM and 400 nM of gallotannin for 50 PD did not show any differences in telomere length (Figure 1C).

We further decided to check whether gallotannin inhibits telomerase directly because inhibition effect of gallotannin on many cellular polymerases was shown previously [23]. To test telomerase activity in vitro we used classical Quantitative Telomerase Repeat Amplification Protocol (RQ-TRAP), based on qPCR amplification of a DNA substrate elongated by telomerase, partially purified from a cell-free extract of HEK293E cells transfected with the plasmids overexpressing both hTR and hTERT. The telomerase elongation reaction was carried out in the presence of 20 μM of gallotannin, a concentration that does not inhibit Taq-polymerase when used in the RQ-TRAP assay (Figure 2A). The half maximal inhibitory concentration (IC50) of gallotannin was calculated to be 128,9 ± 18,5 nM (Figure 2B), demonstrating that this compound is an effective telomerase inhibitor.

The effect of gallotannin on telomerase activity may be due to the direct interaction of the compound with the enzyme, the decreased expression level of complex components, or defects in telomerase assembly.

To check the influence of gallotannin on the expression level of telomerase components, RT-qPCR and Western blotting analyses of cellular extracts were performed. The level of hTR was unchanged in cells treated with gallotannin in the concentration range from 1,2 nM to 20 μM, as revealed by RT-qPCR (Figure 3A). The hTERT expression level was also unaffected (Figure 3B). Gallotannin is known as an inhibitor of PARG that cleaves branches of poly(ADP-ribose) synthesized by poly(ADP)-ribose polymerases (PARP) [22]. The treatment of cells with gallotannin should increase the level of poly(ADP-ribosyl)ation (PARylation) proteins as a result of PARG inhibition. PARylation should increase the molecular weight of the modified proteins, which may be detected by Western blotting as a shift of the initial protein band. The unchanged molecular weight of hTERT after gallotannin treatment (Figure 3B) allows us to infer that the activity hTERT is not regulated via PARylation at the conditions used in the experiments. 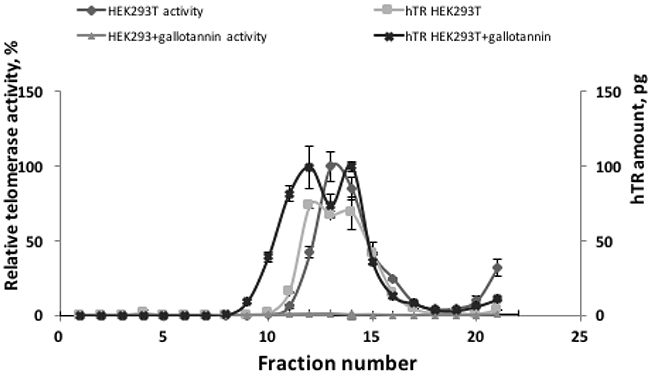 Figure 4: Gallotannin does not affect telomerase complex assembly. Cellular lysates from HEK293T cells and HEK293T cells treated with 20 μM of gallotannin were fractionated by ultracentrifugation in sucrose concentration gradient. Obtained fractions were analyzed for telomerase activity and hTR level.

Tannic acid and its derivatives inhibit many intracellular components and affect cell proliferation. Telomerase inhibition by tannic acid was demonstrated previously [17], and we confirmed these findings. The blocking of telomerase activity was proposed as the major mechanism of tumor growth inhibition by dietary polyphenols in a murine model [30]. The inhibition of telomerase may occur due to a decreased amount of telomerase components in cells. However, our data demonstrate that gallotannin does not change the amount of hTR and hTERT in HEK293T cells. Interestingly, a decreased expression level of known hTERT inhibitor NF-kB during gallotannin treatment was observed in A549 cells lines derived from human lung carcinoma [26].

Gallotannin is known as an inhibitor of PARG that cleaves branches of poly(ADP-ribose) synthesized by PARP enzymes [22]. Poly(ADP-ribosy)lation is the posttranslational modification that provides proteins with covalently attached negatively-charged and branched polymers of poly(ADP-ribose). This modification may influence protein-nucleic acid interactions [33]. The PARylation of hTERT [34] and telomerase-associated regulatory protein TEP1 [35] was shown previously in HeLa cells. Our data speak in favor of the view that hTERT modification was not observed in HEK293T cells under gallotannin treatment.

The fact that gallotannin inhibits the activity of a wide range of key cellular enzymes, along with our data on the inhibition of telomerase, makes it a prospective anticancer drug. Telomerase inhibition by gallotannin will induce telomere shortening that is necessary for a synergetic inhibitory effect on cancer cell growth. Our findings suggest that gallotannin may be a prospective candidate drug to be used for cancer therapy either as an individual component or in combination with other medical compounds.

The human embryonic kidney cell line HEK293T was purchased from the ATCC and maintained in Dulbecco’s modified Eagle’s medium (DMEM), supplemented with 10% heat-inactivated fetal bovine serum (FBS), 100 Units/mL penicillin, and 100 mg/mL streptomycin at 37°C in a humidified incubator with 5% CO2.

For the MTS assay, the CellTiter 96 Aqueous One Solution Cell Proliferation Assay kit was used according to the manufacturer’s instructions. HEK293T cells were plated in 96-well plates at a density of 1×104 cells/well. After overnight incubation, the cells were treated with various concentrations of gallotannin for 24 hours. Untreated cells were used as a control. Absorbance at 490 nm in each well was recorded using a Victor plate reader (PerkinElmer) and normalized to the PBS-treated cells as 100% of viability. Each experiment was performed in triplicate.

Classical TRAP assay was performed as previously described [42]. Telomerase extracts from 2000 cells in CHAPS lysis buffer were added to TRAP buffer containing 100 ng of TS primer (5′-AATCCGTCGAGCAGAGTT-3′) and 2μCi α-32P-dATP. After 30 min of incubation the mixture containing 100 ng of ACX primer (5′-CCCTTACCCTTACCCTTACCCTTA-3′), Taq-polymerase was added, and amplification of DNA products was performed on a Mastercycler(Eppendorf). Amplification products were purified by phenol/chloroform extraction, dissolved in formamide dye and separated on 10% sequence PAGE. The gel was exposed to a Phosphor-imager screen and scanned using a Typhoon FLA 9500 (GE Healthcare). The RQ-TRAP assay was performed as a classical TRAP but with the addition of SYBR green I. Amplification and detection were performed on a CFX96 Real-Time System (Bio-Rad) [43].

RNA from each fraction after ultracentrifugation or total RNA from the cells grown in the presence of gallotannin was extracted using the Ambion Pure Link kit according to the manufacturer’s instructions. Reverse transcription was performed with the Maxima First strand cDNA synthesis kit, and the PCR reaction was made with hTR-F1 (5′-GTGGTGGCCATTTTTTGTCTAAC-3′) and hTR-R1 (5′-TGCTCTAGAATGAACGGTGGAA-3′) primers in a CFX-96 Real-Time System (Bio-Rad) for 30 amplification cycles. For telomerase assembly analysis, the hTR RNA T7-transcript was used as a standard for quantification [36]. The amount of hTR in cells treated with gallotannin was normalized to the hTR in untreated HEK293T cells.

For IC50 calculations, serial 2-fold dilutions of gallotannin in the RQ-TRAP assay were used. The values were normalized to those in HEK293T cells. IC50 was calculated with the online IC50 calculation tool (http://www.ic50.tk/).

Cells were grown either in the absence or in the presence of gallotannin, lysed for 30 min in ice-cold RIPA buffer with 0.2 mM PMSF and centrifuged at 4°C for 15 min. The supernatant was collected, protein concentration was measured by the Bradford assay, and proteins were resolved in 8% PAGE. After transferring to a PVDF membrane and blocking by 3% BSA in TBST, the membrane was incubated with anti-TERT antibodies and secondary anti-rabbit HRP conjugated antibodies.

Values are given as the mean ± SE. Data were analyzed by one- and two-way ANOVA, and differences between the control and treated groups were determined using the Bonferroni test. Differences were considered significant at p < 0.05 and determined with GraphPad Prism 7.0 software (La Jolla, CA, USA).