Pomalidomide promotes chemosensitization of pancreatic cancer by inhibition of NF-κB

*This author contributed equally to this work

Introduction: Nuclear factor κB (NF-κB) plays an important role in cancer progression and causes therapeutic resistance to chemotherapy. Pomalidomide, a third-generation immunomodulating drug derived from thalidomide, has been approved for uncontrolled multiple myeloma. We hypothesized that pomalidomide may inhibit the anticancer agent-induced NF-κB activity and enhance chemosensitization of combination chemotherapy with gemcitabine and S1 (Gem/S1) in pancreatic cancer.

Methods: In vitro, we assessed NF-κB activity, induction of caspase cascade, cell apoptosis and cell proliferation using human pancreatic cancer cell lines (MIA PaCa-2 and PANC-1). In vivo, we established an orthotopic xenograft mouse model for human pancreatic cancer by injection of PANC-1 cells. At 5 weeks after injection, the animals were randomly divided into four groups and treated with Gem (100 mg/kg) /S1 (10 mg/kg), with oral administration of pomalidomide (0.5 mg/kg), with combination of gemcitabine, S1, and pomalidomide or vehicle only.

Results: Although chemotherapeutic agents induced NF-κB activation in pancreatic cancer cells, pomalidomide inhibited anticancer agent-induced NF-κB activation (p < 0.01). Of the four groups tested for the apoptosis-related caspase signals and apoptosis under both in vitro and in vivo conditions, Gem/S1/Pomalidomide group demonstrated the strongest activation of the caspase signals and proapoptotic effect. In Gem/S1/Pomalidomide group, cell proliferation and tumor growth were slower than those in other groups both in vitro and in vivo (p < 0.01). There were no obvious adverse effects except for thrombocytosis by using pomalidomide.

Pancreatic cancer is the fourth leading cause of death in developed countries [1]. At the time of diagnosis, one-half of the patients present with metastatic disease and approximately 30% with unresectable locally advanced disease [2]. In addition, because of the rapid tumor growth and the high metastatic potential, the overall 5-year relative survival rate was only 10% [3]. Recently, the combination chemotherapy of gemcitabine and S1 (Gem/S1) is one of the most effective regimens for the treatment of locally advanced and metastatic pancreatic cancer in Korea and Japan [4]. However, the objective response rate of Gem/S1 therapy is limited to 30%, and the median survival time is only 10.1 months [5].

Transcriptional factor, nuclear factor kappa B (NF-κB) plays an important role in the regulation of cell proliferation, inflammation and oncogenesis [6], and constitutive NF-κB activation leads to the aggressive behavior of pancreatic cancer [7, 8]. In addition, many anti-cancer agents including gemcitabine induce NF-κB activation, which aggravates chemoresistance in cancer cells [9]. Therefore, control of chemotherapy-induced NF-κB activation could potentially enhance chemosensitivity. NF-κB consists of heterodimetric complex made up of the p65 (RelA) and p50 proteins, and normally presents in the cytoplasm as an inactive form with an inhibitor of NF-κB (IκBα) [10]. NF-κB activators including anticancer agents trigger the pathway run-through of IκBα phosphorylation by IκB kinase (IKK) complex, and NF-κB release from IκBα. The released NF-κB translocates into the nucleus and initiates target gene transcription and expression, including anti-apoptotic proteins such as cleaved inhibitor of apoptosis 1 (cIAP1), cIAP2, X-linked inhibitor of apoptosis, and Survivin [11]. We previously reported that nafamostat mesilate, a synthetic serine protease inhibitor, inhibited gemcitabine-induced activation of NF-κB and increased chemosensitivity to gemcitabine and cell apoptosis in pancreatic cancer [12].

Pomalidomide is one of the third generation immunomodulating drugs (IMiDs), which is derived from thalidomide and has been approved in the United States for the treatment of relapsed or refractory multiple myeloma [13]. Anticancer effects of IMiDs in hematologic malignancies have been reported including suppression of angiogenesis, as well as immunomodulation and inhibition of cytokine production [14]. For multiple myeloma, pomalidomide induced G0/G1 cell cycle arrest by upregulating the expression of p21waf1 [15], anti-angiogenesis by multiple inhibition of endothelial cell function [16] and apoptosis through upregulation of caspase-8 by inhibiting the expression of IAP2 and tumor necrosis factor (TNF)-related ligand [17]. Furthermore, thalidomide, a predecessor of pomalidomide, exerts suppression of NF-κB activation and apoptosis induction via caspase cascade [18]. Although a few reports described pomalidomide as a NF-κB inhibitor in multiple myeloma, the role of pomalidomide in pancreatic cancer has not been investigated.

The purpose of this study is to demonstrate that pomalidomide enhances chemosensitization of pancreatic cancer by inhibition of Gem/S1-induced NF-κB activation in vitro and in vivo. 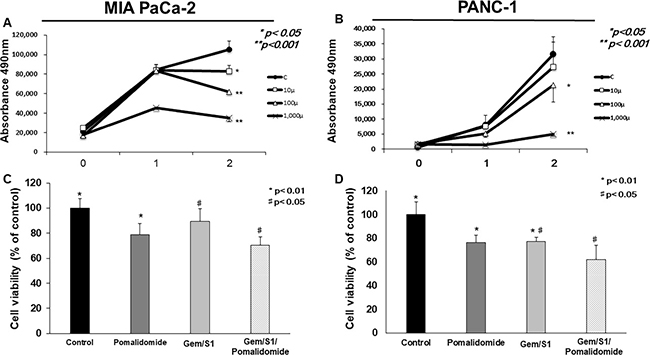 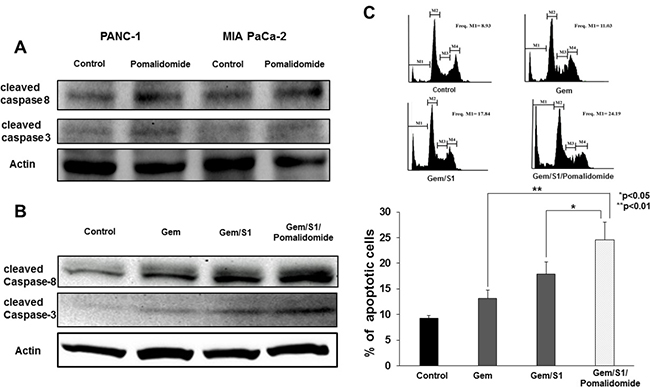 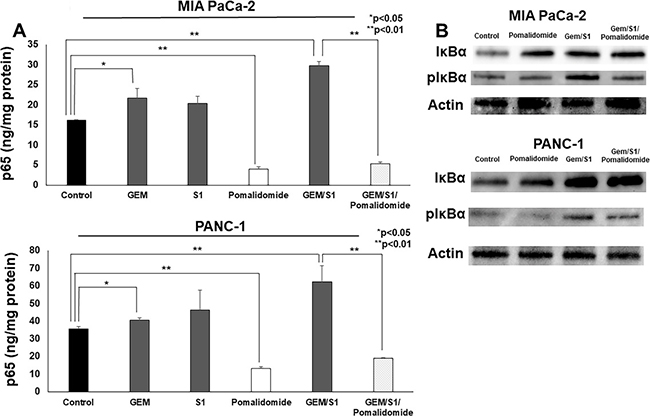 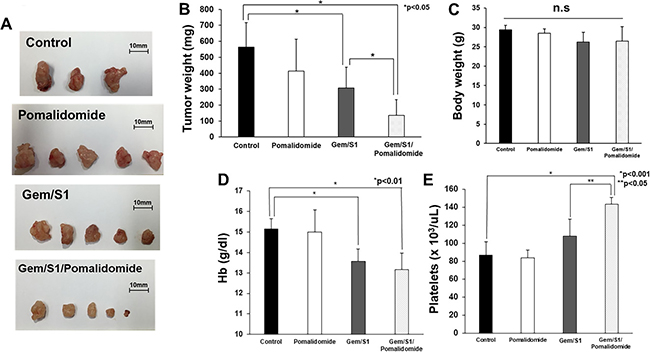 The effects of pomalidomide on NF-κB activation and apoptosis in pancreatic tumor were assessed using resected specimens. To verify the in vitro findings regarding the roles of pomalidomide, in vivo expression levels of apoptosis-related proteins and NF-κB activation were assessed. Consistent with the in vitro data, these protein expression patterns in xenograft tumors treated with Gem/S1/Pomalidomide showed a pattern similar to those observed in vitro (Figure 5A). 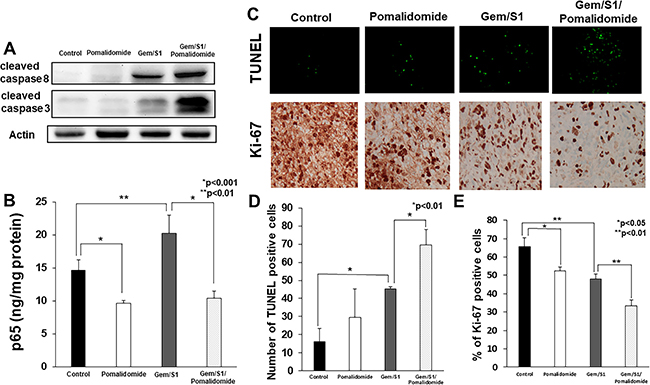 Thalidomide, the first generation IMiDs, suppresses NF-κB activation via inhibition of IκBα phosphorylation [18]. In the present study, we found that pomalidomide which is a third generation IMiDs derived from thalidomide has similar effect on IκBα phosphorylation in pancreatic cancer cells. Furthermore, pomalidomide enhanced gemcitabine and S1-induced apoptotic signals and apoptosis. Consequently, pomalidomide demonstrated enhanced gemcitabine and S1-induced antitumor effects in vivo, suggesting that triple combination therapy of gemcitabine, S1 and pomalidomide had a synergistic anticancer effect on pancreatic cancer. To our knowledge, this is the first report of novel function of pomalidomide as an NF-κB inhibitor in non-hematologic malignancies.

Pomalidomide originally has been used for multiple myeloma with dexamethasone. The safety of pomalidomide has been validated in several clinical trials. Therefore, this combination therapy could easily be applicable to clinical practice. Several adverse effects have been reported in the combination with pomalidomide and dexamethasone for the patients with multiple myeloma. The most common grade 3 or 4 toxicities were primarily neutropenia, which occurred in 32–65% of the patients [28–30]. Other hematological grade adverse effect was anemia in 5–36% and thrombocytopenia in 3–31% [28–30]. Venous thromboembolic events were reported as an important non-hematological adverse effect. Therefore, all patients receiving pomalidomide therapy were required to administer thromboprophylaxis, which reduced the rate of venous thromboembolic events to 2–3% [28–30]. In the current study, both of combination therapy of Gem/S1 with or without pomalidomide showed anemia by 6 weeks of therapy, but there were no significant differences between Gem/S1 with pomalidomide and Gem/S1 group (Figure 4D). On the contrary, Gem/S1/Pomalidomide therapy demonstrated thrombocytosis, which suggested thrombotic tendency (Figure 4E). Therefore, the patients with pancreatic cancer may require thromboprophylaxis during the therapy.

In summary, the current study demonstrated that pomalidomide enhanced Gem/S1-induced cell apoptosis by inhibiting NF-κB activation in pancreatic cancer in vitro and in vivo. IMiDs could be a novel potential option for chemotherapy in pancreatic cancer.

Five-week-old male nude mice (BALBc nu/nu) purchased from CLEA Japan Inc. (Tokyo, Japan) were housed under specific pathogen-free conditions in a biologic cabinet at the Laboratory Animal Facility of The Jikei University School of Medicine. We established an orthotopic pancreatic cancer xenograft model in mice by injection of 5.0 × 106 PANC-1 cells suspended in 50 μL of phosphate buffer saline (PBS) into the tail of the pancreas. At 5 weeks after injection, the animals were treated with oral administration of pomalidomide (0.5 mg/kg) three times a week (Pomalidomide group), intravenous (i.v.) injection of Gemcitabine (100 mg/kg) once a week in condition with oral administration of S1 (10 mg/kg) three times a week (Gem/S1 group), or combination therapy of Gemcitabine, S1, and pomalidomide (Gem/S1/Pomalidomide group). For control group, the equal amount of distilled water was injected (i.v.) weekly and 5% of DMSO (p.o.) three times a week. To measure full blood counts as the toxicity of treatment by Celltac α MEK-6358 (NIHON KOHDEN, Tokyo, Japan), blood samples were taken at 6 weeks after treatment. At 6 weeks after treatment, the animals were humanely killed and the pancreatic tumor were excised. This research was approved by the Institutional Animal Care and Use Committee of The Jikei University School of Medicine (2015-002).

Pancreatic cancer cells were seeded into 96-wells plates (5 × 103 cells in each well), and were incubated with each treatment for appropriate time. Cell proliferation was measured using a CellTiter-blue Cell Viability Assay Kit (Promega, Madison, WI) according to the manufacturer’s instructions. Combination index (CI) was calculated [32].

Lysate protein was extracted from whole-cells (5 × 106 cells for each) after each treatment for 24 hours in vitro and from excised tumor tissue after treatment in vivo. This protocol for Western blot analysis was described in a previous study [33]. After incubating the blots in each primary antibody (1:1,000 dilution) overnight, membranes were incubated with peroxidase-labeled secondary antibody (1:10,000 dilution, Histofine; Nichirei, Tokyo, Japan) for 2 hours and detected by using Clarity Max Western ECL Substrate (BIO-RAD, Hercules, CA, USA). Protein bands were detected using a Chemi Doc XRS+ system and Image Lab Softwear (BIO-RAD).

After treatment with each regimen for 48 hours, 1 × 105 cells were harvested and fixed in 70% ethanol and stored at –20° C for at least 24 hours. After centrifugation, the cells were washed with PBS, and re-suspended in PBS with RNase for 4 min at 4° C. DNA was stained with propidium iodide solution (Sigma-Aldrich, St. Louis, MO, USA) for 30 minutes in the dark at 4° C. DNA content was determined with a MACSQuant R Analyzer (Miltenyi Biotec K.K., Tokyo, Japan). The data were analyzed with MACSQuantify™ Softwear version.2.5.

Data were expressed as a mean ± SD. Non-paired 2-tailed t-test was used for statistical analysis. All P value were considered statistically significant at < 0.05.

We have no conflicts of interest to declare.

This work was supported by JSPS KAKENHI (Grant Number 15K19911).

14. McCurdy AR, Lacy MQ. Pomalidomide and its clinical potential for relapsed or refractory multiple myeloma: an update for the hematologist. Ther Adv Hematol. 2013; 4:211–216.