Materials and Methods: A literature search of PubMed, Embase, China National Knowledge Infrastructure (CNKI) and Wanfang databases up to March 31, 2017 was conducted and 30 eligible articles with 4482 cases and 6681 controls were finally recruited. The strength of correlation between GSTT1 polymorphism and the susceptibility of esophageal cancer was assessed by the crude odds ratios (ORs) with 95% confidence intervals (CIs). Subgroup analyses and sensitivity analyses were performed to further identify the association.

Esophageal cancer is the sixth leading cause of cancer-related mortality and the eighth most common cancer worldwide [1]. An estimated 455,800 new esophageal cancer cases and 400,200 deaths occurred in 2012 worldwide [2]. The two major types are esophageal squamous cell carcinoma (ESCC) and esophageal adenocarcinoma (EADC). Smoking and drinking are well-known environmental risk factors for ESCC, whereas obesity and chronic gastroesophageal refluxing are main EADC risk factors. However, only a subset of individuals exposed to those environmental risk factors develop EC, suggesting a role of host susceptibility factors. Some studies have suggested that genetic polymorphisms might explain individual differences in susceptibility to esophageal cancer [3, 4].

Glutathione-S-transferases (GSTs) are important phase II biotransformation enzymes that catalyzing the nucleophilic addition of glutathione to several hazardous xenobiotics, including phase I electrophilic and carcinogenic metabolites [5]. However, these enzymes can also activate certain chemicals that target cellular proteins and DNA to elicit detrimental carcinogenic effects through genotoxic and non-genotoxic mechanisms. One of important enzymes in GSTs family is GSTT1. GSTT1 is genetically polymorphic, and deletion polymorphism of the GSTT1 loci (null genotype) results in the loss of functional activity. Several studies have found that GSTT1 null genotype is strongly associated with susceptibility to a number of cancers, such as colorectal, renal and oral cancers et al. [6–8]. Previous studies have been published to estimate the association between GSTT1 null genotype and the risk of esophageal cancer, but the results are inconsistent [9–11].

To date, several meta-analysis studies have reported the association between null GSTT1 genotype and the risk of esophageal cancer. However, the results of these studies remain outdated and incomprehensive [12–14]. In the last 4 years, many case-control studies were published to estimate this association. Thus, to obtain a conclusive result about this association, we performed current meta-analysis that includes all recent publications to review and summarize the association between the GSTT1 polymorphism and the risk of esophageal cancer.

In total, 100 articles were retrieved. Figure 1 summarized the selecting process. Finally, a total of 30 studies with 4482 cases and 6681 controls met the inclusion criteria [9–11, 15–41]. Among them, 18 were from Asians, 10 were from Caucasians, and 2 were from Africans. There were 21 studies focused on the risk of ESCC with 3272 cases and 5535 controls, and 8 studies focused on the risk of EADC with 646 cases and 1908 controls. Characteristics of included studies and the distribution of GSTT1 polymorphism are summarized in Table 1 and Table 2, respectively. 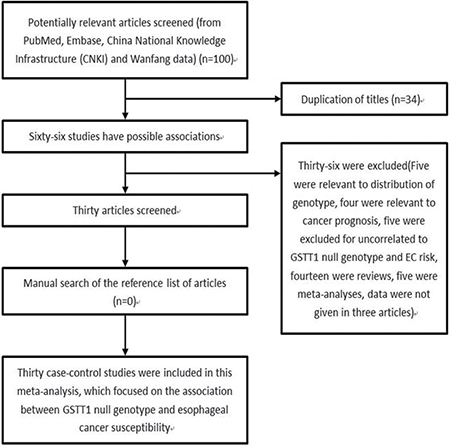 Table 1: Characteristics of the individual studies included in the meta-analysis

Table 2: Distribution of GSTT1 null genotype among cases and controls 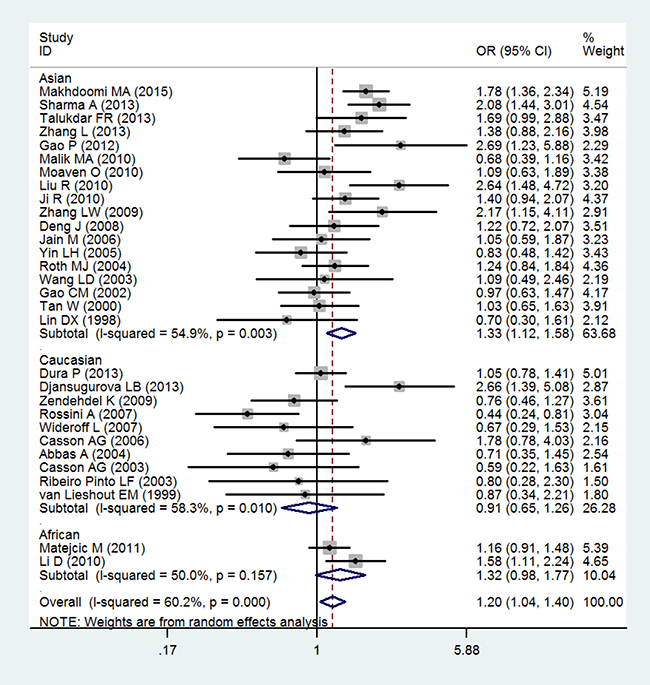 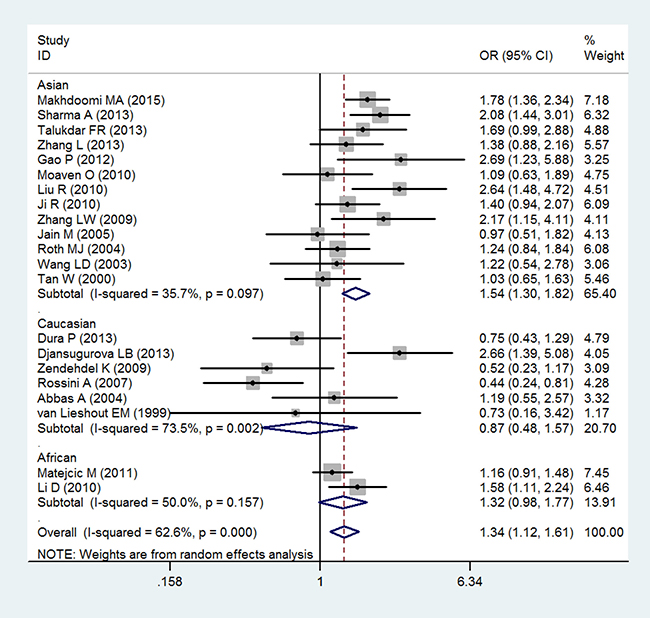 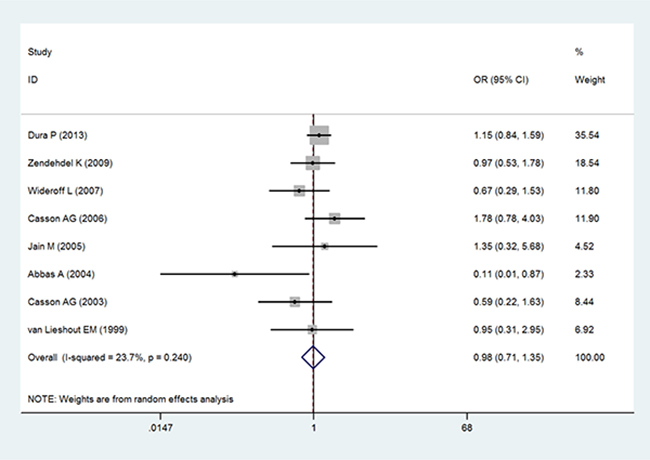 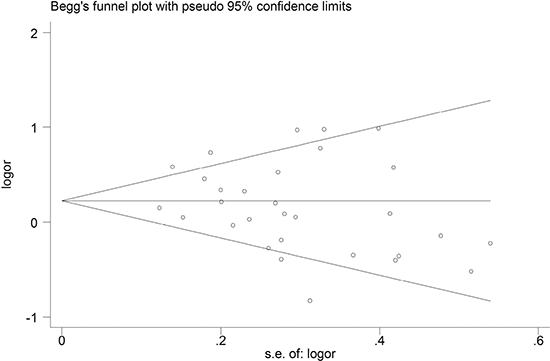 The sensitivity analysis was conducted to test the influence of an individual data on the pooled ORs and CIs by eliding a study in turn. Our findings suggested that the present meta-analysis results were relatively robust and stable (Figure 6). 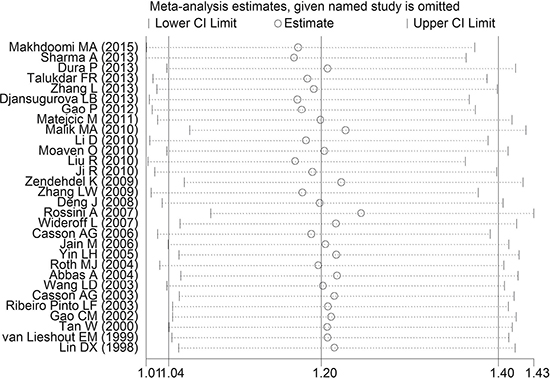 As showed in Figure 2 and Figure 3, heterogeneity was significant in overall and in some subgroups. Thus, we measured the sources of heterogeneity by subgroup analysis. The results showed that Caucasians may lead to the major source of heterogeneity.

GSTT1, encodes an enzyme that plays a crucial role in the detoxification of a variety of endogenous or exogenous carcinogens. It is located on 22q11.23 with 8146 base pairs, 5 exons and 4 introns in all [5]. GSTT1 is genetically polymorphic, and GSTT1 null genotype results in the loss of functional activity [12]. Our results demonstrated that GSTT1 null genotype significantly increased overall esophageal cancer risk.

Some limitations must be acknowledged in the current meta-analysis. First, significant heterogeneity was observed between publications for GSTT1 null genotype. Potential sources of heterogeneity include the study design, publication year, ethnicity, country, histological type, sample size, and so on. When subgroup analyses were carried out according to ethnicity and histological type, this heterogeneity was reduced or removed in some subgroups, implying different effects on histological types and ethnic populations. These findings should be interpreted with very cautions. Second, our findings were based on unadjusted ORs and CIs, whereas a more precisely investigation could be performed if the sufficient individual data were available. Third, only two African studies were recruited in the current meta-analysis, the results in African population should be interpreted with caution. More large scale studies are needed to verify the results in Africans. Finally, due to lack of uniform individual-level data, further stratified analysis to measure any interactions between gene–gene variation and gene-metabolic traits was not performed.

Pubmed, Embase, China National Knowledge Infrastructure (CNKI) and Wanfang databases (the search was updated in March 31, 2017) were searched using the following terms: ‘glutathione S-transferase T1’ or ‘GSTT1’, ‘polymorphism’ or ‘variant’, and ‘esophageal’ or ‘esophagus’, and ‘cancer’ or ‘carcinoma’ or ‘tumor’ or ‘malignancy’. The literature search was limited to English or Chinese articles. Additional publications were identified by a manual search based on references of retrieved studied or reviews.

The selection criteria were: (1) in a case-control study design, (2) studies that evaluated the relationship between the GSTT1 null genotype polymorphism and esophageal cancer, (3) usable data on genotype frequency. Thus, reports without usable data, reviews, comments and duplicated publications were excluded.

The data were collected by two independent reviewers. The extracted information contained: first author, year of publication, country of origin, ethnicity, number of cases and controls, genotyping method and characteristics of cases and controls. When come to conflicting assessment, disagreements were settled through a discussion among all authors.

The strength of correlation between GSTT1 null genotype and the susceptibility of esophageal cancer was assessed by the crude odds ratios (ORs) with 95% confidence intervals (CIs). A P < 0.05 (two-tailed) was considered as statistical significance. A Chi-square-based I2 test was used to detect heterogeneity [43] and an I2 < 25% indicates low heterogeneity, 25% ≤ I2 ≤ 50% indicates moderate heterogeneity, and I2 > 50% indicates large heterogeneity [44]. When I2 > 50% or P < 0.10 (two-sided), the random-effects model (the DerSimonian-Laird method) was utilized to pool the data [45], otherwise the fixed-effects model (the Mantel-Haenszel method) was used [46]. Subgourp analyses were conducted according to different ethnicity to identify the specific effects of heterogeneity. Publication bias was assessed by Begg’s funnel plot and Egger’s test [47]. Sensitivity analyses were conducted by one-way method. All statistical analyses were performed using STATA version 12.0 software (Stata Corporation, College Station, TX, USA).

FH, NZ and LZ designed the study. All authors were involved in article search, extraction, analysis and interpretation of data. FH drafted the manuscript, which was critically revised by NZ and LZ. All authors read and approved the final manuscript.

We thank Dr. Haiyong Gu for his invaluable help. This study is supported in part by Changzhou High-Level Medical Talents Training Project (No: 2016CZBJ043) and The Applied Basic Research Programs of ChangZhou (No: CJ20159030).