Purpose: TP53 signature has a robust predictive performance for prognosis in early-stage breast cancer, but the experiment that reported this relied on public microarray data and fresh-frozen samples. Before TP53 signature can be used in a clinical setting, a simple and low-cost diagnostic system using formalin-fixed paraffin-embedded (FFPE) samples is needed. New treatments based on the biological characteristics of TP53 signature are expected to follow.

Results: TP53 signature was a strong predictor of prognosis and was also more accurate than other gene expression signatures and independent of other clinicopathological factors. TCGA data analysis showed that risk score of TP53 signature was an index of chromosomal and genomic instability and that TP53 signature mutant type was associated with higher PD-L1 expression, variation in copy numbers, and numbers of somatic mutations.

Conclusions: TP53 signature as diagnosed using the nCounter system is not only a robust predictor of prognosis but also a potential predictor of responsiveness to immune checkpoint inhibitors.

To date, diagnostic systems for TP53 signature have been based on microarrays. Before the robust predictive ability of TP53 signature can be used in an ordinary clinical situation, a simple and low-cost diagnostic system for TP53 signature using formalin-fixed paraffin-embedded (FFPE) tissue samples is absolutely needed. The nCounter (Nanostring Technology, Washington, CA, USA) is a gene expression analysis machine which can analyze a maximum of 800 kinds of gene expression values at the same time without PCR reaction [19]. The Prosigna Assay, based on PAM50 gene signature, on the nCounter Analysis System has already been approved by the FDA. Developing a diagnostic system for TP53 signature using the nCounter would provide us with more accurate prognostic predictive ability for early breast cancer in actual clinical situations. At the same time, it is necessary to develop new therapeutic strategies for patients with poor prognosis as diagnosed by TP53 signature.

Patients and samples for analysis 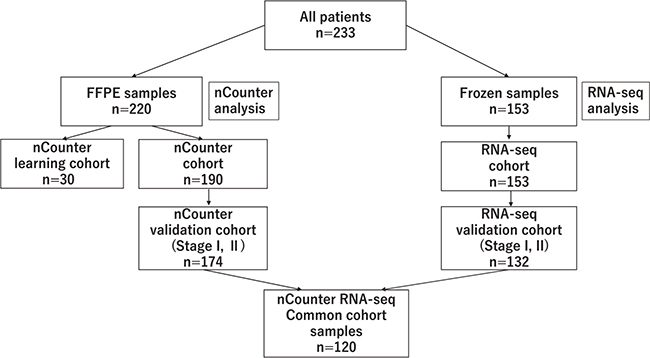 Figure 1: Details of the cohort, shows the flow chart of the breakdown of patients analyzed with nCounter and RNA-seq.

Development of TP53 signature for clinical use

The previous reports of TP53 signature data were derived from microarray data using FF samples. In order to evaluate whether the data acquired through nCounter analysis from FF and FFPE were comparable, we examined correlations between the expression levels of the 31 genes comprising the TP53 signature in FF and FFPE samples. The gene-set used in this study is the same as gene-set used in original TP53 signature. Some reports have confirmed good correlation between the expression values of FFPE and FF samples [20]. Good correlations were observed between expression values from FFPE and FF samples as counted by nCounter (Supplementary Supplementary Figure 1). In all patients, Pearson’s correlation coefficient was over 0.9. This result showed that FFPE samples are suitable for use in diagnosis of TP53 signature with the nCounter system.

P*: Chi-square test was used for statistical analysis of patients' characteristics except for age.

Kruskal–Wallis test was used for statistical analysis of patients' age. 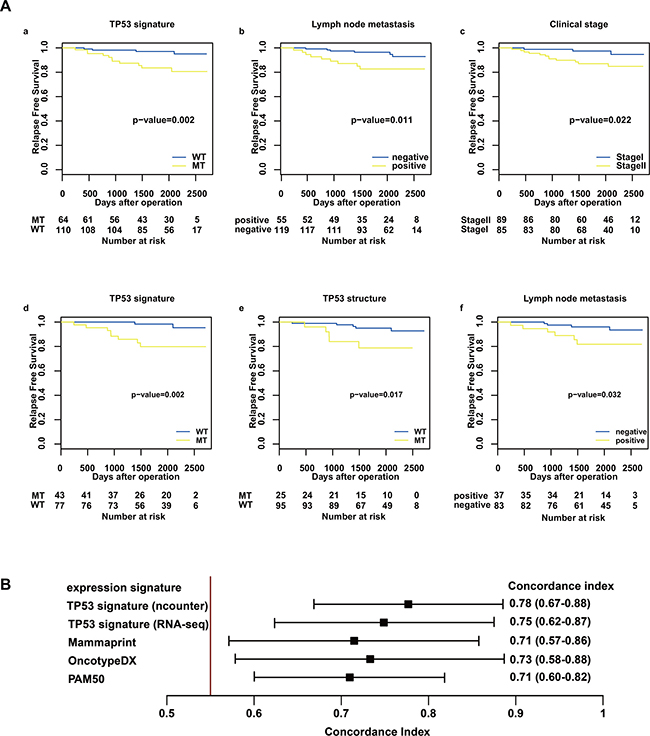 Figure 2: Relapse-free survival analysis in the nCounter validation cohort and concordance index for RFS and risk score. (A) shows RFS after operation stratified by TP53 signature status (a, d), TP53 structural status (e), stage (c), and lymph node status (b, f) using the Kaplan–Meier method. The differences between the curves of the two subgroups were assessed using the log-rank test. The results from the nCounter validation cohort are shown in a, b, and c, and the results from the nCounter and RNA-seq cohort are shown in d, e, and f. (B) shows concordance index for RFS and risk score. Predictive performance for RFS was compared among risk scores of the following gene expression profiles: TP53 signature, OncotypeDX, Mammaprint, and PAM50. The risk score of TP53 signature was calculated using count data from both nCounter and RNA-seq.

Comparison of predictive performance between TP53 signature and other expression profiles 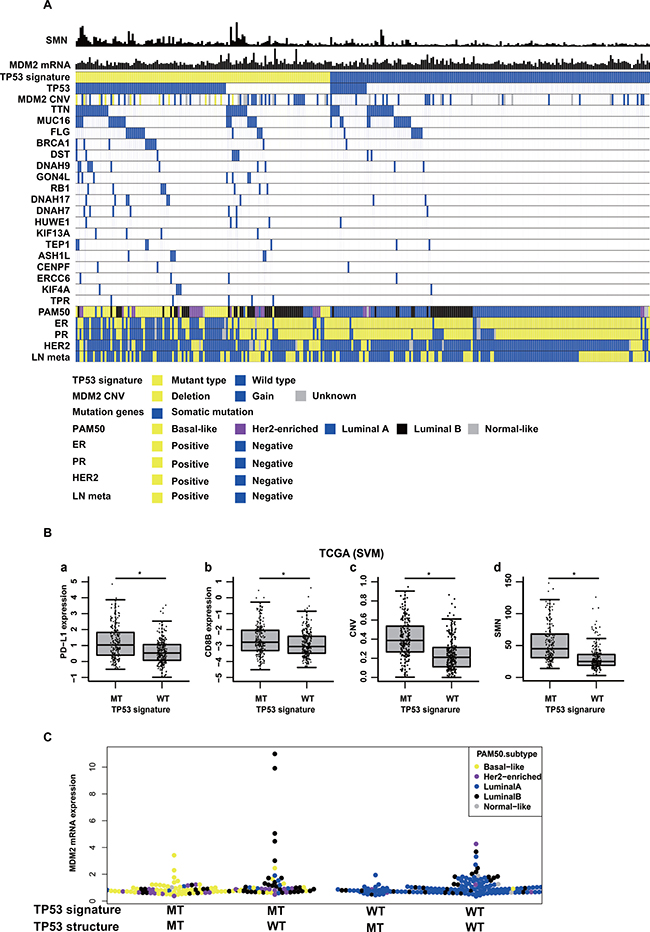 Although somatic mutation call using RNA-seq was still challenging, we investigated whether a result similar to that of the TCGA data analysis would be obtained in analysis of our clinical breast cancer samples. We found that, in fact, similar results were obtained (data not shown).

The presence of high levels of MDM2 in tumor cells decreases their ability to activate p53 [21]. We found that samples with overexpression of MDM2 were diagnosed with TP53 signature MT type, although these samples did not show TP53 structural mutation. This result shows that TP53 signature can evaluate TP53 function comprehensively with or without TP53 structural mutations. Several reports have suggested that not only mutations in the TP53 gene itself but also structural abnormality in other molecules related to the pathway is the mechanism underlying tolerance to DNA-damaging drugs [22–24]. These reports indicate that there is a limit to the efficacy of molecular functional analysis performed only based on structural mutations and a need for comprehensive biological functional analysis. TP53 signature is a new functional assay system that satisfies this requirement.

This study was approved by the Ethics Committee at the Tohoku University Hospital. We analyzed 30 patients’ FFPE samples, a set which we called the “nCounter learning cohort,” to determine the cutoff value for diagnosis of TP53 signature status using nCounter. None of this cohort had received chemotherapy or endocrine therapy preoperatively. The same cohort had been used in our previous microarray-based study [11], and TP53 status had been identified in all samples by means of TP53 DNA-direct sequencing.

A set of thirty-six genes including five internal control genes was used as the TP53 signature gene set for nCounter. Primers for each of these 36 genes were designed. In accordance with the manufacturer’s instructions, we measured the expression values of the 36 genes using nCounter with 200 ng of total RNA extracted from each FF or FFPE sample.

Somatic mutation call using RNA-seq data was performed according to the following two steps. First, the SNP call for RNA-seq data was performed using the Genome Analysis Tool kit (GATK version 3.6). Next, we defined the SNP, of which a few were reported in the database as somatic mutations. In brief, each sequenced read was aligned against the human reference genome (hg19) by STAR2, and duplicate-read removals were performed using Picard (version 2.6.0). Splitting reads in splicing site fields were performed using the SplitNCigarReads program, base quality score recalibration using the BaseRecalibrator program, and variant discovery using the Haplotype caller program. All programs were run according to the GATK tool kit. Annotation information was attached to all variants using ANNOVAR (version 20160201), and variants were filtered using the SNP databases 1000g2015aug_eas and esp6500. We identified the base substitutions, the proportion of which was under 1 percent in both SNP databases; the read count of the base substitutions as somatic mutations was over 20 (DP > 20). To determine TP53 somatic mutations accurately, we checked all samples visually using Integrative Genomics Viewer.

Risk score of TP53 signature was calculated using count data of nCounter or RNA-seq according to the following formula.

The association between the various clinicopathological parameters and TP53 signature status as determined using the nCounter system was evaluated using the chi-square test or the Kruskal–Wallis exact test. RFS rates were calculated according to the Kaplan–Meier method and evaluated by the log-rank test. RFS was defined as the period from the date of operation to the date of recurrence. Univariate and multivariate analysis of various parameters for the prediction of recurrences was conducted using the Cox proportional hazards model. Regardless of the statistical test performed, differences with P < 0.05 were considered statistically significant. In the nCounter RNA-seq common cohort, TP53 structural mutation data was added to clinical factors and TP53 signature status as a predictive factor. All static analysis was conducted using R ver3.25.

Comparison of TP53 signature with other gene expression profiles

All TCGA data was retrieved from cbioportal (http://www.cbioportal.org/study?id=brca_tcga_pub).

GO enrichment analysis was performed using David ver6.7 [43, 44]. In a function annotation chart obtained from DAVID, GO term with p value under 0.1 was considered indicative of a statistically significant difference.

We obtained helpful advice from members of MEXTʼs Promotion Plan for the Platform of Human Resource Development for Cancer project working in graduated school of Juntendo University.

The Joint Research Program of Joint Usage/Research Center at the Institute of Development, Aging and Cancer, Tohoku University. (S.Y, S.K),

Grants-in-Aid from the Ministry of Education, Culture, Sports, Science, and Technology of Japan (S. T),