Background: Liver cancer stem cells (LCSCs) are the key factors for cancer metastasis, recurrent, and drug resistance. LCSCs are originated from either hepatocytes dedifferentiation or differentiation arresting of liver normal stem cells (LNSCs). Differentiation-inducing therapy is a novel strategy in solid tumors. Furthermore, Notch signaling pathway has been proved to play important role in the process of hepatocytes differentiation. In previous study, a malignant transformation cellular model of LNSCs has been built up, and in this study we are trying to illustrate whether inhibition of Notch can reverse this malignant tendency and drive these malignant cells back to differentiate into mature hepatocytes.

Results: Inhibition of Notch signaling pathway can down-regulate the stemness-related cancer markers, lower the proliferative status, alleviate the invasive characteristic, or attenuate the metastasis tendency. What is more, it can help the malignantly transformed cells to regain the mature hepatic function of glucagon synthesis, urea metabolism, albumin production, and indocyanine-green (ICG) clearance.

Materials and Methods: HOX transcript antisense RNA (HOTAIR) expression was enhanced in LNSCs via lentivirus transduction to set up the malignant transformation cellular model. Then, a Notch inhibitor was applied to induce malignantly transformed cells differentiate into mature hepatocytes, and malignant abilities of proliferation, invasiveness, tumorigenesis as well as mature hepatocyte function were observed and compared.

Conclusions: The data demonstrate that the anti-tumor effects of Notch inhibition may lie not only on killing the cancer cells or LCSCs directly, it can also induce the LCSCs differentiation into mature hepatocytes via mesenchymal-epithelial transition (MET) progress or downgrade the malignancy. 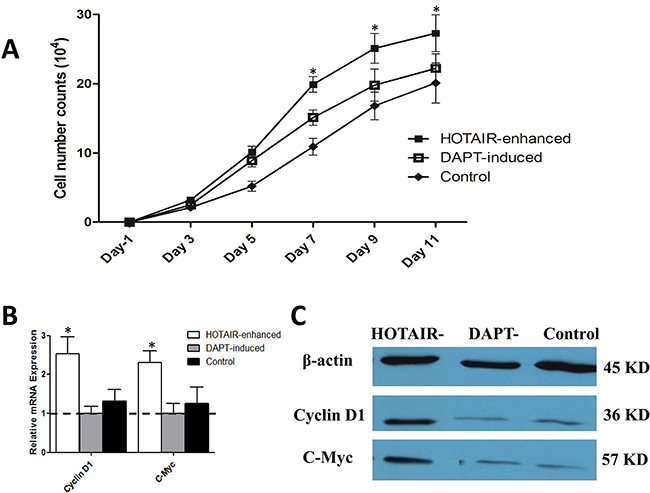 WB results showed that the cellular cycle gene Cyclin D1 and proliferative gene c-Myc, also known as an oncogene, would be downregulated in DAPT-induction or under-expressed in normal cells spontaneously (n = 3, P < 0.05) (Figure 1B and 1C). It indicated that DAPT could lead these uncontrolled cells back to normal proliferative status.

To address the change of cellular invasion and migration, we performed transwell assays and scratch wound healing assays. Similar as the result of a previous study, we found it that HOTAIR-enhance could make the LNSCs gain a higher invasion and migration ability. Although more DAPT-induced cells trespass through the ECM than LNSCs, these trespassed cells were significantly less than that HOTAIR-enhanced group (n = 3, P < 0.05) (Figure 2A). It is demonstrated DAPT-induction could partly neutralize the invasion ability of malignantly transformed cells. However, through the scratch wound healing assays, the gained migration ability of HOTAIR-enhanced cells could be absolutely counteracted by DAPT inducing (n = 3, P < 0.001) (Figure 2B). 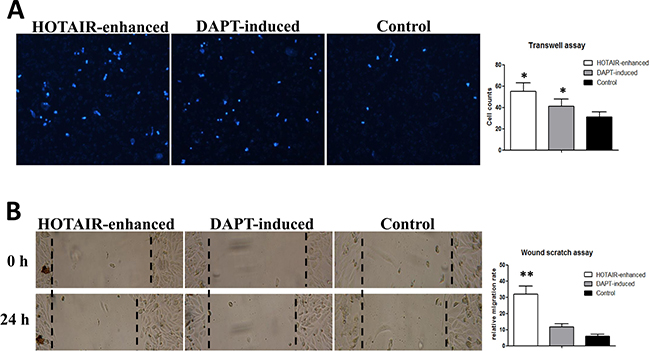 To address whether DAPT-induction promotes malignantly transformed LNSCs differentiation into mature hepatocytes, the excretory, synthetic, and metabolic function were evaluated. ICG was broadly used to evaluate the liver function. Herein, it was found that all three kinds of cells could intake ICG to the cytoplasm (Figure 3A). The difference was that HOTAIR-enhanced cells were able to absolutely eliminate the dye after about 1 hour. Quite differently, DAPT-induction could significantly shorten the elimination time to the level about 30 minutes, which was similar with normal LNSCs (n = 3, P < 0.05) (Figure 3A). 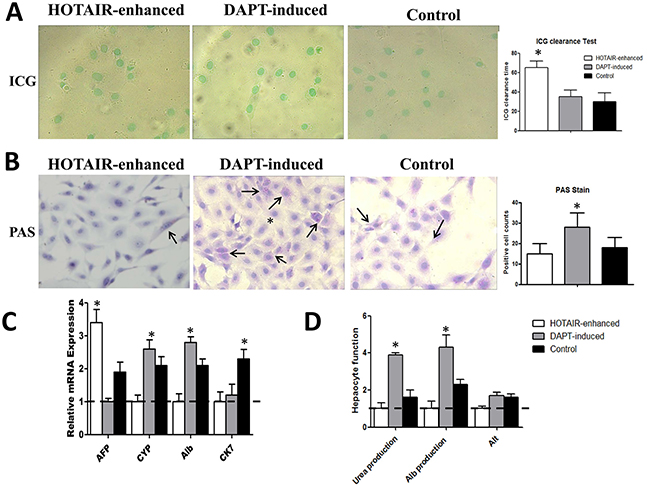 The PAS staining was used to illustrate the change of synthetic function. the number of PAS-positive cells in HOTAIR group was 14/HPF, 29/HPF in DAPT-induction group (n = 10, P < 0.05), and 16/HPF in LNSCs respectively (Figure 3B).

In previous assays, the in vitro tumor characteristic changes of proliferation, invasive, migration, cell markers, and hepatic function were tested. Tumorigenesis in immune-deficient mice was recommended as the ‘‘smoking gun’’ for cancer formation and for evaluation of anti-tumor therapy. To test the tumorigenic ability of cells from each group, equal numbers of cells were injected sub-percutaneously into mice. The results showed that HOTAIR-enhanced cells developed visible tumors on every nude mouse, whereas no visible tumor was observed on the mice which was injected with LNSCs. Meanwhile, the cells handled with DAPT-inducing formed a much smaller tumor than that formed in HOTAIR-enhanced cells (Figure 4A). 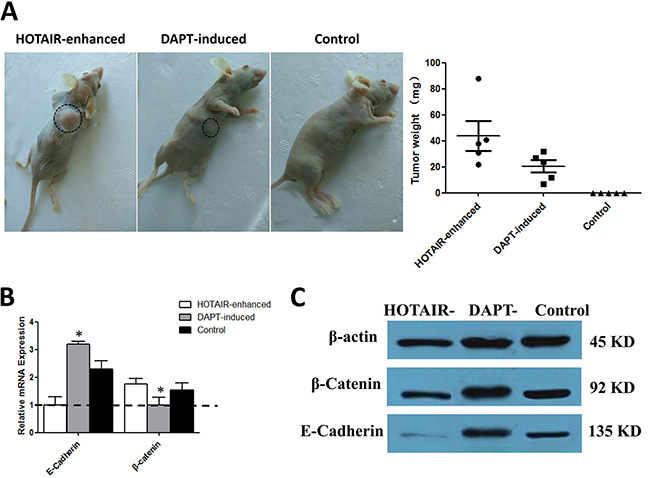 Figure 4: Notch inhibition alleviates the carcinogenesis tendency of malignantly transformed LNSCs via EMT. (A) The results showed that HOTAIR-enhanced cells developed visible tumors on every nude mouse, whereas no visible tumor was observed on the mice which were injected with LNSCs. Meanwhile, the cells handled with DAPT-inducing formed a much smaller tumor than that formed in HOTAIR-enhanced cells. (B, C) The results suggested that the MET markers E-Cadherin expression was up-regulated not only at the mRNA level (3.2-fold higher than baseline, 3.2 ± 0.1, n = 3, P < 0.05) but also at the protein level in DAPT-induced cells. Oppositely, EMT marker β-catenin was up-regulated at both mRNA level (1.8-fold higher than baseline, 1.8 ± 0.3, n = 3, P < 0.05) and protein level in HOTAIR-enhanced cells. The black cycle indicated the neoplastic tumor. The lowest expression sample was set up as baseline.

The molecular mechanism of Notch inhibition in differentiation inducing therapy

Where and how LCSCs derive from is the core problem of HCC therapy. It is believed that LCSCs originate from dedifferentiation of mature hepatocytes or differentiation arrest of liver normal stem cells (LNSCs) with many molecules involved in such as Hippo and Notch signaling pathway. Mu et al. found that AFP-, A6-, and CK19-positive cells within HCCs may be hepatocyte-derived cells that underwent dedifferentiation, and the progenitor signature of HCCs does not reflect progenitor origin, but dedifferentiation of hepatocyte-derived tumor cells [16]. Under specific conditions, hepatocytes present multi-plasticity and dedifferentiate into biliary cells and even immature progenitors. This dedifferentiation ability results in the presentation of an advantage for the tumor [17]. Another finding indicates that loss of Hippo-pathway signaling and upregulation of YAP drive the mature hepatocytes to dedifferentiate into progenitor characteristics [18]; what is more, transgenic mice with YAP enhanced results in increased hepatocyte dedifferentiation, cell migration, EMT, and malignant transformation of LNSCs [19]. It is of great interest that the dedifferentiation of HCCs may predict a worse prognosis [20]. Meanwhile, a quite different idea believes that LCSCs arise out of differentiation and/or maturation arrest of LNSCs [21]. Chiba et al. transferred Bmi1 and Wnt/beta-catenin into c-Kit(-)CD29(+)CD49f(+/low)CD45(-) Ter-119(–) hepatic stem/progenitor cells and these cells finally initiate hepatic tumors [22]. With P53 gene deleted in LNSCs, Suzuki et al. suggested that these transgenic cells can result in the formation of liver tumors [23]. In our previous study, suppressing the anti-oncogene Tg737 and miRNA-200a, or enhanced oncogene miRNA-10b and HOTAIR could lead LNSCs to malignant transformation by promoting the cell-cycle progressing and differentiation arrest respectively [24–26].

Although differentiation-inducing therapy will not kill the HCCs or LCSCs directly, it can down-regulate the stemness-related cancer markers, lower the proliferative status, alleviate the invasive characteristic, or attenuate the metastasis tendency. Previous studies focus on the fact that differentiation therapy can down-regulate cancer markers, while the fact that the hepatic function recover after differentiation therapy is the more important. In this study, we lay our emphasis not only on the cancer markers, but also on the recovery of the hepatocyte function. On cancer characteristic, inhibition Notch could decrease the proliferation through downregulation of oncogene c-Myc and Cyclin D1. It can reverse the invasive status, terminate metastasis tendency, and decrease tumorigenesis ability. More meaningfully, it will help the malignantly transformed cells to regain the mature hepatic function of glucagon synthesis and ICG elimination. Clearance of ICG is an important factor to evaluate the hepatic function. Additionally, ICG was found highly loaded at tumor tissue, and helped to identify the margin of the tumor [34]. Because the HCCs are not able to eliminate the ICG, it will accumulate in the tumor tissue; what is more, the accumulation of ICG is correlated with the differentiation status of HCCs [29, 30]. Well-differentiated HCCs show light and uniform fluorescence of ICG in the cancerous tissue, while poorly differentiated HCCs show strong and rim-type fluorescence around the tumor [35]. Our results demonstrated that Notch inhibition was able to accelerate the clearance speed of ICG in malignantly transformed cells due to the promotion of the differentiation status. It is a sign for both LNSCs differentiation into mature hepatocytes and LCSCs response to differentiation-inducing therapy. 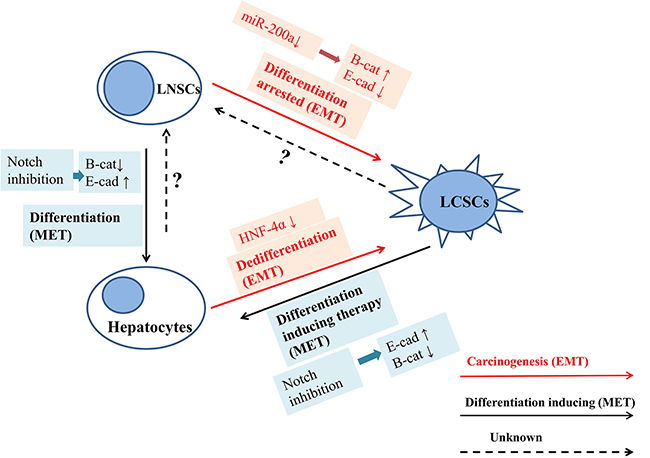 The isolation and purification of LNSCs were performed as described previously [46]. The cells were grouped according to the transfection conditions as follows: HOTAIR enhanced group and HOTAIR enhanced plus Notch inhibition group (DAPT group, with a DAPT concentration of 1 μM). The cells in negative control group were treated with dimethyl sulfoxide (DMSO) (control group). Cells in each group were cultured in Williams’ E medium (Sigma, USA) with 15% (v/v) fetal bovine serum (Invitrogen, USA). The cells were incubated under 5% (v/v) CO2 at 37°C.

In HOTAIR enhanced group, pCDNA/HOTAIR was transfected into LNSCs using Lipofectamine 2000 according to the manufacturer’s instructions.

The cellular proliferative ability from each group was determined through the 3-(4,5-dimethylthiazol-2-yl)-2,5-diphenyltetrazolium bromide (MTT) assay. The cells from each group were cultured in 96-well plates at a concentration of 5 × 103 cells/well. Sterile PBS including 20 μl MTT (final concentration of 5 mg/ml) (Sigma, USA) was added to each well and incubated at room temperature for 4 h, and a continuous detection were made at 1, 3, 5, 7, 9, and 11 days of culture. To fully dissolve the crystal, 150 μl DMSO (Invitrogen, USA) was added into each well. The optical density was measured at a wavelength of 490 nm with a Bio-Rad 680 microplate reader (Bio-Rad, USA).

A total cellular number of 5 × 103 in 500 μl of serum-free Williams’E medium from each group were seeded into an 8-μm pore-size polycarbonate membrane Boyden chamber, which was inserted into a transwell apparatus (Costar, MA, USA). Additional 500 μl Williams’ E medium containing higher FBS (15%) was added into the lower layer of 24-well plate. After incubated at 37°C for a day, the trespassed cells were fixed in 95% ethanol for 5 min, stained with DAPI (1 μg/mL), rinsed in PBS for 3 × 5 mins, and observed via fluorescence microscopy (Olympus, Japan).

A total number of 5 × 103 cells from each group were added into 6-well plate and incubated overnight in FBS free medium. Pipette tips were used to make wounds on the attached growing cells. The wound healing procedure was observed for 24 h, and dead cells were gently washed off before photographs were taken.

RNA was harvested using Trizol (Invitrogen, USA), according to the manufacturer’s instructions. The cDNA synthetization was performed as Primescript RT reagent Kit (TAKARA, China). The specific primers were exhibited in Table 1. PCR reactions were performed as following: template denaturation at 95°C for 1 min, primer annealing at 60°C for 1 min, primer extension at 72°C for 2 min (35 cycles), and 72°C for 10 min as an extra cycle of elongation.

The cells were pyrolysis in RIPA buffer containing protease inhibitors. The lysates were centrifuged at 10,000 rpm for 10 min at 4°C. After centrifuge, the supernatant were collected. Total of 50 µg protein was uploaded to sodium dodecyl sulfate polyacrylamide gel electrophoresis and blotted onto a PVDF membrane. The membrane was blocked using 5% fat-free milk at room temperature for 2 h. The concentration of antibody for incubated is as following: anti-E-cadherin (1:200), anti-Cyclin D1 (1:1,000), anti-C-Myc (1:1,000), anti-β-catenin (1:500), anti-β-actin (1:1,000) (Sigma, USA) at 4°C for overnight. After three washes for 5-min in TBST, the membrane was incubated in peroxidase-conjugated goat anti-mouse/rabbit IgG or peroxidase-conjugated rabbit anti-goat IgG (Abcam, US) for 2 h at room temperature. An electrogenerated chemiluminescence system was used to visualize the proteins.

About 5 × 107 cells from each group were subcutaneously injected into the nude mice on the back separately. All mice were sacrificed 60 days after injection, and the weight of the tumor was detected.

This work was granted by the Chinese National Natural Science Foundation (grant no. 81502696 and grant no. 81302168). We thank JiongRan Medical Art Studio for the image processing and schematic picture.