It is well established that the induction dose of anesthetics is influenced by age [1-3]. This age-related phenomenon has been observed in animals and humans in previous studies. Earlier works demonstrated that the dose requirement for induction with propofol was higher in infants and children than in adults in clinical practice [1, 2], and these differences were substantial during the important developmental stages from infants to children [2]. A study from 1980 also reported that adult pigtail monkeys were significantly more sensitive to the hypnotic effects of ketamine than neonatal and young pigtail monkeys [4]. Since millions of infants and children undergo anesthesia around the world every year, an accurate understanding of these age-related differences is very important for clinical practice and basic research.

It is now clear that HCN channels are involved in the hypnotic effects of intravenous anesthetics [9-15]. Previous studies have demonstrated that general anesthetics, such as propofol and ketamine, produce anesthetic activities through the inhibition of HCN channels and that HCN1 knockout mice are significantly less sensitive to these anesthetics [9, 10, 15].

HCN (1-4) channels are the products of a 4-member hyperpolarization-activated cationic gene family [5, 10, 16]. Among HCN channel subtypes, the HCN1 subtype is strongly expressed in the cerebral cortex and regulates the excitability of cortical neurons [9, 10, 15], which is a feature of general anesthetic-induced hypnosis [15, 16]. Previous works have demonstrated that cortical excitability is principally controlled by HCN1 channels in the layer 5 pyramidal neurons [17-19] and that an age-related increase in HCN1 channels enhanced these actions [17]. Recent studies indicated that the expression of HCN1 channels and the HCN current showed nearly 2-fold changes in the neocortical dendritic tree of layer 5 pyramidal neurons during the first postnatal month in mice [17-20]. Thus, we postulated that HCN channels contribute to higher sensitivity to intravenous anesthetics with increasing age.

In the present study, we combined behavioral measurement, molecular biological methods, high-performance chromatography and whole-cell recording to identify the relationship between the expression level of HCN channels and sensitivity to anesthetics in mice. 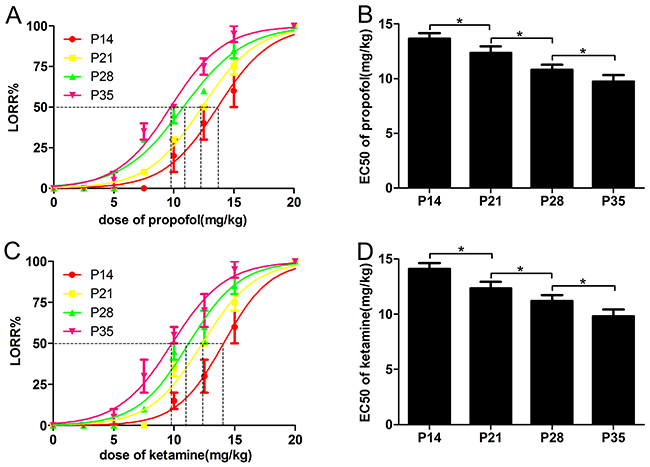 With increasing age, decreased CSF concentrations of propofol and ketamine are required to produce the same anesthetic actions 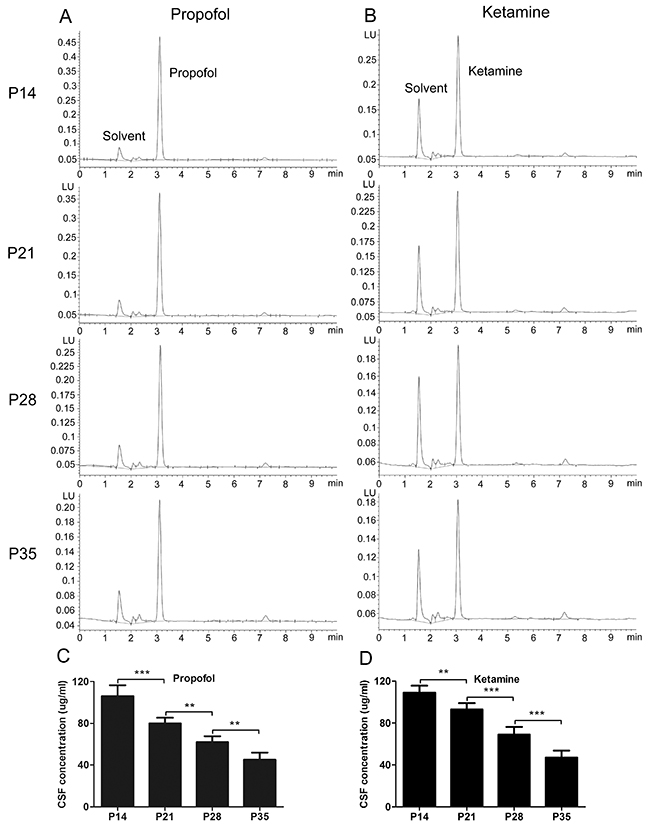 There are four different HCN subunits expressed to some degree in the mammalian central nervous system (CNS) [24, 25]. Among these subunits, HCN1 channels are strongly inhibited by anesthetics [9-11]. We examined the expression of HCN1 channels in the mouse cortex and observed that the expression increased dramatically by approximately 92% from P14 to P35 (Figure 3A and 3B, n=5, F=139.4, P<0.001 using one-way ANOVA). 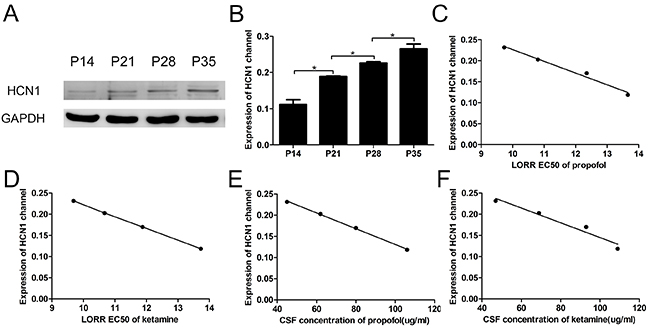 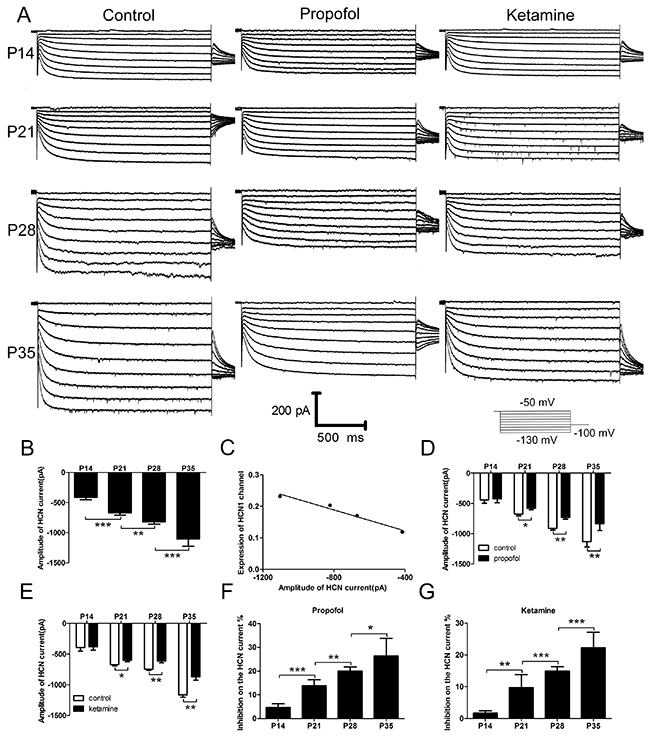 As described in previous studies, the induction dose of intravenous anesthetics in both patients and animals is influenced by age, with young animals and patients showing reduced sensitivity to anesthetics [2, 3]. In the present study, LORR analysis was performed to ascertain different responses to intravenous anesthetics in mice during different developmental periods. The results indicated that the sensitivity to the hypnotic actions of propofol and ketamine increased with the development of mice, consistent with previous studies [1-3]. A study also reported the sex differences in sodium pentobarbital maintaining anesthesia, which induced by isoflurane in rats, and ascribed the lean body mass and metabolism differences between male and female rats to the sex differences in anesthesia of sodium pentobarbital [22]. However, as our knowledge, there was no direct evidence referred to the sex differences in propofol- or ketamine- induced anesthesia in young mice. In addition, we analyzed the present data and found that there was no difference in LORR EC50 of propofol and ketamine in young male and female mice.

Some limitations of the present study should be discussed. First, we validated our hypothesis only by pharmacological methods, the use of HCN knockout mice would be better way examine this hypothesis, which would be our further work. Second, we only examined the relationship between the sensitivity to propofol and ketamine and HCN channels; other anesthetics and ion channel or receptor other than HCN channels should be examined to further generalize the conclusions drawn herein. Third, we only investigated the effects of propofol and ketamine on the cortical pyramidal neurons; other brain regions such as thalamus should be evaluated in future study.

Analysis of anesthetic action in mice

Bolus injections of propofol (Fresenius Kabi AB, Germany, 2.5-20 mg/kg) and ketamine (Hengrui company, Jiangsu, China, 2.5-20 mg/kg) were injected via the tail vain of each mouse (P14 to P35) as previous study described [30]. Concentrations of propofol and ketamine were diluted to 4 levels (20 μg/μl, 10 μg/μl, 5 μg/μl, 2.5 μg/μl) in order to ensure the volume of drugs are similar in different mice and exclude the effects of drugs volume on the hypnotic action of propofol and ketamine. Mice were placed in a flexible plexiglass restrain chamber and exposed the tail outside the chamber. To dilate the tail vain, moderate hot water (40°C) was used to heat the tail for 1 minute and avoid scalded. Then the tail was fixed by left hand and drug injected with right hand by a 32G insulin syringe (0.23mm × 4mm, BD Becton, Dickinson and Company, USA). Mice with failed injection were excluded. Each animal was administered a single dose of the drug on any given day and the time for administration was at 8 to 12 o’clock in the morning. Some animals received multiple concentrations (on different days, separated by at least 5 days), but no single animal contributed more than one data point for any given concentration.

Hypnosis was established as a loss-of-righting reflex (LORR) and a scale of righting reflex. We defined mice rapid forceful righting within 10 s and when placed on side as a negative LORR while no righting attempts within 10 s after completion of the injection and that persisted for at least10 s thereafter as a positive LORR [9, 10, 21].

Cerebrospinal fluid (CSF) concentrations of propofol and ketamine in mice (P14 to P35) were determined using a slightly modified version of a previously described high-performance liquid chromatography (HPLC) method [3, 31, 32]. Mice sacrificed for cerebrospinal fluid (5 μl from foramina magnum) extraction after the injection of propofol and ketamine via the tail vein using a dose of LORR EC50 from the behavioral tests. One hundred microliters of acetonitrile were added to 5 μl CSF. After mixing for 1 min, the mixture was centrifuged at 2000g for 10 min at 15°C. Then, 25 μl of the supernatant was injected into the column.

All statistical analyses were performed using GraphPad prism 5.0 (GraphPad Software, San Diego, CA). The results are presented as the means ± SEM. Data were statistically analyzed using one-way analysis of variance (ANOVA). The effects of propofol and ketamine on HCN current were analyzed using two-way ANOVA. Dose-response data were fitted and statistically analyzed using Prism5.0 with a logistic equation with two parameters (slope and EC50) and affixed origin. Logistic regression was used to evaluate the correlation between the expression of HCN1 channels and HCN currents, and the CSF concentrations of propofol or ketamine. Differences in mean values were considered significant at P<0.05.

3. Larsson JE, Wahlström G. The influence of age and administration rate on the brain sensitivity to propofol in rats. Acta Anaesthesiol Scand. 1998; 42:987–94.