Background: Interferon-free treatment can achieve higher sustained virological response (SVR) rates, even in patients in whom hepatitis C virus (HCV) could not be eradicated in the interferon treatment era. Immune restoration in the liver is occasionally associated with HCV infection. We examined the safety and effects of interferon-free regimens on HCV patients with autoimmune liver diseases.

Methods: Total 12 patients with HCV and autoimmune liver diseases [7 AIH and PBC], who were treated with interferon-free regimens, were retrospectively analyzed.

Hepatitis C virus (HCV) causes chronic and persistent infection and is an important etiologic factor of advanced fibrosis/cirrhosis and hepatocellular carcinoma (HCC) [1]. Eradication of HCV could reduce the risk of the occurrence of HCC and liver-related deaths as well as liver-unrelated deaths, although it is difficult to eliminate HCV [2]. Interferon-free treatment can achieve higher sustained virological response (SVR) rates, even in patients in whom HCV could not be eradicated in the interferon treatment era [3].

Patients with autoimmune liver diseases and hepatitis C virus (HCV) infection are occasionally observed [8, 9]. Patients with autoimmune hepatitis (AIH) and HCV infection often have advanced liver diseases at initial clinical and histological assessments [8]. PBC diagnosis in HCV patients is difficult and usually delayed [9]. Those with HCV and PBC do not have better outcomes than those with only HCV [9].

Immune restoration in the liver is occasionally associated with HCV infection [10, 11]. Studies using interferon-free regimens demonstrated an immune restoration of immunologic responses after HCV clearance [12–14]. Thus, HCV clearance has effects on the human immunologic response. HCV patients with autoimmune liver diseases could not be treated by interferon-including regimens because such regimens were contraindicated in these patients in the interferon era [15]. In the present study, we retrospectively examined the safety and effects of interferon-free regimens on HCV-patients with autoimmune liver diseases.

Figure 1: Serum HCV RNA levels (LIU/mL) during and after interferon-free treatment in the present study. EOT, end of the treatment response. 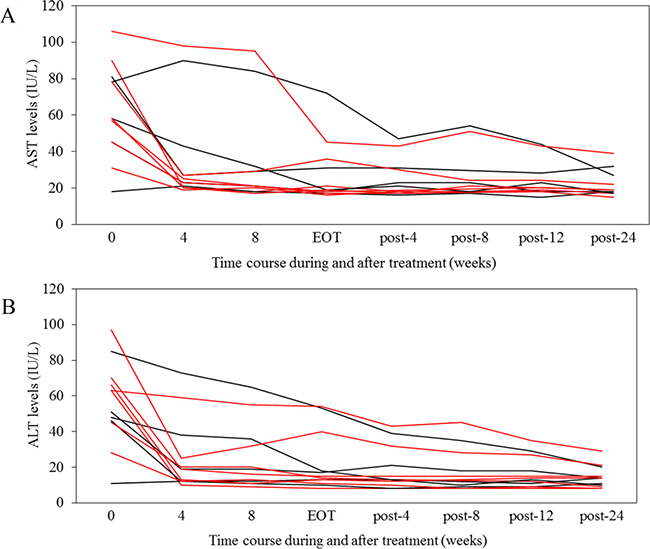 In a female HCV GT-1-patient with AIH and cirrhosis (no. 9), PSL was not administered at baseline, but she needed to take 40 mg/day PSL at week 8 for liver dysfunction after HCV treatment. She complained of back pain and was diagnosed with vasospastic angina by coronary angiography at 11 weeks but completed her treatment (Figure 3).

Before treatment, in 5 HCV patients with PBC, 4 and 4 patients had abnormal AST and ALT (more than 40 IU/L), respectively. At week 24 post-treatment, in all 5 of these patients, both AST and ALT were normalized.

Case presentation of a HCVGT-1 patient with AIH (no. 9)

Concerning safety, in one patient with AIH, PSL was needed for liver dysfunction during the treatment of SOF/LDV. If liver dysfunction is due to autoimmune liver diseases, it may be important to treat autoimmune liver diseases before or during interferon-free treatment for HCV. Unexpectedly, in this case, vasospastic angina also developed as a complication during the treatment of SOF/LDV. Recently, Nirei et al. [16] reported ventricular tachycardia as a complication of SOF/LDV treatment. We do not know the association between the use of SOF/LDV and vasospastic angina.

Vento et al. [10] reported two patients with HCV who developed fulminant liver failure after stopping chemotherapy, indicating an immune-mediated mechanism for hepatocyte damage in HCV infection. These patients with liver failure seem to have developed immune restoration in the liver after stopping chemotherapy. HCV-positive mothers with increased ALT in the post-partum period, also presented a significant decrease in serum HCV RNA in the post-delivery period, and this event was concomitant with an increase in Th1 cytokine levels [11].

In the present study, one patients with AIH (no. 12) was classified into the AIH type 2, which is positive for anti-liver/kidney microsome type 1 (anti-LKM1) antibody. It has been reported that anti-LKM-1 was occasionally positive in patients with chronic active hepatitis C [17]. Further studies about the effects of DAAs on this type AIH will be needed.

The interferon-free regimens were relatively safe and effective for HCV-infected patients with autoimmune liver diseases. Some patients with active AIH may require immune therapy before HCV treatment. Close monitoring and careful attention are needed to handle unexpected adverse events.

A total of 467 HCV-infected patients, some of whom were described previously [23–25], started treatment with interferon-free treatment by 2016 at the Department of Gastroenterology, Chiba University Hospital. Among them, 12 patients with autoimmune liver diseases (7 AIH and 5 PBC) were analyzed [25% male, mean age 68±8.4 years, 92% treatment-naive, 75% GT-1b, 33% cirrhosis] (Table 1). This retrospective study was approved by Ethics Committee of Chiba University School of Medicine (numbers 1462 and 1753). Participants in the study were recruited from Chiba University Hospital. This study was conducted in accordance with the Declaration of Helsinki.

Diagnosis of AIH and PBC

In total, 9 HCV GT-1b patients were included: 7, 1 and 1 were treated with sofosbuvir/ledipasvir (SOF/LDV) for 12 weeks, ombitasvir/paritaprevir/ritonavir (OBV/PTV/r) for 12 weeks and daclatasvir/asunaprevir (DCV/ASV) for 24 weeks, respectively. All 3 HCV GT-2 patients were treated with SOF/ribavirin (RBV) for 12 weeks (Table 1). Before the use of OBV/PTV/r or DCV/ASV, HCV NS5A resistance associated variants (RAVs) were excluded as described previously [23].

Laboratory tests were measured by standard laboratory techniques at a central laboratory in Chiba University Hospital. Blood samples were obtained at the baseline, at weeks 4, 8 and 12 of treatment, and then 4, 8, 12 and 24 weeks after the end of treatment [24].

HCV RNA was measured by COBAS TaqMan HCV assay version 2.0 (Roche Diagnostics, Tokyo, Japan), with a lower limit of quantification of 15 IU/mL. We used the definition of rapid virological response (RVR), consisting of HCV RNA <15 IU/mL at week 4 according to the 2014 EASL guidelines. SVR was defined as negativity of HCV RNA at 24 weeks after stopping treatment. HCV genotyping was performed as previously described [24].

We thank Dr. Makoto Arai, Prof. Osamu Yokosuka and all other medical staffs for patients’ care.

Tatsuo Kanda received research grants from AbbVie, MSD, Sysmex and Chugai Pharmaceutical. Naoya Kato received grants from AbbVie, MSD, Sysmex, Chugai Pharmaceutical, Gilead Sciences and BMS. The founding sponsors played no role in the study design, data collection, analyses, or interpretation, writing of the manuscript, or in the decision to publish the results. The other authors have declared no conflicts of interest.

This work was partially supported by grants from the Japan Agency for Medical Research and Development (AMED).