An excessive requirement for methionine (MET) for growth, termed MET dependence, appears to be a general metabolic defect in cancer. We have previously shown that cancer-cell growth can be selectively arrested by MET restriction such as with recombinant methioninase (rMETase). In the present study, we utilized patient-derived orthotopic xenograft (PDOX) nude mouse models with pancreatic cancer or melanoma to determine the relationship between intra-tumor MET level and tumor size. After the tumors grew to 100 mm3, the PDOX nude mice were divided into two groups: untreated control and treated with rMETase (100 units, i.p., 14 consecutive days). On day 14 from initiation of treatment, intra-tumor MET levels were measured and found to highly correlate with tumor volume, both in the pancreatic cancer PDOX (p<0.0001, R2=0.89016) and melanoma PDOX (p<0.0001, R2=0.88114). Tumors with low concentration of MET were smaller. The present results demonstrates that patient tumors are highly dependent on MET for growth and that rMETase effectively lowers tumor MET.

Cancer cells have an elevated requirement for methionine (MET) compared to normal cells. This phenomena is termed MET dependence [1]. MET restriction arrests tumor growth and induces a selective S/G2-phase cell-cycle arrest of cancer cells in vitro and in vivo [2–5].

MET dependence appears to be due to excess use of MET for aberrant transmethylation reactions, termed the Hoffman effect [6–11], analogous to the Warburg effect for glucose in cancer [12]. The excessive and aberrant use of MET in cancer is observed in [11C] MET PET imaging, where high uptake of [11C] MET results in a very strong and selective tumor signal compared with normal tissue background. [11C] MET is superior to [18C] fluorodeoxyglucose (FDG)- PET for PET imaging, suggesting MET dependence is more tumor-specific than glucose dependence [13–15].

A purified MET cleaving enzyme, methioninase (METase), from Pseudomonas putida has been found previously to be an effective antitumor agent in vitro as well as in vivo [16–19]. For the large-scale production of METase, the gene from P. putida has been cloned in Escherichia coli and a purification protocol for recombinant METase (rMETase) has been established with high purity and low endotoxin [20–25].

We previously reported on the efficacy of rMETase against a BRAF-V600E mutant melanoma patient-derived orthotopic xenograft (PDOX) nude mouse model and that rMETase sensitized the melanoma PDOX to temozolomide (TEM) [26].

In the present study, we used PDOX nude mouse models with pancreatic cancer and melanoma to demonstrate the relationship between intra-tumor MET level and tumor size, using rMETase to lower tumor MET.

Intra-tumor MET levels highly correlated with tumor volume in both the pancreatic cancer (p<0.0001, R2=0.89016) (Figure 1) and melanoma PDOX models (p<0.0001, R2=0.88114) (Figure 2). Tumors with low concentration of MET were smaller in size. Tumors treated with rMETase had lower concentration of MET and were smaller in size than untreated tumors (Table 1). 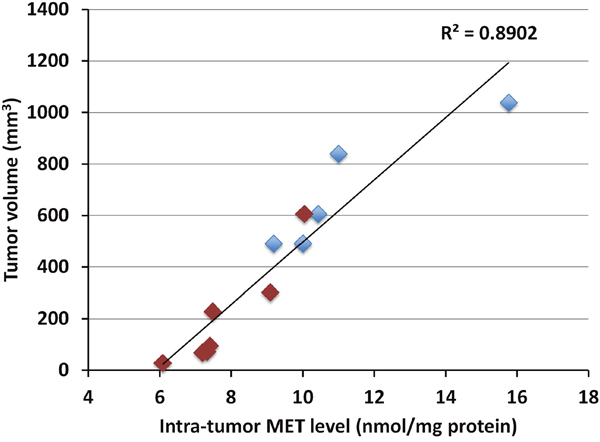 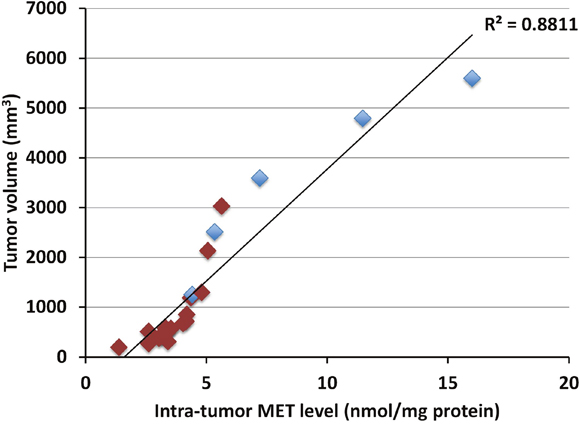 The present study shows a direct relationship between the intra-tumor MET level and tumor size using PDOX models of pancreatic cancer and melanoma, further demonstrating the MET dependence of cancer, in this case, using patient tumors.

The excessive requirement for MET termed MET dependence appears to be a general metabolic defect in cancer. Sugimura et al. showed that rat tumor growth was slowed by giving the rats a defined diet depleted in MET [27]. It was observed that L5178Y mouse leukemia cells in culture required very high levels of MET to proliferate [28]. Subsequently, most cancer cell lines were found to be MET dependent [29, 30]. These cell lines were derived from multiple cancer types including liver, ovarian, submaxillary, brain, lung, bladder, prostate, breast, kidney, cervical, colon, fibrosarcoma, osteosarcoma, rhabdomyosarcoma, leiomyosarcoma, neuroblastoma, glioblastoma, pancreatic and melanoma. The occurrence of MET dependence among these diverse cancer types suggests that methionine dependence is a general phenomenon in cancer. The present results further substantiate this assumption.

Human patient tumors, including tumors of the colon, breast, ovary, prostate, and melanoma, were previously found to be MET dependent in Gelfoam® histoculture [31]. Mouse models of human cell lines were previously shown to be inhibited by rMETase [32–34].

PDOX models of Ewing’s sarcoma [35] and melanoma [26] were also shown to be MET dependent and inhibited by rMETase.

This is the first report that intra-tumor MET levels highly correlated with tumor volume. These results demonstrate that MET restriction, using rMETase, has promising clinical potential.

Previously-developed concepts and strategies of highly-selective tumor targeting can take advantage of molecular targeting of tumors, including tissue-selective therapy which focuses on unique differences between normal and tumor tissues [36–41].

Athymic nu/nu nude mice (AntiCancer Inc., San Diego, CA), 4–6 weeks old, were used in this study. Mice were housed in a barrier facility on a high efficacy particulate arrestance (HEPA)-filtered rack under standard conditions of 12-hour light/dark cycles. The animals were fed an autoclaved laboratory rodent diet. All animal studies were conducted in accordance with the principles and procedures outlined in the National Institutes of Health Guide for the Care and Use of Animals under Assurance Number A3873-1. All mouse surgical procedures and imaging were performed with the animals anesthetized by subcutaneous injection of a ketamine mixture (0.02 ml solution of 20 mg/kg ketamine, 15.2 mg/kg xylazine, and 0.48 mg/kg acepromazine maleate). The response of animals during surgery was monitored to ensure adequate depth of anesthesia. The animals were observed on a daily basis and humanely sacrificed by CO2 inhalation if they met the following humane-endpoint criteria: severe tumor burden (more than 20 mm in diameter), prostration, significant body weight loss, difficulty breathing, rotational motion and body temperature drop [26].

The pancreatic tumor was established in nude mice at the MD Anderson Cancer Center under IRB approval and written informed patient consent [42–49].

For the pancreatic cancer PDOX, tumor fragments (5 mm3) were initially implanted subcutaneously in nude mice. After five weeks, the subcutaneously-implanted tumors grew to more than 10 mm in diameter. The subcutaneously-grown tumors were then harvested and cut into small fragments (3 mm3). After nude mice were anesthetized with the ketamine solution described above, a 1-2 cm skin incision was made on the left side abdomen through the skin, fascia and peritoneum and pancreas was exposed. Surgical sutures (8-0 nylon) were used to implant tumor fragments onto the tail of pancreas to establish the PDOX model. The wound was closed with a 6-0 nylon suture (Ethilon, Ethicon, Inc., NJ, USA) [50, 51].

The melanoma patient PDOX was previously established from a patient diagnosed with a melanoma of the right chest wall under UCLA IRB approval and written informed patient consent [26, 52–55].

After subcutaneously-implanted tumors grew to more than 10 mm in diameter, the subcutaneously-grown tumors were then harvested and cut into small fragments (3 mm3). After nude mice were anesthetized with the ketamine solution described above, a 5-mm skin incision was made on the right chest into the chest wall in order to match the patient, which was split to make space for the melanoma tissue fragment. A single tumor fragment was implanted orthotopically into the space to establish the PDOX model. The wound was closed with a 6-0 nylon suture (Ethilon, Ethicon, Inc., NJ, USA) [26, 52–55].

JMP version 11.0 was used for analysis of variance (ANOVA). A probability value of P ≤ 0.05 was considered statistically significant.

Currently melanoma [56–59] and pancreatic cancer [60, 61] are recalcitrant diseases with no reliable therapy. The results of the present study indicate that rMETase has general clinical potential to improve the outcome for both diseases as non-BRAF-V600E melanoma is also sensitive to rMETase [62].

56. Slominski AT, Carlson JA. Melanoma resistance: a bright future for academicians and a challenge for patient advocates. Mayo Clin Proc. 2014; 89:429-433.