We evaluated the benefit of tailoring treatments for a colorectal adenocarcinoma cancer cohort according to tumor molecular profiles, by analyzing data collected on patient responses to treatments that were guided by a tumor profiling technology from Caris Life Sciences. DNA sequencing and immunohistochemistry were the main tests that predictions were based upon, but also fragment analysis, and in situ hybridization. The status of the IHC biomarker for the thymidylate synthase receptor was a good indicator for future survival. Data collected for the clinical treatments of 95 colorectal adenocarcinoma patients was retrospectively divided into two groups: the first group was given drugs that always matched recommended treatments as suggested by the tumor molecular profiling service; the second group received at least one drug after profiling that was predicted to lack benefit. In the matched treatment group, 19% of patients were deceased at the end of monitoring compared to 49% in the unmatched group, indicating a benefit in mortality by tumor molecular profiling colorectal adenocarcinoma patients.

Colorectal cancer (CRC) is the third most prevalent cancer globally. Over a million cases are diagnosed each year and there are almost 700,000 deaths due to it annually [1–3]. It occurs more in developed countries [4, 5], with the highest rates in Australia, New Zealand, Europe and the USA.

CRC risk is strongly related to age and sex, and is most common in men and older people. Only a small proportion of colorectal cancers are thought to be due to inherited genetic abnormalities, while lifestyle factors such as diet, obesity, smoking, and lack of physical activity are much more influential. In about 20% of all cases there is a family history of colon cancer, and around 4% are due to the inherited genetic disorders familial adenomatous polyposis (FAP) and hereditary non-polyposis colon cancer (HNPCC) [4].

The acquisition of somatic mutations in oncogenes such as KRAS, RAF, and PI3K are often seen in colon cancer. Upregulation of the WNT and TGF-β signaling pathways results in increased activity of MYC, an important effector of colorectal cancer [6]. However, epigenetic changes are more frequent in colon cancer than mutations in genes; often a colon tumor has only one or two oncogene driver mutations, one to five tumor suppressor driver mutations, with around sixty passenger mutations, while there are hundreds of epigenetic changes. CpG island methylation of the DNA sequences encoding miR-34b/c, miR-124a, miR-137 and miR-342 resulting in their reduced expression can affect expression of hundreds of target genes in each case and are associated with colorectal cancer [7, 8, 9]. Hypermethylation or hypomethylation of CpG islands and changes in histones and chromosomal architecture are other (epigenetic) changes that can cause colorectal cancers. The development of clinical sequencing has enabled pre-treatment sequencing of relevant MAPK pathway genes such as KRAS, BRAF and MEK1, that predict response to EGFR targeted therapies such as cetuximab and panitumumab [10].

Guiding treatments using characterization of tumor biomarkers such as immunohistochemistry and genomic sequencing across many cancer types has resulted in better outcomes [11, 12]. We looked at the efficacy of one such method (outside the context of clinical KRAS and BRAF sequencing) from Caris Life Sciences, for colorectal adenocarcinomas. The effect of this profiling approach on overall survival and drug use was assessed.

Data describing advanced colorectal adenocarcinoma patients who underwent treatment was divided into two groups depending upon if treatments matched recommendations that used tumor molecular profiles. In the matched group, 42 patients received at least one recommended drug subsequent to collection for profiling and none that were not. In the unmatched group 53 patients all received one or more drugs predicted by profiling to lack benefit after sample collection. Patients and their tumors are summarized in Table 1.

Table 1: Matched and unmatched groups compared against all patients

Waterfall plots showing drugs received and survival for both treatment groups are shown in Figure 1. The clinical information for the 42 matched and 53 unmatched patients are depicted as columns (on the left and right of the figure respectively), where green shows administration of drugs expected to be of benefit, red is drugs that lack benefit, and yellow is both of these types in combination.

Figure 1: Summary of drug treatments and outcomes. Treatment schedules are shown in ascending post-profiling survival time for 42 matched (on the left, darker gray background) and 53 unmatched patients (on the right, lighter gray background). A black line at the top of a bar shows that the patient was deceased. Dark gray within a bar is time monitored to either death or last follow-up. Green is time on a drug of benefit. Red is a lack of benefit treatment. Yellow is a combination therapy composed of both benefit and lack of benefit drugs. Blue is a neutral therapy (neither benefit nor lack of benefit).

The drugs that were given are shown in Table 2. The number of patients that received a particular drug is shown in the first column, and the number of continuous treatment periods of a drug is shown in all other columns, i.e. treatments of the same patient with an intervening time are counted separately. The drugs given to the most number of patients were fluorouracil (87 patients), oxaliplatin (81), leucovorin calcium (77), bevacizumab (52) and irinotecan hydrochloride (47).

Table 2: Most common drugs given more than once, and those that were profiled to be of benefit, of no benefit, or classed as neither of these

Some of the drugs did not have a recommendation, and this neither category constituted 47% of treatments in the matched group and 44% in the unmatched cohort. Of this type, leucovorin calcium was given most often - 120 times, which was 19% of all treatments.

Fluorouracil was given far more often when it was profiled to be of benefit - 115 times that it was given coincided with beneficial predictions, whereas 25 did not. Oxaliplatin was given for 46 periods of time when predicted to be useful, whereas 28 treatments were expected to lack benefit, and 26 neither. Irinotecan hydrochloride was less optimal in its use, with 21 beneficial treatments, 34 lacking benefit, and two being of neither type. Interestingly, given the reliance on 5FU related compounds in the systemic treatment of CRC, we found that thymidylate synthase (TS) was a marker for worse outcomes in CRC (Figure 2). The literature already documents worse outcomes with high levels of TS [13]. However, only patients with unmatched treatments had positive biomarker results when IHC testing for TS.

Mismatch repair (MMR) deficient cancers are targets for anti-PD-1 therapy [14], and recently the FDA has approved Keytruda (pembrolizumab) for unresectable or metastatic solid tumors that have been identified as having a biomarker for MSI-H (microsatellite instability-high) or MMR deficient. We observe that although only three patients in this cohort had IHC markers tested for PD-L1 and the mismatch repair related markers MSH2, MSH6, PMS2 and MLH1; in all cases PD-L1 was negative while all of the MMR markers were positive. 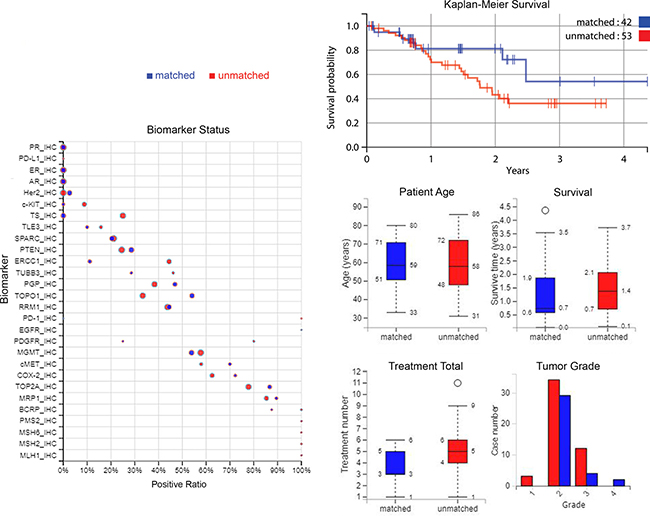 Figure 3: Plots of biomarker statuses, survival, and patient and tumor characteristics. Left: biomarker statuses in the treatment groups, where the size of the circle indicates the number of cases. Top-right: A Kaplan–Meier curve of overall survival from time of profiling, comparing treatment groups. Middle-right to lower-right: a summary of patient ages, survival time, treatment numbers, and grade of samples. Blue = matched patients, red = unmatched patients.

Biomarker values are compared between matched and unmatched in Figure 3 also (on the left), and some demographic and tumor information is summarized (middle-right to lower-right).

Here we looked at the benefit of profiling tumors using biomarkers to tailor clinical therapies accordingly, by investigating the differences in response between patients that followed such recommendations to those that did not completely adhere to them. We used clinical data for a colorectal adenocarcinoma cohort of patients, whose clinicians received treatment suggestions that used tumor molecular profiling by Caris Life Sciences and received associated treatment predictions.

The unmatched group received 6.6 more drug therapies than the matched group on average, and had a poorer survival prognosis, although these patients did have tumors that were more advanced than in the matched group, as shown in Table 2. We find that thymidylate synthase (TS) as an immunohistochemical marker is associated with significantly worse outcomes in this cohort (Figure 2).

The survival curves for the different treatment groups overlap but then diverge. This indicates that therapy predictions guided by tumor profiling have a positive effect on the choice of therapies and leads to an improved outcome, as would be expected if correct stratification of treatments occurs in the clinic. A reduction in mortality was also detected. Overall this gives a good indication that there is a benefit from tumor molecular profiling in this colorectal adenocarcinoma cohort using this technology.

The Caris CODE database (version 1.0) contains tumor molecular profile data for 841 patients with solid tumors. It also contains demographic information about these patients, the drug treatments that they received before and after molecular profiling and records of their clinical outcomes while they were still being monitored. There are 95 colorectal adenocarcinoma patients within this database, and this colorectal cancer cohort was mined after web scraping the data from the Caris CODE website, to understand if molecular characterization affected drug selection by treating physicians, and if any molecular subsets had different outcomes across tumor types. Table 1 describes the clinical characteristics of the patients that were profiled. According to Caris Life Sciences, 36% of cases used here had a metastatic sample profiled.

As shown in Figure 1, the amount of time that patients were monitored varied, although on average patients’ treatment records were available for 966 days (733 for matched treatment patients, 1150 for unmatched patients), and on average the time of monitoring after profiling was 497 days. The longest amount of time that records were available, i.e. before and after diagnosis, up until the last contact day, was 4442 days. The longest period of monitoring after tumor profiling (the patient represented on the furthest right of Figure 1) was 1594 days; this was 1634 days after diagnosis.

All authors contributed equally to the work described in this paper and were involved in writing it.

Thanks to Caris Life Sciences for the provision of their CODE database, and assistance by Dr David Spetzler, Todd Maney, Dr Jia Zeng, Dr Tina Liu, Dr Nick Xiao and Stephanie Ratliff in the use of this resource. We are also grateful to the patients involved in this study.

No authors declare a conflict of interest and received no honoraria for these publications.

This work was supported by the Action Against Cancer charity (http://www.aacancer.org/). Infrastructure support was provided by the Imperial Experimental Cancer Medicine Centre, the CRUK Imperial Centre, and the Imperial NIHR Biomedical Research Centre.

8. Deng G, Kakar S, Kim YS. MicroRNA-124a and microRNA-34b/c are frequently methylated in all histological types of colorectal cancer and polyps, and in the adjacent normal mucosa. Oncol Lett. 2011; 2:175–80.