Polymorphisms in four microRNAs and risk of oral squamous cell cancer: a meta-analysis

Materials and Methods: Free words were used to search for the relevant studies without language limitations in electronic databases including PubMed, Embase, Web of Science and SCOPUS through June 15, 2017. Odds ratios (ORs) were calculated to investigate the effects of microRNA polymorphisms on oral cancer risk.

MiRNAs exhibit remarkable tissue specificity [8], and miRNA biomarkers for OSCC may differ from those of other cancers. Several aberrantly expressed miRNA variants have been observed in OSCC patients, including microRNA-196a2 [9–16], microRNA-146a [9, 10, 12, 14, 17, 18], microRNA-149 [10, 12, 15] and microRNA-499 [9, 10, 19], among others. However, no consensus has been reached regarding whether and to what extent miRNAs could influence susceptibility to OSCC.

Abnormal microRNA polymorphisms in OSCC warrant more research to provide a basis for diagnosis, therapy and screening for the high-risk OSCC population. Advances in our efforts to detect the role of miRNAs in genetic susceptibility to OSCC may further elucidate their role in regulating OSCC risk and may identify certain miRNAs as oncogenic biomarkers. Therefore, the purpose of this study was to review the literature for evidence of correlations between certain microRNA polymorphisms and the risk of oral squamous cell cancer.

The initial electronic database searches of PubMed, Embase, Web of science and SCOPUS yielded 967, 18, 160, and 110 potentially studies, respectively. After reading the titles and abstracts of those studies, 20 articles were chosen for full-text reading, and their references were screened. Finally, 11 eligible studies on SNPs in miRNAs were included after the unqualified studies were discarded (Figure 1). Following that assessment, a data extraction form was constructed for the characteristics of the chosen studies (Table 1), and the data from the 11 included studies were extracted and synthesized. Of the 11 studies, 3 studies were given a score of 5 and recognized as high risk. In contrast, 3 high-quality trials were given a score of 7. The remaining 5 studies had a moderate risk of bias (Table 2). 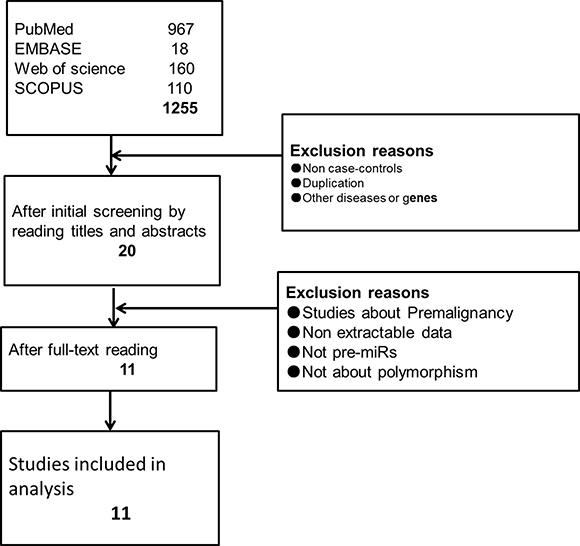 Table 1: Characteristics of the included studies on microRNA polymorphisms and risk of oral squamous cell cancer 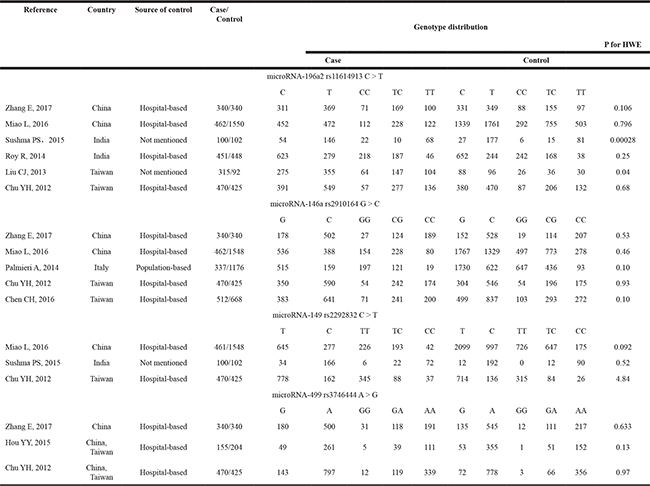 Table 3: Summary of tests for association between polymorphisms in four microRNAs and OSCC risk, of publication bias, and of included study number, under all genetic models of four miRNAs 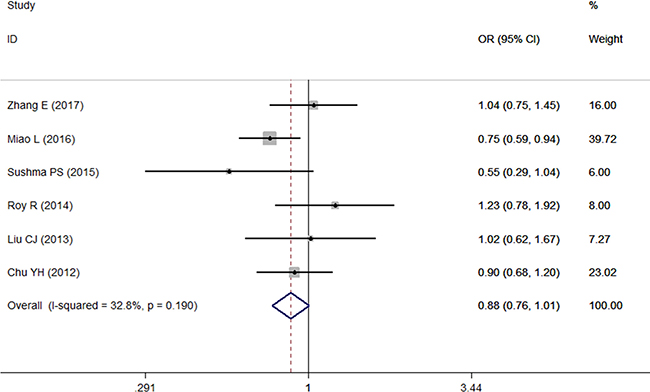 Figure 2: Forest plot of the relationship between the TT genotype of microRNA-196a2 and OSCC risk under TT vs TC+CC. 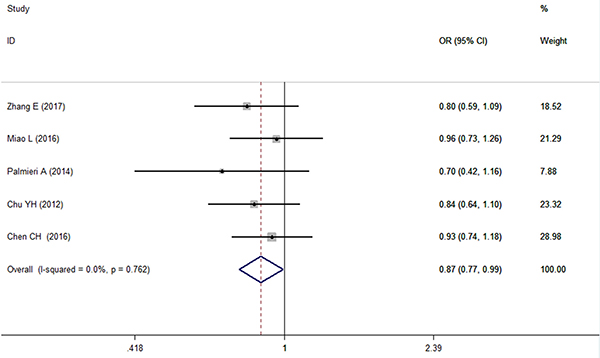 Figure 3: Forest plot of the relationship between the CC genotype of microRNA-146a and OSCC risk under CC vs GG+CG.

For microRNA-149 rs2292832, 3 studies [10, 12, 15] were eligible, involving 1356 cases and 2410 controls. Although the ORs in all genetic models were greater than 1, no significant association was observed in any of the 5 genetic models. However, these studies showed apparent heterogeneity (I2 ≥ 50%). Therefore, further well-designed studies investigating the relationship between the microRNA-149 rs2292832 polymorphism and risk of OSCC are warranted. 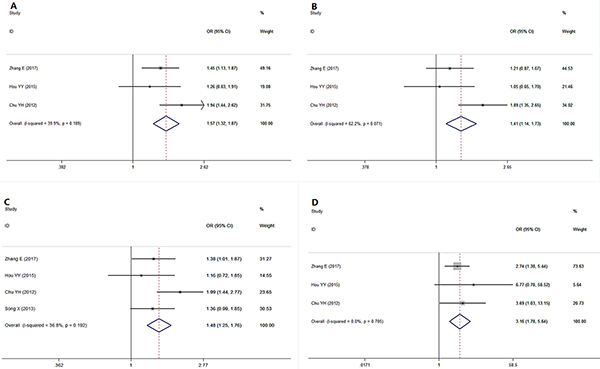 To confirm the outcome of our analyses, we conducted a sensitivity analysis by sequentially eliminating one study at a time. The sensitivity analysis revealed that certain studies significantly influenced the correlation between microRNA polymorphism and risk of OSCC. The TT genotype of microRNA-196a2 rs11614913 was found to potentially decrease OSCC risk (TT vs TC+CC, I2 < 50%, OR < 1, P < 0.05) when three studies were excluded [9, 11, 13] (Figure 5). From the illustrated data on microRNA-196a2 in those three studies, the authors confused minor allele frequency (MAF) [9], and the genetic distribution of the controls was not in HWE [11]. For the recessive model of microRNA-146a, three studies [9, 10, 17] influenced the statistical significance of the correlation between polymorphism and risk of OSCC (Figure 5). We surmise that the small number of studies included in our meta-analysis may contribute to the influence of the aforementioned studies; if more studies had been included, the influence of any one study would be decreased.

Figure 5: Sensitivity analysis conducted by sequentially eliminating one study at a time to examine the relationship between the TT genotype of miR-196a2 (A), the CC genotype of miR-146a (B) and OSCC risk.

Numerous studies have been conducted to investigate whether miRNAs affect susceptibility to OSCC, and the results have been controversial and inconsistent. This is the first meta-analysis conducted to assess the association between selected miRNAs and OSCC risk. Data from 8 and 3 studies indicated that microRNA-196a2 rs11614913 and microRNA-149 rs2292832 polymorphisms, respectively, have no significant effect on OSCC risk. However, the sensitivity analysis suggested that the TT genotype of microRNA-196a2 may decrease OSCC risk when one study was excluded. We also found that the GG genotype of microRNA-146a rs2910164 may negatively regulate OSCC risk. The pooled analysis of 3 studies showed that there may be a significant association between the G allele and the GG genotype of the microRNA-499 rs3746444 polymorphism and risk for OSCC.

OSCC is one of the most challenging and aggressive cancers, and it remains difficult to detect. MiRNAs, which are regulators of biological processes, regulate the pathogenesis of oral cancer and are thought to be potential biomarkers in cancer diagnosis, based upon their aberrant expression and single nucleotide polymorphisms [20]. Novel therapeutic techniques can also target miRNAs to treat OSCC. In a systematic review, the 4 miRNAs discussed in this report (microRNA-196a2 rs11614913, microRNA-146a rs2910164, microRNA-149 rs2292832 and microRNA-499 rs3746444) were found to potentially contribute to the genesis, progression and prognosis of OSCC [21]. As a result, more research on these promising candidate biomarkers is warranted to confirm the correlation between their single nucleotide polymorphisms and cancer risk.

The genetic variant of miR-196a2, a C to T nucleotide substitution, has been well studied and is thought be related to OSCC risk. Located in a region of the homeobox (HOX) genes, miR-196a plays an important role in regulating HOX expression and function [22]. By targeting important regulatory molecules, including HOX8 [23], miR-196 affects oncogenesis [24]. However, miR-196a either promotes or inhibits tumorigenesis, depending on the type of cancer. In breast cancer cells, pre-miR-196a2-T is converted less frequently than pre-mir-196a2-C into the mature miR-196a [25]. That finding is in agreement with our findings that the TT genotype of microRNA-196a2 may inhibit the genesis of OSCC. Furthermore, our pooled analysis was in agreement with a previous meta-analysis, which revealed that the upregulation of miR-196a2 is a biomarker that can discriminate between OSCC patients and healthy controls [26]. In the present study, considering the insignificant heterogeneity, non-publication bias and statistically significant association in the sensitivity analysis of microRNA-196, it could be concluded that the TT genotype of microRNA-196a2 can reduce OSCC risk.

For microRNA-146a, the G > C substitution within the pre-miR-146a sequence resulted in less conversion into mature miR-146a by affecting the efficiency of pri-miR-146a processing. Additionally, that substitution disturbed protein binding to pre-miR-146a [27]. Incontrovertible evidence has shown that dysregulated microRNA-146a expression is related to tumorigenesis, progression and prognosis [28]. However, the role of miR-146a is complex and controversial. Increased expression of miR-146a was suggested to be a biomarker for detecting, diagnosing and tracing cancers [29]. Although a previous meta-analysis demonstrated that the C allele of miR-146a increased the predisposition for head and neck cancer in the Caucasian population [30], our research was more reliable because it included seven eligible studies rather than three studies. A meta-analysis of microRNAs and risk of urological cancer also showed that the miR-146a G > C polymorphism reduced cancer risk [31]. Furthermore, a pooled analysis from a meta-analysis including 2 studies showed that the miR-146a polymorphism could reduce nasopharyngeal and OSCC risk but increase cervical cancer and skin squamous cell cancer risk [32]. Therefore, the miR-146a G > C polymorphism is strongly believed to be protective against OSCC.

The miR-149 polymorphism involves a C>T substitution. Through diverse signaling pathways, miR-149 targets Akt1, a gene that inhibits tumor cell apoptosis, thereby exerting its oncogenic potential [33]. No association between the miR-149 polymorphism and cancer risk has been identified in a meta-analysis of head and neck cancer susceptibility [30]. Likewise, in the present study, no significant association was discovered under any of the genetic models.

Located in the 3p mature miRNA, the miR-499 rs3746444 A/G polymorphism interferes with miRNA binding and pre-miRNA maturation [34]. Although arm selection influences cancer progression, the miR-499 polymorphism may not affect its arm selection, so it will nonetheless reduce miR-499 expression, especially miR-499-5p [19]. The miR-499a polymorphism was previously shown to be related to head-and-neck cancer and cervical squamous cell carcinoma [35]. The reason that various studies have yielded discrepancies is that they analyzed different populations or cancer locations. Furthermore, miR-499 also has varying effects on cancer risk, depending on the cancer type. Our analysis demonstrated that the miR-499 polymorphism may exert protective effects against OSCC, and this finding was consistent with the reduced expression of miR-499 in OSCC tissues, as well as the negative correlation between mir-499 expression and tumor size in clinical findings.

Many limitations might have influenced our findings. The most obvious limitation was the small number of included studies. Further research investigating microRNA polymorphisms and oral squamous cell cancer risk is warranted to confirm these findings. Furthermore, the poor consistency indicated by the sensitivity analysis of the recessive models of microRNA-196a2 and microRNA-146a might have influenced the statistical power of our study. Selection bias of included controls should be avoided by basing selection on the population rather than the hospital. Moreover, environmental factors, such as habits, should be balanced among studies. Other limitations of this study include a lack of subgroup analysis, disparity in OSCC location and the fact that we did not clarify non-response rates. Our meta-analysis failed to avoid these limitations due to a deficiency of data.

Due to the small number of included studies, the associations between the selected SNPs of these four microRNAs and OSCC risk are weak.

The protocol details were registered with the public registry of systematic reviews, PROSPERO (CRD42017073480). Our study was conducted by following the recommended Preferred Reporting Items for Systematic Reviews and Meta-Analyses (PRISMA) statement. A search of PubMed, Embase, Web of Science and SCOPUS was conducted through June 15, 2017, to identify all the relevant studies without language limitation. The search strategy, which employed free-text words, is shown in Table 4.

Table 4: The search strategy for each database

Next, titles and abstracts were read manually for preliminary analysis, in duplicate, by two reviewers. Disagreement was resolved by discussion or by referring the debate to a third reviewer. Finally, the chosen articles were subjected to the following inclusion and exclusion criteria:

1. The included articles should be case-controls. 2. Patients with a definite diagnosis of oral cancer, not oral precancer, should be mentioned. 3. The included studies must contain extractable data on SNPs in pre-miR distribution in cases and controls.

1. Articles are review articles or they describe experiments in animals. 2. Studies focus on miRNA-processing genes or miRNA-binding site genes instead of pre-miRNA genes. 3. Studies report non-extractable data. 4. Studies in which the P value for HWE (PHWE) in the control group was less than 0.05 would be eliminated from the sensitivity analysis. 5. Studies are repeated studies by the same author or team.

The minor allele frequency (MAF) was confirmed in PubMed. The outcome variables consisted of the allele and genotype frequencies of miRNA polymorphisms in cases and controls. Stata version 14.0 software was used for the data analysis. The odds ratio (OR) and 95% confidence interval were calculated for five genetic models: the allele model, the additive model, the codominant model, the dominant model and the recessive model. The I2 test was chosen to test for statistical heterogeneity. If I2 ≥ 50%, which indicates substantial heterogeneity, we used a random-effects model to summarize outcome variables. If I² < 50%. meta-analyses were reported using a fixed-effects model. The hypothesis tested was defined as statistically significant when the P value was < 0.05.

We would like to thank “American Journal Experts” for the language editing.