In this network meta-analysis, we determined the optimal surgical method for treating unstable femoral intertrochanteric fractures. We searched the EMBASE, Cochrane Library and Medline databases for studies evaluating sliding hip screws (SHS), gamma nail (GN) or proximal femoral nail antirotation (PFNA) methods, and included nine randomized controlled trials that met the inclusion criteria. Our analysis showed no differences in the rates of complications between SHS and PFNA relative to GN (p > 0.05). However, the surface under the cumulative ranking curve (SUCRA) score for PFNA (77.6%) was higher than the SUCRA scores for GN (65%) and SHS (7.5%). This suggests PFNA is the better surgical method than GN or SHS for unstable femoral intertrochanteric fractures.

We searched the MEDLINE, EMBASE and the Cochrane Central Register of Controlled Trials (CENTRAL) databases for studies related to treatment of unstable femoral intertrochanteric fractures until May 30, 2017 using search parameters listed in Supplementary List 1. We also manually searched bibliographies of relevant literature to further identify any additional studies that are relevant for our analysis.

The quality of included literatures was assessed by two independent investigators (G.H.L. and X.B.Z.) using the Cochrane risk of bias tool.

We estimated relative risk (RR) with 95% confidence interval (95% CI) for dichotomous variables. Z test was used to measure the pooled effect size [11]. Chi2 tests and I2 statistic were used to determine heterogeneity in the pooled data. Data with I2 > 50% indicated significant heterogeneity [12, 13] and was analyzed by the fixed-effects model, whereas data with I2 < 50% was analyzed by the random-effects model. Statistical analysis was performed with the Stata software, version 13.0 (Stata Corporation, College Station, Texas, USA). P < 0.05 was considered statistically significant. Network meta-analysis compares multiple treatments simultaneously by combining direct and indirect evidences of the relative treatment effects [14]. We used inconsistency factors (IF) to estimate heterogeneity in each closed loop and a 95% CI (IF) value of zero indicated absence of statistical significance [15]. Funnel plot analysis was used to estimate small-study effects [16]. We ranked the three interventions for treating unstable femoral intertrochanteric fractures according to Surface Under the Cumulative Ranking Probabilities (SUCRA), which represents the percentage of the area under the curve [17].

We identified 3,109 records by searching MEDLINE, EMBASE and the Cochrane Central Register of Controlled Trials (CENTRAL) databases using search parameters listed in Supplementary List 1. We excluded 1,785 duplicate records and further 1,218 records after reviewing titles and abstracts. After screening the full text of the remaining 186 records, we included 9 articles in our network meta-analysis [2, 5, 18–24]. The study by Zou et al. analyzed both unstable and stable fractures [24] and reported the results separately. Therefore, we extracted the data regarding unstable fractures in this study for our analysis. Figure 1 summarizes the selection criteria for enrolling articles in this network meta-analysis. Table 1 summarizes the selected articles in this network meta-analysis. These studies were published between 1992 and 2015 and included 993 participants. Although all of the studies reported randomization, only six trials [2, 5, 18–21] mentioned an adequate randomization technique, and six trials [2, 5, 18–21] reported information of allocation concealment. Due to the nature of the surgical interventions, the blinding was impossible. Figure 2 shows the Cochrane risk of bias assessment of the included studies. 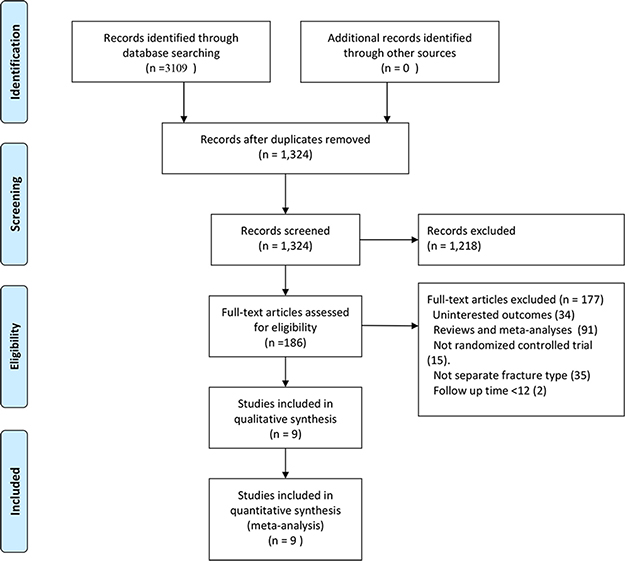 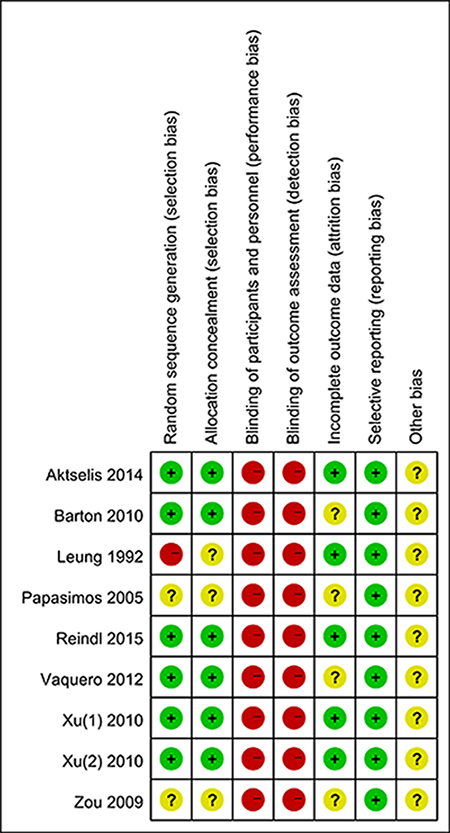 As shown in Figure 3, the lines in the evidence network represent direct comparison between two directly connected interventions. Interventions without connection are compared indirectly through the network meta-analysis. The width of the lines represents the number of trials, whereas the size of the nodes indicates the overall sample size of GN, PFNA and SHS. 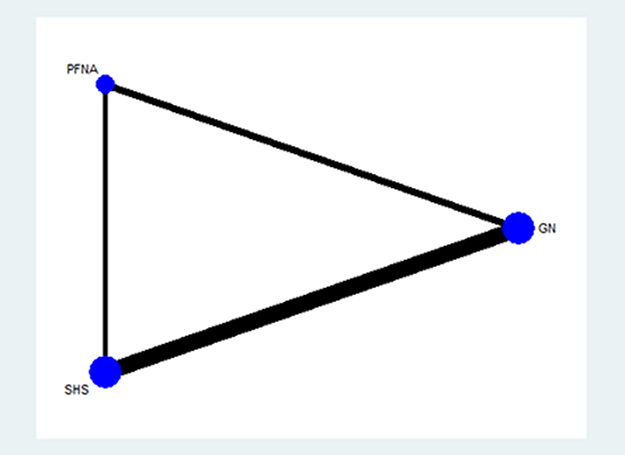 Figure 3: Evidence network of the randomized controlled trials (RCTs) in the network meta-analysis. 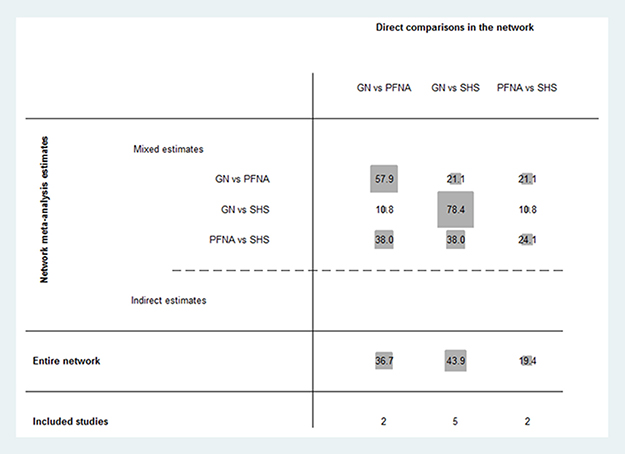 Figure 4: Contribution plot of enrolled studies in the network meta-analysis.

Evaluating and presenting assumptions of the network meta-analysis

Figure 5 shows the inconsistency plot used to evaluate the heterogeneity among studies in the closed loop of the network meta-analysis. It was composed of a single triangular GN - PFNA- SHS loop with a 95% CI (IF) value of zero, which demonstrates that our network analysis data was consistent. Furthermore, all the P values were greater than 0.05, which indicates that the indirect and direct comparisons of the 3 internal fixations were consistent. As shown in Figure 6, the funnel plot was symmetrical suggesting absence of publication bias. 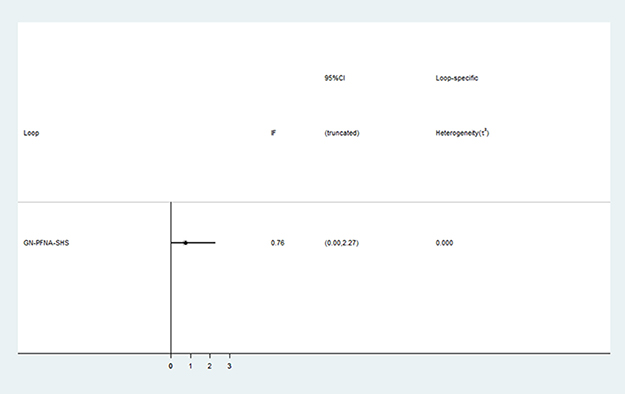 Figure 5: Inconsistency test for direct and indirect comparisons of the enrolled studies in the network meta-analysis. 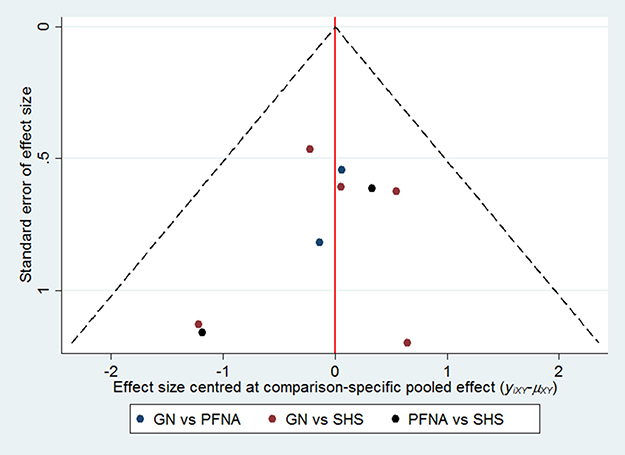 Figure 6: Funnel plots show assessment of publication bias of all the enrolled studies. 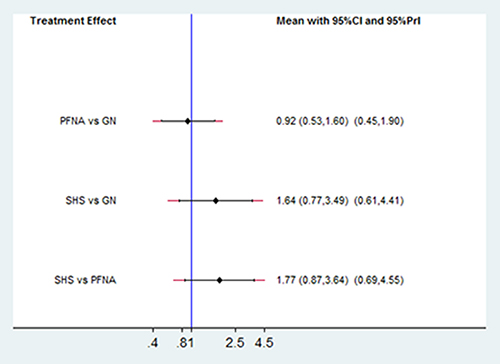 Figure 7: Comparison of the number of complications in the treatment methods for unstable femoral intertrochanteric fractures. 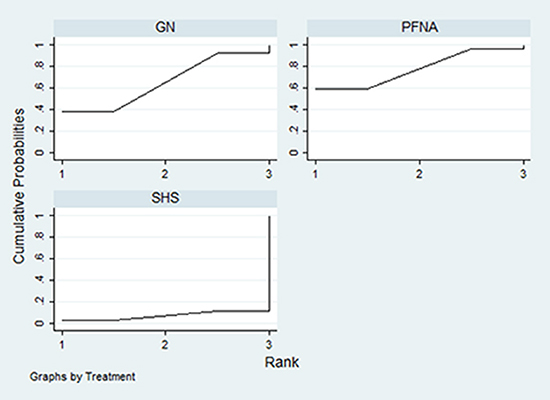 SHS and GN are the most common devices to fix femoral intertrochanteric fractures in the last decade [25, 26]. PFNA is a relatively new device that has been used to fix femoral intertrochanteric fractures [25, 27, 28]. Intramedullary nailing (IMN) has become a popular method of stabilizing the proximal femoral fractures in elderly patients because of short incision, less operative time, minimal blood loss and rapid rehabilitation, which minimizes the risk of medical complications [29, 30]. Several studies have shown that IMN is superior to SHS [30–32]. However, Reindl et al. reported that there were no differences between the intramedullary and extramedullary internal fixations based on the primary and secondary clinical outcomes [2]. Queally et al. reported that there were no differences between IMN and SHS [33]. Our network meta-analysis also demonstrates no differences between SHS and IMN in regard to complications. However, the SUCRA scores were higher for INM, thereby suggesting lower probability of complications for INM methods than for SHS.

The differences between various intramedullary nailing devices with similar biomechanical principles include the requirement for diaphyseal reaming and the use of anti-rotation systems in fixing the femoral neck. GN is characterized by the need for reaming and the use of lag screw, whereas PFNA is an unreamed nail with an anti-rotational helical blade. Simmermacher et al. reported that PFNA was an optimal implant for treating unstable femoral trochanteric fractures because it prevented rotation of femoral head [34]. Biomechanical studies revealed that the helical blade system showed more stability than the conventional lag screw in treating unstable femoral intertrochanteric fractures [35, 36]. However, Zhang et al. reported that despite these modifications, the outcomes were similar [37]. Vaquero et al. reported that the risk of encountering an intraoperative or local postoperative complication was 71% (22/31; 95% CI: 52–86) for the PFNA treatment group, which was similar to the risk encountered by patients undergoing GN [19]. Our network analysis showed that the RR values for PFNA, GN and SHS were similar. However, the SUCRA scores showed that probability of complications were lower for PFNA than in GN and SHS.

Our network meta-analysis had several strengths. First, we determined efficacy estimates of different treatment strategies based on direct and indirect comparisons. Second, we estimated SUCRA and posterior probabilities of outcomes to distinguish the subtle differences between the three different treatments. We determined that PFNA was the best therapeutic method based on the SUCRA scores. Third, a 95% CI (IF) value of zero demonstrated consistency of our network meta-analysis. Finally, we used a broad and extensive search strategy, which minimized publication bias.

However, this network meta-analysis has several limitations. First, although we used an extensive search strategy, only nine studies were eligible for this network meta-analysis. Second, we focused on adverse events such as cut-out, non-union, intra-operative, post-operative fractures, superficial wounds, wound infection, embolism and fixation failure and did not consider other outcomes like functional scores and patient satisfaction because they were not available. Third, the differences in the postoperative x-ray images between GN, PFNA and SHS resulted in “blinding of outcome” assessment being assessed as “high risk” for 8 studies. Therefore, there may have been performance, detection and attribution bias in our results. Finally, the quality of the recruited studies was not high and hence may have included selection bias or other confounding factors. Hence, in the future, well-designed, high quality, large scale RCT studies are necessary.

In summary, our network meta-analysis shows that PFNA is currently the optional treatment for unstable femoral intertrochanteric fractures.

5. Barton TM, Gleeson R, Topliss C, Greenwood R, Harries WJ, Chesser TJ. A comparison of the long gamma nail with the sliding hip screw for the treatment of AO/OTA 31-A2 fractures of the proximal part of the femur: a prospective randomized trial. J Bone Joint Surg Am. 2010; 92:792–98.