As a structure-specific nuclease, FEN1 stimulates Okazaki fragment maturation during DNA repair and its efficient removal of 5’-flaps during long-patch base excision repair [5]. FEN1 is also reported to possess the activities of 5’ end exonuclease and gap dependence endonuclease, which can promote apoptosis-induced DNA fragmentation in response to apoptotic stimuli [5, 6]. FEN1 maintains the stability of the genome that supports multiple DNA metabolic pathways.

FEN1 promotes cell proliferation [7], and its deficiency or overexpression can result in predisposition to cancer and the rapid development of tumors [8]. In breast cancer and prostate cancer, the overexpression of FEN1 is characterized as a possible biomarker for monitoring the progression of cancers and a potential target for therapy [9, 10]. In LN308 glioblastoma cells, FEN1 up-regulation is followed by cell resistance to chemotherapeutic drugs such as cisplatin, temozolomide, nimustine, and methyl methanesulfonate [11]. FEN1 overexpression can also cause resistance to many chemotherapeutic drugs in breast cancer [3].

Curcumin is a polyphenol extracted from turmeric root, and can induce tumor cell apoptosis and inhibit breast cancer tumor growth in vitro and in vivo [12–15]. Our previous study demonstrated that curcumin inhibits cell proliferation through the down-regulation of FEN1 expression in breast cancer cells [16]. We explored curcumin’s effect on cisplatin sensitivity and FEN1 expression. 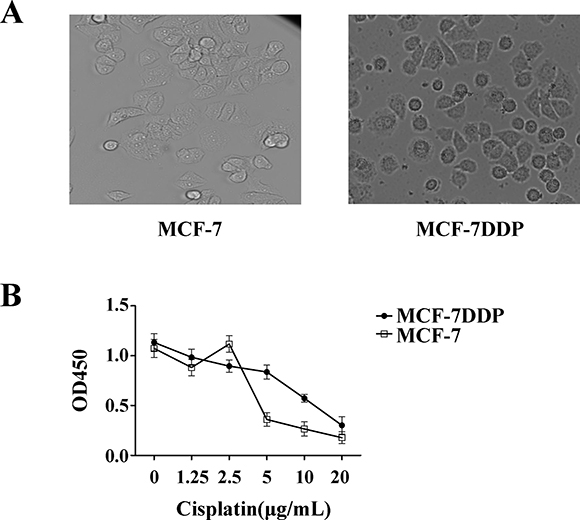 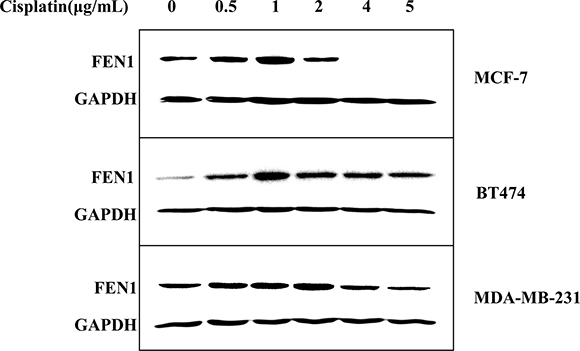 Figure 3: FEN1 overexpression promotes cisplatin resistance in breast cancer cells. (A) Different protein levels of FEN1 in MCF-7 and MCF-7DDP cells. Lysates of MCF-7 and MCF-7DDP cells cultured in regular media were prepared and tested for FEN1 content by western blotting. (B) MCF-7 cells stably overexpressing FEN1 were screened by G418 for four weeks and identified by western blot. (C) MCF-7 cells stably overexpressing FEN1 or cells transfected with empty plasmid were treated with increasing concentrations of cisplatin for 48 h, and cell proliferation was determined by CCK-8 assay. (D) MCF-7DDP cells were transfected with FEN1 siRNA and its negative control siRNA (NC siRNA) for 48 h. Cells were collected and analyzed for FEN1 protein expression using western blotting. (E) The transfected MCF-7DDP cells were treated with or without 5 μg/mL cisplatin for 48 h and cell proliferation was analyzed by CCK-8 assay. *P < 0.05.

MCF-7, MCF-7DDP, and MDA-MB-231 cells were treated with increasing curcumin concentrations, and the effect on FEN1 expression and cell proliferation were analyzed (Figure 4). FEN1 protein expression was decreased in all three kinds of cells in a dose-dependent manner (Figure 4A), and the proliferation of all three cells could be inhibited in a dose-dependent manner by curcumin (Figure 4B, P < 0.05). The IC50 value of curcumin against MCF-7, MCF-7DDP, and MDA-MB-231 was 25 μmol/L, 40 μmol/L, and 26 μmol/L, respectively. In accordance with our previous data [16], these results suggested that curcumin could inhibit breast cancer cell proliferation, including cisplatin-resistant cells through FEN1 down-regulation. 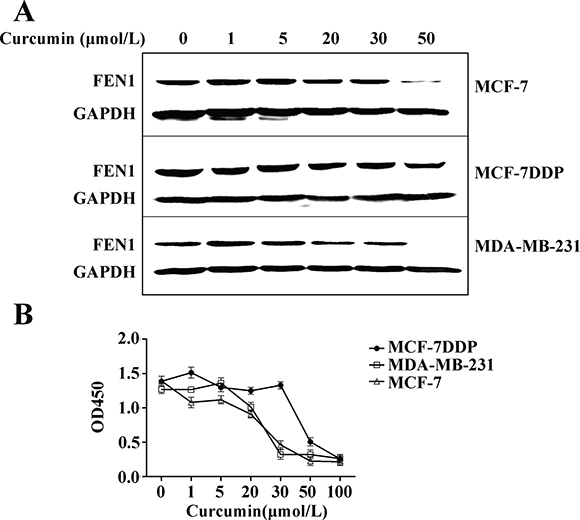 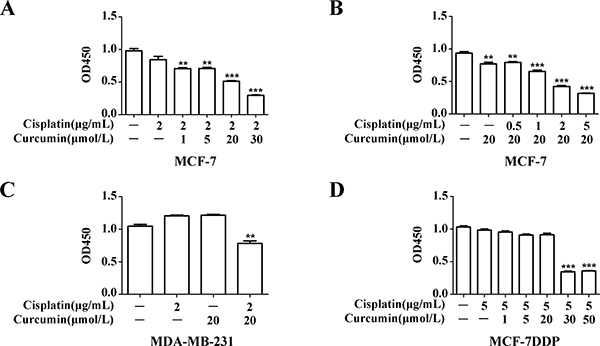 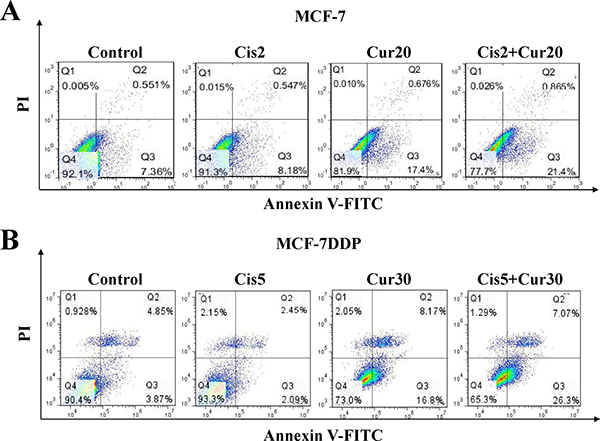 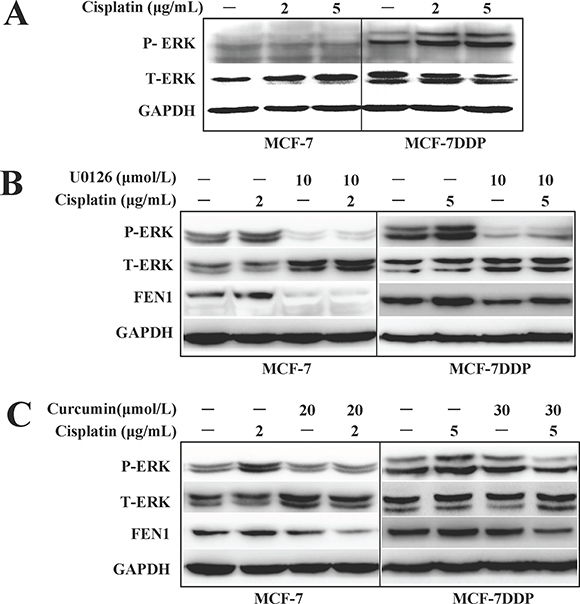 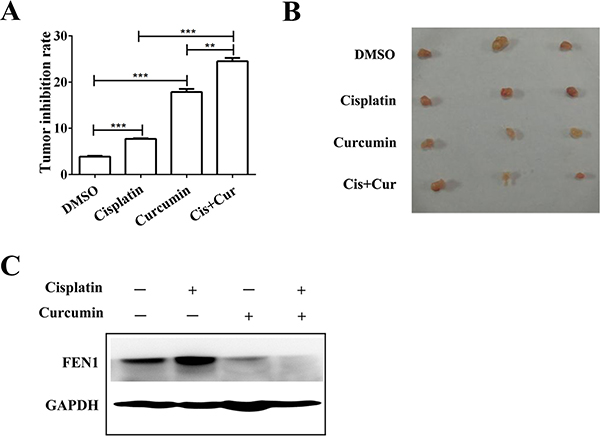 Figure 8: Curcumin enhances cisplatin antitumor effects through FEN1 down-regulation in vivo. (A) Nude mice (n = 4) bearing subcutaneous tumors were treated intraperitoneally with DMSO, cisplatin, curcumin alone, or their combination, and the tumor volume was calculated as described in Materials and methods. **P < 0.01, ***P < 0.001. (B) Representative images of tumor-bearing mice in each group. (C) FEN1 protein expression in each group. GAPDH served as the loading control.

FEN1, a structure-specific nuclease, is an endonuclease that stimulates base excision repair. Once the coding region of FEN1 is changed, the genetic abnormality can lead to an abnormal increase or decrease of FEN1 content in the body, and functional deficiency of FEN1 can cause genomic instability and predisposition to cancer [4, 21]. FEN1 overexpression is correlated to cancer, and FEN1 is highly expressed in the cells of metastatic prostate cancer [22] , gastric cancer [23] , neuroblastomas [24], pancreatic cancer [25], lung cancer [26], and breast cancer [9, 10]. Our previous studies have shown that FEN1 down-regulation expression can effectively inhibit the proliferation of breast cancer cells overexpressing FEN1 [16]. Our present study found that cisplatin could induce FEN1 mRNA and protein up-regulation in a dose-dependent manner (Figures 2A, 3A ,7A, and Supplementary Figure 1). An RNAi-mediated down-regulation of FEN1 expression could enhance breast cancer cell sensitivity to cisplatin (Figure 3D and 3E). This suggests that FEN1 overexpression may promote cisplatin resistance, and that FEN1 could be a potential therapeutic target for the treatment of cisplatin resistance in breast cancer.

Curcumin can inhibit the growth of various cancer cells from different organs including breast cancer cells [27]. As a cancer chemosensitizing agent, curcumin can effectively eliminate resistance to many chemotherapy drugs, including cisplatin, mitomycin C and paclitaxel, in a wide variety of tumor cell types [28–32]. Because of its chemosensitizing effect, a combination of cisplatin with curcumin is proposed to improve the sensitivity of cisplatin. Although a combination of cisplatin with curcumin can reverse cisplatin resistance by promoting cell proliferation inhibition and apoptosis in lung cancer [30], Ke CS, et al [33] found that a combination therapy of curcumin with cisplatin could increase MCF-7 cell survival rate and exhibit an antagonizing effect. These dissimilar results suggest that the curcumin/cisplatin combination warrants further assessment.

Though cisplatin-induced phosphorylation of NF-κB and ELK via ERK signaling were correlated with FEN1 up-regulation (Supplementary Figure 3), further study is needed to decide whether curcumin could down-regulate FEN1 expression through the specific transcription factors or epigenetic mechanisms such as acetylation and methylation. 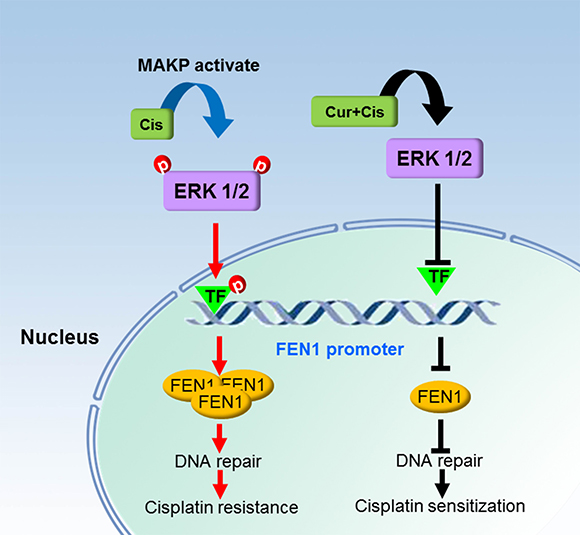 Human breast cancer cell lines MCF-7, BT-474, and MDA-MD-231 were purchased from American Type Culture Collection (ATCC), and characterized by DNA profiling. Cells were cultured in high-glucose Dulbecco’s modified Eagle’s medium (DMEM) with 10% fetal bovine serum (FBS), 1% non-essential amino acids (NEAAs), streptomycin (100 μg/mL), and penicillin (100 U/mL) in a humidified atmosphere of 5% CO2 at 37°C. MCF-7 cells with high cisplatin concentrations were used to create 5 μg/mL cisplatin-resistant strains (MCF-7DDP). Cisplatin was added twice a week after reseeding. Every two months, cell survival was analyzed by MTT assay. The IC50 value of cisplatin against MCF-7 and MCF-7DDP were 4 μg/mL and 15 μg/mL, respectively. MCF-7DDP cells were four times as resistant to the cytotoxic effect of cisplatin as compared with the initial MCF-7 cells.

Breast cancer cells were incubated with annexin V-FITC and PI according to the manufacturer’s instructions (BD, 561012), and then the apoptosis was analyzed by flow cytometry.

MCF-7 cells were transfected with either pIRES or pIRES-FEN1, using Lipofectamin 2000 (Invitrogen, Grand Island, NY, USA). At 72 h after transfection, G418 was then added to the transfected cells with an increasing concentration up to 500 μg/mL over a 1-month period. MCF-7 cells stably overexpressing FEN1 were identified by western blot, then used for the experiments.

The short interfering RNA (siRNA) strand oligomers specific for FEN1 and its negative control siRNA (NC siRNA) were synthesized according to the reference [34]. Cells were plated in 6-well plates or 48-well plates, and incubated for 24 h. Next, cells were transfected with siRNA using the Lipofectamin 2000 in accordance with the manufacturer’s instructions. At 6 h after transfection, cells treated with or without 5 μg/mL cisplatin for 48 h, then harvested and used for western blot analysis or cell proliferation assays.

Cells were seeded into 6-well plates with 0.5 × 106 cells/well, followed by a treatment with various concentrations of cisplatin and curcumin for 30 min or 24 h. Isolation of cell extracts and western blot analysis were described previously [16] The cells were harvested and the protein concentrations were measured by BCA protein assay kit. Aliquots containing 50 μg of protein were resolved by 10% SDS-PAGE, followed by electrotransfer to a PVDF membrane. Immuno-detection was carried out using FEN1, p-ERK1/2, total-ERK antibody, or GAPDH antibody. GAPDH was used as a control for equal loading and transfer. Quantitative densitometry of the immuno-images was performed using the Model GS-700 Imaging Densitometer with Molecular Analyst Software (Bio-Rad Laboratories, Hercules, CA, USA), and expressed as the ratios to the density of GAPDH bands.

Five-week-old female nude mice were purchased from the Laboratory Animal Center of China (Shanghai, China) and fed a sterilized mouse diet and water. The nude mice (n = 4) were anesthetized through isoflurane inhalation, and 1 × 107 MCF-7 cells suspending in 0.1 ml PBS was injected subcutaneously into the right axillary of each mouse. After 14 days, the mice were randomly assigned to four groups (n = 3/group), and either treated with DMSO (control), curcumin (100 μg/kg), cisplatin (2 mg/kg), or curcumin plus cisplatin by intraperitoneal injections every other day for 2 weeks, respectively. The length and width of the xenograft tumors were monitored before and after treatment, and their volumes were estimated using the following formula: volume = width2 × length × 1/2. The mice were sacrificed and tumors were harvested for FEN1 expression analysis.

Data are the mean ± SD obtained from at least three independent experiments. Statistical comparisons between groups were performed by one-way analysis of variance (ANOVA), followed by student’s t-test. P < 0.05 was considered significant.

We are grateful to Dr. Binghui Shen in the Department of Radiation Biology of the Beckman Research Institute of City Hope, USA for providing the FEN1 expression plasmid. This work was supported by a grant from the National Natural Science Foundation of China (No. 31571459 and No. 81272908).