Integration of the high risk human papillomavirus (HR-HPV) genome into host chromatin is an important step in cervical carcinogenesis. We identified HR-HPV integration sites within the human genome through detection of integrated papillomavirus sequences-PCR and assessed the role of high mobility group A 2 (HMGA2) in cervical carcinogenesis in clinical samples and cell lines. HPV integration sites were analyzed in 40 cervical cancer samples, while copy number variation and protein expression were assessed in 19 normal cervixes, 49 cervical intraepithelial neoplasia (CIN), and 52 cervical cancer samples. Overall, 25 HR-HPV integrating loci were detected in 24 cervical samples; HMGA2 was the only recurring integration site. Both HPV copy number and HMGA2 protein expression were higher in cervical cancer than CIN samples. Area under the curve (AUC) values for HMGA2 expression and HPV copy number were 0.910 (95% CI: 0.844–0.976) and 0.848 (95% CI: 0.772–0.923), respectively. Expression of Bcl-2 and Caspase 3 can indicate the cell proliferation and apoptosis. Transfection of HMGA2 siRNA decreased HMGA2 mRNA and protein expression, Bcl-2 expression, inhibited cell proliferation, and increased Caspase 3 expression and apoptosis in SiHa, CaSki and S12 cervical cancer cells. HMGA2 overexpression had the opposite effects. These results suggest that elevated HMGA2 expression is associated with transformation of CIN into cervical cancer and that HMGA2 might be a useful biomarker for assessing the risk of cervical lesion progression.

Cervical cancer, the second most common cancer and the third leading cause of cancer-related death in women worldwide, creates substantial public health and financial burdens in developing countries such as China [1, 2]. Although high-risk human papillomavirus (HR-HPV) contributes to more than 90% of cervical cancer cases, HR-HPV infection is necessary but not sufficient for cancer development [3]. The E6 and E7 oncogenes of HR-HPV, which target the p53 and retinoblastoma (Rb) proteins, respectively, are crucial factors in cervical cancer carcinogenesis.

The high mobility group A 2 (HMGA2) protein belongs to a family containing 4 members: HMGA1a, HMGA1b, HMGA1c and HMGA2. The human HMGA2 gene contains 5 exons located on the chromosome band 12q13-15 and spanning more than 140 kb. HMGA2 protein directly binds to DNA, modifying its conformation to allow binding of a group of transcriptional factors (TF). Also, the HMGA2 can inhibit tumor cell apoptosis by protecting the telomere [4]. Previous studies have identified HMGA2 as a hot spot gene for HPV integration [5], and it can affect cell apoptosis by exerting opposite influences on Bcl-2 and Caspase 3 [6].

Breakpoints in the human and HPV genomes

HPV integration can cause DNA breakage and changes in gene expression, we conducted additional experiments focusing on HMGA2. FISH and IHC were used in CIN and cervical cancer tissue samples to examine HMGA2 copy numbers and protein levels. We also assessed the potential of HMGA2 as a biomarker for progression from CIN to cervical cancer. 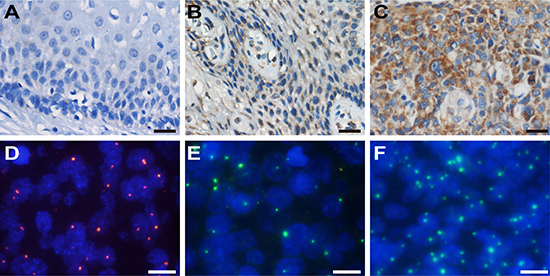 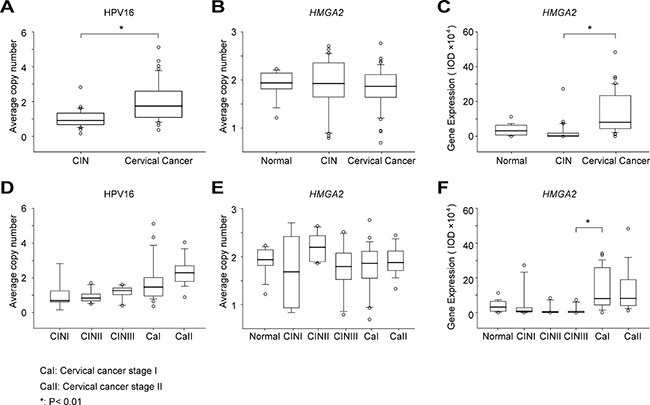 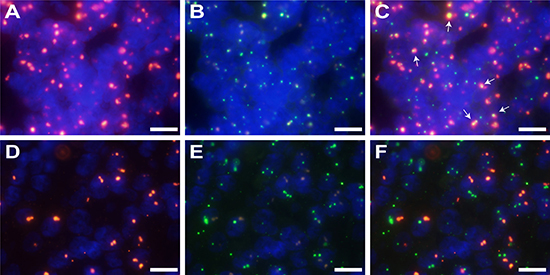 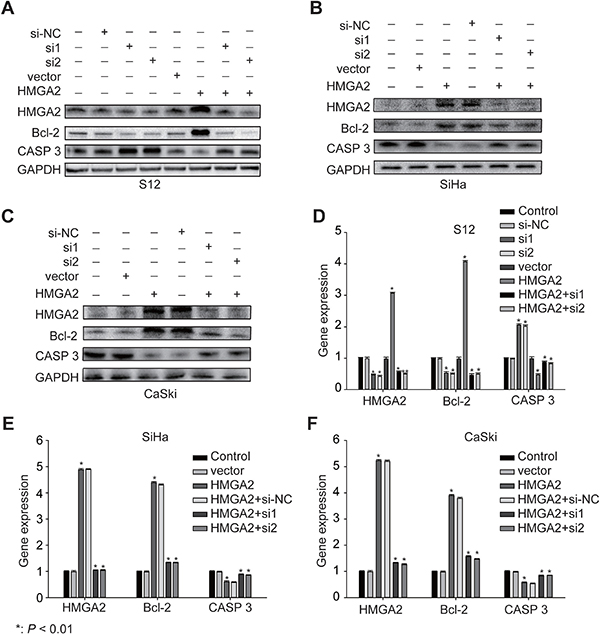 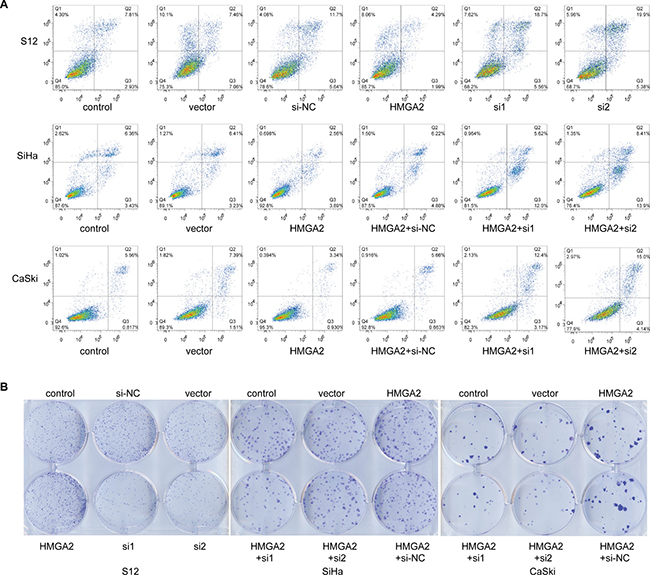 Here, we used DIPS-PCR to identify HPV integration sites in the human genome. The HMGA2 gene was identified as one such locus. HMGA2 is a non-histone chromatin protein encoded by the HMGA2 gene located in region 12q13-15. HMGA2 protein, which binds to the minor groove of AT-rich DNA sequences to alter chromatin structure and regulates the transcription of several genes, is expressed widely during embryogenesis but at low levels in adult tissues [9]. Chromosomal rearrangements involving the region around the HMGA2 gene have been reported in several benign mesenchymal tumors [10]. In malignant tumors, HMGA2 overexpression has been reported in esophageal [11] and lung [12] cancers. Elevated HMGA2 expression is associated with a highly malignant phenotype, poor prognosis, increased metastasis, and reduced survival [13, 14]. As a DNA binding protein, HMGA2 regulates the cell cycle by binding to the crucial regulator pRb [15] and inducing cyclin A expression [16]. These findings suggest that HMGA2 may also play an important role in cervical cancer. We therefore investigated the utility of HMGA2 as a biomarker for cervical cancer by assessing genomic instability of the HMGA2 locus using FISH and HMGA2 protein expression using IHC.

Because the proto-oncogene HMGA2 may play a crucial role in the transition of CIN into cervical cancer, treatments targeting HMGA2 might be potential therapeutic strategies. In this study, integration of HPV into the HMGA2 gene was detected in only 2 samples, but HMGA2 protein expression was elevated in a much larger proportion of the cervical cancer samples. This indicates that HPV integration can at most account for only part of the observed overexpression of HMGA2 in cervical cancer. We also examined the mechanisms by which HMGA2 might contribute to cervical carcinogenesis in SiHa, CaSki, and S12 cells. Bcl-2 (B-cell lymphoma 2) is a member of the Bcl-2 family and regulates cell death (apoptosis) by either inducing (pro-apoptotic) or inhibiting (anti-apoptotic) apoptosis [17, 18]. Caspases (cysteine-aspartic proteases) are a family of protease enzymes playing essential roles in programmed cell death (including apoptosis) and inflammation. Caspase 3 is a member of the caspase family, and over-activation of caspase-3 can lead to excessive programmed cell death [19]. We chose Bcl-2 and Caspase 3 to demonstrate the potential role of HMGA2 in cervical carcinogenesis. Down-regulation of HMGA2 reduced Bcl-2 expression and increased Caspase 3 expression (Figure 5), which in turn reduced cell proliferation and increased apoptosis rates (Figure 6), in all three cell lines. In contrast, up-regulation of HMGA2 increased Bcl-2 expression, decreased Caspase 3 expression, increased cell proliferation, and decreased apoptosis rates (Figures 5 and 6). These data suggest that HMGA2 promotes cell proliferation and tumor malignancy.

A total of 49 CIN and 52 cervical cancer patients were recruited at Tongji Hospital between 2014 and 2017. As negative control, 19 patients from the Gynecological Department who underwent hysterectomies and were confirmed to have normal cervixes were also recruited. The samples were collected via surgery and biopsy. Pathological diagnoses were evaluated and confirmed by two different pathologists from the Pathology Department of Tongji Hospital. All patients provided written informed consent. All experiments were approved by the ethical committee of Tongji Hospital. DNA was extracted from 40 fresh cervical cancer tissue samples; all normal cervix, CIN, and cervical cancer tissue samples were formaldehyde-fixed and paraffin-embedded, and slides with 4-μm thick sections of these samples were obtained. One slide per sample was stained with hematoxylin and eosin and examined by a pathologist to confirm CIN or cervical cancer. Clinical data were obtained from individual patient charts. International Federation of Gynecology and Obstetrics (FIGO) staging was used.

Detection of integrated papillomavirus sequences via ligation mediated PCR (DIPS-PCR) was performed to identify HPV integration loci in sample DNA. The assay was performed as described by Luft et al. [20]. Briefly, the Sau3AI-specific ds-adapter was ligated to genomic DNA after it had been digested with Sau3AI. First-round linear and second-round exponential PCR were then conducted. Primers used in this procedure are listed in Supplementary Table 1. Products of exponential PCR were analyzed on 2% agarose gels, stained with Cyber Green, and measured using UV light on an ChemiImager 5500 (Alpha Innotech, Kasendorf, Germany). All products were sequenced at Tianyi Biotechnology, Ltd.

A 1899 bp-long sequence of human HMGA2 CDS (NCBI Reference Sequence: NM_003483.4) was synthesized and ligated to the PUC57 vector as a template. This CDS sequence was amplified with the following primers: forward, 5′-GGAGTCTCCCCATCCTCCTT-3′; reverse, 5′-TCGCTCCTCCCACCTCATAA-3′. The complete sequence is shown in Supplementary Table 2. The whole genome plasmid for HPV type 16 (HPV-16) was a kind gift from Harald zur Hausen. The probes were labeled using standard nick translation with digoxigenin-dUTPs or biotin-dUTPs. The slides were dewaxed, rehydrated, pre-treated with hydrogen peroxide, dehydrated again, digested, and dehydrated once more. The probe and target DNA were denatured simultaneously prior to hybridization overnight. After hybridization, the preparations were stringently washed with 2× SSC containing formamide. The probe was detected using peroxidase-conjugated sheep anti-digoxigenin Fab fragments (1:200; Roche), Cy3-conjugated streptavidin (1:100; Roche), or FITC-labeled tyramide (1:50, Perkin Elmer) and mounted with Vectashield (Vector Laboratories) containing 4′,6-diamidino-2-phenylindole (DAPI). The results were analyzed under a fluorescence microscope (Olympus BX53) using Cellsens Fluorescence imaging system software. Copy numbers were evaluated based on numbers of punctate signals per nucleus.

IHC was used to examine HMGA2 protein expression. IHC reactions were performed on slides following a standard 3,3′-Diaminobenzidine (DAB) staining protocol. Briefly, the slides were dewaxed, rehydrated, washed with water, and then pre-treated with 3% hydrogen peroxide. The slides were boiled in antigen retrieval solution, blocked with 1% BSA, and incubated overnight in a humidified chamber at 4° C with an anti-HMGA2 monoclonal antibody (1:50, Abcam, ab97276). After incubations with biotinylated antibody and streptavidin-peroxidase, staining was developed in a solution of 3,3′-Diaminobenzidine. Slides were then counterstained with hematoxylin, dehydrated, cleared with xylene, and mounted. Image pro plus (IPP) software was used to analyze the staining. Integral optical density (IOD) of staining was analyzed.

A total of 200 cells were plated in triplicate in DMEM medium with 10% FBS in 6-well plates and incubated for 2 weeks. Clones were stained with 0.04% crystal violet and photographed.

Copy numbers and protein expression were compared using Student’s t-tests and analysis of variance. P < 0.01 was considered having statistically significant difference. A receiver operating characteristic (ROC) curve analysis was used to evaluate the diagnostic capabilities of HPV copy number and HMGA2 copy number and protein expression. The maximum values of Youden’s index were used as the optimum cutoff values in the evaluation of these potential diagnostic biomarkers.