Copyright: © 2020 Ma et al. This is an open access article distributed under the terms of the Creative Commons Attribution License (CC BY 3.0), which permits unrestricted use, distribution, and reproduction in any medium, provided the original author and source are credited.

Objective: In this study, we collected samples from postmenopausal women aged >60 y and evaluated bone mineral density (BMD) in addition to other biochemical variables to evaluate risk factors for osteoporosis. Furthermore, we investigated whether an association exists between the CpG island methylation levels in the promoter region of the TBC1D8 gene and osteoporosis incidence. Our goal was to identify contributing factors to the pathogenesis of osteoporosis and provide a theoretical basis for osteoporosis testing and therapy.

Osteoporosis is a metabolic bone disease characterized by increased bone strength and increased risk for fracture. Osteoporosis is classified as either primary or secondary. Primary osteoporosis occurs in people of all ages, but most commonly in postmenopausal women and elderly men. By contrast, secondary osteoporosis occurs in response to drugs, other diseases and additional factors [1]. Osteoporosis often causes pain in the back, shortening of the body length, kyphosis, and decreased respiratory function. Patients may experience osteoporotic fractures, which not only cause physical and mental anguish but also increase economic burden. At present, osteoporosis, diabetes and cardiovascular disease are considered the three major pathologies in the elderly by the World Health Organization (WHO).

In studies of osteoporosis, increasing attention is focused on genomics. So far, more than 100 osteoporosis-related genes have been identified. Recently, some findings have demonstrated that polymorphisms in the estrogen receptor (ER) [2, 3], type I collagen (COL1) [4–6], vitamin D receptor [7, 8], and low density lipoprotein receptor-related protein 5 (LRP5) [9, 10] genes are highly associated with osteoporosis. TBC1D8 is a member of the human protein molecular activity regulation genes and is an activator of the GTP enzyme. A genome wide study combining the Framingham Osteoporosis Study that contained 7633 Caucasian women and 3657 men revealed that 2q 11.2 of TBC1D8 is a novel susceptibility loci for osteoporosis related traits [11]. Studies on single nucleotide polymorphisms in osteoporosis are relatively abundant; however, epigenetic studies examining osteoporosis are few in number. Gene methylation is a reversible chemical modification of DNA that occurs in binuclear sites of CpG islands. Methylation of CpG islands inhibits RNA polymerase or binding of interfering transcription factors to the gene gap, resulting in suppression of gene expression [12]. One study found that there were significant differences in genome wide methylation in bone cells from the femoral head region of patients with osteoporotic hip fracture and hip osteoarthritis [13]. Another article demonstrated that the methylation levels of Alu sequences are associated with the risk of osteoporosis in postmenopausal women [14]. These findings all suggest that gene methylation may be indirectly associated with osteoporosis.

As mentioned above, the TBC1D8 gene has been recently discovered to have a correlation with osteoporosis. TBC1D8 is a GTPase activator and small GTPase. As a class of single molecule proteins belonging to the GTPase superfamily, they modulate osteoclast proliferation, differentiation, and survival downstream of M-CSF and RANKL signaling [15]. In addition, small GTPases play significant roles in the nitrogenous bisphosphonates pathway to inhibit bone resorption that occurs through impaired protein prenylation [16, 17]. To our knowledge, an association between TBC1D8 gene methylation and osteoporosis has yet to be examined. We conducted this study to further study the potential pathogenic mechanisms of osteoporosis.

We collected data from 226 Han women aged > 60 years. Among participants, we discovered 38 patients with osteoporosis, a prevalence rate of 16.8% in the cohort. At final count, 30 osteoporosis cases were conclusively identified after excluding individuals with incomplete data. To maintain a 1:1 ratio, we chose age-matched healthy controls from the participants. The clinical characteristics of these subjects are shown in Table 1. There were no significant differences with respect to age, menopause age, history of fracture, regular intake of calcium supplements, alcohol intake, afternoon naps and insomnia. In addition, all participants in the osteoporosis and control groups had no history of smoking. However, we found significant differences in BMI, exercise time and sleep duration between osteoporosis and control cases. Individuals in the osteoporosis group had lower BMI compared with those in the control group. Individuals with osteoporosis exercised for < 30 min, yet most control cases exercised for 30-60 min. For sleep duration, osteoporosis participants were concentrated in two ranges, < 6 h or >7 h, in contrast with control cases, who were mainly in the 6-7 h range.

Table 1: Contrast of clinical characteristics in osteoporosis and control groups

Figure 1: Distribution of CpG island methylation in the promoter region of TBC1D8 in the osteoporosis group.

Figure 2: Distribution of CpG island methylation in the promoter region of TBC1D8 in the control group. 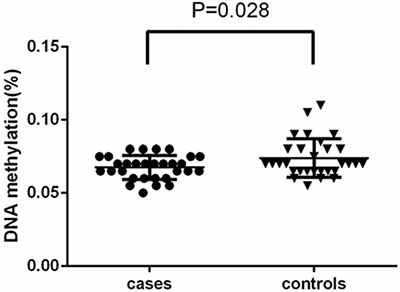 Figure 3: Comparison of the average methylation levels of CpG islands in the promoter region of TBC1D8 in osteoporosis and control groups 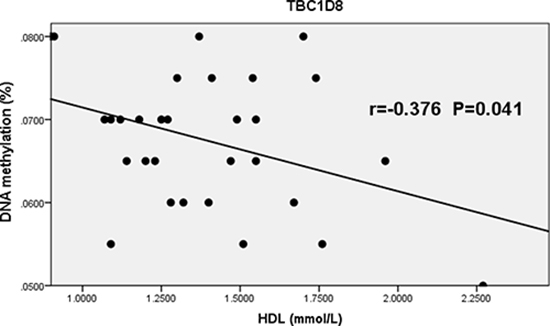 Figure 4: Correlation between the average methylation levels of CpG islands in the promoter region of TBC1D8 and HDL in osteoporosis.

The outcomes of this study demonstrate that participants in the osteoporosis group exhibited both lower BMI and shorter exercise times. Meta-analyses indicated that those with a BMI of 20 Kg/cm2 had a 95% increased risk of fracture compared to those with a BMI of 25Kg/cm2. Moreover, individuals with a BMI of 30Kg/cm2 had a 17% reduced risk of fracture compared to those with a BMI of 25 Kg/cm2 [18]. In addition, a lower BMI increased the risk of fracture in postmenopausal women. Studies indicated that the BMI per unit reduction was 1Kg/cm2, correlating to a 1.1-1.4 times increased risk of fracture [19, 20]. This BMI was indirectly associated with osteoporosis, and lower BMI negatively affected bone health. Albala et al. found that obesity was a protective factor for osteoporosis and that it reduced hormone binding globulin, increasing the level of free sex hormones. However, adjusted for the level of serum free sex hormones, obesity was directly correlated with BMD [21]. In addition, we observed that exercise was protective against osteoporosis, a result that is consistent with other findings [22]. With respect to sleep duration, participants in the control group averaged 6–7 hours of sleep per night and < 6 hours, but osteoporosis patients fell into two ranges, <6 hours or >7 hours. A previous study demonstrated that a long sleep duration may increase the risk for osteoporosis [23]. Our outcomes showed that more individuals in the osteoporosis group slept for longer periods of time (>7 h) compared with those in the control group. However, we also found that, compared with control group, a few of people in osteoporosis group also slept for a short time (<6 h), possibly because we included a limited number of participants.

There were significant differences between the osteoporosis and control groups regarding the comparison of BMD between L1-L4, the neck of the femur, and total hip. BMD in the osteoporosis group was statistically lower than in the control group. With respect to biochemical variables, individuals in the osteoporosis group had higher creatinine levels and thus higher eGFR levels compared with controls. Serum creatinine is an important indicator of renal function. The relationship between serum creatinine and osteoporosis is primarily manifested in the reduction of renal absorption, which can cause bone loss [24, 25]. Additionally, our results demonstrated that participants with osteoporosis had higher PTH, β-CTX, P1NP, and lower 25(OH)D, consistent with previous studies [26, 27]. PTH is a peptide hormone secreted by parathyroid glands that promotes intestinal calcium absorption and renal calcium reabsorption. Bone calcium stimulates osteoblast- and osteoclast-mediated release regulates calcium ion concentration in the body at a normal level. Research has shown that 25(OH)D is correlated with BMD [27, 28]; however, additional studies have also found that 25 (OH) D has no correlation with BMD [29, 30]. Generally speaking, our study found significant difference in the creatinine, eGFR, PTH, β-CTX and 25(OH)D levels between the osteoporosis and control groups.

To our knowledge, the TBC1D8 gene has not been previously examined with respect to osteoporosis. It is a member of the human regulatory protein gene and a GTP activating factor. The Rho-GTP enzyme, which belongs to the GTP enzyme family, is a signal transduction molecule required for the maintenance of the cytoskeleton and formation of the fold edge, and activation of the Rho-GTP enzyme can increase osteoclast activity [36]. A genome wide analysis found that the TBC1D8 gene is closely associated with osteoporosis [11]. We found that the methylation level of the promoter region CpG islands in the TBC1D8 gene was significantly lower in those with osteoporosis compared to controls. With elevated methylation levels of TBC1D8, the GTP enzyme was activated to enhance osteoclast activity, resulting in osteoporosis. Zoledronic acid, a drug known to treat osteoporosis, inactivates the GTP enzyme by inhibition of cholesterol and lipid synthesis, inhibiting apoptosis of osteoclasts. TBC1D8 may participant in this regulation, but the specific mechanism remains unknown.

We conducted correlation analyses between gene methylation and biochemical variables/BMD. As shown in Table 3, we found that the methylation level of CpG islands in the promoter region showed a negative linear correlation with HDL in the osteoporosis group. However, the correlation was not reflected in LDL, nor in other factors. As mentioned before, the pharmacological mechanism of zoledronic acid occurs via inhibition of cholesterol and synthesis of diallyl lipids to inactivate the GTP enzyme and inhibit osteoclasts. TBC1D8 is an activated factor of the GTP enzyme, suggesting that TBC1D8 may be associated with lipoprotein. In addition, statins were found to be a protective factor for osteoporosis [37], consistent with our results. Further experiments are needed to determine specific mechanisms of these findings.

We used questionnaires to collect data from Han Chinese women aged >60 years in two communities (Zhen-Ming community and Ying-Feng community, Haishu District, Ningbo). The questionnaire included age, age of menopause, hypertension history, diabetes history, fracture history, frequency of calcium intake, and history of smoking and drinking. No participants had metabolic diseases or a history of taking medications that affect bone metabolism. Ethics approval was obtained from the Ethics Committee of Ningbo First Hospital, China. The methods in this study were in accordance with relevant guidelines and the Declaration of Helsinki. All participants provided informed consent.

All statistical analyses were performed using the SPSS package (version 22.0) or Graghpad software (version 6.0). T-tests on two independent samples were used to investigate the differences of the TBC1D8 CpG island methylation levels between cases and controls. Linear regression was used to evaluate the association between the TBC1D8 CpG island methylation levels and biochemical variables in the cases and controls, respectively.

Qian-Qian Ma and Lv Lin conducted the experiments, Qian-Qian Ma, Lv Lin and Jing-Bo Yu contributed to all sections (study concept and design, sample collection, data analysis and interpretation, and drafting the manuscript). Yan Hu took responsibility for BMD testing and the accuracy of the data analysis. Qi Yao and Jun Yang contributed to the study conduct and data acquisition.

Thanks are due to Stem Cell Laboratory of Ningbo First Hospital for assistance with the experiments and to Jia-Pei Wang for valuable discussion. This study was funded by Ningbo Science and Technology Projects (2015C50031).

The authors declare that we have no conflicts of interests.