Lung cancer is the leading cause of cancer-related death worldwide [1, 2]. Non-small-cell lung cancer (NSCLC) is the dominant subtype in all clinical cases [3]. Patients with NSCLC are usually diagnosed in advanced stages, leaving the surgical operation frequently as an off-the-table option [4]. Chemotherapy and radiotherapy are the common treatments for NSCLC patients [5]. Despite significance advances in NSCLC pathogenesis and development of novel therapeutics such as targeted therapy and immunotherapy, the overall 5-year survival rate of NSCLC patients is still far less from satisfied [6–8].

If doable, surgery is the best choice for NSCLC because it provides the patients with most likelihood of cure and long-term survival [9]. Surgical operation is the primary treatment for patients with stage I and II lung cancer and an important approach in multimodality treatment for patients with stages III or with stage IV oligo-metastatic cases [10]. However, postoperative complications are critical challenges in clinical practice for NSCLC patients [11]. The most frequently observed postoperative complication is pulmonary infection that portends poor NSCLC prognosis [12]. Consequently, the long-term survival after surgery of lung cancer patients remains less than 50%, mostly due to the tumor recurrence [13].

Interleukin 33 (IL-33) is one new member of IL-1 superfamily and expressed in various tissues, especially in those with barrier functions [18, 19]. By binding to its receptor ST2, IL-33 drives production of Th2 cytokines and plays a critical role in asthma, inflammation and autoimmunity [20–23]. Recently, IL-33 in circulation was defined as a biomarker for evaluating lung cancer progression [24]. IL-33 was identified as a pro-cancer cytokine and fueled the glycolysis of NSCLC cells [25]. But whether IL-33 is involved in the crosstalk of gram-negative bacterial infection and NSCLC progression, still remains unknown. 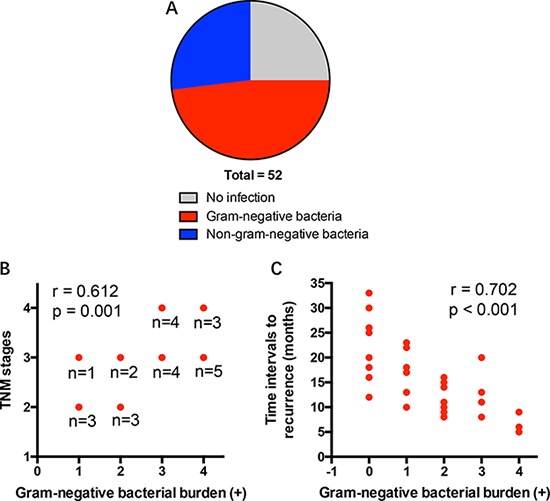 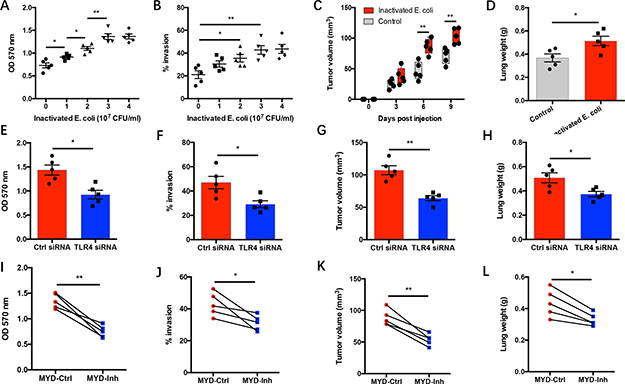 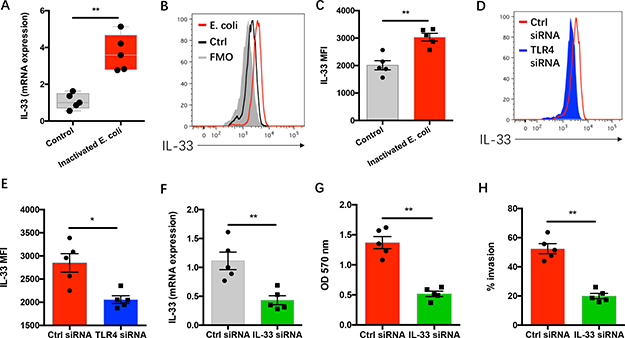 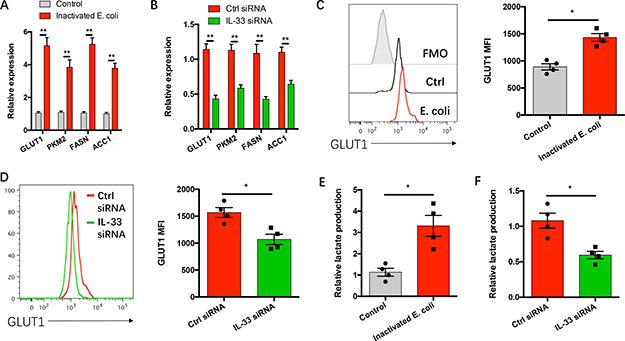 Cancer stem cells (CSCs) are well-acknowledged as a niche of cancer cells that are endowed with stem cell properties, chemotherapy resistant, hardly eradicated by clinical management and thus lead to tumor recurrence [27, 28]. Incubation with gram-negative bacteria increased the expressions of CSC-related genes including CD133, CD44, CD166 and ALDH1A1 (Figure 5A). This process was dependent on TLR4 signaling and IL-33 expression in NSCLC cells and could be abrogated by knockdown of TLR4 and IL-33 expressions (Figure 5B–5C). In support, gram-negative bacteria significantly enhanced the mammosphere formation through TLR4 activation and IL-33 upregulation in NSCLC cells (Figure 5D–5F). 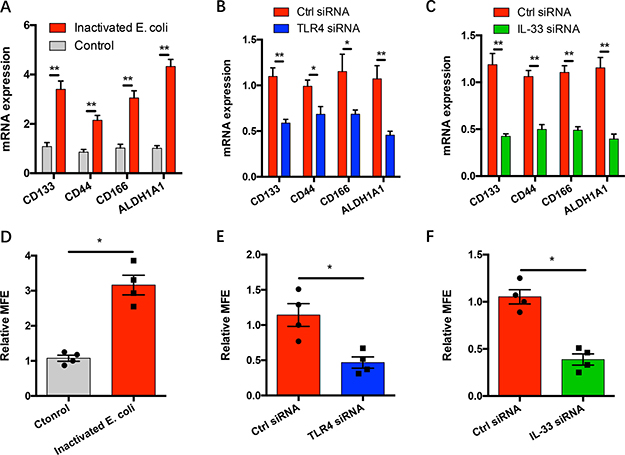 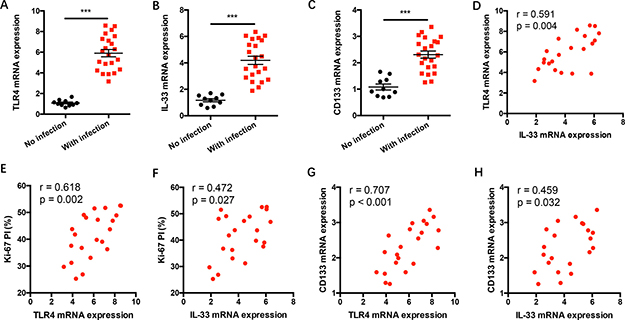 Toll-like receptors are pattern recognition receptors that recognize pathogen-associated molecular patterns, a crucial protective mechanism in innate immunity and human diseases [30, 31]. Accumulating evidence have demonstrated an important function of TLR signaling in lung cancer pathogenesis [32, 33]. As such, activation of TLR4 or TLR9 enhanced growth and metastasis of lung cancer [34–37]. Triggering of TLR7 and TLR8 expressed by human lung cancer cells induced cell survival and chemo-resistance [38]. In current study, we determined that blockade of TLR4 signaling efficiently abrogated gram-negative bacteria mediated NSCLC progression. In consistent, gram-negative bacteria activated TLR4 in NSCLC cells, promoting tumor growth and metastasis [16, 17]. It is reasonable because lipopolysaccharides, the major component of the outer membrane of gram-negative bacteria, is a well-known ligand for TLR4 [35, 39].

IL-33 production could be induced by TLR agonists in IRF3 dependent manner [54]. TLR4 activation upregulated IL-33 expression in bone marrow-derived dendritic cells, alveolar macrophages, and respiratory dendritic cells [55]. TLR4 activation by short ragweed pollen led to IL-33 mRNA and protein expression in MyD88 and NF-kB dependent manner in ocular surface, cervical lymph nodes and isolated CD4 T cells of BALB/c mice [56]. Cyclic stretch activated TLR4 signaling to induce IL-33 production through HMGB1 in murine respiratory epithelial cells [57]. On the other hand, IL-33 increased the expression of the LPS receptor components MD2 and TLR4, the soluble form of CD14 and the MyD88 adaptor molecule, enhancing the LPS-induced pro-inflammatory response in macrophage [58]. Combing these findings indicate a positive feedback loop for TLR4/IL-33 pathway. Herein, we showed that gram-negative bacteria stimulation resulted in up-regulation of IL-33 expression in NSCLC cells and this process could be inhibited by TLR4 knockdown. Considering the aberrant expression of IRF3 in human lung cancer and the crucial role of NF-kB activity in lung cancer carcinogenesis [59, 60], the mechanisms underlie TLR4-induced IL-33 expression in NSCLC cells might involve IRF3 and NF-kB pathway, as well as HMGB1 since it binds to LPS to facilitate LPS transfer and initiate TLR4 signaling [61].

It should be pointed out that plasma IL-33 levels could be inversely associated with progression of lung cancer [62]. IL-33 was reported to enhance programmed oncosis of ST2L-positive low-metastatic Lewis lung carcinoma [63]. Tumoral expression of IL-33 could inhibit tumor growth and modify tumor microenvironment through CD8 T and NK cells in mice bearing B16 cells and 4T1 cells [64]. IL-33 could restrict tumor growth and inhibit pulmonary metastasis in melanoma-bearing mice through eosinophils [65]. Systemic administration of recombinant IL-33 protein could inhibit growth of established tumors in transplant and de novo melanoma tumorigenesis models through inducing CD8 T cell expansion and IFN-γ production, as well as through restoring dendritic cell activation and maturation [66]. These studies suggest an anti-cancer activity of IL-33 in tumor immunity, reflecting a complexity of IL-33 in cancer pathogenesis. These conflicting phenomena might due to distinct types of cancer and different cohorts of clinical patients. Clinical therapeutics such as radiotherapy and chemotherapy could induce IL-33 expressions in tumor tissue of clinical patients [67, 68], suggesting clinical managements as critical factors in determining IL-33 expressions. Besides, research findings from established cancer cell lines could be different with those from primary cancer cells in clinical patients. We propose tumoral IL-33 expression and its function in tumor progression as an individualized element to be considered in lung cancer patients.

A cohort of 121 patients diagnosed with NSCLC was enrolled in this study. Surgical tissues and clinical parameters were collected after written consent form was obtained. The NSCLC patients were forty-one to eighty-three years old. Fifty-eight patients were males and eighty-one cases were adenocarcinoma. The burden of infected gram-negative bacteria was from medical laboratory. Ki-67 proliferation index was from pathology division. Experiments were performed in accordance with the 1964 Helsinki declaration including its later amendments and approved by Jilin Institutional Ethics Committee.

Heat-inactivation of gram-negative bacteria Escherichia coli (ATCC® 11775™) was performed as previously described [16, 17]. Human TLR4 siRNA, IL-33 siRNA and the controls were from Santa Cruz Biotechnology. MyD88 inhibitory peptide and control peptide were from In vivo Gen. Cellular Nucleofector™ kit was from Lonza. All reagents were used according to the manufactures’ instructions.

NSCLC cells were seeded at 1×105 cells/ml at ultralow attachment plates and cultured for 7 days. MS with a diameter ≥ 50μm were counted and MS-forming efficiency (MFE) was calculated by dividing the number of MS with original number of seeded cells [52].

In vitro growth capacity of NSCLC cells was determined with MTT assay [16, 25]. Briefly, 10 thousand cells were incubated with or without heat-inactivated E. coli for 72 hours and detected for proliferative expansion with MTT cell proliferation kit (Cayman Chemical) according to the manufacturer’s instructions.

In vitro invasion of NSCLC cells was detected using Corning® BioCoat™ Matrigel® Invasion Chambers [16, 25]. 0.1 million NSCLC cells suspended in 0.5 mL of serum-free culture medium were seeded onto the upper chamber of the Matrigel inserts. Complete culture medium containing 10% FBS was placed into the lower chambers. 24 hours later, invading cells on the lower side of the chamber were fixed, stained and counted under microscope. Data is expressed as the percent invasion through the Matrigel inserts relative to the control inserts.

Tumor growth in vivo was performed in NOD-SCID mice as previously described [16, 25, 34, 35]. Briefly, 5 million NSCLC cells were pretreated with or without heat-inactivated E. coli for 24 hours and subcutaneously injected into NOD-SCID mice. Tumor growth was determined by measuring the tumor size with digital calipers. NSCLC cells that failed in tumorigenesis were excluded from the study.

Tumor metastasis in vivo was performed in NOD-SCID mice according to previously described method [25, 70–72]. NOD-SCID mice were intratracheally challenged with LPS (10 μg/mouse, Sigma) and injected with 1 million NSCLC cells through the tail veins after 6 hours. Tumor metastasis was determined by lung weight to reflect the tumor burden at 14th day post NSCLC injection.

This work was supported by grants from National Natural Science Foundation of China (81300186 and 81301035). The funding has no involvement in study design, data collection, data interpretation and manuscript written.