The purpose of this part of the meta-analysis was to summarize data regarding associations between minimum apparent diffusion coefficient (ADCmin) and KI 67 in different tumors.

Apparent diffusion coefficient (ADC) is a quantitative parameter of water diffusion in tissues [1]. Previously, numerous studies investigated associations between ADC and several histopathological features in different tumors [2–5]. Some reports indicated that ADC can predict proliferation activity and, therefore, behavior of several malignancies [2, 3, 5]. As already mentioned, ADC can be divided into three sub-parameters: ADC minimum or ADCmin, mean ADC or ADCmean and ADC maximum or ADCmax [5]. As shown in the part 1 of this meta-analysis, several tumors showed different inverse correlations between ADCmean and KI 67 [6]. Overall, the calculated correlation coefficients ranged from –0.22 in breast cancer to –0.62 in ovarian cancer [6].

There were studies, which showed that ADCmin had stronger correlations with KI 67, and can better reflect proliferation potential of malignant lesions [7, 8]. However, the reported data were based on small number of investigated tumors/patients.

The purpose of this part of the meta-analysis was to provide evident data regarding associations between minimum ADC (ADCmin), and KI 67 in different tumors.

Overall, the identified 22 studies [7–28] contained data about associations between ADCmin and KI 67 for 944 patients (Table 1). 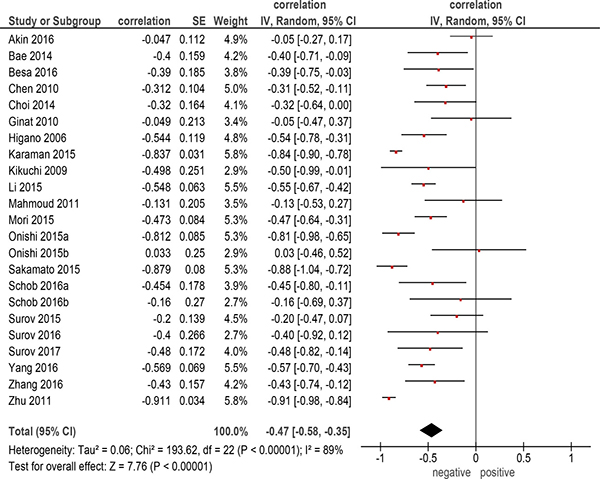 Figure 1: Forest plots of correlation coefficients between ADCmin and KI 67 in all included studies (n = 22). 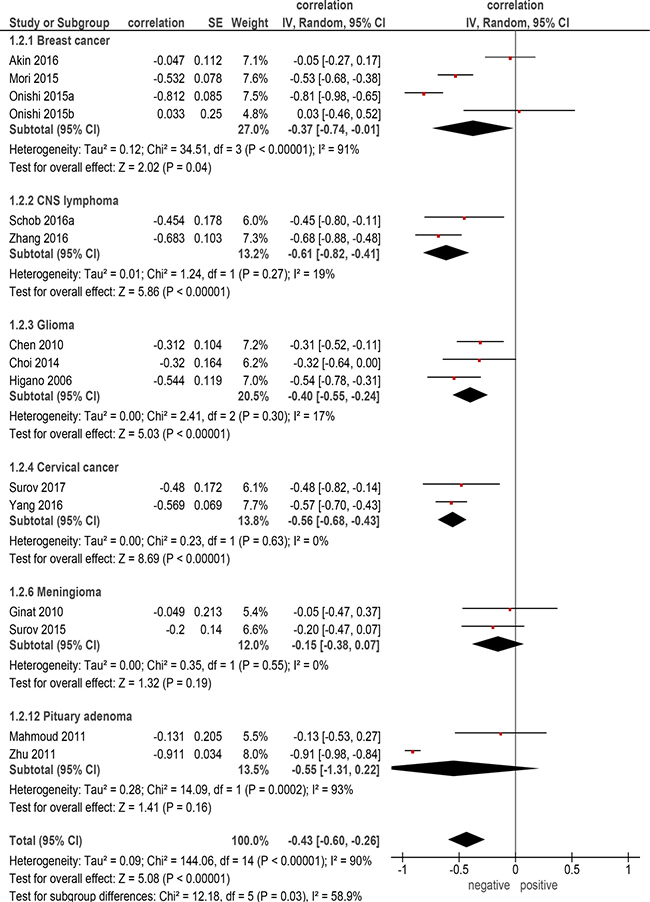 Previously, some investigations focused on relationships between ADC and histopathology, such as cell count and/or proliferation potential, in several tumors [2, 5]. However, the reported data were inconsistent: while some authors mentioned that ADC fractions can be associated with cellularity and KI 67, others did not confirm this finding [5, 7, 8]. Our previous meta-analysis regarding correlation between ADCmean and tumor cellularity showed that several tumors have different associations between the investigated parameters [29]. In detail, the calculated correlation coefficients ranged significantly and were as follows: ρ = –0.25 in lymphoma, ρ = –0.45 in meningioma, ρ = –0.48 in breast cancer, ρ = –0.53 in renal cell carcinoma, ρ = –0.53 in head and neck squamous cell carcinoma, ρ = –0.56 in prostatic cancer, ρ = –0.57 in uterine cervical cancer, ρ = –0.63 in lung cancer, ρ = –0.64 in ovarian cancer, and ρ = –0.66 in glioma [29]. Almost similar results were also identified for associations between ADCmean and KI 67 in the part 1 of the present work [6]. Because of these findings it can be postulated that ADCmean does not reflect cellularity and proliferation potential in all tumors and tumor-like lesions as assumed previously.

According to some authors, another ADC parameter, namely ADCmin has been reported to be more sensitive in prediction of cell count and proliferation activity than ADCmean [2, 7, 8]. However, a recent meta-analysis showed that ADCmin did not better correlate with tumor cellularity than ADCmean [30].

The exact cause of our findings is unclear. They supported previous suggestions that different ADC fractions reflect different histopathological features [2]. Obviously, there is no general rule regarding ADC parameters and tumor proliferation, i.e. for some tumors ADCmin and for other ADCmean predicts better proliferation potential.

Also for this part of the meta-analysis, already the mentioned limitations [6] do apply: only 6 named above tumor entities were involved into the work. For other malignancies and tumor-like lesions no data could be provided. In addition, the number of patients in the groups of pituitary adenoma, cerebral lymphoma, and meningioma was very small that questions the validity of the estimated correlation coefficients.

In conclusion, there are different inverse correlations between ADCmin and KI 67 in several tumors. In comparison with ADCmean, ADCmin seems to correlate better with proliferation activity in breast cancer, cerebral lymphoma, and pituitary adenoma.

In meningioma and glioma, however, ADCmean reflects better tumor proliferation than ADCmin.

The search strategy and data acquisition are described precisely in the part 1 of the meta-analysis [6]. For this part, only data regarding associations between ADCmin derived from diffusion weighted imaging (DWI) and expression of KI 67 in different tumors and tumor-like lesions were collected. The Preferred Reporting Items for Systematic Reviews and Meta-Analyses statement (PRISMA) was used for the research [31].

Overall, 22 studies were included into the present analysis [7–28]. The following data were extracted from the literature: authors, year of publication, number of patients, tumor type, and correlation coefficients.

The methodological quality of the 23 studies was independently checked by two observers (A.S. and H.J.M.) using the Quality Assessment of Diagnostic Studies (QUADAS) instrument according to previous descriptions [32, 33]. The results of QUADAS proving is given in Table 3.

Table 3: Methodological quality of the involved 23 studies according to the QUADAS criteria

The meta-analysis was undertaken by using RevMan 5.3 (Computer program, version 5.3. Copenhagen: The Nordic Cochrane Centre, The Cochrane Collaboration, 2014). Heterogeneity was calculated by means of the inconsistency index I² [35, 36]. In a subgroup analysis, studies were stratified by tumor type. Furthermore, DerSimonian and Laird random-effects models with inverse-variance weights were used without any further correction [37].