Materials and Methods: We retrospectively analysed 415 patients who underwent RNU for upper tract urothelial carcinoma at four hospitals between January 1995 and February 2017. All patients had regular follow-up examinations after RNU including urine cytology, blood biochemical tests, and computed tomography. We investigated the first site and date of tumor recurrence. Overall survivals of patients who developed recurrence, stratified by mode of recurrence (asymptomatic vs. symptomatic group), were estimated using the Kaplan–Meier method with the log–rank test. Cox proportional hazards regression analysis was performed using inverse probability of treatment weighting (IPTW) to evaluate the impact of the mode of recurrence on survival.

Conclusions: Routine oncological follow-up for detection of asymptomatic recurrence contributes to a better prognosis after RNU.

Upper tract urothelial carcinoma (UTUC) is a relatively rare disease, and prognosis of patients with advanced UTUC has not improved over the past two decades [1, 2]. Radical nephroureterectomy with bladder cuff excision (RNU) remains the standard treatment modality for UTUC patients, and regular oncological surveillance after RNU is necessary. The rationale for regular oncological surveillance is to detect tumor recurrence at an early stage so that it can be cured or at least treated with a better prognosis. The impact of regular surveillance on the long-term prognosis has been investigated in the context of several malignancies. However, most studies found no survival benefit accruing from regular follow-up of patients with colorectal [3, 4], breast [5], endometrial [6], and lung cancers [7]. Similarly, the impact of regular surveillance on prognosis continues to be debated in urinary bladder cancer. Till date, only five studies have investigated the benefit of routine oncological follow-up; their conclusions suggest the benefit of routine oncological follow-up [8–12]. However, due to the lack of robust evidences, it remains controversial. In UTUC, there is no evidence to prove if routine oncological follow-up after RNU to detect asymptomatic recurrence improves patient survival. Because a prospective randomized study to clarify this issue is not feasible, use of statistical methods, to eliminate the confounding influences introduced by nonrandom treatment assignment in retrospective studies, is a key imperative. In this study, we compared the impact of mode of diagnosis (asymptomatic vs. symptomatic) of recurrence on patient survival after RNU and survival after recurrence, using an inverse probability of treatment weighting (IPTW) strategy. 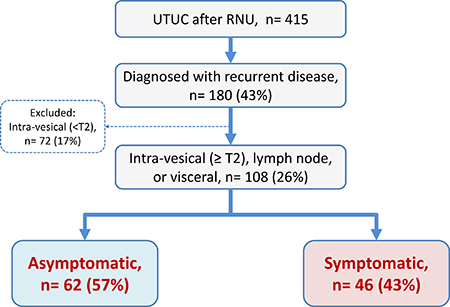 Figure 1: Patient selection. Of 108 patients with disease recurrence, 62 (57%) were detected during regular follow-up examinations in an asymptomatic state, whereas in 46 (43%) patients, recurrence was detected by symptom-driven examinations. 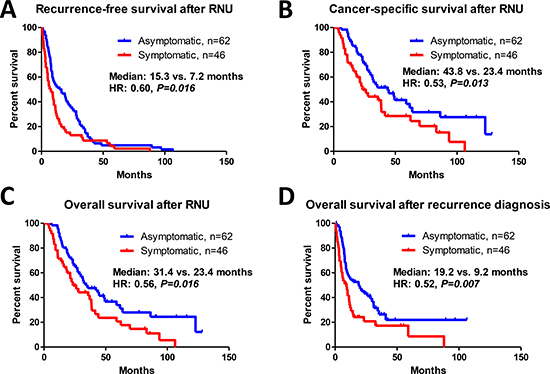 Yafi et al. proposed a stage-based protocol for the surveillance of patients after radical cystectomy [13]. Their extensive examination of recurrence patterns in a large multi-institutional project emphasizes the need for earlier strict surveillance in patients with high-risk diseases. Optimal schedule and risk stratification are necessary to clarify the efficacy of routine oncological surveillance and to limit over-investigation of patients with urothelial carcinoma. We recently reported risk stratification-based surveillance protocol after radical cystectomy that improves cost effectiveness [14, 15]. In addition, our recent study suggested preoperative impaired renal function had significant impact of poor prognosis in the patients with UTUC [16]. Therefore, utility of regular follow-up examinations after surgery is next question need to address. Our next study will address the risk-based optimal surveillance protocol after RNU.

The present study had several limitations. First, it was a retrospective study with a small number of patients who developed recurrence. We could not control all variables including selection bias, the influence of lead-time bias, and other unmeasurable confounding factors. In addition, there were strong historical biases for the indication of NAC in the present study because we started NAC for UTUC after 2010. Although our previous study suggested clinical benefit of NAC for UTUC [17], no prospective study is available to reveal the benefit of NAC on mode of recurrences. Therefore, accumulation of evidence from well-planned studies is essential. Second, our results cannot be applied to other nations because the entire Japanese population is covered by universal health insurance (maximum copayment from 10% to 30%). Despite these limitations, this is the first study to investigate the clinical benefit of routine oncological follow-up after RNU. Our results support the idea that an effective follow-up protocol following curative surgery should detect recurrence in the early stages of the disease and that detection with asymptomatic recurrence should secure sufficient time to implement a multimodal therapy after relapse.

In conclusion, routine oncological follow-up for the detection of asymptomatic recurrence may potentially improve the prognosis of patients after RNU. Further investigation with a well-designed study is necessary to assess the survival benefit of a surveillance protocol for patients with UTUC.

This retrospective study was performed in accordance with the ethical standards of the Declaration of Helsinki and approved by the Ethics Committee at the Hirosaki University School of Medicine (authorization numbers: 2015–258 and 2016–225). The study participants provided their verbal informed consent, which was recorded in their medical charts. Pursuant to the provisions of the ethics committee and the ethical guidelines in Japan, written consent was not required for public disclosure of study-related information, such as that from the existing documentation, in the case of a retrospective and/or observational study.

Since September 2006, we have treated selected patients with two to four courses of NAC in advanced (cT3-4 and/or cN+) cases [17]. NAC is a platinum-based combination regimen comprising of either gemcitabine plus cisplatin (GCis), gemcitabine plus carboplatin (GCarbo), or methotrexate, vinblastine, adriamycin, and cisplatin (MVAC). Regimens were selected based on guidelines for the proper use of cisplatin [21] and on the patient’s overall status.

Open or laparoscopic nephroureterectomy, which includes the removal of kidney, ureter, and ipsilateral bladder cuff excision, was performed [22]. The distal ureter was managed by the extravesical approach. A non-template-based regional lymph node dissection was performed. Postoperative complications were reviewed using the Clavien–Dindo classification.

Disease recurrence was classified based on the involved site such as lymph nodes, visceral organs, local recurrence in the pelvis, bone, urothelium, or brain. Non-invasive, superficial urothelial recurrences were excluded from the present study. Lymph node recurrence included metastasis to local recurrence, para-aortic, thoracic, mediastinal, and paratracheal lymph nodes. Visceral organ recurrence included metastasis to the liver, lungs, adrenal glands, and other intra-abdominal organs. The first recurrence after RNU was recorded. We also analyzed whether the first tumor recurrence was detected solely based on imaging findings during the scheduled follow-up investigations in asymptomatic patients or whether the recurrence was diagnosed by symptom-driven investigations. The vital status was determined from death certificates or from physician’s correspondence.

Adjuvant chemotherapy and/or radiotherapy were not routinely administered. Salvage therapy was indicated only when a visible tumor was identified. Systemic chemotherapy after recurrence consisted of a platinum-based combination regimen, including GCis, GCarbo, GCD (gemcitabine, carboplatin and docetaxel), DIN (docetaxel, ifosfamide, and nedaplatin), or MVAC. Regimens were selected based on residual renal function and the patient’s overall status.

Statistical analyses were performed using SPSS version 24.0 (SPSS Inc., Chicago, IL, USA), GraphPad Prism 5.03 (GraphPad Software, San Diego, CA, USA), and R 3.3.2 (The R Foundation for Statistical Computing, Vienna, Austria). Categorical variables were compared using Fisher’s exact test or Chi-squared test. Between-group differences with respect to normally distributed variables were assessed using Student’s t-test; those with respect to non-normally distributed variables were assessed using Mann–Whitney U test. All tests were two-sided and a P value < 0.05 was considered statistically significant. Overall survival in the asymptomatic and symptomatic groups were calculated as time from RNU to date of death, and time from first recurrence to death from any cause, respectively, using Kaplan-Meier method. Between-group difference in overall survival was assessed with log rank test. Cox proportional hazards regression models were used to evaluate the impact of the mode of diagnosis of recurrence on survival, and hazard ratios (HRs) with 95% confidence intervals were calculated. Due to the limited sample size, we performed a multivariate Cox proportional hazards regression analysis using IPTW, which reweighs both the affected and unaffected groups to generate a propensity score-matched population [25], to evaluate the impact of symptom recurrence on survival (overall survival since the RNU and since the recurrence diagnosis). Variables included in the IPTW analysis were age, sex, ECOG PS, smoking, CVD, DM, eGFR, tumor location, NAC, postoperative complication grade, pT, pN, LVI, surgical margin, and chemotherapy received after recurrence.