Associations between VDR gene polymorphisms and colorectal cancer susceptibility: an updated meta-analysis based on 39 case-control studies

Background: Recent studies have reported the associations between vitamin D receptor (VDR) polymorphisms and colorectal cancer (CRC), but the results were not always consistent. This meta-analysis aims to evaluate whether VDR polymorphisms are associated with CRC susceptibility.

Materials And Methods: Studies on the associations between VDR polymorphisms and CRC were retrieved from the Web of Science, PubMed, the Chinese Biomedical Database (CBM), Chinese National Knowledge Infrastructure (CNKI) and Wanfang (Chinese) databases. The odds ratio (OR) with 95% confidence intervals (CIs) was obtained.

Conclusions: This meta-analysis suggests that BsmI is associated with CRC risk and FokI might be a risk factor for CRC. However, these associations with CRC need further studied.

Colorectal cancer (CRC) is a major health problem and is currently ranked third for both cancer incidence and mortality [1]. In spite of the revised treatment patterns, CRC remains a major cause of cancer mortality. At an estimated 1.2 million new cancer cases and 608,700 deaths worldwide each year, people who die from CRC account for 8% of all cancer related deaths [2]. The incidence rate of CRC has been increasing greatly in China in the past few years, which accounts for about 6.5% of total cancers in urban areas and 4.6% in rural areas [3]. CRC is a multifactorial disease, involving the complex interactions between environmental and genetic factors [4]. However, the exact mechanisms which result in the development of colorectal cancer remain unclear. Nowadays, a large number of candidate genes responsible for the genesis of colorectal cancer have been identified. 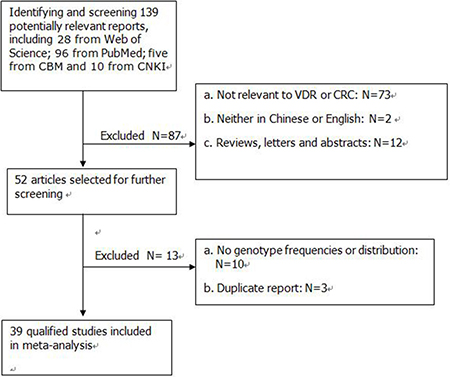 Funnel plot and Egger’s test were performed to evaluate the publication bias of literatures on CRC, and no statistically significant publication biases were found in all genetic models.

A total of 29 studies examined the association between CRC and the FokI polymorphism. The result of meta-analysis showed that the FokI polymorphism was on the fringe of statistically significant in the comparison of F allele vs. f allele in fixed model (OR = 1.029, 95%CI = 0.999–1.059, Praw = 0.057, PFDR = 0.057). The homozygous model, the dominant model and the recessive model were no significant associated with CRC risk (Table 2).

Table 2: Meta-analysis of the association between VDR polymorphisms and CRC 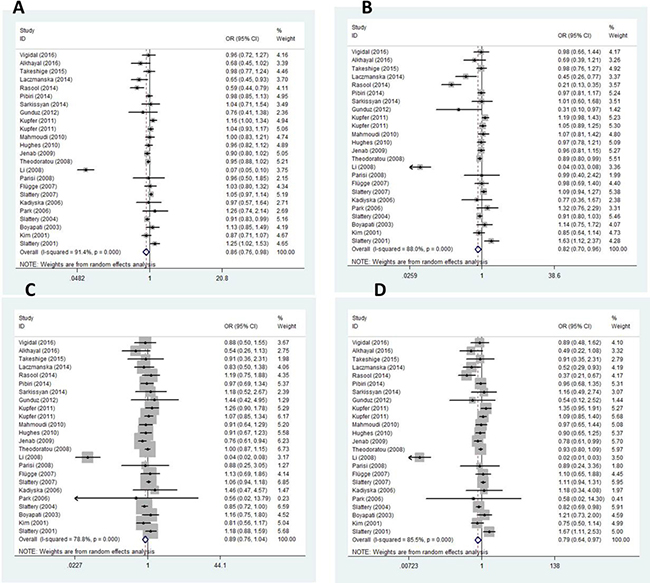 Other polymorphisms and CRC

Other three polymorphisms including ApaI, TaqI, Cdx2 were not associated with CRC in all genetic models.

Sensitivity analysis was performed by sequential omission of individual studies. The pooled ORs of the polymorphisms were not altered after omission, indicating that our results were statistically robust.

The pathogenesis of CRC remains unknown. Gene-environment interactions, gene-gene interactions and life-style have an important impact on the development of CRC. There is consistent epidemiologic evidence that increased vitamin D intake is associated with reduced risk of colorectal. VDR mediate the biological activity of vitamin D and plays a crucial role in the etiology and development of cancer. A number of genetic associations studies were carried out to investigate the association of VDR polymorphisms with CRC risk, but the results are conflictive and the effect of VDR polymorphisms on CRC remains unclear. Therefore, in order to overcome the limitations of individual studies, we performed meta-analysis to evaluate the associations of VDR polymorphisms with CRC risk. Meta-analysis increases statistical power and resolution by pooling the results of independent analyses. A total of 52 reports had predicted a potential genetic association, and only 39 articles were included in this meta-analysis based on the selection criteria. The meta-analysis showed that the FokI polymorphism was on the fringe of statistically significant in the comparisons of F vs. f (OR = 1.029, 95% CI = 0.999–1.059, Praw = 0.057, PFDR = 0.057) and the BsmI B allele was associated with a lower CRC risk (B vs. b: OR = 0.862, 95% CI = 0.761–0.976, Praw = 0.019, PFDR = 0.019). Similarly, a decreased CRC risk was also found in the homozygous model and the dominant model of BsmI (BB vs. bb: OR = 0.786, 95% CI = 0.636–0.972, Praw = 0.026, PFDR = 0.039; BB + Bb vs. bb: OR = 0.824, 95% CI = 0.705–0.964, Praw = 0.015, PFDR = 0.039, respectively). The results are consistent with the previous meta-analysis, which further confirmed the conclusions of the previous meta-analysis. However, our results were not consistent with the previous meta-analysis in the recessive model of BsmI and CRC. Yu et al. [3] and Bai et al. [51] draw the conclusion that the recessive model of BsmI was associated with a decreased CRC risk. The reasons for different results are as follows: first, our study is an updated and more carefully selected study than Yu et al and Bai et al. Second, our study included more Asian population. The estimated VDR polymorphisms including FokI, ApaI, TaqI and Cdx2 showed no significant associations between CRC. Previous meta-analysis’s pooled ORs were similar to ours. In addition, we found significant heterogeneities between studies in BsmI and ApaI. But the reasons for the heterogeneity were unclear. The heterogeneity may be explained by the following factors: the study design, clinical characteristics, year of publication, and especially the different genetic backgrounds.

As in any study, some limitations of this study should be considered. First, only published studies in English and Chinese were included in this meta-analysis, so publication bias may have occurred. Second, significant heterogeneity was observed in overall comparisons. Although no publication bias was observed, different background and variant adjusted factors of controls were possible major source of heterogeneity. Third, although environment and diet may partially contribute to CRC, gene-gene and gene-environment interactions could not be investigated. Fourth, meta-analysis was still an observational study that subjected to the methodological deficiencies of the included studies.

In conclusion, this meta-analysis suggests that BsmI was associated with CRC risk and FokI might be risk factors for CRC. However, these associations with CRC need further studied.

All genetic association studies that assessed the associations of the FokI, BsmI, ApaI, TaqI and Cdx2 polymorphisms in the VDR genes with CRC susceptibility were included/enrolled in the meta-analysis. The studies were identified by extended computer based search of The PubMed, Web of Science, the Chinese Biomedical Database (CBM) and Chinese National Knowledge Infrastructure (CNKI) and Wanfang (Chinese) databases (published until April 2017). The keywords “Colorectal cancer” or “CRC” or “Colorectal carcinoma” or “Colorectal tumor”, “polymorphism” or “variant” or “genes” or “genotypes” or “genotyping”, “vitamin D receptor” or “VDR” were used. All references cited in the publications were also reviewed to identify other relevant publications. Finally, only published studies with full text were included.

Regarding CRC susceptibility and VDR gene polymorphisms, studies which satisfy all the following criteria were identified: (1) articles investigate the associations of the FokI, BsmI, ApaI, TaqI and Cdx2 polymorphisms in the VDR genes with the development of CRC; (2) a case–control study; (3) articles reported the number of individual genotypes and/or alleles for VDR polymorphisms in cases and controls; (4) the paper should clearly describe CRC diagnoses; (5) the control’ ethnic background and geographic area were the same with case’; (6) the language of articles was restricted to English or Chinese; (7) full text was available. Exclusion criteria: (1) the study was conducted on animals; (2) abstracts, case reports, editorials and review articles were excluded; (3) studies that did not met the inclusion criteria; (4) study with no detailed data.

According to the selection criteria, data from relevant studies were carefully and independently extracted by two authors (Zhipeng Pan and Mengya Chen). Disagreement was resolved by discussion and consultation with the third researcher (Xingxing Hu). The following data were extracted if available: first author, year of publication, country, ethnicity of study population, the genotyping method, sample size, number of each genotype in cases and controls.

The strength of the associations between the VDR polymorphisms and CRC susceptibility were evaluated by Odds ratios (ORs) with 95% confidence intervals (95% CIs) under the appropriate genetic model. The pooled ORs were calculated for the allele contrasts, homozygous model, recessive genetic model and dominant genetic model. P value < 0.05 was considered to be statistically significant comparing CRC cases with controls. Considering the possibility of heterogeneity in the studies, heterogeneity assumption was measured by the chi-square based Q test (P < 0.1 indicates heterogeneity) [52]. In addition, the presence of heterogeneity between studies was tested by the I2. I2 values of 25, 50, and 75% are defined as low, moderate, and high estimates, respectively. The pooled effect was calculated by a fixed effect model when there is no heterogeneity (I2 < 50% or P > 0.1), otherwise, a random effects model was used. HWE was assessed by the Chi-square test in the control group of each study in all the included studies (P < 0.05 was considered significant). The funnel plot and Egger’s regression test were used to search for publication bias, and an asymmetric Funnel plot or P < 0.05 in Egger weighted regression suggested possible publication bias. In consideration of multiple comparisons, Benjamini–Hochberg (BH) method was applied to control the false discovery rate (FDR). All the statistical manipulations were performed using the STATA statistical software 11.0 (StataCorp, College Station, TX, USA) and Review Manager Software 5.1 (Cochrane Collaboration, Oxford, UK). All P values tested were two-tailed.

Thanks for the people who participated in this study.