Materials and Methods: PubMed, Cochrane Central Register of Controlled Trials, Embase, Web of Science, Chinese CNKI, and Wan Fang were searched up to 19th June 2017. Studies which investigated the STAT3 or phospho-STAT3 expression of patients with breast cancer on the basis of patient survival data or survival curve were eligible.

Signal transducer and activator of transcription 3 (STAT3), one of the seven-member STAT family of transcription factors, can be activated by tyrosine kinase signals and dimerized to phospho-STAT3 (p-STAT3) [1]. STAT3 and p-STAT3 are significantly associated with tumor development, migration, and incursion in cancer through angiogenesis and lymph-angiogenesis. STAT3 overexpression indicates poor prognosis in various malignancies, such as hepatic cancer, breast cancer, thyroid cancer, gastric cancer, and melanoma. Consequently, STAT3/p-STAT3 could accurately predict patient prognosis.

Included studies were those that (1) recruited patients with the histologic type of breast cancer; (2) measured the expression of STAT3 and p-STAT3 in tumor tissue by immunohistochemistry (IHC); (3) provided data concerning the correlation between STAT3/p-STAT3 expression and survival outcome or clinicopathological information, including tumor differentiation, TNM stages, lymph node metastasis, hazard ratio (HR), and their 95% confidence intervals (CI) or sufficient survival data; (4) used overlapping samples, from which the most complete ones were selected.

Exclusion criteria were (1) duplicate reports, ongoing studies, literature published as abstracts, letters, editorials, theoretical papers, reviews, and case reports; (2) studies on breast cancer cell lines and animal models but not based on human patients; (3) studies that assessed the effect of medication without reporting STAT3/p-STAT3 expression and breast cancer; (4) studies without sufficient survival data to obtain HR and 95% CI; (5) studies whose research methods and experimental design were apparently dissimilar from those of the selected studies.

Two investigators (LY, HJ) independently examined all literature searches to recognize eligible studies, abstracted data from all studies, and crosschecked data. Controversial problems were resolved by discussions between the two examiners. For each included study, we recorded baseline characteristics, histology, stage, grade, estrogen receptor (ER) and progesterone receptor (PR), human epidermal growth factor receptor 2 (HER2) status, cut-off value of positive expression, antibodies used for IHC, survival curves, and HRs and their 95% CIs and OS, DFS, or cancer-specific survival (CSS) rate. If the only obtainable data of HR and 95% CI were in the form of the survival curve, then Engauge Digitizer version 4.1 (downloaded from http://digitizer.sourceforge.net/) was used to read the graphical survival plot [5]. The Newcastle–Ottawa Scale criterion was used by the two reviewers to independently assess the quality of each included study [6]. Newcastle–Ottawa Scale mainly includes subject selection, subject comparability, and ascertainment of exposure risk. NOS scores ranged from 0 to 9, and a score ≥ 7 indicates as high-quality studies.

The time-to-event HR estimates were pooled into a summary HR by meta-analysis. Heterogeneity test of the individuals was evaluated with Cochrane Q test and the I2 statistic. Heterogeneity was presented as significant when I2 > 50% or p value of Q test < 0.1, and random-effects model was adopted if there was significant heterogeneity, otherwise, the fixed-effects model was adopted [7]. Galbraith plot was worked for the heterogeneity test. Furthermore, publication bias was measured using Egger’s linear regression test [8]. All statistical calculations were performed via Stata version 12.0 (Stata Corp, College Station, TX, USA). P < 0.05 was considered statistically significant [9–11]. 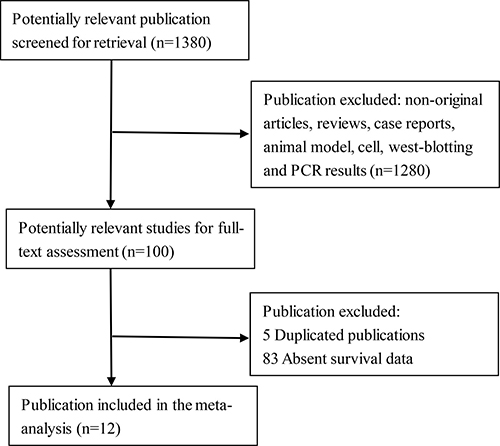 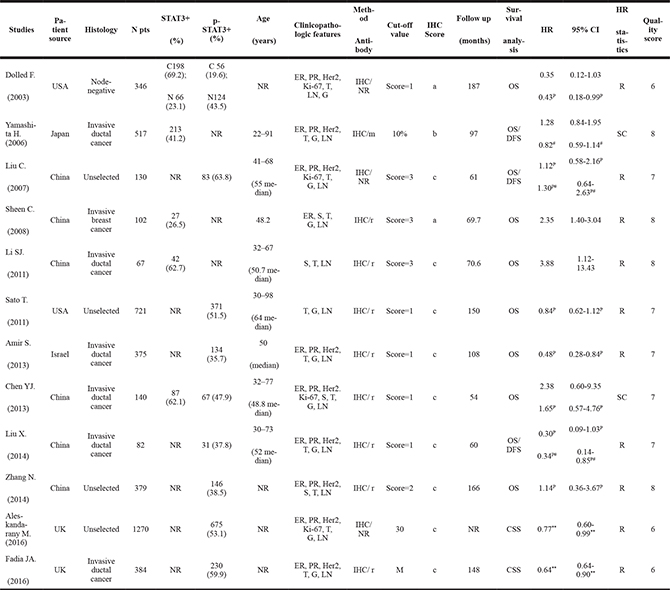 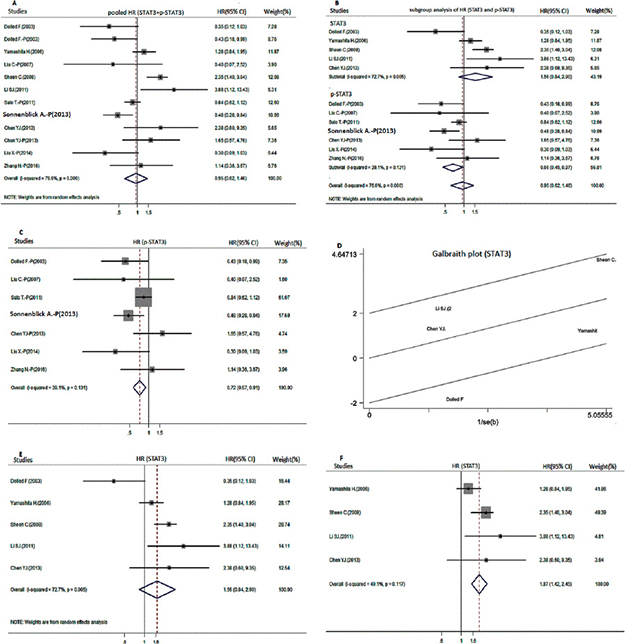 Subgroup analyses of HR for the OS of STAT3 and p-STAT3 expression were performed. First, subgroup analysis was performed to estimate whether biomarkers (STAT3 and p-STAT3) of breast cancer are different from the analysis above (Figure 2B). Results showed that p-STAT3-positive patients have significantly higher OS than their counterparts (combined HR = 0.66, 95% CI: 0.45–0.97) in the random-effects model. Considering that I2 = 39.1% and p value of Q test for heterogeneity test = 0.131, we tested p-STAT3 again in the fixed-effects model (HR = 0.72, 95% CI: 0.57–0.91) (Figure 2C). However, another outcome displayed a significant degree of heterogeneity in the STAT3 subgroup (I2 = 72.7%, p value of Q test for heterogeneity test < 0.1). Accordingly, we performed heterogeneity test and sensitivity analysis. Dolled F. (2003) performed a heterogeneity test by applying the Galbraith plot (Figure 2D). Subsequently, we calculated pooled HRs again for the OS of STAT3 before and after excluding the heterogeneity test. Results showed that STAT3 overexpression reduces OS (HR = 1.87, 95% CI: 1.42–2.45, p < 0.001) when the result of the heterogeneity test is excluded (HR = 1.56, 95% CI: 0.84–2.90, p = 0.163) (Table 2, Figure 2E and 2F). In all outcomes mentioned above, a difference between STAT3 and p-STAT3 expression for OS in breast cancer was observed. We also performed subgroup analysis according to race (Asian and non-Asian), year (published before and after 2010), patient number (over and under 100 patients), and IHC scoring method (multiplied score and staining intensity or percent of positive cells) (Table 3). Overall, no significant association was observed. However, the subgroup analysis of non-Asian participants (0.57, 95% CI: 0.37–0.88, I2 = 50.7%, p = 0.012) predicted good OS.

Table 2: Test of heterogeneity and sensitivity analysis in the STAT3 subgroup

STAT3 is a vital cytoplasmic transcription factor, and activated STAT3 (p-STAT3) is upregulated by aberrant upstream tyrosine kinases; p-STAT3 transports information to the nucleus and controls gene expression, which is essential for cancer cell growth and survival [1]. Xu YH et al. (2014) performed a meta-analysis of 17 retrospective trials, including 1793 patients with non-small-cell lung cancer. They found that positive STAT3 expression in patients is associated with poorly differentiated, advanced stage, lymph node metastasis. They also revealed that the estimated pooled HR (0.67, 95% CI: 0.57–0.77) is statistically significant for the OS of patients with non-small-cell lung cancer (p < 0.0001) [22]. Li MX et al. (2015) performed a meta-analysis of the digestive system by enrolling 22 studies with 3585 patients. Similarly, they found that p-STAT3 overexpression is related to tumor differentiation and lymph node metastases. On the relationship between breast tumor and STAT3/p-STAT3 expression, the overexpression of STAT3 and p-STAT3 also exerts a similar effect on non-small-cell lung cancer and digestive system cancer in poorly differentiated, advanced stage, lymph node metastasis [23]. Considering that the estimated pooled HR (0.90, 95% CI: 0.63–1.28, p = 0.557) is unrelated to OS, Li CY et al. (2016) conducted a subgroup analysis and found that the pooled HRs of OS differ with the origin change of population [2]. Consequently, we performed the present meta-analysis to determine whether the combined effect of HR between positive STAT3/pSTAT3 expression and OS is similar.

This meta-analysis involves 12 studies and 4513 female patients with breast cancer. This study found no clear relationship between OS and high STAT3 and p-STAT3 expression (HR = 0.95, 95% CI: 0.62–1.46, p > 0.05). Thus, we reviewed the enrolled literature searches again and found that both Sheen C. (2008) and Li SJ. (2011) reported that STAT3 is related to poor clinicopathological parameters and poor OS [15, 16]. However, both Sonnenblick A. (2013) and Liu X. (2014) testified that p-STAT3 is a marker of good prognosis in breast cancer [4, 18]. Therefore, we analyzed whether the pooled insignificant HR is interconnected with different biomarkers (STAT3 and p-STAT3) of breast cancer. We performed subgroup analysis and found that STAT3 overexpression reduces OS (HR = 1.87, 95% CI: 1.42–2.45, I2 = 49.10%, p < 0.001) in the fixed-effects model when the results of the heterogeneity test involving patients with node-negative breast cancer are excluded. Chen YJ. et al. (2013) reported that positive p-STAT3 expression possibly indicates poor OS in breast cancer because it is significantly associated with tumor formation, migration, and invasion. By contrast, our meta-analysis found that pooled positive p-STAT3 expression indicates significantly better OS (HR = 0.72, 95% CI = 0.57–0.91, I2 = 39.1%, p = 0.006) in the fixed-effects model. Prior studies on other types of cancer have reported a similar observation. Monnien F et al. (2010) detected the nuclear expression of p-STAT3 in 104 cases of advanced rectal cancer (T3–T4) by IHC [24]. They argued that the OS of p-STAT3-positive patients is significantly higher than that of their counterparts. However, the underlying mechanisms remain unclear. A possible explanation is that p-STAT3-positive patients may be associated with better response to neoadjuvant and adjuvant chemotherapy because activated p-STAT3 could contribute to microtubule formation and promote tumor cell dissemination. Meanwhile, neoadjuvant or adjuvant chemotherapy, such as Paclitaxel, possibly inhibits microtubule formation and transactivation activity. By contrast, neoadjuvant therapy may inhibit STAT3 phosphorylation and may negatively impact dimerization. Yuan B et al. (2008) detected the nuclear expression of p-STAT3 before and after neoadjuvant therapy in 50 cases of cervical cancer [25]. They found that the proportion of genes in high expression level of p-STAT3 decreased from 92% to 76% (p = 0.001). Similarly, Sonnenblick A. et al. (2013) claims that high p-STAT3 expression is connected with improved OS only among breast cancer patients who received adjuvant chemotherapy [18]. These results indicate that p-STAT3 is a potential molecular biomarker for predicting chemotherapeutic effect, and patients with positive p-STAT3 could easily benefit from chemotherapy. Furthermore, both targeting STAT3 for blocking either dimerization or STAT3 phosphorylation and targeting p-STAT3 can directly improve prognosis. This condition may also be the reason why the pooled effect predicts better breast CSS with p-STAT3 overexpression (p < 0.001). Nevertheless, trials associated with breast cancer CSS and DFS were relatively rare. We expect an updated pooled effect about both CSS and DFS through further validation using a large cohort of patients and prospective randomized data in breast cancer.

Although the present meta-analysis suggests the absence of publication bias (p > 0.1), we could not prevent potential bias among these studies. Despite our significant efforts to gather additional relevant information, publication bias was still inevitable. Small-sample or negative studies are unlikely to be accepted and published. Furthermore, some reports did not offer sufficient data for HRs and 95% CIs. We obtained data by reading the survival rates presented on the graphical survival plot. Nevertheless, this method cannot completely eliminate inaccuracy. Authentic conclusions cannot be drawn in the absence of all relevant information. Thus, large-scale RCT studies with long-term follow up and a full description of survival events are indispensable.

In conclusion, positive STAT3 expression may indicate poor OS. However, p-STAT3, as a potential molecular biomarker for predicting chemotherapeutic effect, appears to have better prognostic value than STAT3.

Positive STAT3 expression may indicate poor OS. However, p-STAT3, as a potential molecular biomarker for predicting chemotherapeutic effect, appears to have better prognostic value than STAT3.

We would like to thank the authors of all selected studies that provided sufficient data in the present study. This study was supported by the Development of Sichuan Science and Technology Agency Fund Project (0040205301C24). The funders had no role in the development of the study design, data collection and analysis, decision to publish, or preparation of the manuscript.

6. Stang A. Critical evaluation of the Newcastle-Ottawa scale for the assessment of the quality of nonrandomized studies in meta-analyses. Eur J Epidemiol. 2010; 25:603–5.