Osteosarcoma(OS) is the most common primary malignant, aggressive neoplasm of the bone and has a predilection for occurring in children and adolescents [1]. The metaphyses of long bones are one of the most common sites for osteosarcoma; approximately 50% of cases are localized in the distal femoral and proximal tibial knee region, and approximately 20% occur in the spine and pelvis [2]. In 80%–90% of cases, the patients already have systemic spreading at the time of diagnosis, and pulmonary metastases are the predominant site of osteosarcoma spread and the major cause of fatal outcomes [3]; these factors have all been linked to poor prognosis in osteosarcoma patients. Unfortunately, the rate of survival has not improved in 20 years. Therefore, new therapeutic targets and strategies must be sought to inhibit the progression of osteosarcoma.

Quaking(QKI) is an RNA binding protein and has been shown to serve as a tumor suppressor gene that inhibits the development of several types of tumors, including glioblastoma, astrocytic glioma, oral squamous cell carcinoma, gastric cancer and colon cancer [4–11]. Up to now, studies of QKI in tumor metastasis have been rare. Some studies have shown that QKI might inhibit the metastasis of colorectal cancer by inhibiting β-catenin post-transcriptionally [11–14]. However, the expression changes of QKI in osteosarcoma and the roles of QKI in osteosarcoma progression are unknown.

Expression of the miR-17-92 cluster in osteosarcoma

Effects of the miR-17-92 cluster on osteosarcoma cell proliferation, invasion and migration in vitro 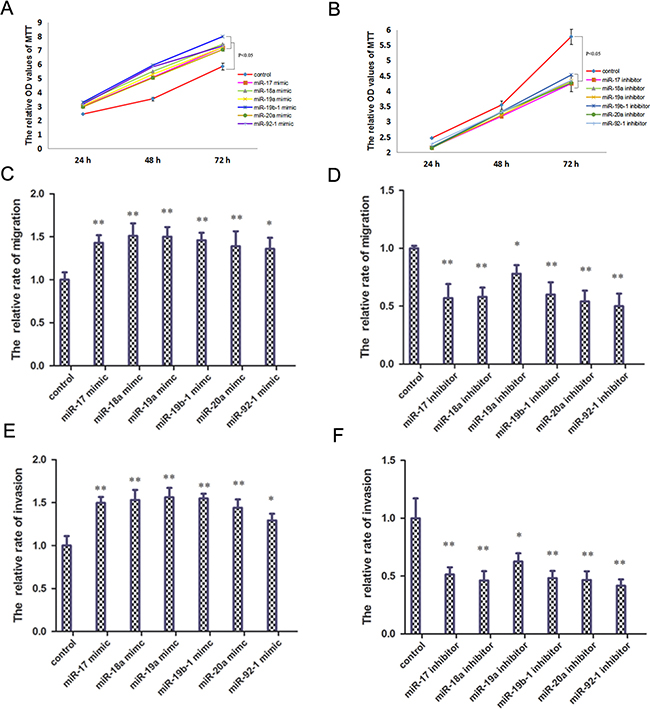 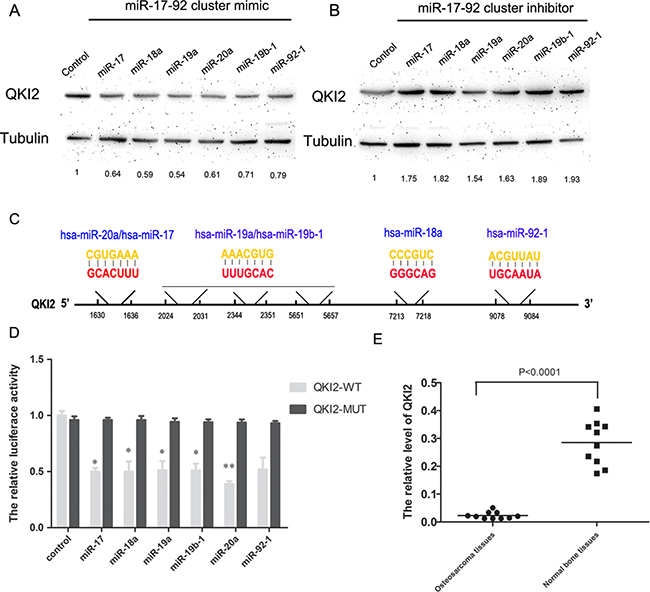 Effects of QKI2 on osteosarcoma cell proliferation, invasion and migration in vitro 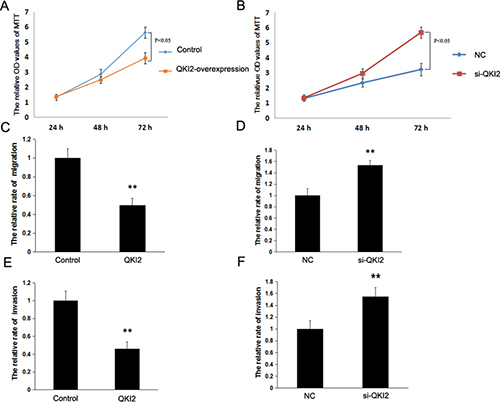 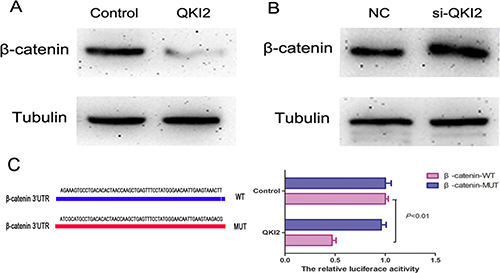 It has been shown that miRNAs can post-transcriptionally regulate the expression of protein-encoding genes through either binding to the 3’-UTR of target mRNA to partly suppress protein translation or binding to target mRNA with perfect complementarity to directly cleave target mRNA [20–22]. Consistently, miRNAs have been proven to be involved in the regulation of various cellular processes, including cell differentiation, proliferation, and apoptosis [23]. Increasing evidence suggests that miRNAs are seriously deregulated in various neoplasms and act as oncogenes(oncomirs) or tumor suppressor genes [24]. Subtle changes in individual miRNA expression levels can be sufficient to influence protein-encoding gene expression; therefore, optimal miRNA quality in each sample is a crucial prerequisite for miRNA expression analysis. However, osteosarcomas are generally treated with neoadjuvant chemotherapy before radical surgery, which potentially influences the miRNA quality. In our study, we thus chose FFPE biopsy samples of pretherapeutic primary osteosarcoma.

QKI is an RNA binding protein and functions as a major post-transcriptional regulator of RNA metabolism [36–38]. Recent studies have revealed that QKI acts as a tumor suppressor gene, which is crucial for the tumorigenesis and progression of various malignant tumors, including glioblastoma, astrocytic glioma, oral squamous cell carcinoma, gastric cancer and colon cancer [4–11]. However, the function of QKI2 in osteosarcoma is unknown. In this work, to the best of our knowledge, we first discovered that QKI2 inhibited osteosarcoma cell proliferation, invasion and migration by directly targeting β-catenin. β-catenin is a well-known multifunctional protein that is involved in cellular proliferation, differentiation and apoptosis. β-catenin has been reported to be overexpressed in osteosarcoma and associated with osteosarcoma metastasis [39–41].

The human fetal osteoblast cell line (hFOB 1.19 cells), human osteosarcoma cell line (HOS and 143B) and HEK-293TN cell line were purchased from the Cell Bank of the Chinese Academy of Sciences (Shanghai, China). The cells were cultured in DMEM (Gibco, USA) supplemented with 10% FBS (Gibco, USA) and 2% penicillin-streptomycin (10 U/ml) at 37°C in a 5% CO2 atmosphere.

pWPXL lentiviral vectors were employed to overexpress QKI2 in osteosarcoma cells. The full-length sequence of QKI2 was amplified using reverse-transcription PCR, and it was digested and inserted into the pWPXL vector. To package QKI2-overexpressing lentiviral particles, the pWPXL plasmid carrying QKI2 was transfected into HEK-293TN cells together with the packaging plasmids (pSPAX2 and pMD.2G) for 48 h. Then, the supernatant was harvested and condensed using PEG. The miR-17-92 cluster mimic and the miR-17-92 cluster inhibitor were purchased from Invitrogen (Invitrogen, USA). These miRNAs were transfected into the cells using Lipofectamine 2000 (Invitrogen, USA).

The migration and invasion assays were performed using a Transwell chamber (Coster, USA). First, 2 × 104 cells in 200 μL of serum-free DMEM medium were seeded into the upper chamber. The lower chambers were filled with 800 μL of complete DMEM medium with 10% FBS. After incubation for 24 h at 37°C, the cells on the upper side of the chamber were softly scraped off with a cotton swab. The cells that invaded the lower side of the chamber were fixed with 1% crystal violet for 30 min before being counted. Pictures were taken using an Olympus inverted microscope (100×). The number of invaded cells was counted using ImageJ software.

For the luciferase assay, HEK 293 TN cells were seeded in 96-well plates. The wild-type (WT) and mutant (MUT) QKI2 3′-UTRs were inserted into a pmirGlo Dual-Luciferase miRNA Target Expression Vector (Promega, USA). The QKI2 3′-UTR reporter plasmid and miR-17-92 cluster were co-transfected into HEK-293TN cells. The luciferase activity of firefly and Renilla were measured via Dual-Luciferase Reporter Assay Kit (Promega, USA). All experiments were performed in triplicate and repeated three times.

All statistical analyses were performed using SPSS 16 software (SPSS, USA). Significant differences between groups were determined by one-way ANOVA analysis. All results are reported as the mean ± SD. P < 0.05 or P < 0.01 was considered statistically significant.

All the authors declare that there are no conflicts of interest regarding the publication of this paper.