Mixed phenotype acute leukemia (MPAL) is an uncommon manifestation of acute leukemia. The aim of this study is to further characterize the genetic landscape of de novo cases of MPAL that fulfill the 2016 World Health Organization (WHO) classification criteria for this entity. We identified 14 cases examined by next generation sequencing (NGS) using 28 (n = 10), 53 (n = 3) or 81 (n = 1) gene panels: 7 cases with a B-cell/myeloid (B/My) immunophenotype, 6 T-cell/myeloid (T/My) immunophenotype, and 1 B-cell/T-cell (B/T) immunophenotype. A total of 25 distinct mutations were identified in 15 different genes in 9/14 (64%) patients. FLT3-ITD was the only recurrent mutation in 2 patients. B/My MPAL cases less commonly harbored mutations compared with T/My MPAL cases (43% vs. 100%, p = 0.07). In contrast, B/My MPALs more commonly showed a complex karyotype compared to T/My MPALs (71% vs. 17%, p = 0.1). With NGS and karyotype combined, most (93%) MPAL cases had mutations or cytogenetic abnormalities. With a median follow-up of 12.5 months, there were no significant differences in median overall survival (OS) between patients with B/My or T/My MPAL (17.8 and 6.5 months, respectively, p = 0.81) or between patients with MPAL with versus without gene mutations (6.5 and 13.3 months, respectively, p = 0.86). Our data suggest that the distinguishing cases of MPAL according to immunophenotype has value because the underlying mechanisms of leukemogenesis might differ between B/My and T/My MPAL.

Our capacity to characterize and classify acute leukemia has evolved greatly over recent decades, in part due to advances in technology applied to the study of these neoplasms. Since the advent of immunohistochemistry and flow cytometry, most patients with acute leukemia can be readily assigned to either myeloid, B- or T-lymphoid lineage [1, 2]. However, unusual cases also have been described with confounding immunophenotypes, expressing markers of more than one lineage. In 1981, McGraw et al. reported the first case of mixed phenotype acute leukemia (MPAL), followed by a number of other reports, although designated inconsistently using a number of terms in the literature. Reports of MPAL cases prompted the first classification proposal by Catovsky and colleagues in 1991, and followed by subsequent revisions linked to the advent of newer, more specific markers [3–7]. The description of the clinical characteristics, outcomes and various clinicopathologic correlations of MPAL have increased over the last three decades [8–15]. The latest version by the World Health Organization (WHO) included more stringent diagnostic criteria and further delineation of the heterogeneity of cases of MPAL [16, 17].

Mixed phenotype acute leukemia (MPAL) is currently defined as a leukemia in which the blasts express antigens of more than one lineage to such a degree that it is not possible to assign the leukemia to any single lineage with certainty. These cases can be further subdivided into bilineal and biphenotypic. In bilineal MPAL, two distinct blast populations with different immunophenotypes are present. In contrast, biphenotypic MPAL is characterized by one blast cell population expressing markers of more than one lineage [16, 17]. MPAL cases can express either B or T cell antigens together with myeloid markers (B/My or T/My, respectively). Less frequently, rare neoplasms express B and T cell antigens (B/T) or B, T and myeloid antigens (B/T/My) [18, 19].

Despite the progress described above, relatively little is known about the frequencies and types of genetic mutations in MPAL. Of the studies that have assessed MPAL cases for genetic mutations, few have used NGS methods that can assess a large number genes designed to detect common mutations in acute leukemia, including AML and B and T-ALL. 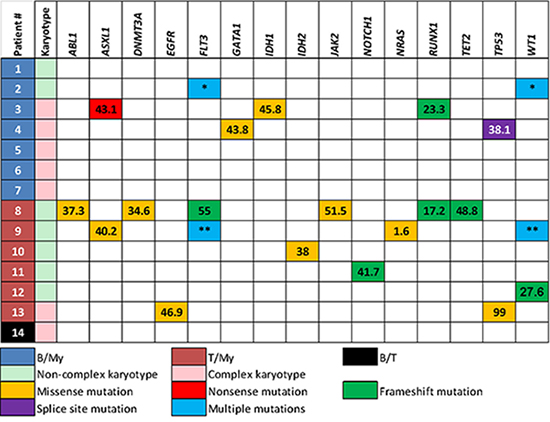 Table 2: Conventional karyotype and treatment in each patient with mixed phenotype acute leukemia

The study of ambiguous lineage in cases of acute leukemia continues to be a challenge. The precise cytogenetic and molecular events leading to co-expression of antigens of more than one cell lineage in MPAL are unknown. Cytogenetically, using the 2008 WHO criteria, no single cytogenetic abnormality was overrepresented in a cohort of 100 patients indicating that MPAL is not the result of unique recurrent genetic abnormalities [10]. The outcome of patients with MPAL is inferior to the outcomes of patients with AML or either B or T ALL. Clearly, improved or novel therapies are needed for patients with MPAL. Toward this end, limited preliminary exploration of genetic mutations has been published in patients with MPALs [11, 20–23].

In this study, we found that almost two thirds of cases of MPAL harbor mutations. While our NGS panels cover most genes frequently mutated in AML or ALL (see supplementary information), the true mutation frequency is likely higher because the NGS panels used in this study do not cover genes in cohesion-complex or spliceosome-complex. Accordingly, it is not surprising that a whole exome sequencing study detected mutations in 91% of MPAL cases assessed [23]. Similar to earlier literature, the mutation pattern in patients with MPAL is heterogeneous [11, 23]. Mutated genes involve a variety of cellular functions including chromatin modification (ASXL1), DNA methylation (DNMT3A, IDH and TET2), tumor suppressors (TP53 and WT1), transcription factors (NOTCH1, RUNX1, and GATA1) and activated signaling (FLT3, EGFR, NRAS and JAK2).

When a gene mutation is present in MPAL, co-mutations of other genes are common (71%). Mutant allelic frequencies in co-mutated genes demonstrate variance, consistent with the heterogeneous nature (i.e. immunophenotype) of MPAL (Figure 1). However, we cannot conclude that MPAL shows a hybrid mutational profile between AML and ALL because many mutations, even those regarded as myeloid-associated gene mutations, are present in both AML and ALL. Particularly, early precursor T-ALL is known to have mutations in FLT3, RAS, DNMT3A and IDH1/2 [24, 25]. Similarly, RUNX1 mutations are seen in B-ALL [26]. Interestingly, mutations in NPM1 and CEBPA, which define unique genetic subtypes of AML, were not in the MPAL cases in this study. Absence of mutations in NPM1 and CEBPA also has been observed in other studies [11, 23].

About 70% of MPAL patients have chromosomal aberrations and often have a complex karyotype. Thirteen of 14 (93%) patients had cytogenetic aberrations and/or gene mutations, demonstrating genetic instability in MPAL. There appear to be some differences between B/My and T/My MPAL. B/My MPAL is less commonly associated with gene mutations than T/My MPAL (43% vs. 100%, p = 0.07). In contrast, B/My MPAL cases more commonly had a complex karyotype (although not statistically significant). Although the statistical power of this study is insufficient, the data suggest that B/My and T/My cases have disparate pathogenetic mechanisms.

The results in this study and those in the literature show that genomic aberrations in MPAL are complex. Indeed, the few studies reported thus far contain differing results when it comes to genetic mutations seen in MPAL. It is not surprising that there exists such heterogeneity in MPAL considering that the definition of the entity is that of ambiguous lineage. In addition, the pathogenesis of MPAL is not well understood. It is possible that competing transcription factors antagonize the functions of each other to promote expression of one lineage over the other. Alternatively, dysregulation and aberrant expression of transcription factors that govern cell differentiation occur on the basis of the genomic and epigenetic alterations. The timing and level of expression of specific transcription factors may therefore affect lineage determination [27, 28]. For example, reduced expression of human PAX5 during the development of early lymphoid progenitors committed to B lineage has been associated with biphenotypic cells and acute leukemia [29, 30]. It seems that a high level of PAX5 expression is critical for the development of common lymphoid progenitors along the B-cell pathway, whereas low levels may result in a mixed phenotype. Along similar lines, it seems that the fate of early T-cell lineage progenitors is dependent on the Notch receptor signaling pathway, without which myeloid differentiation may occur [31]. This suggestion is consistent with the study by Eckstein et al. as well as this study which identified NOTCH mutations to only be present in T/My MPAL [23].

The prognosis of patients with MPAL is poor. Although patients were not uniformly treated in this study, we evaluated if mutational status could help to identify patients with a worse outcome. Although not significant, patients with B/My MPAL had a longer median overall survival than patients with T/My MPAL (17.8 and 6.5 months, respectively, p = 0.81) (Figure 2A). MPAL patients with mutations also appeared to have a worse OS compared to MPAL patients without mutations (6.5 vs. 13.3 months, p = 0.86) (Figure 2B). A larger-scale cohort study is needed to better assess these possible associations.

We searched for all MPAL cases tested using an NGS panel over 4 years (2012–2016). Acute undifferentiated or unclassifiable leukemia and early thymocyte precursor T-ALL were not included. Molecular data were collected. Clinical, laboratory, cytogenetic and bone marrow findings were also reviewed.

All diagnoses of MPAL were based on the 2008 and 2017 WHO classification criteria. In brief, lineage was designated as follows: 1) myeloid lineage: positive myeloperoxidase (flow cytometry, immunohistochemistry or cytochemistry) or monocytic differentiation (at least 2 of the following: NSE, CD11c, CD14, CD64, lysozyme); 2) T-lineage: positive cytoplasmic CD3 (flow cytometry with antibodies to CD3 epsilon chain) or surface CD3; 3) B-lineage: strong positive CD19 with strong expression of either CD79a, cytoplasmic CD22 or, CD10. Alternatively, a weak CD19 with strong expression of at least 2 of the following: CD79a, cytoplasmic CD22, or CD10.

Clinically validated 28-gene, 53-gene or 81-gene panels were used to assess mutational status in all patients as described previously (see supplementary Table 1, 2 and 3 for assessed genes/codons in each panel) [32]. Adequate coverage was defined as ≥ 250 reads for each exon. The analytical sensitivity of the platforms is variable for different genes but is generally 1–3%. Only mutations identified in both forward and reverse reads were considered positive.

PCR-based DNA analysis was performed to detect internal tandem duplications (ITD) and codon 835/836 point mutations in FLT3. A multiplex PCR using fluorescently-labeled primers was performed, followed by detection and sizing of PCR products using capillary electrophoresis. For detecting point mutations in codons 835/836, restriction enzyme digestion of the PCR products was performed prior to capillary electrophoresis. The lower limit of detection (analytical sensitivity) of this assay is approximately 1% of mutant DNA in a background of wild type DNA.

PCR-based DNA sequencing analysis was performed to assess CEBPA (CCAAT/enhancer binding protein-alpha). Mutations in this gene have been implicated as a favorable prognostic factor in AML. The lower limit of detection (analytical sensitivity) of the assay is 10–20% mutation bearing cells in the sample tested.

Fluorescence in situ hybridization for detection of BCR-ABL1 was performed using a LSI fusion probe from Abbott Molecular, Inc (Abbott Park, IL). A total of 200 interphases are analyzed.

Fluorescence in situ hybridization for detection of KMT2A rearrangement was performed using a LSI dual color, break-apart probe from Abbott Molecular, Inc (Abbott Park, IL) which hybridizes to band 11q23 (spectrum green on the centromeric side and spectrum orange on the telomeric side of the gene breakpoint).

Comparison among categorical variables and numerical variables was carried out by using the Fisher exact test and Mann-Whitney test, respectively. Overall survival was calculated from the date of diagnosis to the date of death or the last date of follow-up, whichever occurs earlier. Patients who underwent allogeneic stem cell transplant were censored. Survival probability was determined using the Kaplan–Meier method, with differences compared by the log-rank test. Statistical analysis was performed using GraphPad Prism (GraphPad software, San Diego, CA) with significance set at a p-value < 0.05 (two-sided).