Diagnostic value of WIF1 methylation for colorectal cancer: a meta-analysis

*These authors are co-first authors of this work

Colorectal cancer (CRC) is a complex multifactorial disease with an annual incidence of 1.2 million new cases and 600,000 deaths, ranking the third most frequent malignancy worldwide [1]. Although early screening and treatment reduces the morbidity and mortality [2-4], CRC remains the major cause of cancer death [5]. CRC often occurs in people older than 50 years, and its incidence is higher in men than women [6]. More than one-third of the deaths occur in patients aged greater than or equal to 80 years, and the rates of incidence and death are highest in blacks and lowest in Asians/Pacific Islanders [7].

The Wnt signaling pathway is a highly conserved pathway that includes canonical Wnt pathway (Wnt/β-catenin pathway), planar cell polarity pathway and Wnt/Ca2+ pathway, [17, 18]. Aberrant Wnt pathway signaling is an early progression event of tumor and it occurs in 90% of CRC [19]. As a common antagonist of Wnt/β-catenin signaling, the main function of Wnt inhibitory factor 1 (WIF1) is to bind the extracellular Wnt ligands, disturbing β-catenin degradation, therefore inhibiting the Wnt/β-catenin pathway [20].

WIF1 methylation has been widely studied in CRC, colorectal adenoma and normal adjacent tissue samples [21, 22]. However, the characterization of WIF1 methylation in the diagnosis of CRC was still debatable. Studies with a small number of samples and different assay methylation methods might produce spurious results. In the present study, we performed a meta-analysis to evaluate WIF1 methylation as a diagnostic biomarker for CRC.

As shown in Figure 1, a total of 103 articles were obtained for initial evaluation from PubMed, Embase, CNKI and Wanfang databases, and 93 articles remained after removing the duplicate literatures. A further check excluded 58 irrelevant articles and 25 articles without sufficient data. Ultimately, 10 eligible articles were enrolled in the current meta-analyses, which were involved with 12 case-control studies. All the eligible articles were published in English or Chinese. The information for WIF1 methylation was collected from eligible studies and was shown in Table 1. 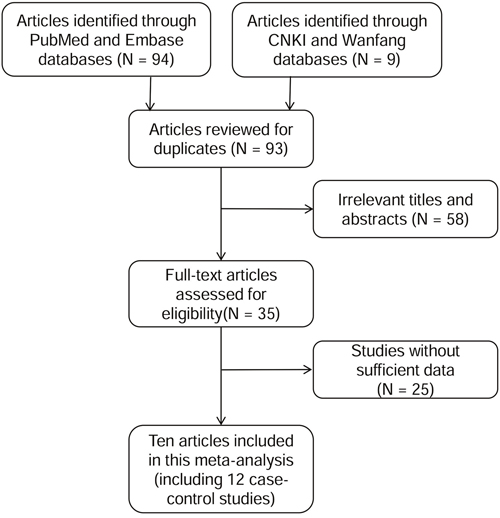 Figure 1: Flow diagram of the stepwise selection from relevant studies.

Table 1: The main characteristics of all available studies

The Quality Assessment of Diagnostic Accuracy Studies (QUADAS) assessment tool was used to assess the quality of the 10 studies. As shown in Supplementary Table 1, 8 out of the 10 studies did not mention the criteria that the index test results should be interpreted without knowledge of the results of the reference standard (item 10). And 3 out of 10 studies did not give the information to ensure if the time period between reference standard and index test was short enough to be reasonably sure that the target condition did not change between the two tests (item 4).

WIF1 methylation was assessed among a total of 1420 CRC and 946 control samples from 12 case-control studies. Further analysis indicated a moderate heterogeneity in the current meta-analysis (I2 = 42%). Therefore, a fixed-effect model was applied for the current meta-analysis. And our results showed a significant association of WIF1 hypermethylation with CRC (OR = 30.10, 95% CI = 19.48-46.50, P < 0.001, Figure 2). Deeks’ funnel plot showed no publication bias in our meta-analysis (P = 0.68, Figure 2). 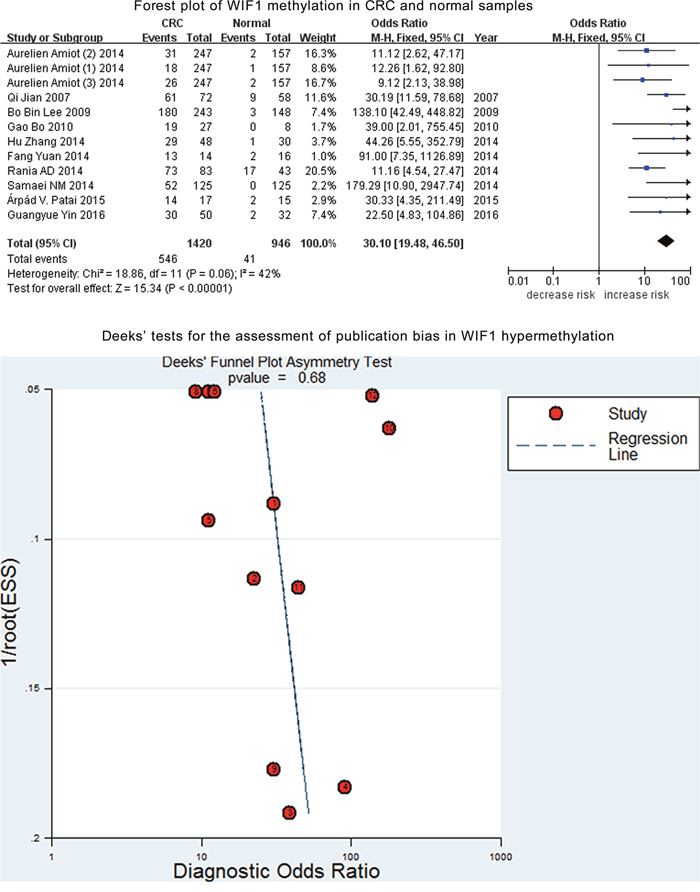 Figure 2: Forest plot of WIF1 methylation in CRC and normal samples. Deeks’ tests for the assessment of publication bias in WIF1 hypermethylation.

WIF1 methylation as a diagnostic biomarker for CRC

Figure 3: Forest plots of sensitivities and specificities for WIF1 hypermethylation in the diagnosis of CRC.

Dysregulation of Wnt signaling pathway genes (including WIF1) often results in uncontrolled β-catenin signaling and excessive proliferation that predisposes cells to tumorigenesis [24]. WIF1 is a common target of epigenetic silencing in various human cancers [25]. Since numerous studies had found WIF1 hypermethylation in CRC, we performed a meta-analysis to evaluate WIF1 methylation as a diagnostic biomarker for CRC.

In the present meta-analysis, the DOR value was 26.86, suggesting that CRC patients were more likely to be diagnosed as positive by WIF1 methylation test. To note, DOR as an overall measure of diagnostic accuracy was often computed as the odds of positivity among patients [26]. Compared to guaiac fecal occult blood tests, the detection of WIF1 methylation in either serum or urine has a higher accuracy for advanced colorectal neoplasia [27]. As one of the most widely used tumor biomarkers worldwide, serum carcino-embryonic antigen (CEA) was used to screen for CRC [28]. However, the sensitivity and the specificity of CEA were not high in screening for CRC (sensitivity = 0.36; specificity = 0.87) [29]. Moreover, the sensitivities of CEA for detecting CRC up to 1 and 4 years before clinical presentation were only 0.25 and 0.13, respectively [30]. Our study showed that WIF1 hypermethylation yielded a high AUC of 0.9115 (sensitivity: 0.40; specificity: 0.95) in CRC. Similarly, TCGA data also showed a high diagnostic performance of WIF1 hypermethylation for CRC (AUC = 0.89, sensitivity = 0.82; specificity = 0.97). Future study is needed to check the joint diagnostic value of WIF1 hypermethylation and conventional plasma proteins for CRC.

Cancer incidence and mortality vary a lot between and within racial and ethnic groups. The incidence and mortality from CRC was higher among blacks when compared with other race-ethnicities [35]. Racial disparities may cause the mixed results of DNA methylation in CRC. Our subgroup meta-analysis by ethnicity suggested the significant association of WIF1 methylation with CRC existed in Asians, Europeans and Africans. However, due to the small amount of studies, more studies should be performed in Europeans and Africans to confirm this observation.

Gender differences in the incidence of CRC have been observed in Asia and North America [36-38]. In addition, the incidence of CRC is low at ages younger than 50 years, but increases with age [6]. Our meta-analysis and analysis of TCGA data showed no significant difference of WIF1 methylation between males and females. Analysis of TCGA data showed that WIF1 were more frequently hypermethylated in CRC patients aged greater than or equal to 60 years. However, there was no significant difference in WIF1 methylation between age subgroups in our meta-analysis. This discrepancy might be due to a paucity of age information in the meta-analysis. Future studies are needed to explore the potential relationship of WIF1 methylation with the incidence age and the gender status of CRC.

There are the following aspects of main limitations in our meta-analysis to be noted. Firstly, selection bias is inevitable due to the strategy restricted to articles published in English and Chinese. Secondly, we did not study the methylation status in histological subtypes or different clinical stages due to the insufficient information. Thirdly, the regions for methylation detection were not taken into consideration in our meta-analysis. Therefore, a further study is needed to distinguish the different regions to confirm which specific region could represent WIF1 methylation.

In conclusion, our meta-analysis established WIF1 hypermethylation had a potential in the clinical diagnosis for CRC.

We performed a systemic search using two relevant literature databases (PubMed and Embase) and two Chinese databases (CNKI and Wanfang). Eligible literatures updated until August of 2017 were identified using “(Wnt inhibitory factor 1 or WIF1) and (colorectal cancer or colorectal tumor or colorectal carcinoma or colorectal neoplasm) and (methylation or epigene*)” as the keywords. Studies included in the meta-analysis were required to meet all the following criteria: [1] the study should have full text to be confirmed as an original study on the association between CRC and WIF1 methylation; [2] the study should contain case-control cohorts or have subgroups according to ethnicity, gender or age; [3] control samples must be non-cancerous ones from healthy persons or the adjacent non-cancerous tissues of CRC patients; [4] the study had sufficient data to calculate true positive, false positive, true negative and false negative; [5] when the same set of patients reported more than once, only the most complete one was included to avoid data overlapping.

For all eligible literatures, the following data was extracted respectively by three authors (HH, BL and CZ) with a standardized data extraction form which contained gene name, the first author’s name, year of publication, patient ethnicity, size and type of sample, methylation status, and specific information about subgroups. Two authors (HH and BL) estimated the quality of 10 studies independently according to the QUADAS [39].

We extracted the 450K array data of 288 colon adenocarcinoma samples and 38 non-tumor samples from TCGA website (https://tcga-data.nci.nih.gov/docs/publications/tcga/). And we calculated the average methylation level of four CpG sites (cg03509412, cg19427610, cg24166864, cg21383810) to validate the performance of WIF1 methylation in CRC. WIF1 mRNA expression was retrieved from GEO database (www.ncbi.nlm.nih.gov/geo, accession no. GSE32323). We focused on the expression changes of WIF1 in two CRC cell lines (HCT116, PKO) with and without 5’-AZA-deoxycytidine treatment.

Meta-analysis was performed using Review Manager 5, Meta-Disc 1.4 and Stata SE12.0 software. The ORs and 95% CIs were extracted or calculated to evaluate the strength of the association between WIF1 methylation and CRC risk. Overall ORs and 95% CIs were calculated with the data in the selected studies. I2 statistic was used to estimate the heterogeneity of the studies in the meta-analysis [40]. The random-effect model was applied for the meta-analysis when I2 > 50%, otherwise, the fixed-effect model was used [41]. Subgroup analyses were also performed to explore the source of heterogeneity. For the diagnostic meta-analysis, we extracted true positive, false positive, true negative and false negative from each eligible study. To estimate the diagnostic performance of WIF1 methylation, we calculated forest plots of sensitivity, specificity, the PLR, NLR, and DOR, and we also drew the summary receiver operator characteristic (SROC) curve [23]. Deeks’ funnel plot asymmetry test was performed to assess the potential publication bias [42]. A nonparametric Mann-Whitney U test was used to assess the methylation differences between tumor tissues and normal tissues from TCGA database. Receiver operating characteristic (ROC) analysis showed the diagnostic value of WIF1 methylation in TCGA database. Differences were considered statistically significant if P < 0.05.

SD and HH contribute to the conception, design and final approval of the submitted version. HH, BL, XY, CZ, YY, RP, TW and DJ contribute to interpretation of data and completion of figures and tables. BL, CZ, MC, YC, TH, HJ, and YC contribute to performing the data analyses. HH and SD contribute to writing the paper. All the authors have read and approved the final manuscript.