Background: To systematically review perioperative outcomes and postoperative complications between splenectomy plus s-EGDV and n-sEGDV for portal hypertension complicated with thoracic esophageal varices and bleeding by a meta-analysis.

Method: We searched the databases of PubMed, the Cochrane Library, Web of Science, EMBASE, TCGA, Chinese Biomedicine Database from January 2000 to June 2017, and included studies that compared perioperative outcomes and postoperative complications between s-EGDV and n-sEGDV. These included studies were assessed by two independent investigators.

Conclusion: sEGDV offers a more effective surgical approach with fewer complications to treat portal hypertension than n-sEGDV. Upon further detailed analysis of the surgical indications and hemodynamic and postoperative major complications of selective devascularization, sEGDV likely will provide us with a new direction in the choice of surgical approach for portal hypertension.

In China, cases of hepatitis leading to liver cirrhosis and portal hypertension are on the rise. The typical clinical manifestations of portal hypertension are splenomegaly and hypersplenism, portacaval collateral, and ascites; in some patients, this is further complicated by esophageal varices and bleeding, ultimately resulting in mortality [1]. Portosystemic shunt (PSS) and gastroesophageal devascularization (GD) are the main surgical treatment methods [2]. PSS operation can significantly reduce portal venous pressure, and the rate of bleeding can be controlled by 85%–100%. Further, PSS can not only eliminate ascites in a rapid and efficient manner but also improve blood circulation of the gastric mucosa [3–4]. However, PSS does not conform to normal physiology. It reduces the blood flow from the portal vein to the liver and even causes blood outflow from the liver, resulting in further liver dysfunction after operation [5]. The incidence of hepatic encephalopathy is high, and the operation is very traumatic. Devascularization is a surgical procedure to reduce or block the portal blood flow and the communicating veins of the portal vein and the azygos vein system. In 1929, Walter first reported ligation of the gastric coronary vein, following which several types of devascularization procedures were followed. Among them, splenectomy plus esophagogastric devascularization (EGDV) is the most effective [6]; hence, it has become the first treatment choice in portal hypertension complicated with thoracic esophageal varices and bleeding, in China. In terms of clinical research development, especially the anatomical study of the lower esophagus and cardia, selective esophagogastric devascularization (s-EGDV) has gained more popularity. s-EGDV is an improved surgical method based on traditional pericardial devascularization; s-EGDV only devascularizes the branch veins that enter the esophagus and stomach wall. Compared with traditional pericardial devascularization, s-EGDV not only devascularizes the branch veins to prevent bleeding but also retains the integrity of the gastric coronary vein and paraesophageal veins and maintains spontaneous portacaval shunt. The selective process guarantees spontaneous shunt of the body’s part of the portal vein and ensures the direction of blood flow from the gastric coronary vein to the paraesophageal veins to the semi-azygos vein. Portoazygous spontaneously shunt, which forms a shunt between the portal and azygos vein, offers a compensatory mechanism, as the resulting blood flow is reasonable, appropriate, and physiologically compatible. It can maintain the necessary hepatic blood flow and appropriately reduce portal vein pressure to achieve a dynamic balance. It is different from the man-made spleen-renal shunt or portal vein-vena cava shunt, this spontaneously shunt should be retained. s-EGDV can preserve this spontaneous shunt on the basis of devascularization, which can achieve combined operation of the shunt and devascularization. Some randomized controlled trials (RCTs) and observational clinical studies (OCSs) were conducted to address this issue. Several published studies have shown convincing results in recent years. Therefore, this meta-analysis aimed to compare the perioperative outcomes and postoperative complications between s-EGDV and n-sEGDV. 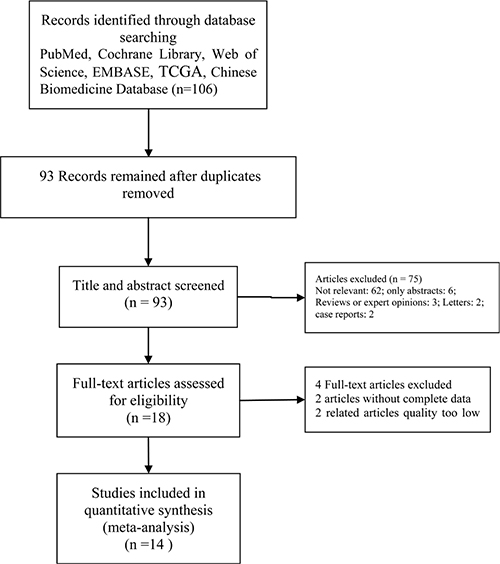 The following studies were included: (1) those that compared the perioperative outcomes and postoperative complications between s-EGDV and n-sEGDV for cirrhotic patients with portal hypertension complicated with thoracic esophageal varices and bleeding; and (2) those that were the most recent publication in the case of multiple similar reports.

The following studies were excluded: (1) those wherein the detailed surgical type was not reported; (2) those with no comparison of s-EGDV and n-sEGDV; (3) those in which the study outcomes did not include complete or available perioperative outcomes and postoperative data; (4) those which reported data used in a later study; and (5) case reports, abstracts, letters, comments, reviews, guideline articles without original data, and studies that presented insufficient data.

Meta-analysis was conducted with Review Manager (version 5.3.0) software. Odds ratios (ORs) were used to analysis the dichotomous variables and 95% confidence interval (CI) values were reported. The Mantel-Haenszel, Chi-square, and I2 tests were used to test the heterogeneity between studies. I2 > 50%, this suggested significant heterogeneity, a random effects model was applied. If I2 < 50%, this suggested not significant heterogeneity, a fixed effects model was applied. If P < 0.05, this considered statistically significant. Funnel plots were used to evaluate potential publication bias.

Characteristics of the included studies and quality assessment

14 studies (seven randomized clinical trials RCTs and seven retrospective cohort studies) were included in this meta-analysis. The total number of patients was 1637, of whom 766 was s-EGDV group and 871 was n-sEGDV group. The detailed characteristics of all the included studies are shown in Table 2.

Table 2: The characteristics of all the included studies

RCT = randomized controlled trial; OCS: retrospective cohort studies. Jadad scale system: The Jadad scale, sometimes known as Jadad scoring or the Oxford quality scoring system, is a procedure to independently assess the methodological quality of a clinical trial. It is the most widely used such assessment in the world; The system was used to assess randomization, concealment of allocation, blinding, and withdrawals in the study. Each item was given a score of 0–2 and 7 score in total. If the total score was ≥4, the RCT was of high quality. The Newcastle-Ottawa System: The quality of the nonrandomized studies was assessed by using this System, The quality of the studies was evaluated by examining three items: patient selection, comparability of groups, and assessment of outcome. Each study was given 9 score in total; if the total score was ≥7, the OCS was considered to be of high quality

Assessment of the risk of bias of RCTs

For the included RCTs, assessment of the bias risk involved six parameters: allocation concealment, incomplete outcome data, blinding, selective reporting bias, sequence generation, and other potential sources of bias. Assessment was based on a quality checklist recommended in the Cochrane Handbook. “Yes” indicated a “low” risk of bias; “unclear,” an “uncertain” risk of bias; “no,” a “high” risk of bias (Figure 1). 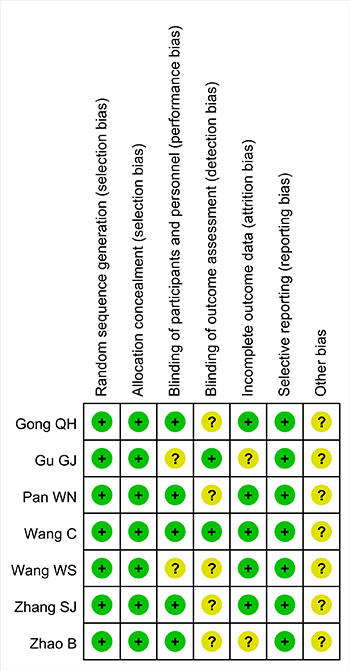 The reduction of PVF

Figure 2: Meta-analysis of the reduction of PVF. 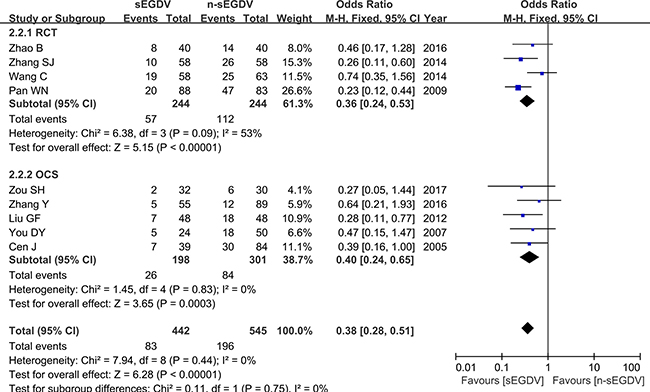 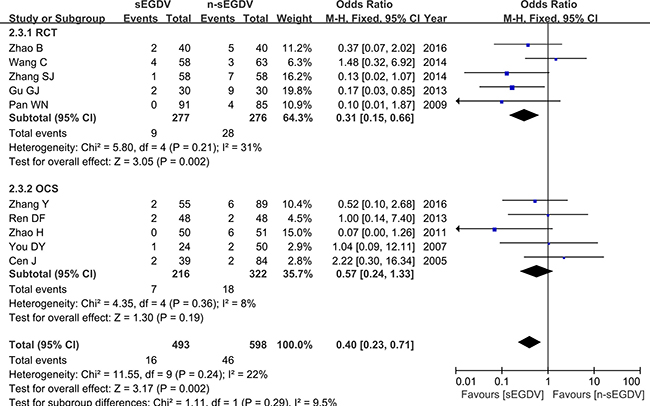 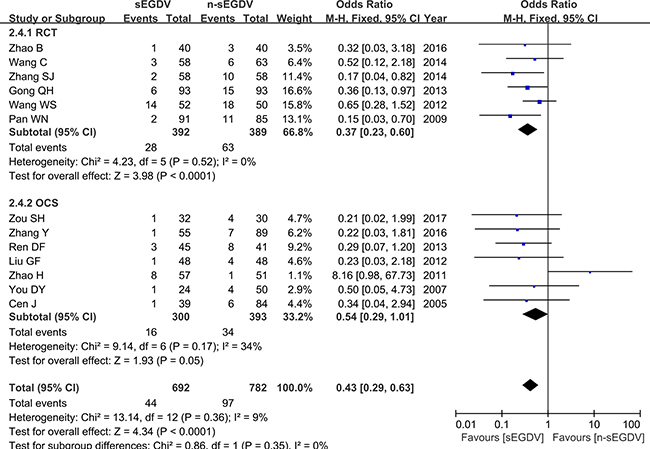 Eight included studies reported the postoperative mortality three year after operation. The results of meta-analysis show that there is significant difference between two groups in the incidence of postoperative mortality (OR = 0.52; 95% CI, 0.32–0.85; P = 0.009; I2 = 0% for heterogeneity), Therefore, using a Fixed model (Figure 8). 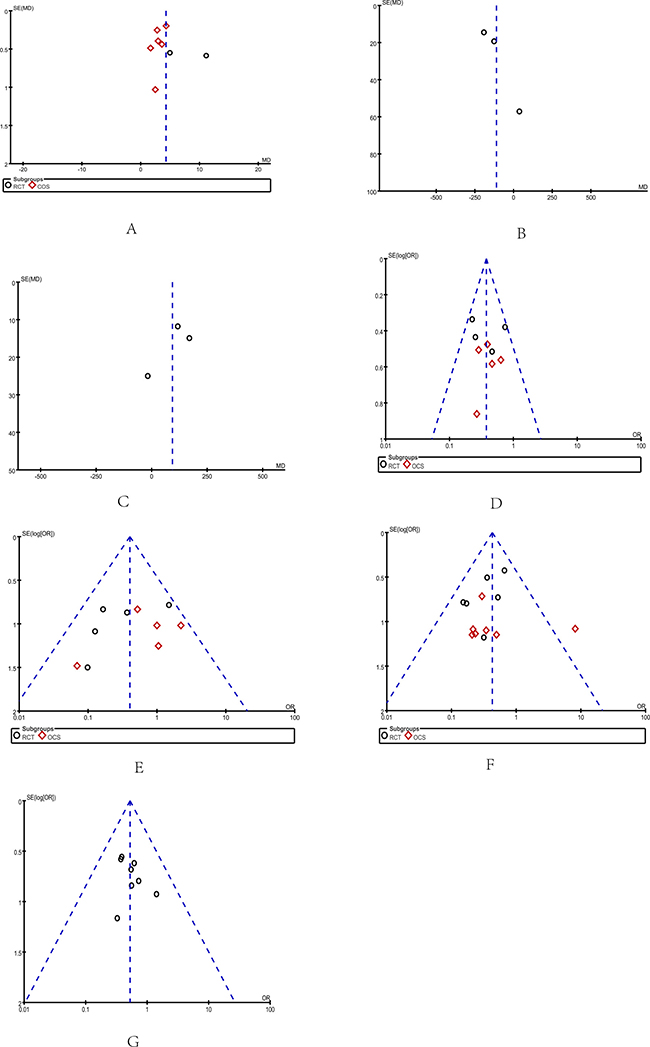 Figure 9: Funnel plots: Funnel plots were created to assess the publication bias in our meta-analysis of included studies. In the absence of publication bias, it assumes that studies with high precision will be plotted near the average, and studies with low precision will be spread evenly on both sides of the average, creating a roughly funnel-shaped distribution. (A) Reduction of PVF (B) Portal vein flow (C) Hepatic artery flow (D) Portal hypertensive gastropathy (E) Hepatic encephalopathy (F) Postoperative re-bleeding (G) Postoperative mortality

Surgical treatment for liver cirrhosis complicated with portal hypertension mainly focuses on the prevention and treatment of esophageal varices bleeding, elimination of ascites, reduction of complications, and improvement in the overall quality of life [21]. An important factor to consider for evaluation of surgical approach for the treatment of portal hypertension is portal blood flow reduction as well as maintenance of hepatic blood inflow to prevent liver dysfunction and hepatic encephalopathy. There was a statistically significant difference in the PVF reduction between the two groups analyzed in this report. The results of our meta-analysis show that sEGDV was superior to n-sEGDV in reduction of PVF. Confirmed the effect of spontaneous portacaval shunt in decrease the PVF.

sEGDV preserves the continuous of portoazygous spontaneously shunt can alleviate visceral congestion and reduce the incidence of portal vein thrombosis and portal hypertensive gastropathy, thereby increasing the incidence of postoperative portal hypertension gastropathy [23–25]. This meta-analysis also confirmed that sEGDV was superior to n-sEGDV in reducing the rate of postoperative portal hypertension gastropathy. Compared to PSS, esophagogastric devascularization had no significant effect on the blood flow and function of the liver, which can prevent hepatic encephalopathy after operation. Our study showed that no significant difference existed between the sEGDV and n-sEGDV groups with respect to the rate of postoperative hepatic encephalopathy.

The reduction in the rate of re-bleeding resulting from moderation of hyperpressure of the portal vein should also be considered. Splenectomy significantly reduces the blood flow of the portal vein and decreases portal venous pressure. The traditional esophagogastric devascularization completely blocks the area around the esophagus and gastric fundus blood vessels and promotes the formation of new traffic branch veins of the portal vein and the azygos venous system, eventually leading to recurrence of esophageal varices and bleeding. Selective devascularization avoids the complete disconnection of shunt vessels and preserves the continuity of the portoazygous spontaneously shunt. Therefore, sEGDV can decrease the recurrence rate of varicose veins and rate of re-bleeding. The result of our meta-analysis also confirmed that sEGDV was superior to n-sEGDV in reducing the rate of postoperative re-bleeding.

The postoperative mortality was significantly lower in the sEGDV group than in the n-sEGDV group [26–27]. This may be due to lower incidence of re-bleeding and hepatic encephalopathy in the sEGDV group. Thus, sEGDV was a more effective treatment with fewer complications for portal hypertension complicated with thoracic esophageal varices and bleeding than n-sEGDV. However, the paraesophageal veins cannot be preserved in every patient. If the vein trunk of the paraesophageal veins directly enter the esophageal wall, or it is difficult to identify the paraesophageal vein due to the varicose vessels from the venous plexus or bolus, then it should be devascularized from the beginning of the gastric coronary vein to ensure that the abnormal blood flow to the esophagogastric varices is blocked, to control and reduce the fatal variceal bleeding.

A major limitation of our meta-analysis is that it only included a small number of high-quality RCTs, all coming from the same country—China. Another potential limitation is that surgical experience and methods used at different hospitals and specialist centers could have produced different outcomes and increased the heterogeneity between the included studies. In addition, the treatment of complications may have affected the outcome of the RCTs and OCSs included in this meta-analysis.

7. Zhao B, Cheng QB. Clinical analysis of selective pericardial devascularization in the treatment of portal hypertension. Hennan journal of surgery. 2016; 22:11–13.