Vulvar cancer accounts for an important share of all gynecological malignancies [1]. In Germany, 4% of gynecological cancers involve a cancer of the vulva [2]. Approximately 3,200 cases were reported in this country in 2012, and this number is supposed to have increased to 4,400 cases in 2016 [3]. Therefore, vulvar cancer has an increasing impact on health and its associated economy in Germany.

A delay in the diagnosis of vulvar cancer has been reported in the literature and seems to result from a lack of specificity of symptoms at the early stages of the disease. Such delay has been found to vary from 6 to 22 months in studies performed in recent decades [4–8]. When symptoms are present, they involve skin thickening, pruritus, pain, burning sensations, bleeding or discharge unrelated to the normal menstrual cycle, open sores, and lumps [4, 9]. Pruritus, a symptom frequently associated with most vulva diseases, is particularly common in vulva dystrophy (e.g., lichen sclerosus and eczema), menopause, and bacterial or fungal infections. Contact dermatitis is also frequently found in Western countries due to an increased use of topical products potentially harmful to the vulva [10]. Interestingly, a German analysis including 208 patients affected by vulva disorders further showed that 63.9% of the population was diagnosed with inflammatory diseases [11]. Another condition that shares similar symptoms with vulvar cancer is postmenopausal vulvovaginal atrophy (VVA), a disorder associated with a deficiency in estrogen. Corroborating recent results published by the North America Menopause Society [12], the prevalence of VVA symptoms was estimated at 40% in Germany, with half of the afflicted women describing their symptoms as either moderate or severe [13]. Finally, vulvovaginal candidiasis, a common vulva disorder found in 30-50% of the population, may also lead to a delay of vulvar cancer diagnosis [14].

This retrospective study is based on data from the Disease Analyzer database (QuintilesIMS), which compiles demographic, clinical, and pharmaceutical data obtained in an anonymous format from computer systems used in clinical practices [15]. The quality and exactness of the data (e.g., diagnoses and drug prescriptions) are regularly assessed by QuintilesIMS. Using prescription statistics for several drugs and age groups for several diagnoses, the Disease Analyzer database was found to be a representative database of clinical practices in Germany [15]. Finally, several studies focusing on female cancers and using the same database have already been published [16, 17].

Figure 1 shows the patient selection process. The current study sample included 1,652 women from 218 gynecological practices who received an initial diagnosis of vulvar cancer (ICD 10: C51) between January 2000 and December 2015 (index date) and no prior cancer diagnosis. Patients were excluded if they had been diagnosed with any other cancer (C00-99) prior to vulvar cancer diagnosis. In order to guarantee the accuracy of diagnoses and enable the analysis of pre-diagnoses, patients with an observation period prior to their index date of less than 365 days were excluded. After applying these exclusion criteria, 505 vulvar cancer patients were included in the study. During the index period, 1,950,330 women observed in these 218 gynecological practices had no cancer diagnosis. After applying similar exclusion criteria, 569,648 non-cancer patients were eligible to be included in the present investigation. Finally, 505 non-cancer controls were matched (1:1) to vulvar cancer cases based on age (in years), health insurance status (private versus statutory health insurance coverage), and index date. In the control group, a random date (medical visit) was selected and designated the index date, ensuring an observation period prior to the index date of at least 365 days. When more than one matched individual was available in the control group for one vulvar cancer patient in the case group, one of these controls was randomly selected. 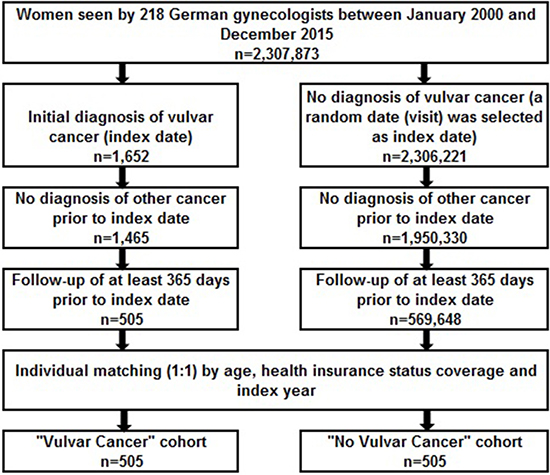 The primary outcome was the potential delay in vulvar cancer diagnosis in women who had received an initial diagnosis of diseases of Bartholin’s gland (N75), inflammation of vagina and vulva (N76), or other specified noninflammatory disorders of vulva including atrophy, hypertrophy, and cyst (N90.5-90.9) in the year prior to the vulvar cancer diagnosis.

Descriptive analyses were obtained for age, index year, and health insurance coverage using paired t-tests, Wilcoxon-tests for paired samples or McNemar’s tests. A logistic regression model was used to estimate the association between vulvar cancer and pre-defined diagnoses (diseases of Bartholin’s gland, inflammation of vagina and vulva, or other specified noninflammatory disorders of vulva including atrophy, hypertrophy, and cyst). The following diagnoses known to be associated with a higher risk of vulvar cancer were included as co-variables: vulva dysplasia (N90.0–90.3), leukoplakia of vulva (N90.4) and benign neoplasm of vagina (D28.1). P-values < 0.05 were considered statistically significant. The analyses were carried out using SAS version 9.3.

Table 1: Characteristics of patients with vulvar cancer and controls treated in gynecological practices in Germany

**Only diagnoses documented within 12 months prior to the index date were considered.

*Adjusted for vulva dysplasia, leukoplakia of vulva, and benign neoplasm of vagina.

Few authors have studied the duration between first symptoms and final diagnosis in women with vulvar cancer. In 1997, Rosén and Malmström discovered in 328 patients with histologically confirmed primary invasive vulvar cancer that they experienced symptoms during an average of 16.3 months before diagnosis was made [4]. The most frequent symptoms were pruritus, smarting pain, and vulva tumor. Stages I, II, III, and IV accounted for 35%, 37%, 15%, and 13% of individuals with squamous cell carcinomas, respectively. Tumor stage was found to be negatively associated with survival. Later, a UK study including 506 individuals with carcinoma of the vulva estimated that diagnosis was delayed by more than a year in approximately one out of five women [18]. The number of symptoms and their duration were further found to have no significant impact on survival.

In 1999, Jones and Joura evaluated clinical events preceding the diagnosis of squamous cell carcinoma of the vulva [5] and showed in this New Zealand study including 102 women that 88% of them experienced vulva symptoms for more than six months and 28% of them for more than five years. Interestingly, abnormal skin adjacent to the tumor was found in 85% of the population, and 31% of women had at least 3 medical consultations for vulva symptoms prior to the diagnosis of vulvar cancer. Finally, 25% of patients underwent vulva biopsy, and these patients were more likely to present stage 1 disease than those without vulva biopsy. Finally, Voliovitch et al. aimed to analyze the clinical features of Israeli patients affected by squamous cell carcinoma of the vulva [19]. The authors discovered in 150 women that pruritus was the most frequent symptom. Corroborating previous studies, a considerable time lag was observed from onset of symptoms to diagnosis.

More recently, in 2009, Lanneau and colleagues discovered in 56 patients under the age of 45 that 47% of this population presented symptoms for more than 12 months prior to the diagnosis of vulvar cancer [7]. It was further estimated that the delay between first symptoms and final diagnosis correlated with neither stage nor positive lymph nodes. Two years later, a Danish study including 161 women with gynecological cancers who had responded to four different questionnaires found that median total delay was 101 days [8]. Gynecological cancers included ovarian, endometrial, cervical, and vulvar cancers. Approximately 10% of the population exhibited a delay of at least 436 days. Vulvar cancer was further associated with the longest delay, while ovarian cancer was associated with the shortest delay. In this analysis, more than one third of individuals consulted their general practitioner for trivial symptoms, not for alarming symptoms. Moreover, physicians were less likely to perform gynecological examinations when vaginal bleeding was absent, although the length of delay was shortened when such an examination was conducted.

In line with these various works, the present German study comprising 1,010 women included between 2000 and 2015 showed that a potential delay in the diagnosis ranged from around six to 11 months. An interesting finding of this retrospective analysis is that such delay varied with the initial diagnosis given by gynecologists, with inflammation of vagina and vulva being associated with the longest delay and diseases of Bartholin’s gland with the shortest delay. Although diseases of Bartholin’s gland were diagnosed in less than 1% of the population, potentially causing an inaccurate estimation of the associated delay, such difference in delays may be explained by a difference in the symptomatology presented by women with these various benign vulva disorders. As no evidence in the literature has yet supported this hypothesis, such a finding must be interpreted with great caution.

A delay in vulvar cancer diagnosis may also be caused by other reasons, such as physical disability of some patients, fear of special exams, or reluctance to get gynecological exams. Patients may also fail to recognize cancer symptoms or act on them. Furthermore, diagnostic delay may also occur if several invasive procedures are needed to confirm the diagnosis [20].

Retrospective primary care database analyses are generally limited by the validity and completeness of the data on which they are based. The present study was subject to several limitations, such as the assessment of vulvar cancer and co-morbidities, which relied solely on ICD codes entered by gynecologists. Furthermore, data pertaining to socioeconomic status (e.g., education and income) and lifestyle-related risk factors (e.g., physical activity) were also lacking. Furthermore, no documentation is provided on how the cancer diagnoses were made; however, in Germany, cancer diagnoses are usually confirmed by hospitals. Finally, the database is representative of resident physicians and does not include data from hospitals.

Overall, potential mean delay of vulvar cancer diagnosis ranged from 186 to 328 days. Further research is needed to gain a better understanding of the impact of benign vulva disorders on this delay. Such research could lead to an improvement in the management and treatment of women newly diagnosed with vulvar cancer. Moreover, enabling access to specialist expertise (like university clinics) through prompt referrals should help prevent delays in cancer diagnosis.

This work is a retrospective study which does not include experimental animals or human patients. For retrospective data analyses with anonymous data, no ethical approval is needed in Germany.