C-Kit protein is a transmembrane tyrosine kinase (TK) receptor (c-KitR-TK), which is predominantly expressed on mast cells (MCs) playing a role in tumor angiogenesis. It could be also expressed on epithelial breast cancer cells (EBCCs), but no data have been published regarding the correlation between mast cells positive to c-KitR (MCs-c-KitR), EBCCs positive to c-KitR (EBCCs-c-KitR), BC angiogenesis in terms of microvessel density (MVD) and the main clinic-pathological features. This study aims to evaluate the above parameters and their correlations in a series of selected 121 female early BC patients. It has been found a strong correlation between MVD and MCDPT, and MCs-c-KitR, MVD and MCs density positive to tryptase (MCDPT), and MCs-c-KitR and MCDPT by Pearson correlation. These data suggest an involvement of both MCDPT and MCs-c-KitR in BC tumor angiogenesis. Furthermore, BC tissue expressing c-KitR could be a putative predictive factor to c-KitR-TK inhibitors. In this way, selected patients with higher MCs-c-KitR could be candidate to receive c-KitR-TK inhibitors (e.g. masitinib, sunitinib) or tryptase inhibitors (e.g. nafamostat mesilate, gabexate mesilate).

C-KitR is the transmembrane tyrosine kinase (TK) receptor (c-KitR-TK) for stem cell factor (SCF), a cytokine regulating important functions of MCs such as proliferation and degranulation that in turn stimulate angiogenesis [1, 2]. C-KitR could be expressed also in other stromal cells, such as myofibroblasts and adipocyte cells, and epithelial breast cancer cells (EBCCs) stimulating proliferation. Several published studies showed that EBCCs positive to c-KitR (EBCCs-c-KitR) are low (from 10% to 29%) or absent in invasive breast cancer (IBC) [3–11]. In agreement, a progressive decrease and almost complete loss of EBCCs-c-KitR have been reported during the progression of normal tissue to BC [7, 8, 11–13]. Furthermore, EBCCs-c-KitR have been reported to be associated with more indolent cancer behavior [3, 6]. However, a small body of evidence suggests that EBCCs-c-KitR might represent an independent negative prognostic factor [4, 5, 10, 14–17]. Notably, c-KitR overexpression in IBC appeared to be an indicator of high-grade cancer resulting in poor prognosis [18]. This evidence suggests that c-KitR expression may play a role in BC progression. C-KitR expression has been also found increased in malignant breast phyllodes tumors (BPT), uncommon stromalepithelial lesions with different potential of malignancy [7, 8, 19–25]. For what concern the role of EBCCs-c-KitR and tumor angiogenesis, very little data have been published and only one study explored the relationship between EBCCs-c-KitR and microvascular density (MVD) demonstrating a negative correlation [3]. With special regard to MCs positive to c-KitR (MCs-c-KitR), a lot of in vitro data demonstrated that MCs play a role in tumor angiogenesis [26–31]. In particular, MCs stimulate angiogenesis by several mechanisms including c-KitR activation leading to the release of a plethora of angiogenic factors, contained in their cytoplasmic secretory granules [32, 33]. Among them, the most powerful factor is tryptase [32, 34]. Tryptase, acting on the proteinase-activated receptor-2 (PAR-2) by its proteolytic activity, has angiogenic activity stimulating both human vascular endothelial and tumor cell proliferation in paracrine manner, helping tumor cell invasion and metastasis [30, 35]. In in vivo studies it has been also shown that MCs density positive to tryptase (MCDPT) is strongly related to angiogenesis in several animal and human malignancies [2, 28, 33, 36–50]. With concern to early BC patients, we already demonstrated a strong correlation between high serum tryptase levels before surgery (STLBS) and MVD, STLBS and MCDPT, MCDPT and MVD [40].

To the best of our knowledge, no data have been published regarding the correlation between EBCCs-c-KitR, MCs-c-KitR, BC angiogenesis and clinico-pathological features. In the current study we aim to evaluate the primary tumor tissue status of the above parameters to perform any possible correlation to each other and with clinico-pathological characteristics in a series of 121 female early BC patients. Adjacent normal breast tissue has been also evaluated in terms of MCDPT, MVD, MCs-c-KitR and normal breast epithelium-c-KitR (NBE-c-KitR) expression. Finally, difference between the all the evaluated parameters in tumor tissue and adjacent normal breast tissue has been also assessed.

Data obtained from tumor tissue using light microscopy and image analysis system (Quantimet500 Leica, Wetzlar, Germany) [33] show the following mean ± 1 s.d.: MCDPT 7.49±2.81 (Figure 1A), MVD 29.41 ± 6.63 (Figure 1B), MCs-c-KitR 8.75 ± 3.26 (Figure 1C) and EBCCs-c-KitR 32.98 ± 16.61 (Figure 1D) (Table 2). MCs appear as round or spheroidal cells with a diffuse cytoplasmic red staining using the anti-tryptase antibody and with a filiform peripheral cell membranous intense staining using the anti-c-KitR and a blue spheroidal central nucleus. MCs are found as scattered cells (Figure 1A) or as cluster formation near and around microvessels that sometimes showed several red blood cells in their lumens (Figure 1C). Furthermore, microvessels appear as red immunostained structures and often their lumen is visible using the anti-CD34 antibody (Figure 1B). With special reference to EBCCs, a part of them shows a red strong filiform membranous staining utilizing the anti-c-KitR antibody (Figure 1D). 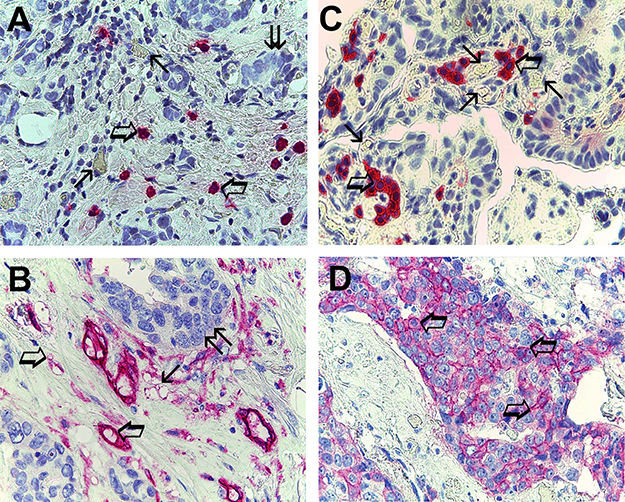 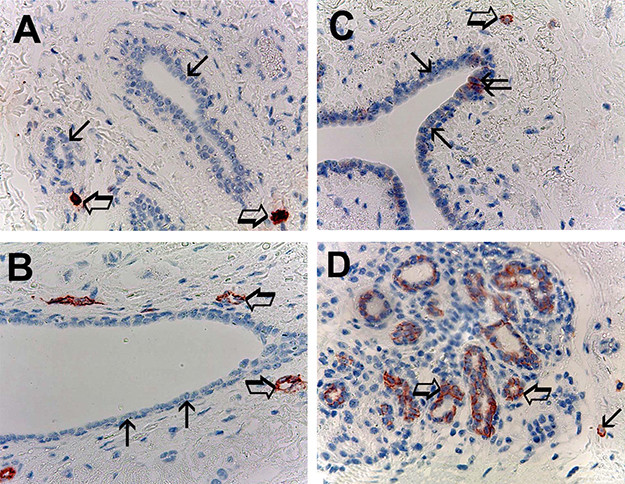 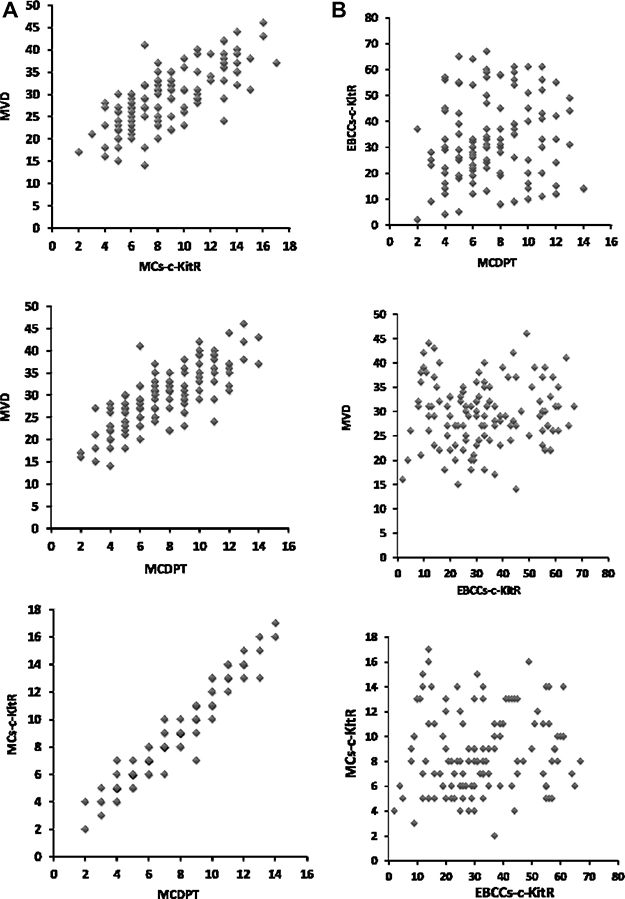 C-KitR, also known as CD-117 (according to cluster differentiation nomenclature) is the receptor for SCF, a cytokine regulating important functions of MCs such as proliferation and degranulation that in turn stimulate angiogenesis [1, 2]. In particular, c-KitR-mediated MCs activation has been shown to induce tumor angiogenesis by the release of tryptase, the most powerful pro-angiogenic factor stored in MCs granules. In a pre-clinical model tryptase induces in vitro endothelial cells (ECs) proliferation in a matrigel assay and displayed in vivo capillary growth in the chick embryo chorioallantoic membrane, which was suppressed by tryptase inhibitors. In addition, tryptase can act on PAR-2 that can be expressed on epithelial cells stimulating cell proliferation of cancer cells in paracrine manner, potentiating invasion and metastasis [27–32, 51].

With special regard to IBC, several evidences suggested that EBCCs-c-KitR are low (from 10% to 29%) or absent [3–11]. Consistently, a progressive decrease and almost complete loss in EBCCs-c-KitR have been showed during the progression of normal tissue to BC [11–13]. In fact, c-KitR is expressed by non-malignant epithelial rather than malignant epithelial breast tissue employing immunohistochemistry [7, 8]. Furthermore, EBCCs-c-KitR are related to a more indolent cancer behavior: high disease free survival, low grading, metastatic lymph nodes negative, receptor (ER, PgR, HER2neu) positive status [3, 6]. Conversely, some studies demonstrated that EBCCs-c-KitR may represent an independent factor of poor prognosis [5], as they are associated with receptor (ER, PgR, HER2neu) negative status, basal-like phenotype, BRCA1 mutation, positive metastatic lymph nodes positive, high grading, ki67 and mitotic index [4, 10, 14–17]. Of note, Kondi-Pafiti et al. observed that EBCCs-c-KitR are decreased in IBC and they appeared to be a marker of high-grade IBC, correlating with poor prognosis [18]. In particular it has been demonstrated that c-KitR may be expressed in breast myoepithelial cells and sometimes in some macrophages and smoothmuscle cells of vascular walls. Amin et al. evaluated the relationship between EBCCs-c-KitR and microvascular density (MVD), showing that the loss of EBCCs-c-KitR is associated with high MVD and some markers of tumor aggressiveness (higher tumor grade, larger size, and more lymph node metastasis) [3]. In this context there are no studies evaluating the correlation between c-KitR-MCs and MVD in BC patients. Therefore, we aimed at verifying the presence of a correlation between MCs-c-KitR and EBCCs-c-KitR, MCDPT, MVD to each other in 121 female early BC patients. Our results demonstrated a strong and significant correlation between MVD, MCs-c-KitR and MCDPT. With reference to this finding, it must be considered that the number of c-KitR expressing cells may be slightly greater than MCDPT in that several stromal cells (such as myoepithelial cells, macrophages and smooth muscle cells) can also result positive to c-KitR expression. Moreover, we observed a significant difference in terms of MCDPT, MVD, MCs-c-KitR, EBCCs-c-KitR vs NBE-c-KitR (p = 0.02) in tumor tissue vs adjacent normal tissue.

Taken together, the above evidences confirm the involvement of both MC tryptase and MCs-c-KitR in BC tumor angiogenesis. Additionally, the lack of correlation between increased MVD and high percentage of EBCCs-c-KitR suggests that clones of malignant EBCCs positive to c-KitR probably are not involved in tumor angiogenesis. Therefore, c-KitR and tryptase expressing MCs could represent a novel surrogate angiogenic marker in BC patients. Finally, they could also be identified as a new potential anti-angiogenetic target for several c-KitR-TK inhibitors (e.g. masitinib, sunitinib) or tryptase inhibitors (e.g. nafamostat mesilate, gabexate mesilate).

The clinico-pathological features of the patients are summarized in the Table 1. A series of 121 BC patients observed at the Clinical Surgery Unit of the “Magna Graecia” University of Catanzaro were selected. Biopsy specimens were collected from 121 female BC patients who had undergone BC surgery. Patients were selected accordingly the presence of a primary, invasive breast tumor (stage T1-T3), the presence or not of metastases in axillary lymph nodes (stage N0-N2), the absence of distant metastases (M0), the presence of unilateral breast cancer and the absence of previous or concomitant primary cancer. Patients were staged according to the International Union Against Cancer Tumor Node Metastasis (UICC-TNM) classification [31]. They not received neo-adjuvant therapies. Surgical treatment performed was either a modified radical mastectomy (44 patients in which the tumor had a diameter > 3 cm) or a quadrantectomy with axillary lymphadenectomy. No patient was subjected to the investigation of sentinel lymph node. Following surgery, a course of 5–6 weeks of radiation therapy (77 patients) was performed. On the basis of clinico-pathological features patients were evaluated to receive adjuvant hormonal therapy or chemotherapy or both. Full ethical approval and signed consent from individual patients were obtained to conduct the study. The full name of ethics institutional committee review board that approved our study is: University Hospital Ethics Committee “Mater Domini”, Germaneto, Catanzaro, Italy.

Table 1: MCDPT, MVD, MCs-c-KitR and EBCCs-c-KitR as a function of clinico-pathological characteristics in a series of 121 breast cancer patients

The histological diagnosis was made on haematoxylineosin-stained slides and histopathological grading was performed according to the criteria described by Bloom and Richardson, as well, moderately and poorly differentiated state [32]. For the evaluation of MCDPT, MVD, MCs-c-KitR and EBCCs-c-KitR a three-layer biotin-avidin-peroxidase system was utilized [33]. Briefly, six-μm-thick serial sections of formalin-fixed and paraffin-embedded of tumor tissue and adjacent normal breast tissue were cut. Then, sections were microwaved at 500 W for 10 min, after which endogenous peroxidase activity was blocked with 3% hydrogen peroxide solution. Adjacent sections were stained with human-specific monoclonal antibodies anti-tryptase (clone AA1; Dako, Glostrup,Denmark) diluted 1:100 for 1 h at room temperature, with anti-CD34 (QB-END 10; Bio-Optica Milan, Italy) as pan-endothelial marker diluted 1:50 for 1 h at room temperature and with the rabbit polyclonal antibodies anti-CD117 to c-KitR (Dako, Glostrup, Denmark) diluted 1:100 at for 1 h at room temperature [2]. The bound antibody was visualized using a biotinylated secondary antibody, avidin-biotin peroxidase complex and fast red. Nuclear counterstaining was performed with Gill’s haematoxylin no. 2 (Polysciences, Warrington, PA, USA). The primary antibody was omitted in negative controls.

The correlations between the above indexes and the clinico-pathological features listed in Table 1 were analyzed by the Chi-square test. All statistical analyses were performed with the SPSS statistical software package (SPSS, Inc., Chicago, IL).

This work was supported by a grant of “Fondi della Ricerca Corrente 2016” assigned to Istituto Tumori “Giovanni Paolo II” (Bari) dished out by the Italian Ministry of Health.