Introduction: Tyrosine kinase inhibition of the epidermal growth factor receptor (EGFR) is the standard in the first line treatment of patients with advanced non-small–cell lung cancer (NSCLC) harbouring EGFR activating mutations. Here we aim to discern efficacy and toxicity measures through a meta-analysis of published studies that could aid treatment selection.

Materials And Methods: We performed a meta-analysis of the main randomized clinical trials evaluating the currently approved EGFR-TKIs in first-line of treatment of EGFR-positive advanced NSCLC. Cochrane guidelines were used for statistical analysis.

Conclusions: Our results suggest similar clinical efficacy and higher toxicity of Afatinib treatment. As this still remains the agent with best CSF penetration, we suggest its use is limited to patients presenting with brain metastasis. We suggest the use of Gefitinib in patients without CNS involvement. Faced with the impossibility to dose-reduce Gefitinib, Erlotinib represents a tolerable and effective alternative to Afatinib and Gefitinib if response to EGFR inhibition is considered still effective.

Non-small-cell lung cancer (NSCLC) is the major cause of cancer-related death worldwide [1]. The Epidermal Growth Factor Receptor (EGFR), a transmembrane glycoprotein, is mutated in approximately 10–15% of European patients, more frequently in women, adenocarcinoma type and never-smokers [2]. When the EGFR gene is mutated, (most commonly with exon 19 deletions or exon 21 L858R point mutation), constitutive receptor activation influences the cell cycle, the apoptotic pathway and the production of inflammatory agents [3]. This understanding of EGFR signalling led to the development of specific tyrosine-kinase inhibitors (TKIs) [4], which reached three generations: gefitinib and erlotinib (first); afatinib, dacomitinib, and neratinib (second); rociletinib, HM61713, osimertinib and others (third). The last generation overcomes the threonine-to-methionine substitution (T790M) in exon 20 of the EGFR gene, responsible for 50% of resistance mechanisms to first line anti-EGFR therapy with first and second generation agents [5]. Only gefitinib, erlotinib, and afatinib are approved by Food and Drug Administration (FDA) thus far for the first line setting [6–8].

In patients whose tumours harbours an activating EGFR mutation, EGFR TKIs should be used as first-line therapy [6–9], whereas for the rest of NSCLC cases, standard treatment currently consists of platinum-based doublet chemotherapy. Gefitinib, erlotinib and afatinib show higher response rates and longer progression free survival than chemotherapy in those patients, as tested in several clinical trials exhibiting consistent results [10–20], all of them favouring the target therapy.

Since there are several similar drugs targeting the EGFR mutation in NSCLC first line setting, the critical question emerging is which one should be best for this setting. Our analysis presents the findings of a network meta-analysis, attempting to access the main outcomes among EGFR TKIs in NSCLC, exploiting the data of clinical trials with gefitinib, erlotinib and afatinib. Recently, the Lux-Lung 7 study reported longer PFS and similar OS when comparing Afatinib with Gefitinib, but a triple arm comparison of all these agents is unlikely to occur. Here we aimed to provide an indirect comparison among these drugs which may contribute to guide the drug choice for physicians.

For this comparative meta-analysis, we performed computerized searches of the Medline. Embase, Scopus and Information Sciences Institute (ISI) databases up to August 14, 2016, using the following terms: “gefitinib” OR “afatinib” OR “erlotinib” AND “NSCLC” OR “lung cancer” OR “epidermal growth factor”. These searches were complemented by examining review articles. Only articles published in English, available in full text and reporting results of randomized, double-arm, phase III clinical trials comparing EGFR-TKIs with chemotherapy regimens were included. The most recent –updated- data of the studies were used for the meta-analysis. For gefitinib, erlotinib and afatinib, only first line treatments were considered due to the paucity of trials comparing these agents to chemotherapy in second line. There were no time restrictions in the search. Exclusion criteria were: trials with patients presenting Eastern Cooperative Oncology Group (ECOG) performance status > 2 and those including EGFR TKI plus chemotherapy versus chemotherapy (Effectiveness of EGFR-TKIs may be obscured in this setting). Case reports or patient series, which report few patients, were excluded. All abstracts were screened twice and unrelated studies were excluded.

For included trials, we extracted data on: title, first author, year of publication, study design (inclusion and exclusion criteria), patient’s characteristics (median patient age, stage of disease, performance status, gender, smoking status, histology, tissue-assessed EGFR mutation), treatment schedules and line of treatment, outcomes from the trial, incidence of adverse events, demographic data. If the study was updated, main outcomes were extracted from the last published article. Data extraction was done independently by two of the authors and divergences were resolved by consensus with a third author.

ORR was defined as the proportion of patients who presented complete or partial response, assessed by Response Evaluation Criteria in Solid Tumours (RECIST) [21] in most of the studies. The time of assessment varied for each trial. PFS was the time, in months, from the randomization until disease progression, or death. OS was the time, in months, from the randomization to death. AE could be any unfavourable and unintentional sign, symptom, or disease temporarily associated with the use of the drugs, without any judgment about causality or relationship to them. Relevant adverse events of all grades related by two or more studies were condensed by each EGFR TKI arm and compared as meta-estimation with another EGFR TKI.

Statistical analysis was directed by Cochrane Guidelines [22]. We combined the risk ratios from each study using the random-effects model (Mantel-Haenzsel) [23]. For the hazard ratios, the Inverse Variance method was used. The heterogeneity between trials was estimated by the I² statistic. We used the Review Manager version 5.3.5. 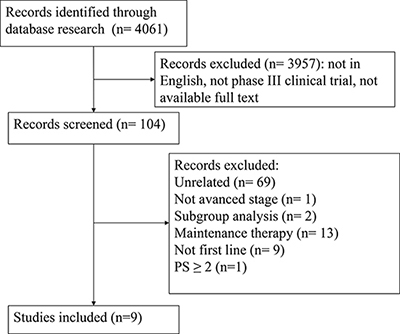 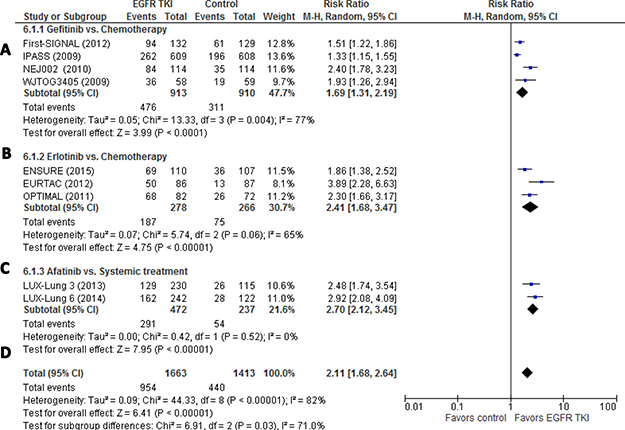 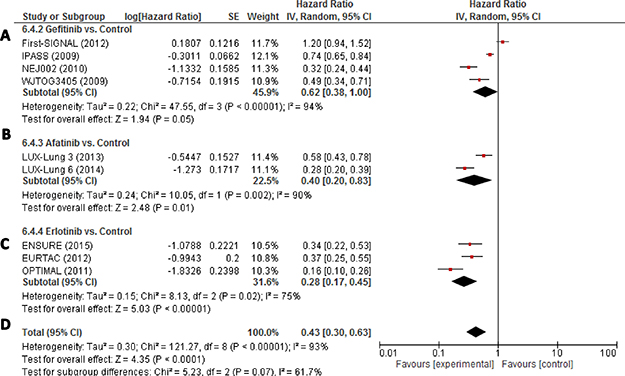 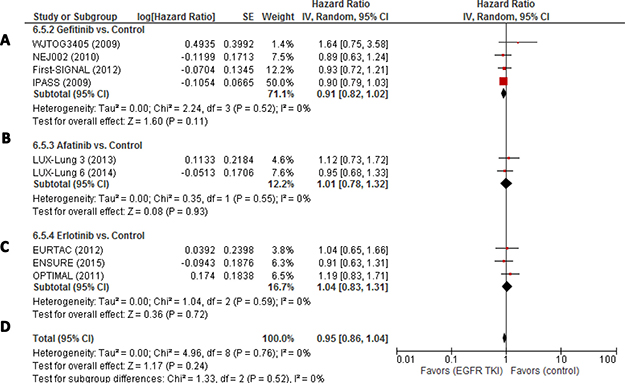 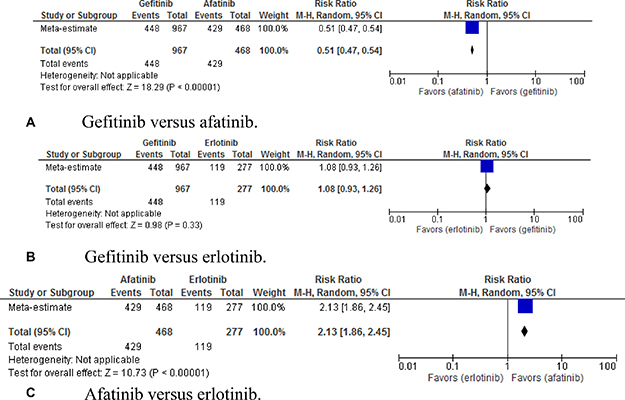 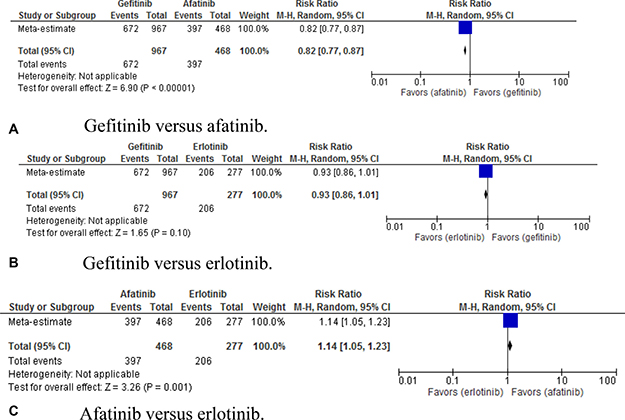 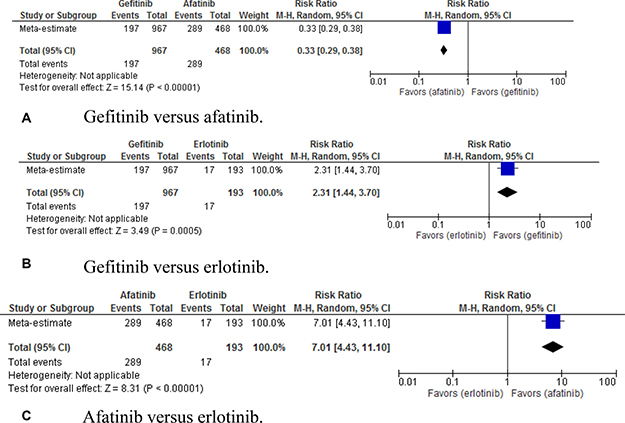 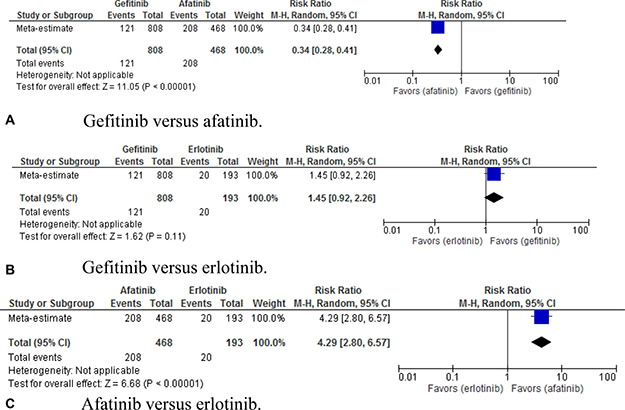 Currently, the landscape of NSCLC treatment is changing. Most recently, the use of EGFR TKI agents for patients harbouring activating mutations of EGFR (exons 18–21) is the standard of care. Several drugs have been approved in this setting, including gefitinib, erlotinib and recently afatinib. In this meta-analysis, gefitinib, erlotinib, and afatinib were superior in terms of objective response rate and progression free survival than platinum-based chemotherapy, but, as expected due to the cross-over effect, there was no statistically significant differences in terms of OS for either of the three drugs. Overall, gefitinib had the most consistent efficacy profile from a statistical point of view, and erlotinib had the best efficacy profile in terms of comparative improvement of PFS.

Our results challenge the recently reported results of LUX-Lung 7 [27], a phase 2b trial comparing afatinib with gefitinib as first-line treatment in patients harboring EGFR mutations, that showed improvement in PFS and ORR with afatinib over gefitinib. Nevertheless, previous meta-analysis [28–30] evaluating first-line therapies of EGFR TKIs in EGFR mutation positive patients had not confirmed the results of this study. Although LUX-LUNG 7 is the only prospective, randomized clinical trial, it also harboured several drawbacks, including the small number of events, the lack of statistical power and the three co-primary endpoints. Our meta-analysis, on the other hand, is a retrospective collective analysis of data, but includes a large number of patients and possesses robust statistical power.

Limitations of our study include its retrospective nature and the indirect comparison between gefitinib, erlotinib and afatinib, since there is a paucity of head-to-head clinical trials, with the exception of LUX-LUNG 7; the high heterogeneity obtained during the data analysis; and the relative paucity of studies evaluating afatinib. Strengths of our study included the large number of patients, the robust statistical design and the broader range of therapies included, as we present data on the three approved first-line drugs.

Future studies are warranted to associate each type of EGFR-activating mutation to the efficacy of a specific treatment and to compare new drugs, as osimertinib, with first and second generation TKIs.

In conclusion, gefitinib, erlotinib, and afatinib are effective in the treatment of NSCLC in terms of progression free survival and objective response rate. Gefitinib had the most consistent efficacy profile from a statistical point of view, and erlotinib had the best efficacy profile in terms of comparative improvement of PFS. As Afatinib still remains the agent with best CSF penetration, we suggest its use is limited to patients presenting with brain metastasis. We suggest the use of Gefitinib in patients without CNS involvement. Faced with the impossibility to dose-reduce Gefitinib, Erlotinib represents a tolerable and effective alternative to Afatinib and Gefitinib if response to EGFR inhibition is considered still effective.

RAM has received honoraria from Pfizer Advisory Board, Zodiac advisory board, AstraZeneca, Novartis, National Science Centre, Krakow, Poland, and educational grant from Pierre Fabre, Amgem. RAM is ad hoc consultant at Ministry of Health, Brasília, Brazil. The other authors have no conflicts of interest in this manuscript. GM has received honoraria from Bristol Myers Squibb, Roche and AstraZeneca.