On the other hand, a growing body of evidence indicates that platelets play an important role in inflammation [7], and are also reported to be important in the development of atherosclerotic lesions as an initial actor [8]. Platelets promoted the mobilization of bone marrow-derived CD34-positive cells into the peripheral blood [9]. Furthermore, platelets not only induce differentiation of CD34-positive cells into endothelial progenitor cells and endothelial cells, but also into foam cells [10, 11] which is a well-known contributing factor in the development of atherosclerotic lesions.

Since the development of atherosclerosis is one aspect of vascular repair, and we previously reported that platelet count indicates the activity of vascular repair (endothelial repair and development of atherosclerosis) [12], studies clarifying the association between height and platelet count and its association with circulating CD34-positive cells might be an efficient tool to evaluate the risk of vascular pathological disadvantages caused by short stature.

In addition to the above, bone metabolism is known to be associated with vascular maintenance [13], and age-related reduction in bone marrow activity is known to cause anemia in the elderly [14]. Additionally, hypertension is a strong endothelial impairment factor, and hemoglobin is known to be positively associated with hypertension [15], atherosclerosis [16], and hypertension-induced vascular damage [17]. Therefore, subjects with low hemoglobin concentration should demonstrate lower vascular maintenance activity, while subjects with a high hemoglobin concentration should show higher activity. Since the aim of our present study was to evaluate the influence of height on activated vascular repair (platelet levels) in elderly men, we conducted a cross-sectional study stratified by hemoglobin level of elderly Japanese men aged 65–69 years who participated in a general health check-up from 2013–2015.

Characteristics of the study population based on hemoglobin status are shown in Table 1. Compared to those with low hemoglobin, high hemoglobin subjects demonstrated significantly higher values for reticulocytes, white blood cells, systolic and diastolic blood pressure, and body mass index.

Table 1: Characteristics of the study population based on hemoglobin levels

Table 2 shows a correlation analysis of hematological parameters, CIMT, and height. For subjects with high hemoglobin, platelets were significantly positively associated with CIMT, circulating CD34-positive cells and white blood cells, and inversely associated with height. We also found a significant positive association between reticulocytes and white blood cells and height, but not CIMT

Association between platelets and height

Table 3: Simple correlation coefficient of platelets and other variables 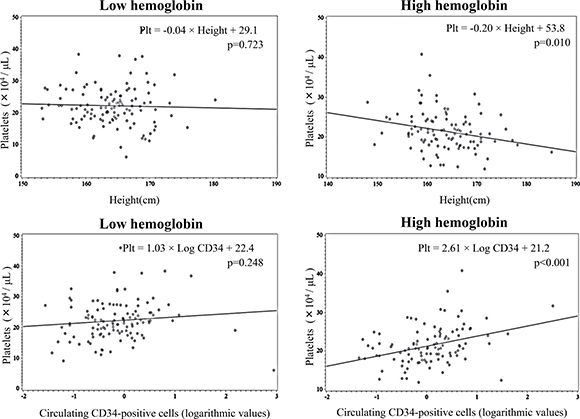 In a previous study, we reported an inverse association between height and high white blood cell count in those with a BMI ≥ 23kg/m2 but not with a BMI < 23 kg/m2 [5]. Since a high white blood cell count, which indicates elevated inflammatory activity, is significantly positively associated with atherosclerosis [4], height may be inversely associated with this disease. In fact, our previous study of Japanese men revealed an inverse association between height and carotid atherosclerosis in overweight (BMI ≥ 25 kg/m2), but not non-overweight (BMI < 25 kg/m2) subjects [2]. In the present study, to evaluate the influence of height on progressive vascular remodeling, further analyses showed no-significant association between height and CIMT for subjects with both high and low hemoglobin; fully-adjusted standardized parameter estimates (β) and p-values were β = −0.001, p = 0.992 for subjects with high hemoglobin and β = 0.11, p = 0.290 for subjects with low hemoglobin. Since our present study population comprised individuals within the normal BMI range (18.5–24.9 kg/m2) our present results are compatible with those of previous studies we conducted [2, 5]. However, atherosclerosis (increased CIMT) is only one aspect of vascular repair (aggressive endothelial repair). Therefore, compared to subjects with a tall stature, subjects with a short stature may show much stronger vascular repair activity (appropriate endothelial repair) even within the normal BMI range.

Endothelial dysfunction has been recognized as one of the initial mechanisms leading to atherosclerosis (increased arterial stiffness) [18]. Platelets are the first circulating blood cells that interact with an injured vessel (injured endothelium) [19]. Platelets usually do not interact with the intact vascular endothelium. Once the arterial endothelium becomes injured, sub-endothelial components such as collagen [20] and von Willebrand factor [21] are exposed, resulting in the adherence of platelets to the damaged vessel wall and their subsequent activation. Activated platelets (P-selectin-positive platelets) release stromal cell-derived factor-1 (SDF-1) [22]. And co-cultivation experiments showed that human platelets recruit CD34-positive cells via specific adhesion receptors P-selectin/PSGL-1 and beta1- and beta2-integrins. This study also reported that platelets induced differentiation of CD34-positive cells into mature endothelial cells and foam cells [11]. Another study reported that Platelet-derived SDF-1 regulates adhesion of stem cells in vitro and in vivo, and the differentiation of CD34-positive cells to endothelial progenitor cells [10].

Since bone marrow-derived endothelial cells such as CD34-positive stem cells support the integrity of the vascular endothelium [23], platelets play an important role in vascular repair not only by serving as “bridging cells” between endothelial progenitor cells and the injured arterial endothelium, but also by inducing the differentiation of CD34-positive cells.

Furthermore, platelet-rich plasma could enhance the proliferation of bone marrow mesenchymal stem cells, which are known to be multi-potent stem cells [24]; and we also previously reported that the number of platelets indicates the activity of vascular repair [12]. Platelets not only indicate vascular repair activity but the degree of endothelial injury as well. In the present study, the positive association between platelets and circulating CD34-positive cells and CIMT of subjects with high hemoglobin might support the above-mentioned mechanism.

However, no such associations were found in subjects with a low hemoglobin level. Bone marrow activity decreases as individuals age [25], which may be associated with the increased frequency of anemia seen in the elderly [14], and bone metabolism is known to be associated with vascular maintenance [13]. In addition, hypertension is a strong endothelial impairment factor and hemoglobin has been revealed to be positively associated with hypertension [15], atherosclerosis [16], and hypertension-induced vascular damage [17]. Therefore, a weak vascular repair response is caused both by an age-related reduction in bone marrow activity and a small degree of vascular injury resulting in a low level of hemoglobin, which might act as a strong confounding factor on platelets as an indicator of vascular remodeling. 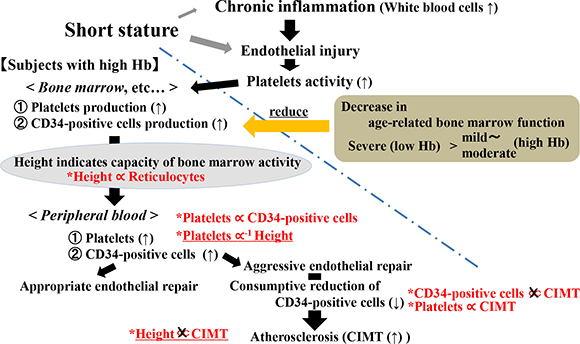 Figure 2: Possible mechanism underlying the association between height and vascular remodeling (endothelial repair). The mechanism below the dotted line is observed only for subjects without severe age-related bone marrow activity reduction (subjects with high Hb). Relations in red were observed in the present analysis. Hb: hemoglobin. CIMT: carotid intima-media thickness.

Although our present study employs a small sample size, it is the largest study in the world that deals with circulating CD34-positive cells among the general elderly population who are selected in a strict manner—subjects were restricted to men in a narrow age and normal BMI range because gender differences, age and high BMI can act as strong confounding factors on the association between height and other variables [30–32].

Potential limitations of this study warrant consideration. Because creatinine clearance data were not available and estimated glomerular filtration rate (GFR) is not an effective tool for evaluating kidney function for a comparison of associations with various body heights [1, 2, 5, 27, 28, 32], we were not able to perform an analysis adjusted for exact renal function. However, our study showed that the association between height and platelet count remained significant even after adjustment for serum creatinine. Although significant associations exist between height and hematological parameters such as platelets and reticulocytes, no data was available with regard to the evaluation of endothelial function. Further analyses that include endothelial function-related data such as Flow Mediated Dilation (FMD) will be necessary. Additionally, because this was a cross-sectional study, causal relationships were not able to be established. However, since height was regarded as a surrogate marker of childhood social and physical condition [1,2,5,6,27,28,32] and the target population in the present study was elderly men, we believe this investigation has the characteristics of a prospective study to a certain degree. Further prospective population based studies are needed to eliminate the possibility of a causal relationships.

In conclusion, a significant inverse association was observed between height and platelet count, while a significant positive association was seen between platelets and circulating CD34-positive cells and CIMT in subjects with a high hemoglobin concentration, but not in those with a low hemoglobin concentration. These results indicate that among elderly Japanese men, those with a short stature activate vascular remodeling much more strongly compared to those with a tall stature.

Participants in this study was essentially voluntary. Written consent forms were available in Japanese to ensure comprehensive understanding, and informed consent was given by all participants. This study was approved by the Ethics Committee for Human Use of Nagasaki University (projects registration number 14051404).

Since hemoglobin value shows a strong positive correlation with body mass index [15, 16], and another study reported a J- or U-shaped correlation between BMI and mortality [33], abnormal BMI status might act as a strong confounding factor for the correlation between height and reticulocyte count. Therefore, to avoid the influence of undernutrition and hyper-nutrition, subjects with a BMI < 18.5 kg/m2 (n = 50) and BMI ≥ 25 kg/m2 (n = 103), respectively, were excluded. Subjects with no evaluable laboratory data (n = 1) and with no CD34-positive cell count data available (n = 30) were also excluded, leaving a total of 219 subjects participating in the study.

Measurement of CIMT by ultrasonography of the left and right carotid arteries was performed by an experienced vascular technician using a LOGIQ Book XP with a 10-MHz transducer, GE Healthcare, Milwaukee, WI, USA). Mean values for the left and right CIMT were calculated using automated digital edge-detection software (Intimascope; MediaCross, Tokyo, Japan), with the protocol described in detail elsewhere [35].

Characteristics of the study population stratified by hemoglobin levels were expressed as mean ±standard deviation. Simple and partial correlation analysis (Pearson) adjusted for known cardiovascular risk factors were performed to evaluate hematological parameters, CIMT and height. Simple correlation coefficients of platelets and other variables were calculated. Multiple linear regression analyses were also performed to evaluate the same. Since inter-correlation with systolic blood pressure was r = 0.72 (P < 0.001), diastolic blood pressure was not analyzed as a confounding factor. Because circulating CD34-positive cells, triglycerides, γ-GTP, and serum creatinine had a skewed distribution, logarithmic transformation was performed for the simple and partial correlation analysis, and linear regression analysis. All statistical analyses were performed with the SAS system for Windows (version 9.4; SAS Inc., Cary, NC). Probability values of less than 0.05 were considered to be statistically significant.

We are grateful to the staff of Goto city office and Saza town office for their outstanding support.