The association of 5HT2A and 5HTTLPR polymorphisms with Alzheimer’s disease susceptibility: a meta-analysis with 6945 subjects

Alzheimer’s disease (AD), characterized by progressive memory and language impairment, cognitive deficits, and other behavioral and psychological symptoms of dementia (BPSD), is a progressive neurodegenerative disorder [1–2]. The mechanism of AD is complex and not well known yet. Apart from environment factors such as education level and life style, genetic contribution may partly determinate the risk of AD [3–5]. The well-studied genetic risk factor for AD should be the apolipoprotein E (APOE) ε4 allele. It was suggested to be a susceptible factor to both familial and sporadic AD [6–8]. However, this variant accounts to only part of genetic susceptibility to AD [9]. Therefore, further gene polymorphisms may confer additional risk to develop AD.

Serotonin (5-hydroxytryptamine, 5-HT) is a key neurotransmitter involved in many aspects of psychological processes including mood, aggression, impulsivity, and anxiety in human and animal [10–13]. Serotonin dysfunction has been implicated in many psychiatric diseases including AD [14]. The action of 5-HT is mediated by 5HT receptors. Multiple 5-HT receptors have been identified. Increasing evidences suggest that 5-HT receptors especially 5HT2A and 5HT1A have impartment role in the development of AD [15–17]. In addition, large number of neurobiological researches have suggested a decrease in density and specific binding of the 5HT2A receptor in AD patients’ brain [18–19]. Following 5-HT release, the serotonin reuptake transporter (5-HTT) is thought to be the principal regulation site of the serotonin levels by facilitating reuptake of 5-HT from the synaptic cleft to its receptors in the central nervous system [20]. The 5-HTT may therefore be also involved in the pathogenesis of AD.

Polymorphisms in the serotonin-related genes were demonstrated to be associated with the risk of AD in recent studies. The most commonly and widely studied polymorphisms should be the 5-HT2A (C102T) and SLC6A4 (5HTTLPR) [21–23]. The 5HT2A C102T is a variant change in exon 1 that does not alter the serine at position 34 and was shown to contribute to lower transcriptional activity than the 5HT2A 102C [24]. Increasing case-control studies have investigated the association of 5-HT2A C102T and AD and reported conflict results. While, most of the studies revealed negative results [21, 25–26]. As for 5-HTTLPR, an insertion or deletion of a 44-bp fragment in the promoter region of 5-HTT gene (SLC6A4), was found to regulate 5-HTT promoter activity by cAMP and protein kinase C [27, 29]. The short (S) allele (deletion) is associated with a lower rate of 5HTT transcription than the long (L) allele (insertion) and therefore may reduce 5HT reuptake capacity and lead to alterations in serotonergic neurotransmission [28, 30]. The genetic correlation of 5-HTTLPR (L/S) and AD was firstly identified by Li et al. in British population [31]. However, this positive result can only be replicated in several Caucasian populations [32–33], but not in Asian populations [34–36]. These discrepancies may be due to insufficient calculated power, different ethnicities, and limited sample sizes in individual studies.

In light of these controversial and inconclusive observations, we conducted a meta-analysis to investigate the possible role of 5-HT2A (C102T) and 5HTTLPR (L/S) polymorphisms in susceptibility of AD.

Characteristics of the published studies 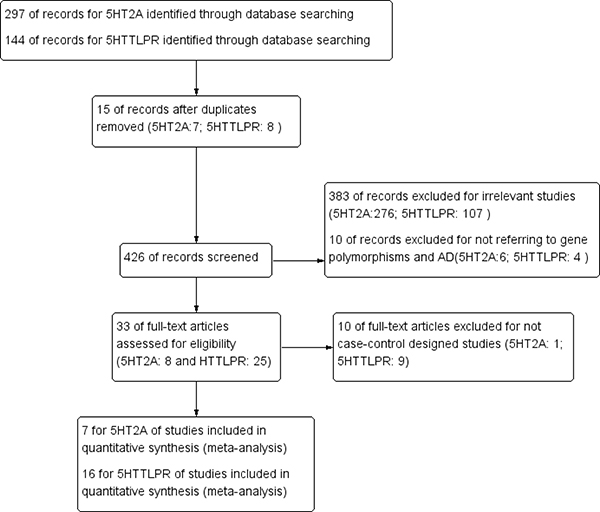 Table 1: Characteristics of eligible studies included in the meta-analysis

Table 2: The association between 5HT2A C102T and Alzheimer’s disease 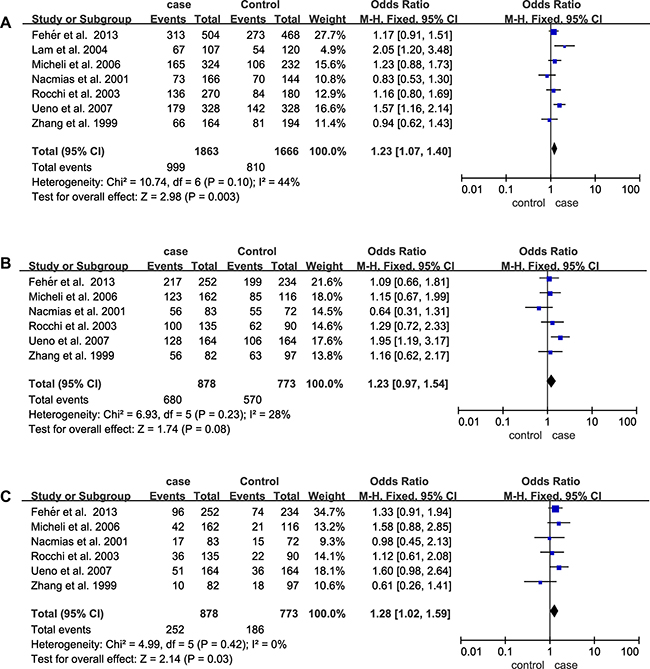 Figure 2: Forest plots of odds ratios for the association between 5HT2A C102T and AD. (A) Allelic model; (B) Dominant model; (C) Recessive model.

Table 3: The association between 5HTTLPR and Alzheimer’s disease 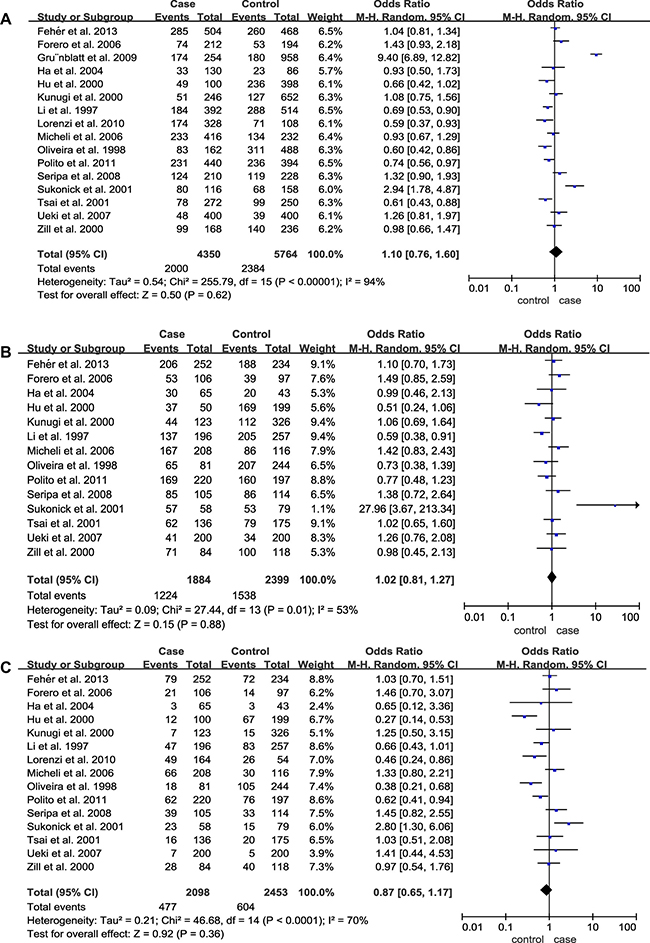 Figure 3: Forest plots of odds ratios for the association between 5HTTLPR (L/S) and AD. (A) Allelic model; (B) Dominant model; (C) Recessive model.

Considering the great heterogeneity among studies, the random-effect model was applied. Heterogeneity was found for the 5HT2A allelic and recessive models of 5HT2A C102T and AD in Asian subgroup and subgroups without APOE ε4 (Table 2). The heterogeneity in this polymorphism was contributed mainly by Zhang et al. Removal of this study from meta-analysis gave 0% (p > 0.05) (Allelic contrast: Asian: p = 0.40; APOE ε4+: not available (NA); recessive model: Asian: NA; APOE ε4+: NA) heterogeneity and the result remained none significant, which showed that it had the highest effect on the correction of 5HT2A and AD. Furthermore, subgroup analysis stratified by ethnicities and APOE ε4 was performed and showed no obvious difference (Ethnicity: p = 0.1; APOE ε4: p = 0.55), implying that the ethnicity and APOE ε4 exerted no influence on the association between the 5HT2A C102T polymorphism and risk of AD.

Significant heterogeneities were also found in allelic, dominant, and recessive models of 5HTTLPR (L/S) (Table 3). The heterogeneity in this polymorphism was contributed mainly by Sukonick et al., Gru¨nblatt et al., and Tsai et al. Removal of these studies from meta-analysis gave 0–47% heterogeneities (p > 0.05). And subgroup analysis stratified by ethnicity and APOE ε4 was performed and showed no obvious difference (Ethnicity: p = 0.11; APOE ε4: p = 0.40), implying that the ethnicity and APOE ε4 exerted no influence on the association between the 5HTTLPR (L/S) polymorphism and risk of AD.

Sensitivity analysis which excluded the influence of a single study on the overall risk estimate by excluding one study at a time was confirmed. The ORs were not significantly altered in 5HT2A C and 5HTTLPR L (Figure 4). These evidences indicated that the present results were statistically stable and reliable. Funnel plots and Egger’s test were performed to assess publication bias. The results revealed that there was no obvious publication bias in overall analysis for 5HT2A C (pegger=0.955) and 5HTTLPR L (pegger=0.924) (Figure 5). The shape of Begg’s funnel plot did not reveal any obvious asymmetry (Figure 5), 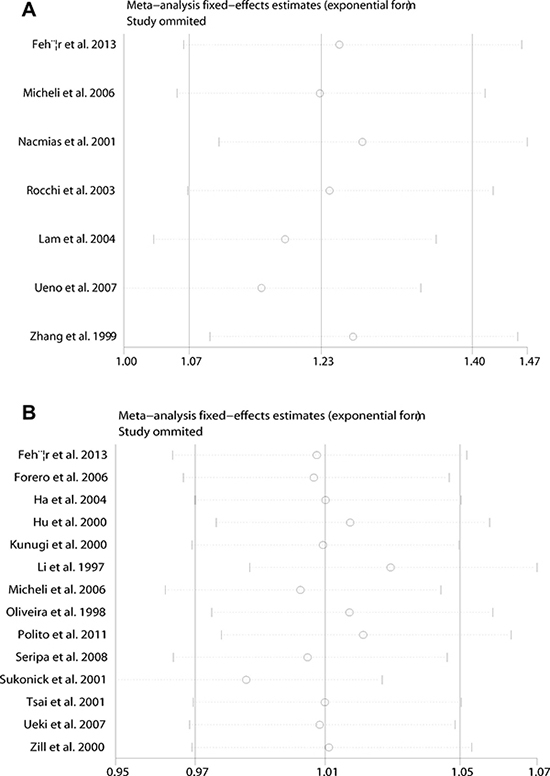 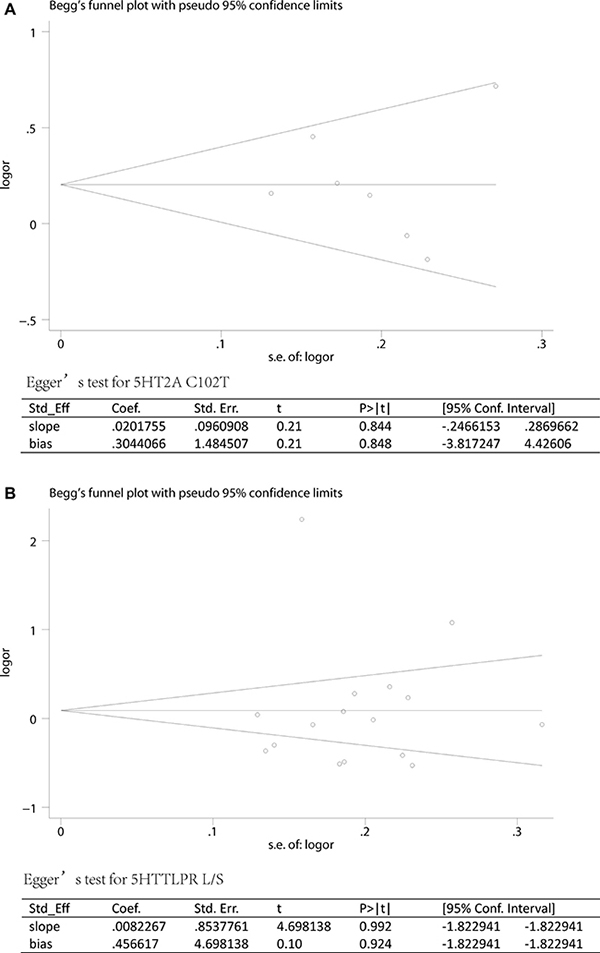 The combined results in this meta-analysis indicated that the allelic and dominant models of 5HT2A C102T were significantly associated with increased risk of AD among Asians and patients without APOE ε4. However, the present study failed to prove the hypothesis that the 5HTTLPR (L/S) was associated with AD.

The 5HT2A gene, which codes for the serotonin receptor type 2A, is located at 13q14-q21 [48]. The C/C genotype of 5HT2A C102T carriers showed a significant, 2-fold increased risk when compared to those who carrying the C or the T allele [49]. Increasing evidence revealed the 5HT2A C102T was a risk factor in many psychiatric diseases such as bipolar affective disorder, schizophrenia, AD, as well as BPSD in AD [50–52]. The results of the meta-analysis revealed significant associations between the allelic and dominant models of 5HT2A C102T and AD, However, the exact biological mechanism that the 5HT2A gene polymorphisms influence susceptibility to AD remains unclear. Subgroup analysis stratified by ethnicities revealed the AD risk increased significantly for allelic and dominant models of 5HT2A C102T in Asian population. Notable, three studies [25, 38–39] investigated the association between 5HT2A C102T and AD in Asian population. And two of them observed negative results. This discrepancy in individual studies and combined analysis may due to the limited sample size in individual studies. Furthermore, the subgroup analysis stratified by APOE ε4 in the present meta-analysis also indicated the allelic and dominant models of 5HT2A C102T increase the risk of AD in subgroup without APOE ε4. However, there were only two studies [38–39] included in subgroup analysis, which might cause insufficient power to detect slight association. To identify the 5HT2A C102T to be a specific risk factor for AD in Asian subjects and subgroup without APOE ε4, future larger-scale studies are necessary.

Nonetheless, limitations also need to be acknowledged in our meta-analysis. Firstly, we enrolled a particularly small number of studies analyzing for association between the 5HT2A C102T and AD (7 case-control studies), which may result in an insufficient power for identifying relationship of 5HT2A C102T and AD risk. Secondly, we involved only Asian and Caucasian populations in the present study. Other populations such as African were not included. However, we could not assess the association in African population for lack of studies. Therefore, future studies on various ethnicities are needed. Thirdly, further subtle adjusted analysis by other co-variants such as ages, gender, education level, and life style should be carried out to obtain a more precise evaluation. Fourthly, AD was a progressive neurodegenerative disease with age and gender bias. It is necessary to analysis the genetic association between the 5HT2A (C102T) and 5HTTLPR (L/S) in subgroups stratified by age or gender.

In conclusion, our meta-analysis suggests that 5HT2A C102T may increase susceptibility to AD in Asian population and subgroup without APOE ε4 in both allelic and dominant models. And, the 5-HTTLPR (L/S) might not be the risk factor for AD. However, large-scale studies with more subjects are warranted to confirm these findings.

This meta-analysis followed the Cochrane collaboration definition and PRISMA 2009 guidelines for meta-analysis and systematic review. Literatures search on PubMed, Embase, Web of Science, the Cochrane Library databases and Chinese National Knowledge Infrastructure (CNKI) was performed to investigate all relevant publications exploring the relationship between 5HT2A and 5HTTLPR polymorphisms and the risk of AD (up to June 1, 2017). The search terms were following: “5HT2A” or “neurotransmitter 5 hydroxytryptophan 2A Receptor” or “serotonin receptor 2A” or “serotonin 2A Receptor” or “HTR2A” and “polymorphism” or “variant” or “gene mutation” “single nucleotide polymorphism (SNP)” or “gene variation” and “Alzheimer’s disease” or “AD” and “promoter region of the serotonin transporter gene” or “5HTTLPR”. No language was limited. Meanwhile, other potentially relevant literatures were identified by cross-references within eligible studies.

1) Investigating the association between 5HT2A (C102T), 5HTTLPR (L/S) polymorphisms and susceptible of AD. 2) The study was case-control and/or cohort designed. 3) Sufficient published data for calculating an odds ratio (OR) with 95% confidence interval (CI). 4) The genotype distributions in control groups were in the Hardy-Weinberg equilibrium (HWE).

Data abstraction was performed independently by L. T. and Y. W. The following information from each study was summarized: first author, year, ethnicity, numbers of cases and controls, mean age and gender, methods of genotyping, sample source, Hardy-Weinberg equilibrium (HWE) for control groups. All included studies were evaluated using the Newcastle-Ottawa Scale (NOS) independently by L. T. and Y. W. C. Any discrepancies in the assessment were resolved by J. M. L.

The odds ratio (OR) and 95% confidence interval (95% CI) were calculated for evaluating the association between 5HT2A T102C, 5HTTLPR L/S and AD using the RevMan 5 (Oxford, UK) and STATA12.0 (StataCorp, College Station, TX, USA). The pooled ORs were calculated in the allelic, dominant and recessive models. The statistical significance of the OR was determined using the Z test. Statistical heterogeneity was tested using χ2-based Q test and the I2 statistic. When there was no significant heterogeneity across studies (I2 < 50%), the fixed effect model (Mantel-Haenszel method) was used for meta-analysis. Otherwise, the random effect model (the DerSimonian and Laird method) was used. Sources of heterogeneity were evaluated by stratification analysis of ethnicities and APOE ε4 allele, according to the study characteristics. Sensitivity analysis was performed to assess the stability of results. The publication bias was detected with Begg’s test and Egger’s test. p < 0.05 was considered statistically significant.