Intussusception is a condition in which part of the intestine slides into an adjacent section [1]. It is one of the most common causes of bowel obstruction in children. Intestinal ischemia-reperfusion (I/R) injury can occur during intussusception. Early-stage I/R injury can result in mucosal erosion and hemorrhagic ulceration. These complications can frequently be reversed by treatment with vasodilators [2].

Inflammatory cytokines promote I/R injury during intussusception. Toll-like receptor 4 (TLR4) is a member of the Toll-like receptor (TLR) family of cell surface receptors. It functions in pathogen recognition and activation of the inflammatory response. Binding of ligands to TLR4 induces activation of the p38 mitogen-activated protein kinase (MAPK) pathway, which regulates the inflammatory immune response, cell survival, and cell death [3]. Several studies have demonstrated that TLR4 is involved in lung and intestinal I/R injury, but the role of TLR4 in has not been elucidated [4–6].

Ultraviolet-visible near-infrared (UV-Vis-NIR) absorption and photoluminescence spectra of the TLR4 antibody-labeled QDs revealed a peak at 1,080 nm. The first absorption peak appeared at 980 nm, with a full width at half maximum (FWHM) of 137 nm (Figure 1A). 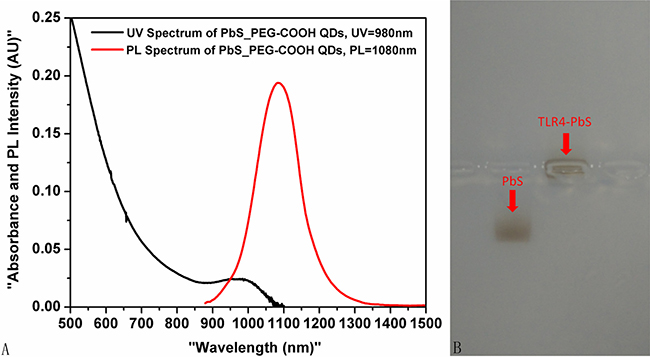 Agarose gel electrophoresis indicated that the TLR4-PbS QDs were larger and migrated more slowly than the unconjugated PbS QDs (Figure 1B).

We established a mouse model of I/R injury during intussusception (n = 12). Soft tissue masses were visible in the intestines of all 12 mice consistent with bowel obstructions. Small obstructions, and areas of vascular compromise and venous congestion, were observed within 60 min of the onset of intussusception. We then reduced the intussusception and allowed reperfusion to occur for 90 min. Areas of vascular compromise and small bowel obstruction worsened following reperfusion. Histological analysis demonstrated an increase in inflammation and the number of necrotic areas in the I/R injury compared to control group.

Figure 2: NIR-II fluorescence images of living mice 30 min after administration of an 0.15 mL bolus of the TLR4-PbS QDs in the intestinal I/R injury (A), control (B), and TAK-242 (C) groups. 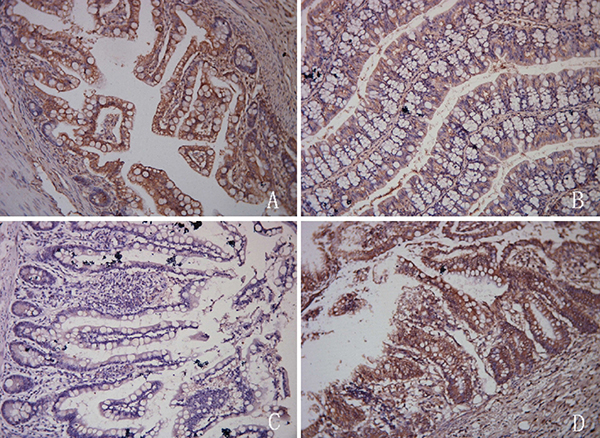 Figure 8: Ex vivo NIR-II fluorescence images of liver and intestinal tissue from mice 30 min after administration of the TLR4-PbS QDs. Higher TLR4 expression was observed in the intestinal I/R injury (A) compared to control (B) and TAK-242 (C) groups.

We evaluated the specificity of TLR4-CdSe QDs for TLR4 in an in vitro cell culture model of intestinal I/R injury. We observed a stronger fluorescence signal in the TLR4-CdSe QD compared to control (untreated) and CdSe QD groups. We then pretreated the cells with TLR4 for 30 min and evaluated the fluorescence in the I/R injury compared to control group (Figure 9). These results indicated that the TLR-CdSe QDs bound TLR4 with high specificity. 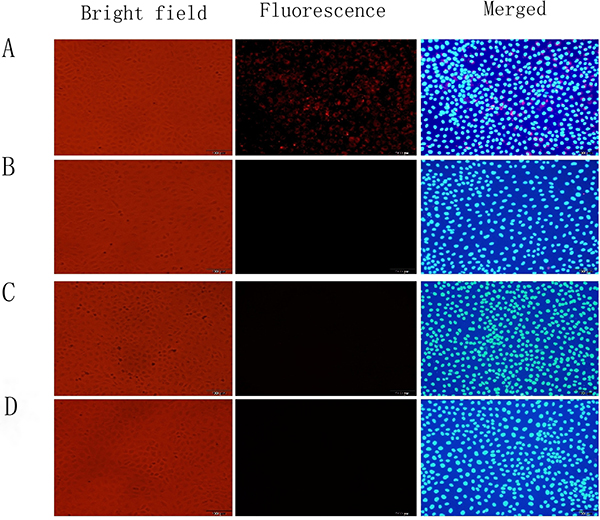 Figure 9: Immunofluorescence analysis of TLR4-CdSe QD binding activity in an in vitro model of intestinal I/R injury. Positive TLR4 expression on the cell membranes of intestinal epithelial cells in the I/R injury model (A). No staining of TLR4 was observed in the QD (B), control (C), and TLR4-treated (D) groups.

The restoration of blood supply to ischemic tissues can result in activation of an acute inflammatory response leading to additional tissue damage. Previous studies have demonstrated that TLR4 can activate the MAPK and NF-kB pathways, which are critical regulators of the inflammatory response, cell survival, and apoptosis [3]. We previously observed high p38 MAPK expression in response to I/R injury [18]. Additionally, Ben et al. demonstrated that TLR4 plays an important role in acute lung injury following intestinal ischemia [6].

Antibodies conjugated to fluorescent probes such as QDs have been developed as non-invasive molecular imaging tools [15, 21]. Li et al. reported that fluorescent imaging of NIR-II probes is advantageous because it can achieve high contrast and facilitate deep-tissue imaging [20, 22]. Thackeray et al. developed a gallium-68 pentixafor to image the chemokine receptor CXCR4 in the myocardium following myocardial infarction using PET [23].

We investigated whether TLR4-PbS QDs could be used to detect and monitor intestinal I/R during intussusception. The TLR4-PbS QDs localized to areas of tissue damage in a mouse model of I/R injury during intussusception. The TLR4 QDs bound to TLR4 with high specificity both in vitro and in vivo. Our findings are consistent with those of two previous studies [15, 24]. Li et al. demonstrated that Ag2S QDs allowed in vivo monitoring of lymphatic drainage and vascular networks, and enabled targeted delivery of nanodrugs that prevent osteolysis to metastatic bone tumors. The Ag2S QDs demonstrated improve tissue penetration depth and enhanced spatiotemporal resolution [25, 26]. We have demonstrated that TLR4-PbS QDs may be useful for ultrasensitive NIR-II fluorescence imaging in vivo [27].

where Ф is the quantum yield, I is the measured integrated emission intensity, η is the refractive index of the solvent, and A is the optical density. The subscript “st” refers to the standard with known quantum yield and “x” refers to the QD sample. Fluorescence spectra were measured at excitation wavelengths below 785 nm. IR-26 dye dissolved in 1,2-dichloroethane was used as a reference.

Conjugation of an anti-TLR4 antibody to QDs

Water-soluble, NIR-emitting PbS QDs were purchased from Mesolight Inc. (Suzhou, China). The particles were coated with polyethylene glycol (PEG) modified with carboxylic acid to ensure colloidal stability and solubility in an aqueous environment. The QDs were obtained as a 6 μM stock solution dissolved in sodium borate buffer (10 mM, pH = 7.4). We conjugated the anti-TLR4 antibody to the QDs as described previously [28]. Briefly, QDs capped with PEG-COOH were dissolved in 10 mM sodium borate reaction buffer (pH 7.4) to a final concentration of 1 μM. A total of 50 μL of the TLR4 antibody (Mouse monoclonal ,Abcam, USA) was then added to the QDs while vortexing. A 10 mg/mL stock solution of 1-ethyl-3-(3-dimethylaminopropyl) carbodiimide in water was prepared and 50 μL of the solution immediately added to the reaction mixture. The reaction was incubated for 2 h at room temperature with gentle mixing. Following the incubation, the solution was centrifuged at 13,000 rpm with a MicrosepTM Advance Centrifugal Device (YM-100KD, Pall Corporation, Port Washington, NY, USA) for 10 min to remove free antibodies. TLR4-PbS QDs were recovered in 300 μL 1× phosphate-buffered saline containing 0.05% sodium azide and stored at 4°C until use.

The study protocol was approved by the Institutional Ethics Review Committee of the Children’s Hospital of Soochow University. All experiments were performed in accordance with the institutional guidelines for the use of animals and human tissue in experiments. A total of 18 nude mice (a mixture of male and female, 4–6 weeks old, 15–20 g) were included in the study. The mice were divided into experimental (n = 12) and control (n = 6) groups. To evaluate the binding specificity of the TLR4-PbS QDs for TLR4, we further divided the mice in the experimental group into I/R injury (n = 6) and TAK-242 (n = 6) groups. TAK-242 (3 mg/kg), a specific inhibitor of TLR4, was administered intraperitoneally 60 min prior to intussusception. Intussusception was established under ether inhalation anesthesia as described previously [18]. Intussusception was observed in all mice in the I/R injury and TAK-242 groups after 60 min. Reperfusion was allowed to proceed for 90 min.

In vivo whole-body and ex vivo fluorescence imaging of organs and tissues was performed with a customized NIR-II fluorescence imaging system (Suzhou Institute of Nano-Tech and Nano-Bionics, Chinese Academy of Sciences, China) equipped with an 808 nm diode laser (880 nm long-pass filter). The distribution of the TLR4-PbS QDs in living mice was monitored in real-time and images acquired continuously (50 mW/cm2 power, 100 ms exposure time). TLR4-PbS QDs were administered as a 0.10–0.15 mL bolus via the tail vein. Dynamic contrast-enhanced images were obtained 1 min, 15 min, 30 min, 45 min, 60 min, and 90 min after injection. Regions of interest within the intestine were identified using markers that were placed on the skin during the intussusception procedure. Images were analyzed using MATLAB.

In vitro model of I/R injury

IEC-6 non-transformed rat intestinal epithelial cells (CRL-1592; EK-Biosciences, China) were maintained in Dulbecco’s Modified Eagle’s Medium supplemented with 10% fetal bovine serum, 2 mM glutamine, 1% penicillin, and 1% streptomycin at 37°C in an incubator with a humidified atmosphere containing 5% CO2/95% air. Experiments were performed on cells between passages 17–25. An in vitro model of intestinal I/R injury was established by culturing cells under conditions of hypoxia followed by reoxygenation. Cells were placed in a hypoxic chamber with 1% O2 /5% CO2 /94% N2. Reoxygenation was then allowed to occur for the indicated time periods [29]. We evaluated the binding specificity of TLR4 antibody-conjugated cadmium selenide (CdSe) QDs (TLR4-CdSe QDs) for TLR4 by comparing the fluorescence intensity in cells treated with TLR4-CdSe QDs to those treated with CdSe QDs using confocal microscopy. We then pretreated the I/R injury cell model with TLR4 for 30 min at room temperature, and compared the fluorescence intensity of the TLR4-CdSe QDs to unconjugated CdSe QDs.

The study protocol was approved by the Institutional Ethics Review Committee of the Children’s Hospital of Soochow University. All experiments were performed in accordance with the institutional guidelines regarding the care and use of animals and human tissues in experiments.

This research was supported by Jiangsu Province Health and Family Planning Projects (H201519 and H201520), Fundamental and Application Research in Health Care of Suzhou (SYS201762), and Jiangsu Province Social Development Program - Standardized Diagnosis and Treatment of Key Diseases in the Clinic (#BE2015643).