UBASH3B promotes tamoxifen resistance and could be negatively regulated by ESR1

Results: High expression of UBASH3B is negatively correlated with distant metastasis free survival (DMFS, P = 0.01, P = 0.045, P = 0.04 in 2 independent datasets and a merged dataset, respectively), disease specific survival (DSS, P = 0.028) and disease free survival (DFS, P = 0.0052, P = 0.011, P = 0.016 in 3 independent datasets, respectively) in ER+ breast cancer patients. Subset analysis found that UBASH3B also has prognostic value on both lymph node positive and negative sub-populations with ER+ breast cancer. This study also demonstrates that UBASH3B expression is tightly associated with tamoxifen resistance and TP53 mutation, which explains the association between UBASH3B and poor prognosis of ER+ breast cancer. Further analyses show that the expression of UBASH3B is affected by promoter methylation and copy number loss. Besides, UBASH3B is inversely correlated with ER and down-regulated by ER. Importantly, we find cisplatin could be a therapeutic option targeting on UBASH3B in clinical settings.

Breast cancer is the most common malignancy and the leading cause of cancer death in females worldwide [1]. The number of cases has significantly increased since the 1970s, a phenomenon partly attributed to the wide use of menopausal hormone therapy and increased breast cancer screening [2]. It is estimated that there would be 231840 new cases and 40290 deaths of female breast cancer in the United States in the year 2015 [3].

Among all types breast cancer, over 70% are ER positive (ER+) according to molecular subtyping based on therapeutic regimens [4]. The selective ER modulator tamoxifen forms a central modality in the treatment of ER+ breast cancer, and demonstrates remarkable efficacy especially in patients with early breast cancer. However, approximately 40% patients with ER+ breast cancer are insensitive to tamoxifen treatment and even for those patients who show response initially would become refractory to tamoxifen-directed therapy ultimately, requiring physicians to consider how to better initiate the next step in therapy [4]. One of the key challenges Physicians facing today is to identify of patients best suited for and most likely to respond to each drug. Finding new predictive biomarkers and targets to enhance tamoxifen sensitivity and moreover reverse the resistant phenotype in ER+ breast cancer remain critical goals.

UBASH3B, also called Suppressor of T-Cell Receptor Signaling 1 (STS-1), could promote accumulation of epidermal growth factor receptor (EGFR) on the cell surface by inhibiting degradation of EGFR [5]. Recently, Lee et al. showed that UBASH3B was overexpressed in Triple Negative Breast Cancer (TNBC), where it supported cancer proliferation, invasion, and metastasis largely through up-regulation of epidermal growth factor receptor (EGFR). They also demonstrated that UBASH3B is a functional target of microRNA200a (miR200a) that is down-regulated in TNBC, which they thought could explain why UBASH3B is overexpressed in TNBC [6]. This is a great success in searching for potential therapeutic targets and management of TNBC. Nevertheless, they left several important questions unanswered.

The goal of the present study was to clarify the prognostic value of UBASH3B in ER+ breast cancer and elucidate its association with tamoxifen efficacy. We also sought to uncover new regulators of UBASH3B and search for available chemotherapeutics that could target UBASH3B and enhance tamoxifen sensitivity.

To deduce the potential role for UBASH3B in ER+ breast cancer, gene expression analysis based on publicly available datasets was performed. Interestingly, high expression of UBASH3B was closely associated Distant Metastasis Free Survival (DMFS) in Van dataset and GSE6532 (Figure 1A, left and middle graph, P = 0.01 and 0.045, respectively) and a merged dataset (Figure 1A, right graph, merged by GSE1456 and GSE3494, P = 0.04). Subset analysis indicated that UBASH3B expression was also correlated with DMFS of both lymph node – (Figure 1B, left, P = 0.015) and lymph node + (Figure 1B, right, P = 0.046) patients with ER+ breast cancer in Van dataset. These results indicate an association between UBASH3B and distant metastasis of ER+ breast cancer. 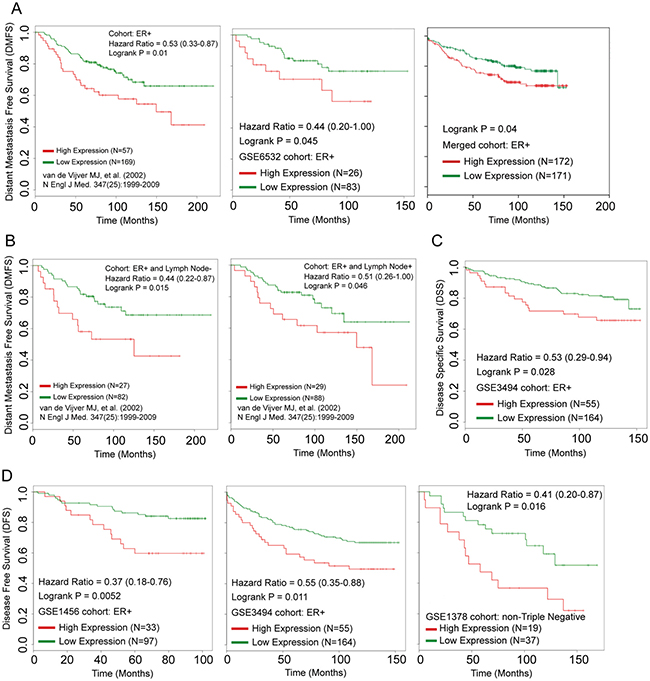 Taken together, these findings suggest a potential role of UBASH3B in the progression of ER+ breast cancer.

Overexpression of UBASH3B is correlated with tamoxifen resistance and TP53 mutation 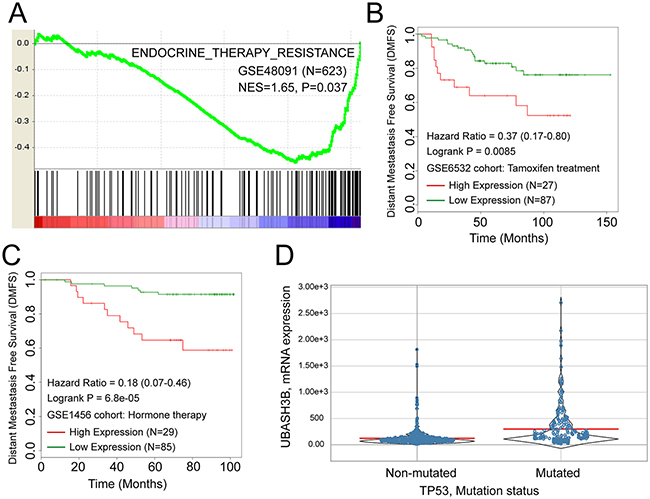 These results indicate that UBASH3B overexpression is correlated with tamoxifen resistance and TP53 mutation.

Findings in previous sections show potential roles of UBASH3B plays in the progression and tamoxifen resistance in ER+ breast cancer. Next, we sought to the factors that could influence the expression of UBASH3B. Datasets from TCGA and GEO were used in the analyses. The results indicated that UBASH3B mRNA expression is inversely correlated with its methylation levels (Figure 3A) and copy number variation (Figure 3B). Interestingly, we found mRNA expression of UBASH3B is also negatively correlated with ESR1 protein levels (Figure 3C), thereby a critical question arises. Could ESR1 regulate the expression of UBASH3B? Here we show that UBASH3B mRNA expression is 16 fold higher in ER knock down MCF-7 cells than in parental controls (Figure 3D). Data also suggests that this negative regulation is associated with estrogen stimulation. In long term estrogen deprived conditions, UBASH3B expression in day 30 is about 4 fold higher compared to day 0 (Figure 3E). These observations show that ER is a crucial negative regulator of UBASH3B expression. 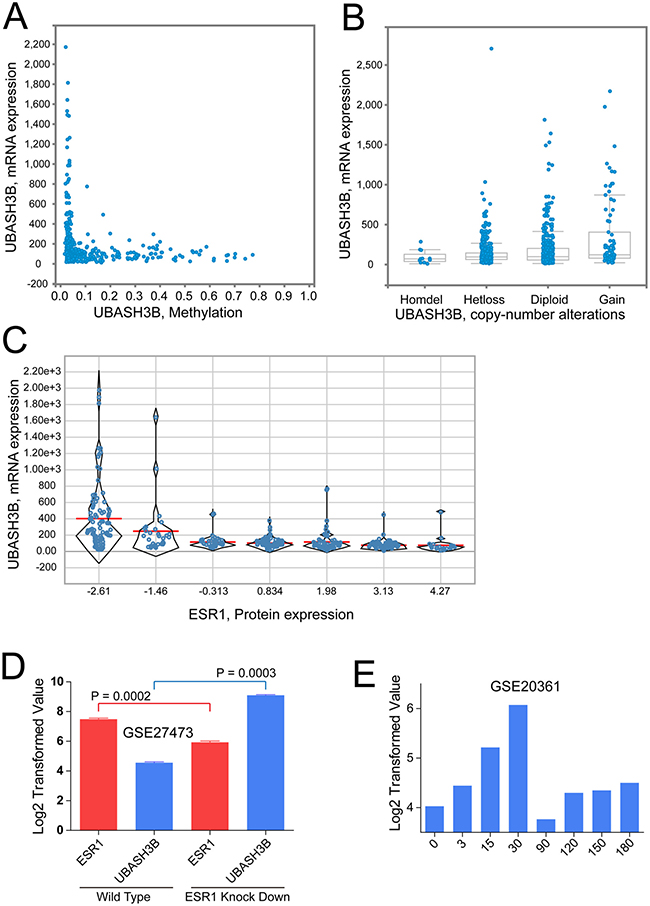 Although tamoxifen has been successfully used in the management of patients with ER+ breast cancer, resistance is a common problem that ultimately culminates in treatment failure. Identification of predictive biomarker of tamoxifen resistance and targets to enhance its sensitivity is more and more important in the years to come.

UBASH3B contain an SH3 domains and could promote cancer progression by targeting CBL ubiquitin ligase for dephosphorylation and inactivation, which in turn leads to up-regulation and accumulation of activated EGFR [5]. Recently, Lee et al. reported that UBASH3B was overexpressed in TNBC and confers poor overall survival in patients with ER- breast cancer, but no significant disadvantage in patients with ER+ breast cancer [6]. In the present study, we demonstrate that high expression of UBASH3B is associated with poor prognosis of ER+ breast cancer and tamoxifen resistance. Furthermore, the expression of UBASH3B is inversely correlated with its methylation levels and copy number variation. Interestingly, our result also indicates that UBASH3B expression is negatively regulated by ER and this regulation is associated with estrogen stimulation. Since tamoxifen functions largely as agonist in molecular level and could recapitulate the gene expression profile induced in breast cancer cells by estrogen [18], here we hypothesized that UBASH3B expression is negatively regulated by tamoxifen through activating ER signaling pathway in tamoxifen sensitive patients while not in tamoxifen refractory patients, which can perfectly explain the correlation between UBASH3B expression and tamoxifen efficacy.

In an effort to find available chemotherapeutics that could be used in adjuvant setting for the management of breast cancer patients with high expression of UBASH3B, data mining from The Comparative Toxicogenomics Database (CTD) was performed [19]. Our result suggests that cisplatin is a potential therapeutic option that could down-regulate the expression of UBASH3B and enhance tamoxifen sensitivity.

Finally, the overview of UBASH3B signaling pathway was demonstrated in Figure 4. This diagram shows that UBASH3B is down-regulated by ER and cisplatin and can promote breast cancer progression through EGFR. The effect of UBASH3B on cancer progression may be enhanced by the co-existence of TP53 mutation. 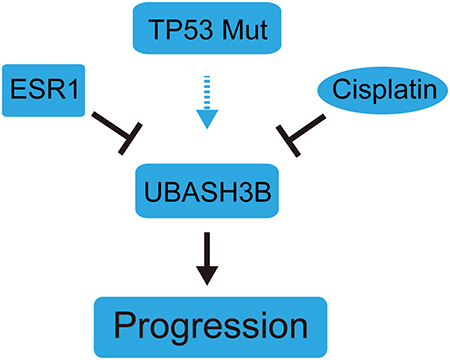 Taken together, we suggest that UBASH3B expression levels could be used for patient stratification and directing personalized therapies. Cisplatin is a potential therapeutic option that may be used in combination with tamoxifen to enhance the sensitivity of tamoxifen. Nevertheless, in vivo and in vitro experiments and randomized controlled clinical trials are still needed.

We are free to use breast cancer data in the cancer genome atlas (TCGA) by meeting its freedom-to-publish criteria: A marker paper has been published on that tumor type. We have the right to use datasets from Gene Expression Omnibus (GEO) by complying with all requirements according to each dataset. The Research Ethics Committee of Zhejiang Provincial People’s Hospital waived the requirement for ethical approval of this analysis because the registry is a de-identified database. Written consent was obtained from all alive patients.